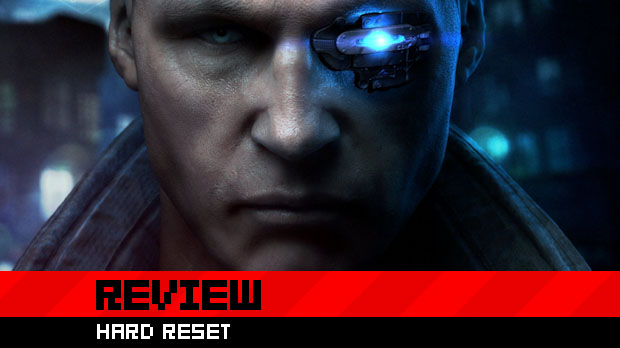 What happens when former Bulletstorm and The Witcher 2 developers club together to make a first-person shooter about insane robots? Well, if Hard Reset is anything to go by, you get something very promising indeed.

Hard Reset has gained attention for its bold visual style and hardcore gameplay, but being a brand new IP in the PC indie market, it was always going to be a hit-or-miss risk. Fortunately, it’s a risk that has most certainly paid off. 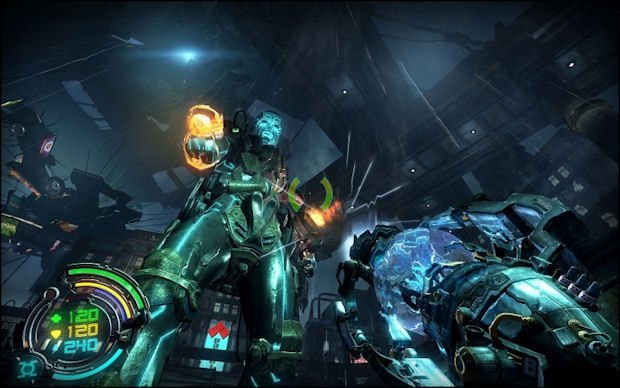 Those who have played Hard Reset will talk about its difficulty, but by far the hardest aspect of the game is working out what on Earth it’s supposed to be about. Fully voiced comic book cutscenes open each level to present the narrative, but it’s rather impregnable stuff. There’s something about a “company” and artificial intelligence, with the robotic enemies that make up the entire game seeming to factor very little into the actual plot. I found the cutscenes annoying after a while, as they didn’t really add anything to the game, and served only to waste time between cybernetic killing sprees.

In all truth, any narrative element can be quite safely skipped and nothing will be missed. It is but a distraction from the real point of the game — intense combat against hundreds of violent robots. In this endeavor, Flying Wild Hog has most assuredly delivered. As is quite fitting for former members of People Can Fly, Hard Reset bears many similarities to the classic PC shooter Painkiller, presenting as it does hordes of swarming enemies with little else getting in the way of its over-the-top, adrenaline-pumping combat.

Hard Reset brings back the ideal of the “old school” shooter. Cover, regenerating health, and the fancy gimmicks of the modern shooter have been cast aside in favor of a game that focuses exclusively on the very fundamentals that made first-person-shooters what they are. It also resurrects the tough gameplay that such an era was known for. Hard Reset‘s robots are among the most vicious, aggressive enemies I’ve ever fought in a game, as they unrelentingly chase players through entire levels, swarm in droves, and deal plenty of damage to boot. Playing on Normal will offer some hefty resistance. 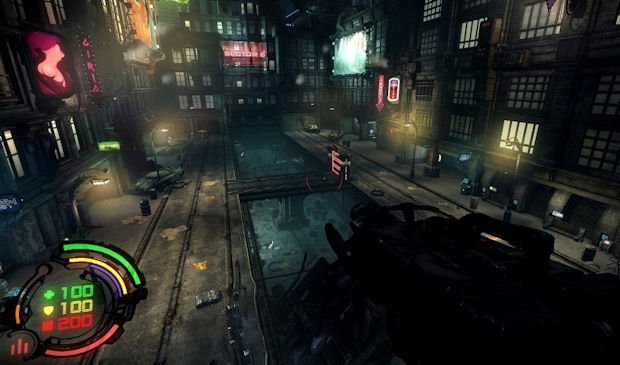 The challenge is a fair one, however. Despite the brutality of the game’s enemies, no fight feels truly unreasonable. So long as players prioritize their targets, keep moving, and make the most of their weapon variety, even the stiffest competition can be put down. That doesn’t mean it’s not hectic, however. The ferocity of the enemies cannot be underestimated, and many of the huge arena-like conflicts will end with players breathing a sigh of relief and taking a moment to recollect their thoughts.

The player gets two weapons for the duration of the game — the bullet-spewing CLN gun and the electricity-based NRG weapon. Despite the apparently limited arsenal, both weapons can be upgraded to house different modes, making each of the two firearms far more versatile. For instance, the CLN can be upgraded to become a shotgun, grenade and rocket launcher, or deposit mines — with players able to make the gun transform between each mode on a whim. Meanwhile, the NRG gun can fire electric mortar shells, spray lightning, or be used as a railgun. Each of these modifications can be further upgraded with new properties, and the player can also boost his own health, ammo capacity and shield strength.

These upgrades are paid for at upgrade stations using NANO earned via kills and found littered throughout the levels. Each stage features multiple secret areas where large NANO caches are available, and some of these positions are quite fiendishly hidden. That said, there’s enough in-game cash within easy reach for players to piece together a worthy selection of upgrades, some of which are damn-near essential for facing the game’s most difficult battles. 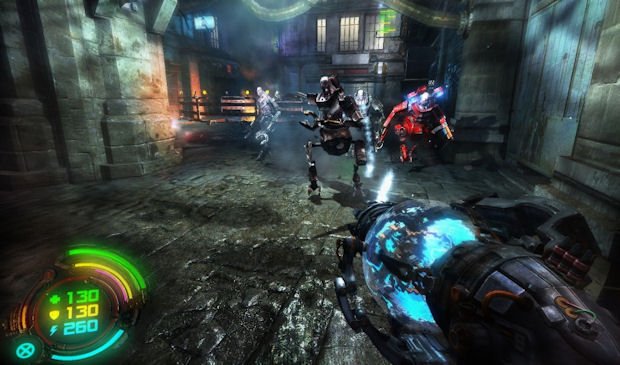 Hard Reset‘s strength comes from its undiluted purity of gameplay. It commits to presenting a certain style of shooter and never deviates from that course, only evolving in terms of how big its combat sequences grow and how much the increasingly devastating robots up their ante. Those with fond memories of older FPS games will feel right at home with what Hard Reset offers and ought to revel in the consistent level of high octane carnage it delivers. There’s an unquestionable satisfaction in each fight, especially when the final bot has exploded and the player stands among various steel limbs and burnt-out hulls, surprised to somehow be alive.

That said, Hard Reset isn’t without its frustrations. The biggest issue stems from the fact that the player character moves a touch too slowly for the fast pace of the game. Sidestepping charges from large enemies or avoiding projectiles become near-impossible tasks considering how swift everything is in comparison. One boss’ attacks are literally unavoidable due to the player being logistically unable to clear the splash damage of its missiles. Fortunately, the game presents just enough health pickups to balance the disadvantage, but it’s still quite annoying to absorb so many inevitable hits while feeling helpless.

Another issue is that Hard Reset is a particularly short affair. It can be cleared in around four hours, with an ending that doesn’t feel like an ending at all. In fact, the game’s conclusion feels more akin to just getting rudely thrown out of the game without any sense of closure. It’s a shame that such a consistently engrossing game is so jarringly cut short. 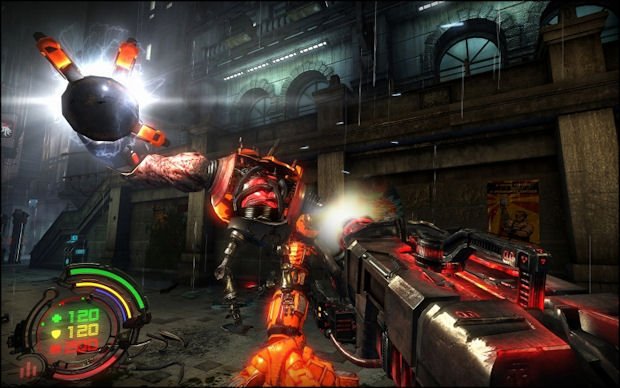 That said, for thirty bucks it’s not much worse than your average retail product, and the sheer fun of the combat ought to encourage a second play. Simply for what it provides, Hard Reset deserves one’s attention and only those who are thoroughly obsessed with game length and their mutated idea of “replay value” should feel completely repulsed by the notion of a short campaign.

Hard Reset looks gorgeous and has an incredibly hard, loud aural presentation. Featuring bold environments with Blade Runner influences and a range of robots that all look cold and threatening, it’s quite an aesthetically impressive effort, especially for the studio’s first outing. I love the bright, colorful lighting effects, and how they contrast against the gritty backdrops. It has a very derivative look, but it’s worn so confidently that it might as well be of the game’s own invention. 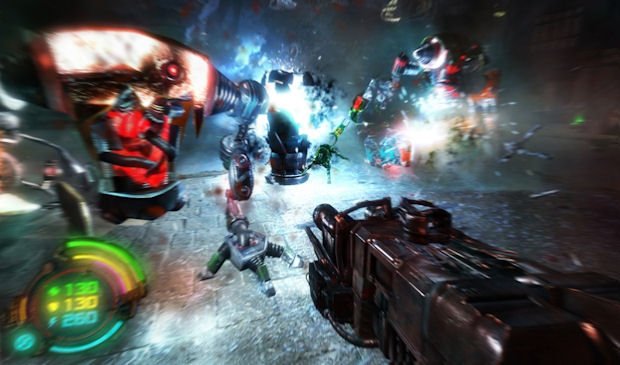 Hard Reset is truly a great experience, especially for fans of titles such as Painkiller and Serious Sam. Its devotion to distilled, pure, videogame violence is something that deserves respect, and the fact it’s performed so sleekly and satisfyingly is a fantastic surprise. With Hard Reset, an excellent sense of level design and game balance has been married to a ruthless difficulty and voraciously furious combat to create something that tests the nerves and addicts the mind.

If you’re sick of all the military shooters vying for your attention but still want an honest, straightforward FPS experience, Hard Reset has the cure for your fever.