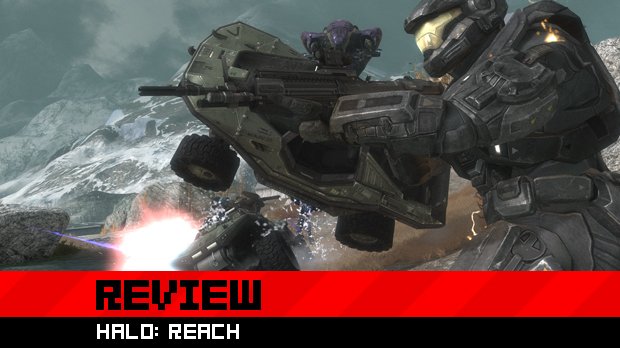 On November 15, 2001, Microsoft officially joined the console wars with the release of the Xbox. The system launched alongside a handful of titles, including arguably the sole game that helped establish Microsoft in the console market and popularize an entire genre, Halo: Combat Evolved.

Halo has gone on to become one of the biggest franchises in gaming. The series has sold 34 million copies as of May 2010 and has generated $1.5 billion in sales. That’s not even accounting for the books, films, toys and everything else related to the brand.

Now, nearly a decade later, Bungie is moving on to a new multi-platform project with Activision, but not before one last hurrah. While this won’t be the last Halo title, this will be the last one developed by Bungie. They’re going out with a bang, as Halo: Reach is everything a Halo fan could want and more.

Halo: Reach begins with the player assuming the role of a SPARTAN-III, simply known as Noble Six since he’s been reassigned to Noble Team. The team’s previous sixth member sacrificed his life against the Covenant, so you can imagine that Noble Team, consisting of four other SPARTAN-IIIs and a SPARTAN-II, aren’t too thrilled with the new guy. Personal feelings are quickly put to rest, though, as Noble Team discovers the presence of Covenant forces on the planet Reach.

It’s immediately apparent at the start of Reach how much of a greater focus Bungie has put into the characters. There’s more dialogue, cutscenes and story presented than in previous titles, and Reach easily has the most character development ever seen in a Halo title — to the point that I grew attachments to the characters and genuinely felt sad at a number of events that happened over the course of the campaign. The very last mission will choke you up a bit.

Another remarkable change to Reach is the feeling that you’re never alone. Sure, you had the super AI Cortana making smart-ass remarks with Master Chief, but it was typically a one-soldier-against-all-odds scenario. Reach sees you playing alongside at least one other Spartan throughout the story, as well as with UNSC soldiers. While the AI seemed about the same as in past games for regular soldiers, the AI for other Spartans was extremely impressive. A few times, I sat back and let my fellow Spartans clear areas without my assistance.

I was especially impressed with how Reach offers more than just Covenant and human soldiers. Some levels feature wild animals and regular humans. A later part of the game sees you helping with the evacuation of a city, and everyday citizens are running for their lives as Covenant are shooting at anything that moves.

On that note, the enemy AI has been greatly improved. I started playing Halo: Reach on the game’s hardest difficulty, Legendary, thinking it would be the same as in previous Halo titles. I couldn’t even get past the first level and had go down to Heroic difficulty. The AI is fierce, vicious and no longer a pushover. And no, playing four-player co-op won’t help you out in Legendary, either; the game will scale difficulty based on how many people are playing. That is, it gets even harder with additional players. Legendary is so intense that you can now earn two Achievements for beating the game on the hardest difficulty — one by yourself and one with friends.

Every Covenant alien type featured in past Halo games is included in Reach, with the addition of the Skirmisher, a cousin to the Jackals. The Skirmishers are remarkably fast and can easily jump as high as a three-story building. But they’re a lot easier to take out compared to the Jackals. Other notable changes with the enemy classes is that Drones are less plentiful (and explode when shot); the methane tanks strapped to Grunts’ backs can be shot, which causes an explosion; and Brutes are far weaker compared to the ones in Halo 3: ODST. The biggest change with the enemy units are with the Elites. They  have more of a wild side to them now and are far more plentiful on the battlefield than they were in the first two Halo games.

While there are plenty of new weapons, a lot of the older weapons, especially Brute-flavored ones, are missing in Reach. At this time in the conflict, Brutes were low on the Covenant hierarchy and weren’t offered the same level of armor or weaponry as seen in Halo 3: ODST.  There’s no dual-wielding in the game either, but it’s not really missed — all the weapons are balanced to be strong enough on their own.

The biggest change for players in Reach are the Armor Abilities. These new abilities will give players extra advantages such as: sprint, invulnerability, camouflage, jet pack, creating a hologram, rolling, and a defensive bubble shield. In the campaign, players typically start with the sprint ability and can switch to different abilities at various points in the game by picking them up like a regular weapon. In multiplayer and Firefight, you’ll usually be offered a load-out of different Armor Abilities and weaponry to choose from before a match and after each respawn.

Campaign-wise, I didn’t find myself too concerned with swapping Armor Abilities. On the multiplayer side, though, I was constantly switching things up after each respawn. The Armor Abilities feel so natural, so part of the Halo experience now, that it just seems weird playing a match without Armor Abilities on.

There are 13 multiplayer maps (five of which are set in Forge World) and eight Firefight maps, all of which are taken from the campaign. On the versus side, you’ll have some familiar playlists to chose from (Assault, CTF, Infection, Juggernaut, King of the Hill, Oddball, Race, Slayer and Territories) along with a few new ones (Head Hunter, Invasion, and Stock Pile) that are all pretty fun.

One of my favorite things about Reach is all the customization offered by Firefight. You can’t change the environment with Forge in Firefight, but you can tweak every single setting. The first thing I did in Firefight was change the settings so that I moved super-fast, turned down the gravity all the way, and used just a Gravity Hammer against nothing but Grunts. Your custom games can be shared with others and now that there’s matchmaking, Firefight is going to get so much more playtime than it did in ODST.

Nothing in Reach will be more of a time-sink than Forge World. Bungie has given players the biggest map they’ve ever created, a ton of items and a $10,000 budget to create whatever the hell they want to. You can even recreate entire maps from previous Halo games. Check back later for a quick video tour of the new Forge World.

We know that the planet Reach will fall at the hands of the Covenant. Yet, the journey from start to finish is such a great ride that you hope in the back of your mind that things will play out differently because you’re in control. Of course, that doesn’t happen, but the events of Reach lead directly into Halo: Combat Evolved and as we know, humanity eventually does defeat the Covenant.

Halo: Reach is everything a Halo fan has ever dreamed for. All that was lacking from previous Halo games is here and then some. This is Bungie’s love letter to their fans and they’ve definitely gone out with a bang.