It’s nice to have the Chief back

So I’ve talked about my extensive history with Halo already in our Halo Infinite multiplayer review. This is the first major Halo game in six years, let’s get right into it! 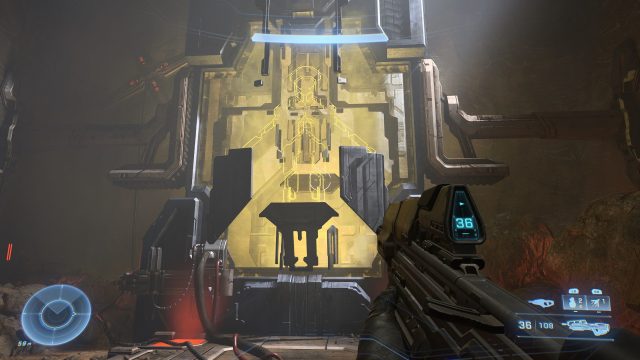 After Halo 5, Master Chief is rescued and resuscitated from the depths of space, and has a job to do. Halo is notorious for cliffhangers, but the payoff for this one, and how Chief recovers from unrelenting odds and forges ahead sets the stage for Infinite‘s forward momentum. This is a Halo fan’s Halo game. Forget that it has the perceived trappings of a modern open-world setup, as it doesn’t detract from the core message in the slightest: which is, of course, to wreck stuff, and blow it up, if possible.

Far from a reboot, Halo Infinite continues the story of past games, but it does feel like a soft reset. Cortana, Zeta Halo (the game’s world/setting), the Banished: all of these things are thrown around, and explained as you play. Chief comes back online and meets a lonely pilot, and immediately learns that he needs to take on more aliens to avoid some bad outcome. It’s how things go! It’s what he does.

Sometimes it’s rather cartoony in nature how much you’ll need to blow things up, which is a compliment. This is an arena action shooter at heart, and you’re destroying everything to a fantastic soundtrack as a one-man army. This is all-Chief-all-the-time, which is going to delight a lot of people who were tired of side stories of other Spartans. We’re back to basics.

I should say up front that the open world does not suck. After a few intro missions elsewhere, Chief and his pilot are thrown into Zeta Halo, which has a world map. From there, you can wander around, collect stuff, kill stuff, go conquer forward operating bases (FOBs) which highlight more stuff and create fast travel points, or run to critical path missions (which have a cutscene transition and often take place in a bunker or structure).

Okay, so there’s a lot to unpack here. My first inkling was to think of FOBs like radio towers, but they’re almost nothing alike. So in your typical Ubisoft game (or pretty much any pin-filled open-world-busywork game now), you head to radio towers like it’s a part-time job, then piss off and never visit them again, as their purpose is to just be scaled and forgotten. But FOBs actually are bases, offering up chances to spawn vehicles, weapons of choice, and take troops along for the ride: the power of which is measured by your valor rating, which is like a side XP hustle.

During all the FOB capturing and usage of all of the above, I never once felt like they were rote tasks to be completed. They felt like an organic part of the game, completely lacking in the cynicism of modern open-world game design. Halo Infinite succeeds because it doesn’t lose sight of its roots and never really tries to be something different. With that aim, it’s actually a breath of fresh air.

Campaign missions are also very traditional, and some of the transitions between open-world play and said missions are noticeably flashy. Yes, a lot of them are in the literal bunkers I mentioned earlier, cordoned off from the map, but the ones that aren’t feel that much more imposing when you can look in the background and see the giant mountains of Zeta Halo. Again, the open world works in Halo Infinite‘s favor pretty much at all times.

In terms of fundamentals, we already talked about some gameplay mechanics in the multiplayer review, but suffice to say they’re translated wonderfully to the campaign. Here, you have access to power-ups whenever you want on a strict cooldown, as they’re unlocked. Smartly, Master Chief can use an unlimited grappling hook right at the start (again, on a cooldown, which can be upgraded), eventually gaining access to a quick dodge (that can add charges), a projectile radar, and a deployable shield.

While the control system to swap between them is cumbersome at first (and requires several d-pad presses), you eventually get used to it, and the potential for style videos is all the better for it. Swapping between a grappling hook, clambering up a ledge, punching a grunt in the face, then quick-dodging a barrage of energy grenades is satisfying. The potential here for Master Chief to be badass is at an all-time high, and the amount of weapons in the game doesn’t feel too overwhelming — notably because a few of them are reworked clones of each other with more power and a different paint scheme.

That’s in part because 343 isn’t above re-using some things in the campaign, a tactic that’s subtle at first, but becomes more obvious as you progress. One unfortunate byproduct of this is a completely re-used boss fight, among several minibosses that do not feel unique in the slightest: a Borderlands-esque “it’s this unit, but it looks a little different” move. This also extends to some of the aforementioned bunker zones in core missions, which are sometimes a little too similar with their layouts. 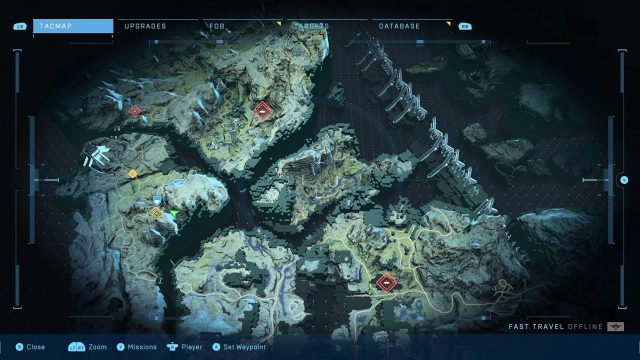 When these moments happened, I let out an audible groan. But during the course of the campaign and all of my open-world mucking about, it wasn’t a constant. There’s plenty of variety there, just be warned that not all of the campaign is gold. Of course, the elephant in the room is worth mentioning: no co-op at launch is a crying shame.

It feels outright wrong to not play a Halo game with split-screen co-op on day one, and I have to lament the lack of it, as this would be a really kickass co-op campaign. The way FOBs work with the loadout system and vehicle drops would provide an endless amount of fun with friends: roaming around at your leisure and killing stuff on higher difficulty settings. The moment 343 launches the co-op update, I’m getting friends together.

In the meantime, exploring the open world is fun even solo. The unlocks are innocuous enough, in the sense that you can complete the game on normal without having to worry about “XP” or even basic upgrades, so long as you can handle a battle rifle, figuratively speaking. There’s cosmetics that feed into multiplayer unlocks, said ability upgrade cores, and a few things to find. There’s also sidequests, several of which are like miniature dungeons where you blow more stuff up. There’s barely any downtime in Halo Infinite, even if you’re doing random things.

While we covered multiplayer extensively already, it’s important to at least mention it again before we close up shop on the launch version of Halo Infinite. So in theory, it’s glorious. All of the same arena shooter foundation translates well, and the moment-to-moment gameplay is great. I just hope they continue to iterate on the reward system, because it really has the potential to be the best multiplayer on the market with a few tweaks. Bit by bit, we’re getting there. Slowly.

If I had one piece of advice for people on the fence with Halo Infinite, it would be to not worry about the open world and embrace how it’s handled here. I was incredibly worried at first that 343 wouldn’t be able to resist the siren’s song of other major publishers, but the restraint here is appreciated. This is an extremely 2021 Halo, and I think it’s going to win over both lapsed players and diehards.

[This review is based on a retail build of the game provided by the publisher. This covers the campaign and multiplayer portion of the game, accompanied by a score that encompasses both aspects.]