It was ten years ago that Halo: Combat Evolved was released on the original Xbox. The series would go on to create a standard for the first-person shooter genre and arguably help secure the Xbox as a household name. First-person shooters have evolved considerably since the original release of Halo, but even so, I still consider Combat Evolved to be one of my top games of all times due to what it did for me as a gamer.

For me, Halo opened my eyes to what a truly immersive experience could be. Never before in a videogame had I experienced such a rich, huge world with intriguing characters and an incredibly engaging story. And of course, there was the multiplayer LAN component, which for someone like me in 2001 who could never afford a PC rig, allowed me to get a taste of what intense 16-player combat could really be like.

With the tenth anniversary on hand, Halo: Combat Evolved Anniversary is 343 Industries’ way of both giving something back to fans of the original and introducing new players to the start of Master Chief’s journey.

At its core, Anniversary is the exact same Halo: CE experience you remember. 343 didn’t change anything in terms of gameplay, mechanics, or AI. The only major change is in terms of visuals, which makes Halo look like it belongs in the current high-def generation of games. The visual fidelity of Master Chief’s character model has been increased by 300 percent, while campaign environments have increased by between 3,000 to 8,000 percent.

The visuals are really mesmerizing, especially when compared to the original game’s, which is something you can do yourself at any time during gameplay by pressing the Back button on your controller. The transition between those graphics and the revamped look takes about four seconds to complete, during which time the action continues but the screen is completely black (the delay happens regardless of the game being installed on your hard drive). You can even see cinematics with the old visuals — you just have to be in classic mode before the cutscene begins. 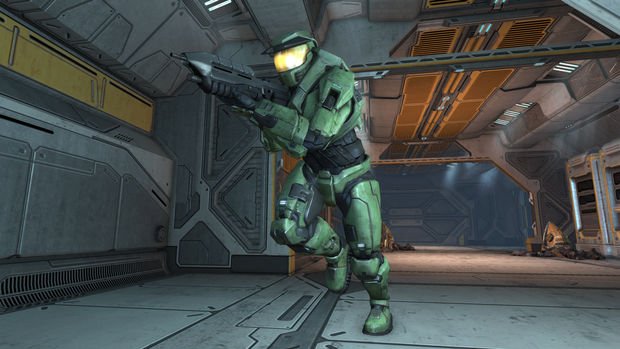 While I get that 343 was trying to keep the same feel, it is a shame that they didn’t try to fix a few minor annoyances. Specifically, the freeze you still get whenever parts of the level are loading. It only halts gameplay for about a couple of seconds in single-player, though it feels a little longer when you’re doing online co-op.

The story still holds up and it was pretty rad getting to re-experience everything with the updated visuals, despite some bad facial animation syncing with the voice work. There are parts that dip, specifically points where you’re just walking with no combat or music going on for a good while. It’s funny, I never noticed that before but it’s noticeable now with how current-day games handle the structure and flow of levels.

Other changes you can expect come in terms of the remastered sound effects. It’s silly, but things like the Covenant laser weapons have more of a pew-pew-pew effect, giving an increased feeling of realism. The musical score has been remastered by Skywalker Sound as well, with additions to a number of songs, some more noticeable than others. You do have the option of listening to the original score by Marty O’Donnell by selecting it from the menu screen. Either way, the score is as wonderful as ever. 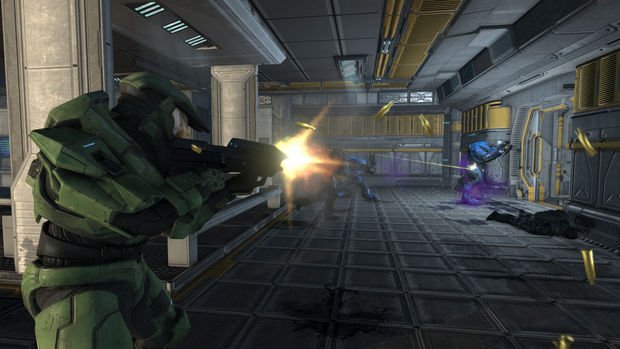 For hardcore Halo fanatics, every level now contains a hidden skull (game modifier) and more importantly, Terminals. This time, Terminals are fully animated sequences aimed to give some back story from the perspective of 343 Guilty Spark. While they’re all enjoyable to watch, I feel you really need to know some of the backstory in the Halo universe presented in the novels, otherwise a lot of keywords will go over your head in regards to Forerunner lore. There is one particularly memorable, heart-wrenching Terminal that animates a scene from the Halo: Fall of Reach novel involving Captain Keyes.

Additionally, there’s Kinect support, which — out of everything in the package — is the least-desirable component. The Kinect controls are tied to voice commands, so you can say things like “grenade” to throw a grenade or “flashlight” to turn on your flashlight. Saying the keyword takes about two seconds for the action to register in-game, so it’s not much help when you’re surrounded by Elites compared to simply pressing the grenade button.

I did at least like that I could say things to turn on subtitles, 3D, or switch between classic and remastered visuals. I’ll take voice controls over navigating a menu function any day. Plus, there’s the Analyze feature, which gets you intel on weapons, vehicles and characters by scanning the object. There’s only 45 things to scan, and since this isn’t tied to any Achievements, it’s more of a distraction for OCD folks. Plus, the information you glean from what you scan is all stuff you can easily find on a Halo Wiki. 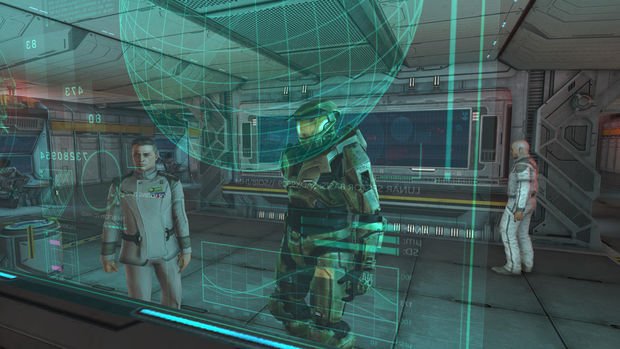 Finally, there’s the stereoscopic 3D functionality — it’s fantastic. I checked out the 3D on my 47″ Toshiba LED 3D TV and it looked great. Even the HUD elements, which are usually my number-one complaint with 3D games, were fine as they didn’t really get in the way. I think what makes the 3D work well here is that it’s very minimal how much stuff is in your face. It’s a subtle effect that didn’t hurt my head.

All of this makes up the single-player content. The other half of Halo: Anniversary consists of the multiplayer based on the Halo: Reach engine. First, there’s Firefight with a map called Installation 04. The main thing with this is that the map feels like it’s taken from the campaign’s “Halo” level. Additionally, there are AI-controlled soldiers for the first time to assist you and three other players facing wave after wave of enemy forces. Granted, the AI units aren’t the sharpest and serve to distract more than actually help.

As for competitive multiplayer, there are six remade maps in this collection that consist of maps from Halo: CE, Halo: CE PC, and Halo 2. Those maps are Battle Canyon (Beaver Creak), High Noon (Hang ‘Em High), Penance (Damnation), Solitary (Prisoner), Ridgeline (Timberland) and Breakneck (Headlong). All the maps felt great, and it was awesome to revisit them re-imagined in Reach. My favorite was the Hang ‘Em High remake; it’s substantially better than the remake we saw in Halo 2. 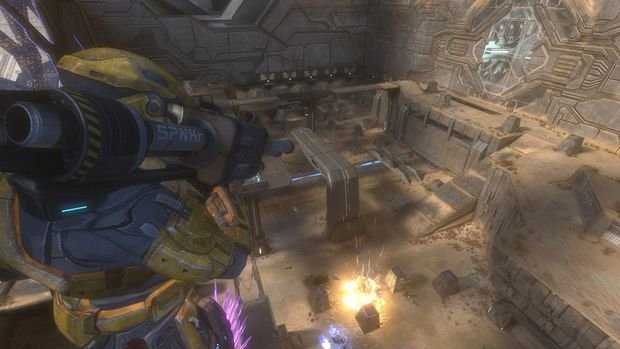 All the maps have some additions to them — Beaver Creak, for instance, sees the teleporters located in new positions. There are two different variations to every map: one more akin to the original version, and then the slightly updated version.

Halo: Anniversary matchmaking will also see new matchmaking playlists that replicate the original Halo feel for Squad, BTB, FFA, Classic, and Firefight. This means that there will be no Armor Abilities, one Frag Grenade at loadout, melee strength is reduced, and player speed, gravity, jump height, shield, and health recharge rates are all increased.

The icing on the cake here is that players will also be given a pistol with traits that mimic the Halo: CE pistol in their loadout. So that means you can hold down the trigger to unload your clip and the power is greatly increased (three headshots and you’re dead!) 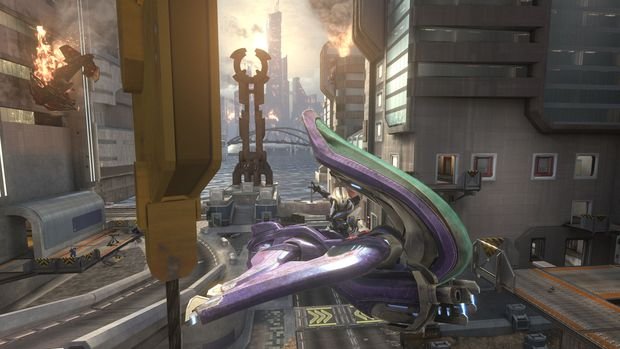 All this multiplayer content will actually be sold separately in the “Anniversary Map Pack” for 1200 Microsoft Points, scheduled to come out the same day Anniversary is released. Additionally, Anniversary will include a code for this map pack, so you have the option of downloading the content to store on your hard drive (making it easier to launch these maps through Halo: Reach) or just launching them through your Anniversary disc.

At the end of the day, I think Halo: Anniversary is primarily designed for hardcore Halo fans. If you don’t already own Halo: Combat Evolved or are still addicted to Halo: Reach, then I highly recommend getting Anniversary. The original Halo is available on Games on Demand for 1200 MS Points, and with the aforementioned map pack alone being sold for the same price, you’re getting a lot of bang for your buck.