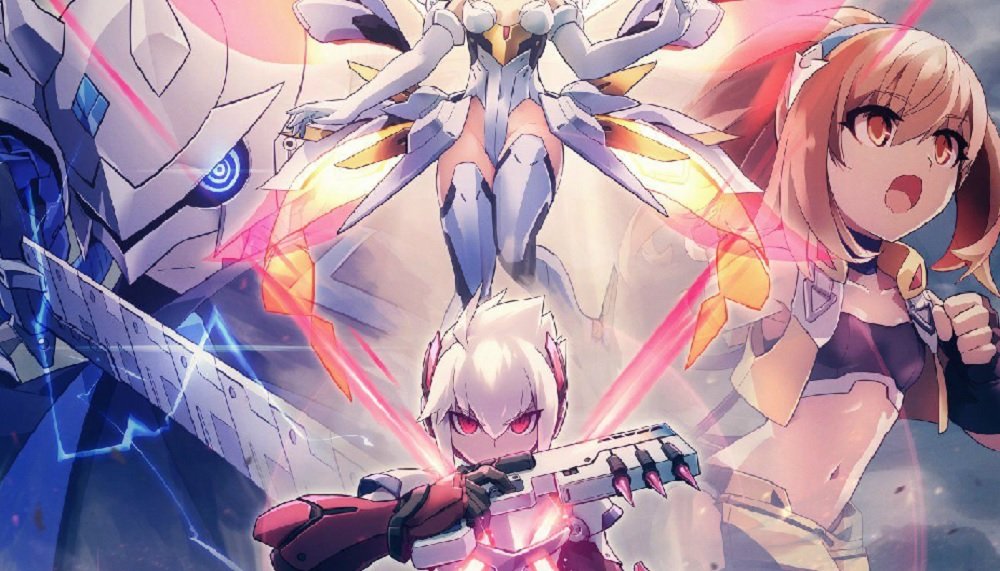 Yes, this series is spinoff worthy

In case you forgot, Inti Creates made their name crafting Mega Man Zero: one of the most celebrated subseries in the history of Mega Man. Platformers are in the studio’s DNA, so when Inti announced the spiritual successor to the ZX series (their Zero follow-up), I was ready.

Since 2014 the Gunvolt franchise has really come into its own, hosting two main entries (1, 2) and two retro-themed spinoffs (Mighty Gunvolt, Burst). Although it requires a bit of dedication to the story so far, the third spinoff, Gunvolt Chronicles: Luminous Avenger iX, keeps the five year legacy going strong. 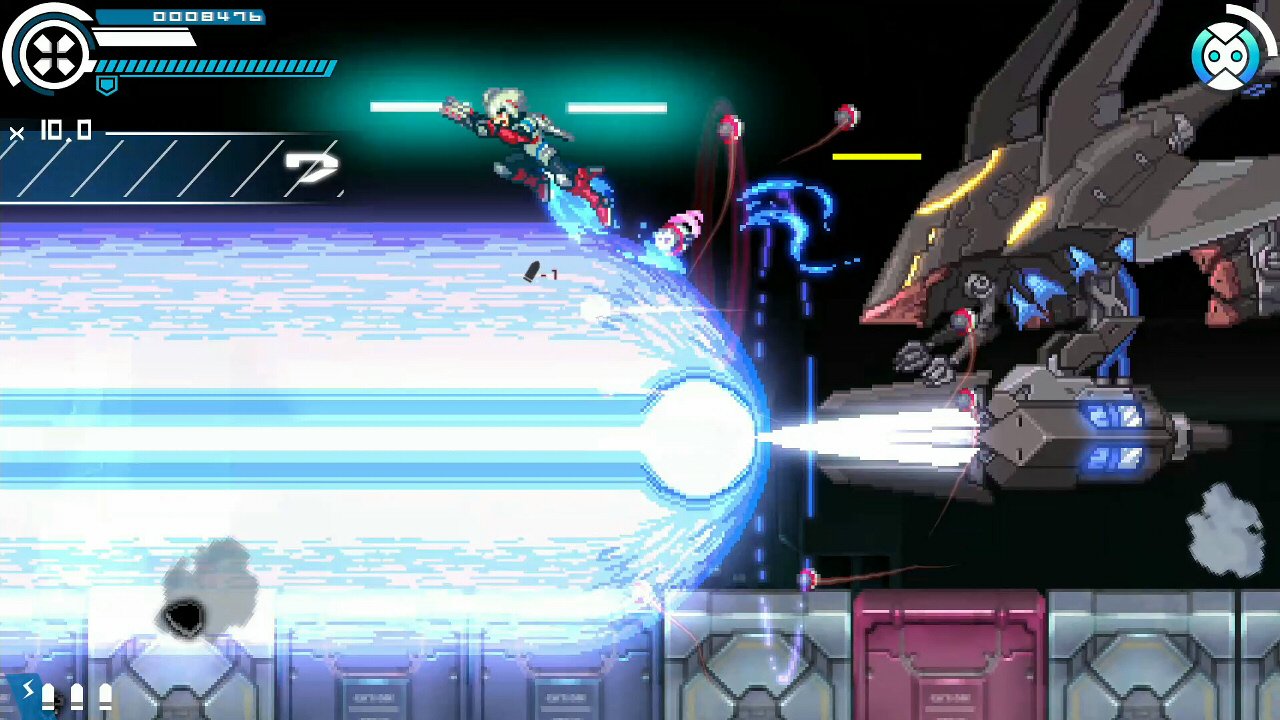 Before I go any further, just know that even with prior knowledge of this whole futuristic cyborg and AI-ran landscape, the story is a little all over the place. Oh here’s a strong silent type that speaks in riddles, oh here’s a new mysterious and cryptic object that’s partly explained, oh here’s a secret underground base, join our resistance please! It only sort of comes together in the end, but this is an action platformer we’re talking about, so some of those sins of omission can be forgiven.

Sporting a name Square Enix would be proud of, Luminous Avenger iX deals with Copen, the deuteragonist of Azure Striker Gunvolt 2: hence, spinoff. Copen’s personality is less affable than Gunvolt, making him harder to connect with, but mechanically, he holds up. Although Copen can fire a standard repeater pistol round, his real “oomph” comes from dashing into enemies to bring up a lock-on reticle, which significantly powers up your shots and allows for homing fire from your special weapon (think Mega Man abilities that you can swap between).

The result is a highly mobile playstyle that encourages you to zip around, dashing from foe to foe and taking them out in mid-air. It’s exciting but strategic, thanks to the “bullit” system, which doubles as a mana meter. Basically, everything extra in Luminous Avenger takes a bullit (or more) to use, which includes the “prevasion” mechanic: a shield that saves you from taking a hit so long as you have the bullits to pay for it.

As time goes on you start to take more risks, spending bullits for offensive maneuvers rather than defensive, tactically reloading them when you have a brief moment of sanctuary. If need be you can also rely on a sparing, randomly induced resurrection mechanic, which helps alleviate some frustrating deaths. While Luminious Avenger is a challenging game for the most part, Inti Creates has stuffed in concessions to facilitate all skill levels.

To really succeed you’ll need to master the bullit dance, and thankfully you can customize pretty much everything, configuring every button, or turning off prevasion/resurrection. If that’s not enough, players can also buy and toggle an easier or more hardcore mode at the shop. It’s flexible! I love Inti Creates’ whole philosophy surrounding the Gunvolt series with the sliding difficulty setting.

Speaking of difficulty, multi-phase bosses return, as do their desperation attacks that spring supers right before they die. I had multiple “photo finishes” where a boss and I killed each other at the same time, which speaks to the efficacy of their design. Weapons feel punchy and impactful, and sport the same “weakness” concept from the Mega Man series proper. Plus, when a boss hits a desperation ultimate that brings up poetry on the screen like “strut down the runway to deliver your ticket to hell,” you know it’s about to go down. 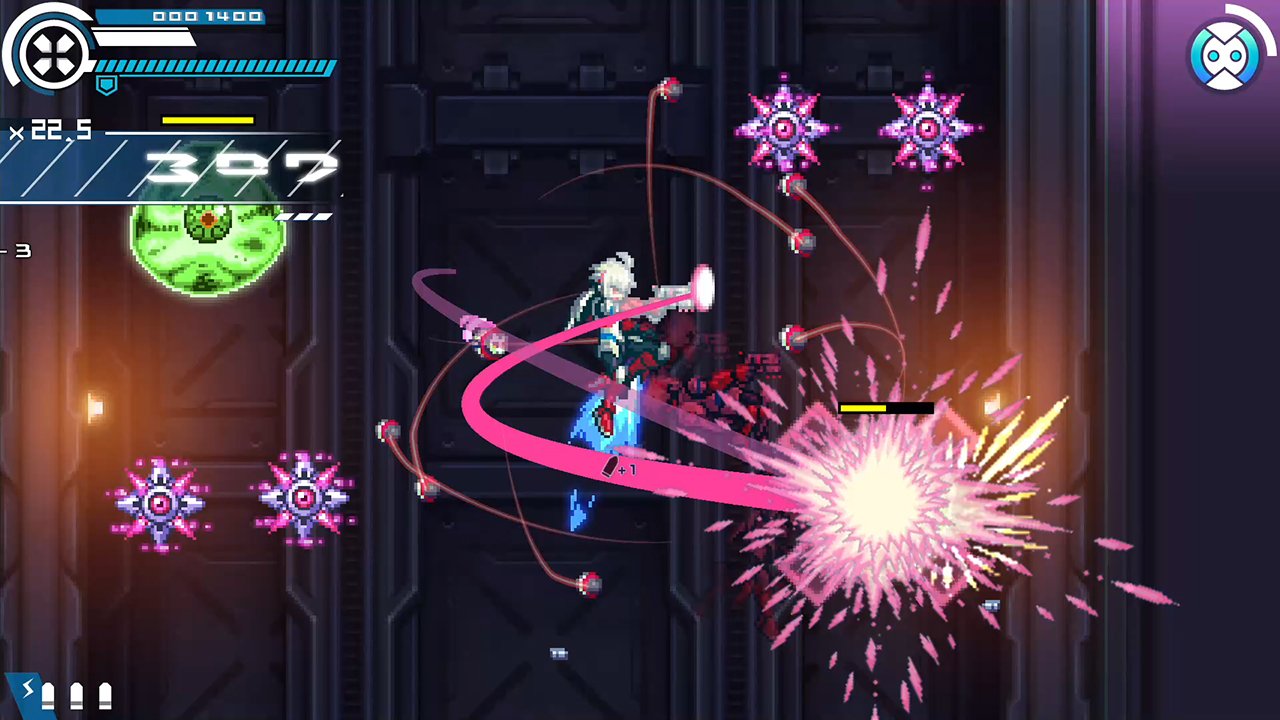 That verse pretty much sums up Luminous Avenger‘s theme as a whole: silly macabre. The resistance force is mostly made up of cheery ShÅjos (which looks especially absurd when stone-eyed Copen is on the scene), but there’s a lot of darkness and death wound up tight in the narrative.

It’s interesting witnessing the twists and turns despite the varying degrees of success, and to see Inti Creates experiment with a more serious take on what are mostly throwaway platformer stories. A short story for sure, as Luminous Avenger will last you a few hours, tops. When you’re done there’s extra missions to tackle as well as high scores to strive for in a separate score attack mode, but don’t expect any major surprises.

By virtue of the second main iteration trumpeting both styles of play (Gunvolt, Copen), I prefer it, but Luminous Avenger distills so much of what made the series pop in the first place that it’s also worth investing in. My advice? Try Gunvolt 2 first to see if you like Copen, then go from there.