Before BlazBlue, there was Guilty Gear. As one of my favorite fighting games of all time, the series has undergone a whole lot of updates, many of which were fairly unnecessary for all but the most hardcore of fans.

The newest iteration titled Accent Core Plus R is based on an arcade build that released in September 2012 in Japan. It’s basically a massive rework of the game that makes two classic characters legal again (Kliff and Justice), retools all 25 characters, and adds new challenges.

Let’s see how these changes pan out on the PlayStation Vita. 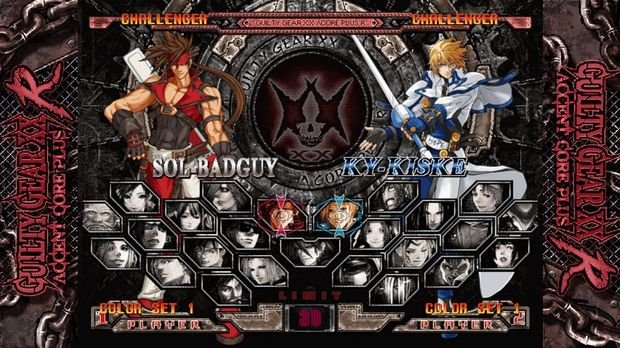 At a technical level, the core tenets of the Guilty Gear series are all upheld in Accent Core Plus R. The easy to learn, yet difficult to master four-button system, the aggression-centric super (overdrive) meter, Faultless Defense (the ability to block damage/chip-damage through meter use), Roman Canceling, Force Breaks (EX moves introduced in Accent Core), and of course, (balanced) insta-kill supers are all back and better than ever.

One of my favorite things about the Guilty Gear franchise is how easy it is to create and learn your own combos given the tools available. By using Roman Cancels to essentially cancel any move in the game into another combo, you can utilizing the Gatling Combo system (which allows for a basic string from light to heavy attacks) and easy-input launchers to pick things up almost immediately and look cool while doing it.

Of course, given how fast some of the characters in the game are and how nuanced baiting is, nearly everything can be countered in the blink of an eye. It’s the reason why Arc System Works has changed so little of the core foundation of the game since Guilty Gear X — it just works, barring the fact that characters need to be tweaked here and there.

Speaking of tweaks, as a result of the Plus R update, all 25 characters have been modified, so even some veterans will have to re-learn a combo or two. The previously illegal Justice and Kliff have been re-worked (read: significantly nerfed) so that they can be used in tournament play. Justice specifically has had a significant dropoff in nearly all her stats, and she’s significantly slower than her normal incarnations.

She’s basically a trap-based character now until she triggers her Omega Shift super, which briefly transforms her into her old mobile self. From what I can tell after testing every character, the game is fairly balanced in its Plus R state — perhaps more so than ever before — until the US region starts cracking into the meta-game, that is. 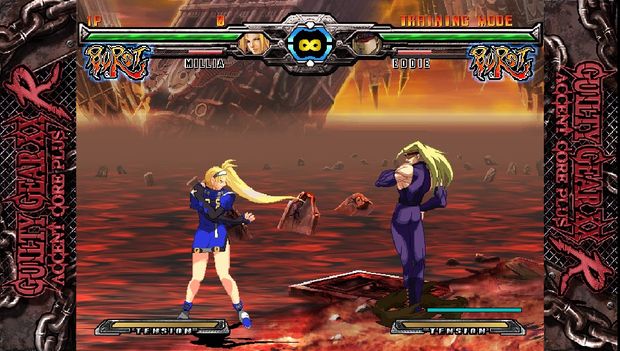 As you can probably tell, Guilty Gear can be a bit difficult to pick up compared to the vast majority of other fighters out there, so I recommend checking out a basic guide in tandem with your training efforts.

The giant cast of characters, all of which have completely different personalities and styles, hold up incredibly well even today. From the regal Ky Kiske to the male nun Bridget, there’s someone for every fighting game fan to enjoy. Characters aside, if you’ve never experienced a Guilty Gear game before, one of the main draws is the rocking soundtrack — it’s simply one of the best in gaming.

Every character has their own track that is custom built for them, and you’ll start to identify certain tracks with certain personalities. The artwork is also stunning, and looks great on the Vita’s OLED screen, even if it’s not technically an upgrade from the console versions in any way given the 4:3 resolution — which thankfully isn’t a downgrade, like the PSP version. A lot of work went into making the Guilty Gear series timeless after all that time, and Arc System Works certainly succeeded.

Every previous mode has been preserved, including a story mode, arcade play, M.O.M mode (Medal of Millionaire, a survival mode of sorts), Mission Mode, galleries, and more. For solo fighting game fans, there’s a lot of content on offer here — almost too much, provided you don’t want anything as high-reaching as Tekken‘s spin-off minigames. 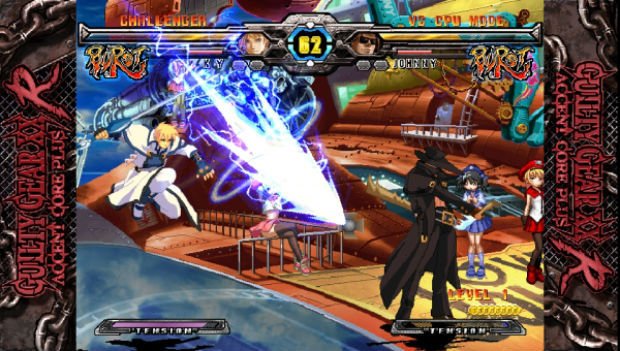 That all sounds good right? Well here’s a pretty huge, disappointing bombshell — there is no online support, and there’s no support for cross-play, cross-save, or cross-buy with the PS3 version of the game (which has, at the time of this writing, not obtained the Plus R update yet). That’s right, despite the fact that it was advertised in a previous trailer, there’s no online mode for the Vita version of Guilty Gear, as acknowledged by Arc System Works.

To say this a massive disappointment and will no doubt effect a decision to double-dip is an understatement. If you already own the game on the PS3 or the 360, it’s probably best to just wait for the free update to make the game into Plus R. There is local ad hoc support, but to many Vita owners, this is basically useless.

If it wasn’t for the major omission of new features, the lack of online play, and the fact that Plus R is coming to consoles for free, I would have enjoyed Guilty Gear on the Vita a whole lot more. The fact of the matter is, the game still holds up even today, and the series is still relevant, tight, and competitive.

So long as you aren’t bothered by an utter fumbling of features in this port, you’re still getting a solid fighting game that should at the very least, function as a portable training simulation for the console version. I’m pretty torn on the review given the omission of such a major function, but ultimately Guilty Gear is a great game, and that core was preserved here.