When Guacamelee first dropped in 2013 we weren’t exactly hurting for metroidvanias, but we weren’t in the completely resplendent period we are now either.

Here’s the thing about Guacamelee 2 — it’s one of those lateral sequels, the kind where it’s mostly the same, just in a different setting. As someone who didn’t get enough the first time around that’s more than okay. 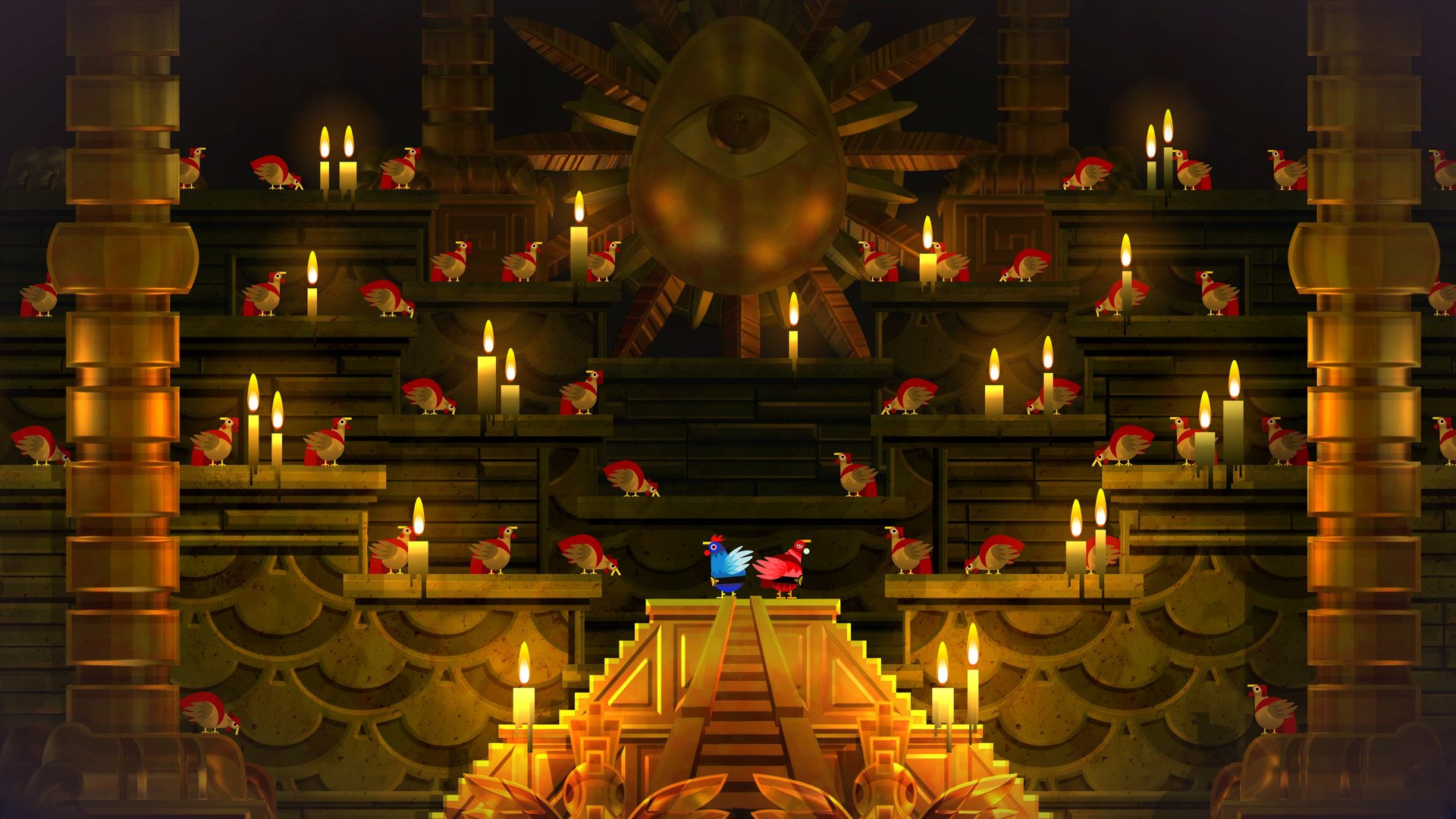 It’s no surprise that Guacamelee 2 kicks off just like Symphony of the Night (reliving a climactic boss battle) given how influential it’s been. It is surprising when it manages to hit some emotional notes that the genre rarely strikes while making me laugh moments later.

Seven years have passed since the events of the original and our hero Juan has since settled down with his own nuclear family. Your first quest is to fetch some avocados for dinner and BAM, here comes the big bad ruining your dimension and the entire “Mexiverse.” As Guac 2 shifts from its heartwarming intro and goes all MCU on your ass it mostly stays in the realm of lightheartedness, only occasionally tempting you to tears.

You may have already noticed the heavy emphasis on Marvel/comic book stylings, and once again the sequel revels in them. Some are dated (there’s a cute Limbo joke stuck in there) and some are a riot. Watching an NPC put sunglasses on because the main villain is about to do something badass had me chuckling for a while. It’s hard to hate anyone in this universe no matter how despicable they seem.

But despite all of that joke juggling its combat is still what elevates it from the rest of the metroidvania pack. Throwing is still incredibly responsive, invincibility frames are clearly visible so casual players will never have to guess as to when they’re dodging, and pulling off an aerial rave into a (simple) command grab isn’t something you’d normally see in a game like this. Slight modifications like paying gold to upgrade stats and powers is surface-level stuff, but an appreciated means to spend bonus currency without having to go to a shop.

The first hour or so will seem really familiar if you’ve played the first, especially as you’re earning back some of your original powers. Slowly but surely Guacamelee 2 gets back to its unconventional ways, like doling out powers after a meta-commentary on video game abilities or leading you to all sorts of optional secrets and challenge rooms. Much to my delight, the chicken mechanics have been greatly expanded in the sequel, something I never expected to talk about in a review of anything.

Developer DrinkBox goes out of its way to differentiate both styles (chickens can glide while your human form can double-jump, and so on) but still allows one to reasonably play most of the game in chicken form. I’m not just saying this: there’s a whole sequence where you’re escaping jail by way of getting flushed down elaborate toilet piping systems as a chicken. Oh, and it leads to a secret Illuminati chicken society with a chicken pope. This game is great. The multiverse angle allows them to explore even more absurdities and embrace it. There’s a “Dank Dimension” where the creators poke fun at themselves, which seems cringey on the surface but is just one of many little extras packed in. 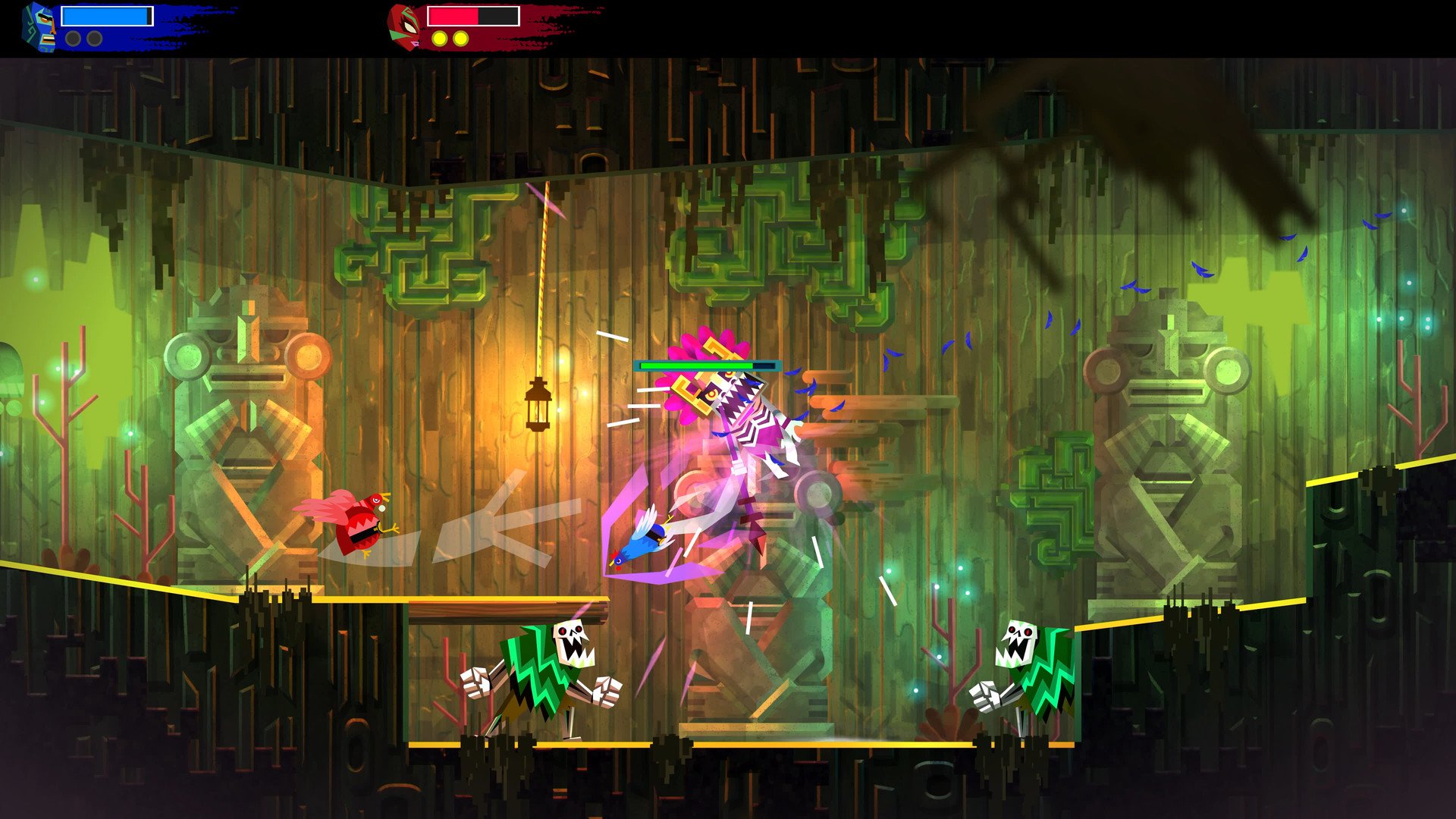 My initial playthrough lined up roughly alongside my experience with the first. I took me six and a half hours to clear the critical path, and double that to find everything. Then there’s a hard mode to tackle and four-player multiplayer is unlocked 20 minutes or so in. It’s still difficult to juggle multiple people when there’s so many tricky platforming sections, but the New Super Mario Bros. “bubble” style of play where folks can get back in seconds later helps alleviate the frustration of those bits.

Not once during my playthrough of Guacamelee 2 did I feel bored or look at the clock, and once I was done, I felt compelled to hunt down everything I’d missed. It’s yet another triumph for DrinkBox and they probably have at least one or two more of these in them.