Grow Home is another entry in Ubisoft’s recent string of passion projects, in the same vein as Child of Light and Valiant Hearts. It started out as a tool for a small group of Ubisoft developers to experiment with procedural animation, and sprouted into an idea for a full-fledged game as the team began to notice how much fun they were having just messing around. It’s a charming origin story for a very delightful videogame.

The cute and simple visuals reeled me in, planting a seed of interest in my mind which grew into satisfied enjoyment when I finally began to play it. Everything in Grow Home hits that perfectly charming tone, from the adorable character to the quirky gameplay mechanics. What’s more, all of this can be enjoyed without having to worry about Ubisoft’s unpopular Uplay service. 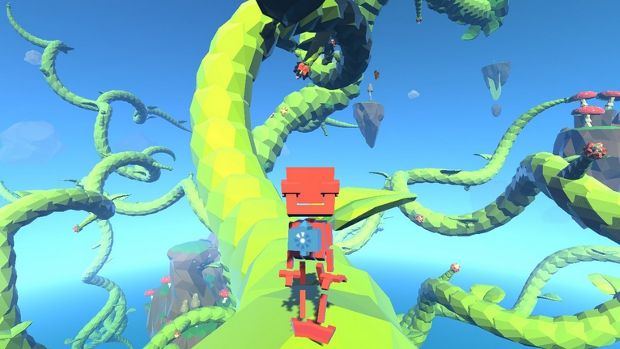 Grow Home is the story of a happy little robot named BUD (a Botanical Utility Droid), who is sent to an alien planet to search for flora to bring back to his home world. Your mission is to collect seeds from a beanstalk-like plant called the Star Plant. In order to harvest the seeds, you must help the plant grow tall and strong by guiding its vines to the surrounding nutrient-rich islands.

Your main objective will be growing vines. Basically, you grab onto the end of a vine, press a button, and hold on for dear life as it shoots off, twisting and turning through the air. You can control the vine’s movement and try to aim it towards the nearest island. If it doesn’t reach, there will be more budding off of the one you just made, so you can select which one you want to grow next. Since the plant’s growth is controlled by the player, everyone’s Star Plant will be unique. You can choose the most direct path to each island, or you can play around and create a massive plant with arching, intersecting vines growing every which way.

To climb, you’ll have to control BUD, and this is probably the most entertaining aspect of Grow Home. His body parts move around freely as he walks about, affected by physics rather than predefined animations. This gives his movements a wobbly effect, almost like he’s drunk. Quite often while I was playing, BUD would suddenly tumble over himself, start spasming, or flail about wildly. This usually didn’t affect his momentum or cause him to fall or anything, so rather than being frustrating, it just made me laugh. He was genuinely fun to watch.

BUD is able to climb on any surface, using the shoulder buttons (if you’re playing with a gamepad) to control each of his hands independently. The climbing, combined with the procedural animation, kind of reminded me of the controls in GIRP or Octodad, except it feels like you have a little more input over your character this time around. You lose some of that control while walking, though. I found BUD’s movement while walking to be rather slippery and awkward at times, causing me to slip involuntarily off of islands or vines, but usually this could be prevented by jumping or grabbing hold of something at the last second.

He can also use the local flora to move around more efficiently. Large leaves and mushrooms can bounce him high into the air, flowers can be used as parachutes, smaller leaves can be used to hang glide, and several other plants have strange effects as well. You can keep the flowers and small leaves in his backpack for later use, but can only carry one at a time. You’ll want to take advantage of all the different plants at every opportunity, because they make scaling the Star Plant and traversing the islands a breeze. 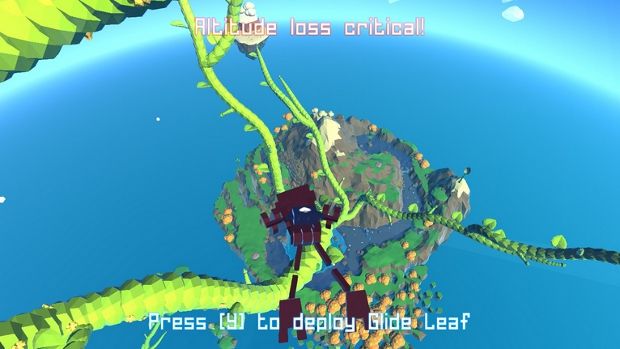 Aside from growing vines, there are also crystals scattered around the islands for you to collect. There are 100 crystals total, and BUD will earn upgrades upon collecting certain numbers of them. At 20 crystals, you get a jetpack, which is immensely useful. Most of the other upgrades involve beefing up the jetpack, so it’s not a waste to go out of your way to find a few crystals.

Since you’ll be doing a lot of climbing, you’ll want to be careful not to fall too often. Luckily, there are teleportation devices which allow for fast travel, so you won’t have to start all over from the bottom of the plant. You can die from falling too far or falling into the water, but there’s really no penalty. A new BUD will appear in the last teleportation device you used, while the old BUD’s body remains scattered in pieces where it fell. Sometimes, I actually found it quicker to just fall to my death rather than climb back up a vine. There’s even a self destruct button you can use in those situations, too. 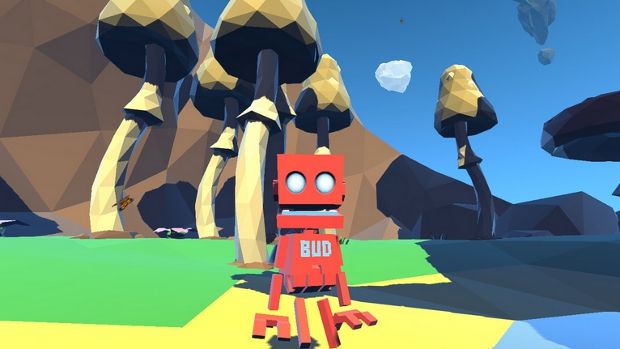 I only encountered a few problems during my time with Grow Home. Sometimes while climbing, the camera would freak out or clip through the terrain, which was kind of disorienting when you’re really high up. This was especially bad while climbing on cave ceilings or the undersides of islands. I also noticed that it will start to stutter if you grow too many vines. This shouldn’t be a problem if you’re playing normally, but I really wanted to see how many vines I could possibly grow, and apparently that was a bad idea. None of the problems I encountered were too serious, though.

You can probably get a good three to four hours of gameplay out of Grow Home, and more if you decide to search for every crystal and seed. It’s relatively short, but it oozes charm and personality. I got more than enough enjoyment out of exploring the world, free falling through the vines, and watching BUD be all adorable and weird. If you’re still unsure, just give it some time. I bet it will grow on you.