We live in a privileged age indeed. Less than years ago, something like Grand Theft Auto III was amazing to behold on a home console. Its size, sense of freedom, and explosive production values were so amazing, one could scarcely believe it was running on a PlayStation 2.

Now, we can get that on our mobile phones.

Gaming has come a ridiculously long way in the ten years since Grand Theft Auto III first released, and the fact that such a game is now available on iOS devices is nothing short of amazing. 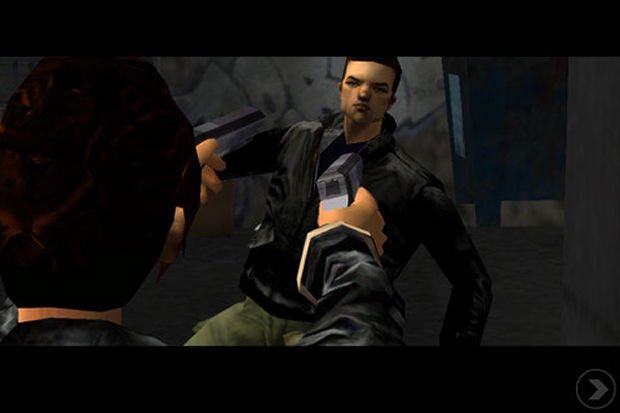 Grand Theft Auto III effectively defined an entire genre of game, one so popular that many games today still desperately attempt to ape its success. The open-world “sandbox” style of game may seem like a dime a dozen today, but back in 2001, the idea of a living, breathing, 3D city was staggering. We’re used to it now, but opening up such a game on an iPhone or iPad goes some way toward bringing that magic back.

As the silent Claude, players are busted from a prison transport van and let loose into Liberty City. An increasing variety of missions unlock as players undertake jobs from a rogue’s gallery of nefarious crooks, but they can always earn money by driving taxis, posing as paramedics, or just beating people to death and robbing them. Doing these things still carry that simple, often sadistic, satisfaction that it had a decade ago, with GTA III proving once again that being the bad guy is jolly good fun.

The 10 Year Anniversary edition of GTA III is more than a simple port. The game has been enhanced with fresh graphics, improving the look of characters and vehicles. While the game is still obviously dated in the visual department, the higher definition and richer textures make for a far more visually appealing game than fans are used to. Nothing has been skimped in the shrinking process either — radio stations are all present and correct and cutscenes are fully voiced. This is Grand Theft Auto III in its entirety, only better looking, and tweaked to work with touchscreen controls. 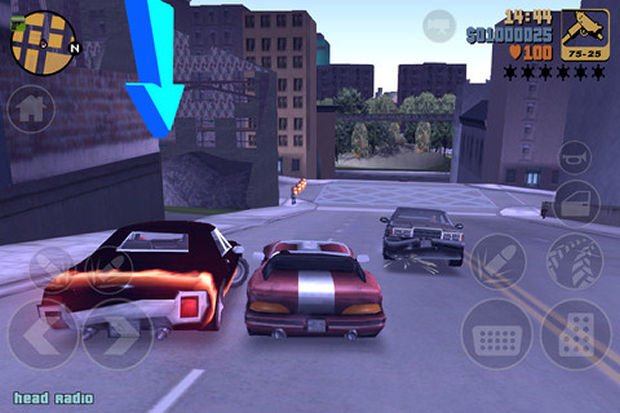 The touchscreen controls, however, are something of an issue, providing by far the biggest barrier toward enjoying this updated release. Despite a range of control options that make use of both the screen and the iOS device’s accelerometer, there’s no comfortable way to play the game. Be it walking or driving, every control scheme has its own set of unique problems, contributing to a more difficult and frustrating experience.

There’s no fixed virtual movement pad while walking, the screen instead placing one where you put your thumb. While such input can work in certain titles, I feel this particular game would have benefited more from a definitively placed pad, as allowing it to appear anywhere in such a densely packed screen often leads to one’s thumb dragging off the device while trying to walk. The camera is also unhelpful, wildly swinging to accommodating the player’s awkward movements. Manipulating the camera means placing a finger on Claude and dragging in a desired direction. It doesn’t take a rocket scientist to guess how much the interface can get confused between walking and camera controls.

While driving, one can either use virtual direction buttons to steer, or physically tilt the device, but either choice will be problematic. The buttons are too sensitive, causing vehicles to swerve violently left or right, while the accelerometer isn’t sensitive enough, requiring exaggerated tilts in order to turn a corner effectively. Coupled with the game’s already hyperactive and unrefined physics, this can lead to some annoying driving indeed, especially when racing against the clock. 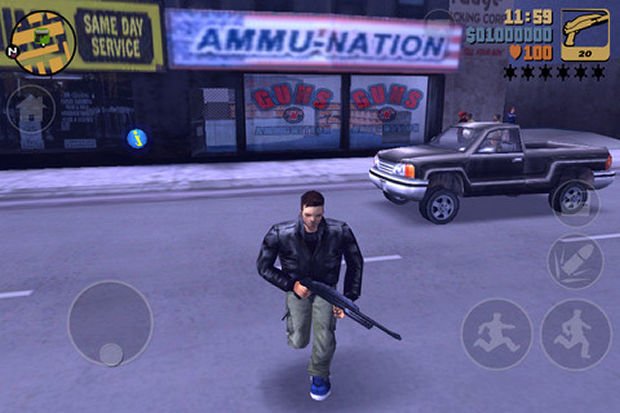 Grand Theft Auto III requires a lot of patience and practice to play on an iOS device, because despite claims of optimized controls, there are similar games on the iPhone with far more effective interfaces than the one presented here. However, those games lack the one trump card Grand Theft Auto III has that cannot be beat — it’s Grand Theft Auto III. Despite the dodgy controls and the very real frustrations present, this is still one of the most outrageous and entertaining games ever developed, and the sheer novelty of carrying it around inside a phone is worth the price of admission alone.

Once you get used to the annoyances, all the fun of GTA III is still in place. You have to work a little harder for it, but it’s all there. All except for cheat codes, unfortunately, which means that you can’t spawn a rocket launcher and go crazy like you used to. With a little luck, future updates may bring these back, because let’s face it, one of the best things about GTA III is dropping a tank from out of the sky and crushing cop cars.

For a mere three bucks (Edit: This is a current sale price, regular price is $4.99. Sorry!), Grand Theft Auto III 10 Year Anniversary is very much worth picking up, even if its controls could use an overhaul. Once you get used to its awkward input, the sheer joy of riding through Liberty City is nigh impossible to deny, and the improved visuals certainly help. At the end of the day, few games are as iconic and amusing as this one, and to carry it in your pocket is something truly quite special.