I can feel it exploding in the air tonight

Another week, another Switch indie game to be reviewed that falls in a niche genre.

This time it’s the timed exclusive Graceful Explosion Machine — a colorful score-driven space shooter that many people have compared to Geometry Wars upon seeing it. Those people are wrong, as it has more in common with Defender or Fantasy Zone. Plus it isn’t a twin-stick shooter at all.

If the popular boy band Smash Mouth made a space shooter, I’d imagine it would turn out something like this. 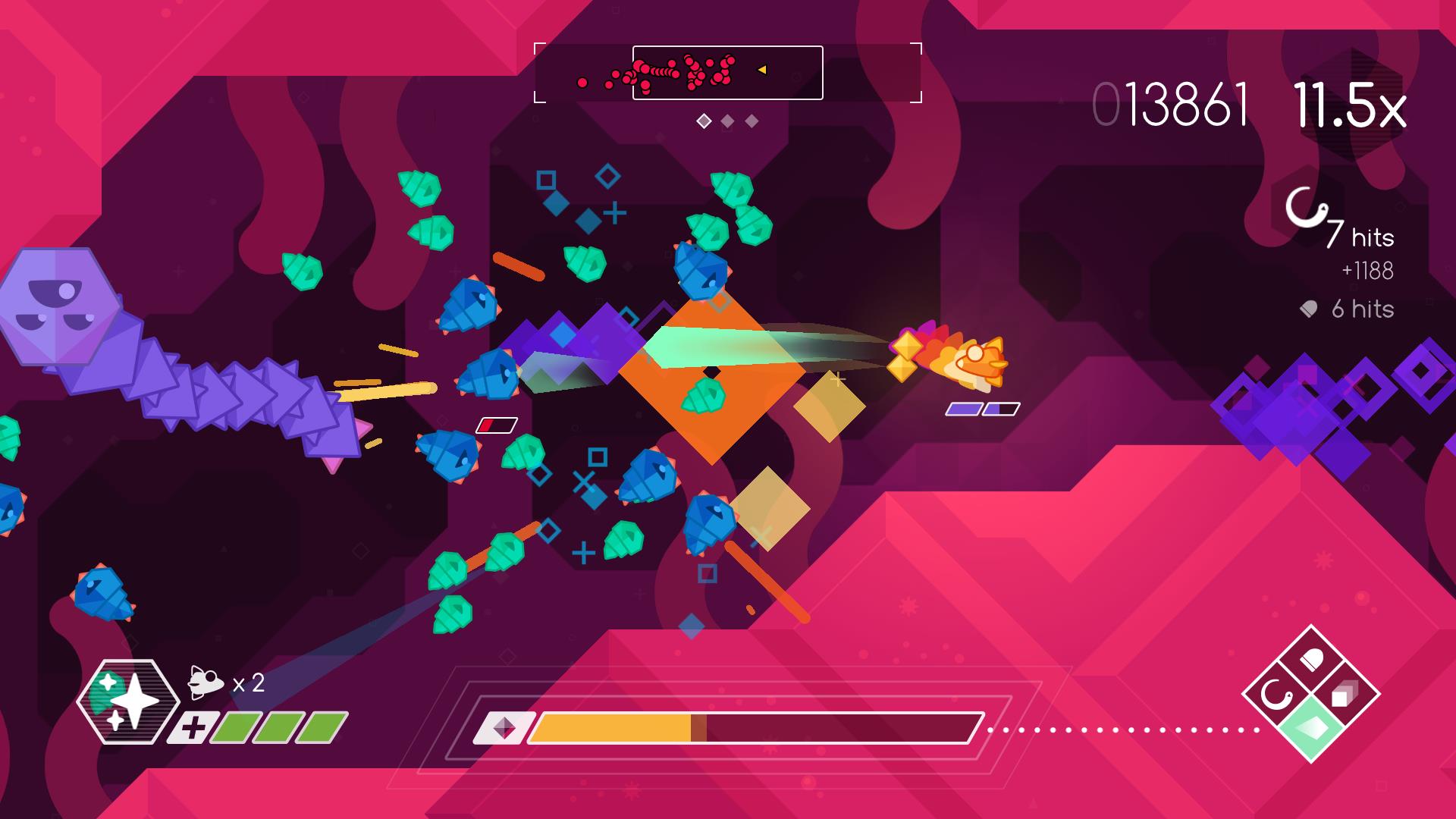 In Graceful Explosion Machine you’re tasked with murdering aliens across 36 levels that span four different worlds. To do this, you’ll use one of four weapons each mapped to its own button. There’s a basic blaster that shoots in a straight line and can overheat, while the other weapons use a power gauge that can be refilled by picking up yellow crystals dropped by slain enemies. These weapons include an energy sword that slices in a circular motion around the ship for two full rotations that not only kills enemies but also their bullets, a sniper beam that reaches all the way across the screen and does massive damage if focused on one enemy, and homing missiles.

Each weapon has specific enemies and scenarios for which they are most effective. The energy sword is great if surrounded by swarms of enemies, or if there are a lot of bullets on the screen (although that is rarely an issue as most enemies do not shoot projectiles). Missiles are useful for hitting fast-moving enemies and can be used to quickly seek out enemies to ensure your combo chain stays intact, pending you care about getting high scores. While there isn’t a ton of enemy variety, I liked that there were at least a few of each type that ensured I’d be using all the weapons in my arsenal other than just one or two I liked. Still, I did find myself using the basic blaster and energy sword more than the others, but that is the nature of the game considering it constantly has enemies rushing you.

As mentioned, this game has a lot in common with Fantasy Zone and Defender in that it is a space shooter where you go left and right, and shoot in the direction you’re facing. Tapping either the L or ZL button rotates the ship from facing one way to the other, giving you a brief moment of firing diagonally or vertically which can sometimes result in clutch bullets that save the day. Levels, for the most part, are interconnected loops, meaning you can keep going left to run into enemies you just passed. It also means there is nowhere to run or hide. This keeps the action frantic and exciting but does little to add to the difficulty, of which there isn’t a whole lot to be found unless of course you really care about high scores.

It bears repeating a few times but if you don’t care about high scores, maybe Graceful Explosion Machine isn’t for you. The entire game can be finished in around three hours by experienced space shooter players. There isn’t really a story to speak of aside from a few brief introduction and ending images and not a whole lot changes from beginning to end other than a few more enemies being added to the mix. If scores do matter to you, there are leaderboards per level that can be sorted by friends, worldwide, or players near you, as well as four additionally unlockable challenge levels, and the ability to run each planet’s levels back to back as one long run that keeps your score multiplier going between levels. Otherwise, that is it.

As far as the technical bits go, the graphics are colorful, the game seems to run at or close to a steady 60 frame per second (or at least it seemed that way to me), be it in docked or undocked mode, and the synthesizer-heavy soundtrack is made up of hum-worthy tunes. The leaderboard system works about how you’d expect it, though you have to manually upload each score at the end of a run by pressing a button, which seems odd in this day and age of automated leaderboards.

Oh, and HD rumble is still a highly overrated feature of the Switch, as the difference is barely, if at all, noticeable here. It is also strange that most of the time the controller rumbles just when you explode enemies, so it’s almost constant — though not enough to be annoying. 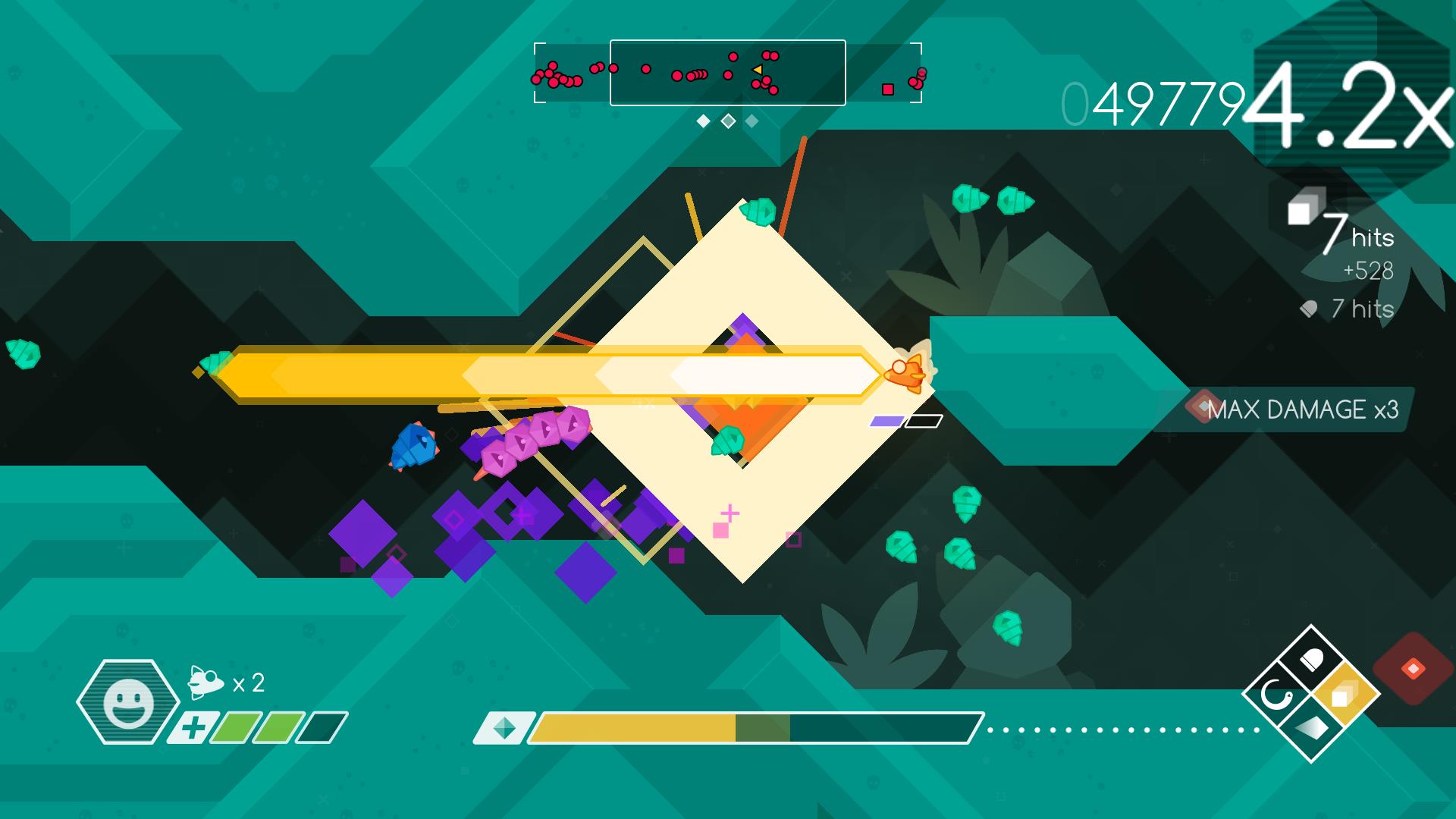 It is worth noting that the way the screen moves isn’t a 1:1 copy of the way your ship moves, which made me feel a little queasy while playing on my 55-inch TV. That said, Graceful Explosion Machine‘s repetitive score-driven nature lends itself better to portable mode anyways, as this is one of those games that feels great to pick up for a level or two in your downtime instead of something you’d want to play straight through while sitting in front of your TV.

For $13, Graceful Explosion Machine is a fun little space shooter with nice visuals and audio that is worth your time and money if you’re a high score hound. Even if you’re not, there are far worse games on the Switch currently, and not many that only ask a few minutes of your time to complete a level, which makes this the perfect game to play on the go. It’s pretty good.