Last year, James Bond returned to videogames in both GoldenEye 007 for the Wii and Blood Stone for the PS3 and 360. In a change from the standard outcome when a franchise hits multiple platforms, the Wii game was the one that was more polished and more fun to play. Even more surprising is the fact that GoldenEye 007 was a perfectly satisfactory follow-up to its namesake and by far one of the best FPS experiences on the Wii.

Of course, even before GoldenEye 007 came out, people were crying foul that it was a Wii exclusive, mostly because people like to cry fowl whenever they get the chance. All those fowl criers can stop now that the game has come to both the PS3 and the 360 in glorious hi-def with a new engine, extra content, and a more robust online component. 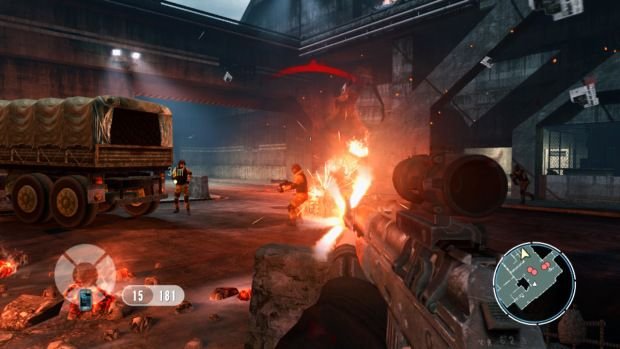 This review is going to feel a little bit like a DLC review; in all honesty, the single-player aspect of this game is exactly the same except for the graphical improvements and new hidden medallions to collect. The new stuff, the MI6 challenge mode and multiplayer content, could easily be considered robust DLC if they were delivered digitally post release. That explained, if you really want to read a full review on the single-player, just head on over to my original Wii review because most of what is in there still stands. This is the exact same game reworked for more powerful systems.

There are, obviously, some changes in the single-player experience. This isn’t just a straight port with “upgraded” graphics that don’t actually look any better, but the same game based on a much more powerful game engine. While I thought the game looked perfectly fine on the Wii, and I’m no graphics whore, I must say that playing through the exact same only much prettier levels is not something I’m going to complain about. The new engine and more powerful platforms not only make the graphics more “hi-defier,” but also make the levels feel more alive. Details like rain, water effects, and improved lighting just make levels pop in ways they couldn’t on the Wii. In fact, the night club section I raved about in the Wii’s review looks absolutely fantastic thanks to the fact that the engine can handle more things on screen at once. So when the entire scene slows down and the debris starts flying like in a John Woo action scene, it looks really, really good.

Compared to the Wii, that is. Graphically, the game is no slump, but it isn’t stand-out either. As I said, this isn’t a Wii game polished up, but that doesn’t mean it’s one of the best looking games out now. The graphics are definitely middle of the road overall, and while they look fine, you won’t be blown away by anything. This is especially apparent in the textures, which don’t seem to have gotten as much love as the lighting and other aspects. 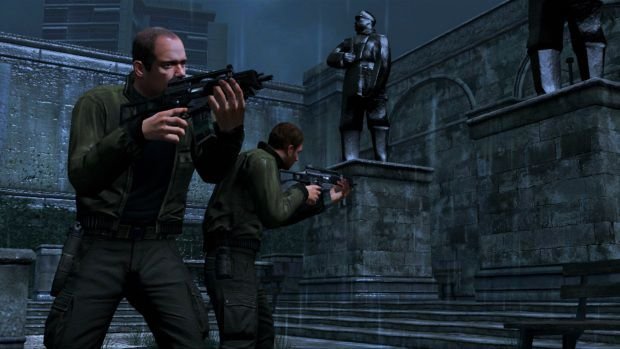 Now, on to the new part. The major addition to the game is the MI6 Ops mode, which is basically a bunch of challenges for the player to try to complete in the fastest time they can. There are three types of challenges (and an extra one that unlocks): stealth, defense, and elimination. All of them take place in slightly varied sections of single-player levels or in multiplayer levels. The modes are all pretty much exactly what they sound like. “Stealth” involves getting through levels without alerting any guards. “Defense” tasks the player with downloading information from three computer terminals while waves of enemies attack; each terminal takes three minutes to download from while enemies flood in at set time intervals during. Finally, “elimination” has the player attempting to kill every bad guy in the level as quickly as possible. By completing challenges fast enough or on high enough difficulties, you’re awarded with a higher score which gets you more stars which in turn unlock more challenge levels.

It’s pretty standard stuff as far as challenge modes go, but what sets it apart from most others is in how adjustable the challenges are. Instead of simply having easy, medium, and hard settings, difficulty is set by a plethora of variables the player can adjust before jumping into the challenge. You can pretty much adjust everything from enemy damage to rag doll physics. Bump up the enemies strength and you’ll get more points as you start the level off. Remove your radar capabilities and your score will go up. Increase your own life and your starting score will go down. Implement paintball mode and… well, nothing happens, but it’s way more fun. Thus, to get the best score, you have to balance out challenge and time. Make it too hard and you won’t be able to complete it in any decent amount of time, too easy and you won’t start off with a high enough score.

In theory, it’s a great idea, but from my play, it seemed like completion time outweighed challenge points by too much. Thus, beating the game on a really difficult collection of settings wasn’t as good as speeding through it on an easier setting. There’s no way of really knowing this ahead of time since it’s unclear how the time scores work; believe me, it’s incredibly annoying to redo a level over and over on a difficult settings just to have it not pay off in as many stars as you thought it would. I suppose the online leaderboards help to assuage this annoyance since you’re competing against others, but I’d rather have a better idea of what I’m going to score ahead of time. 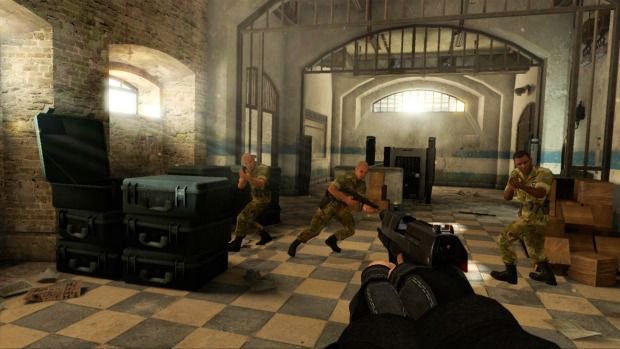 MI6 Ops isn’t the only new stuff in the game. Multiplayer has not only gotten a graphical overhaul, but also four new maps and a plethora of new game modes have been added. Some we’ve seen before, like Elimination where players progress through a pre-set series of guns each time they take someone out, but with a Bond twist since slappers melee is the final weapon. Others are a bit fresher, like Data Miner, where one player has to download data while he fights off all the others, and every kill he makes increases his download speed. I have to say the online multiplayer is quite fun, and thanks to the fact that more of the random multiplayer options are present in this version, it feels a whole lot more old-school GoldenEye when you’re online.

Of course, all of the random fun settings (paintball, golden gun, etc.) are back in multiplayer in this version, but Eurocom has also included some other random stuff, like a mode where Jaws’ metal teeth can deflect bullets or Dr. No’s metal arms prevent him from taking damage from shots to the arm. The game also features more Bond villains to choose from, including Tee Hee, Max Zorin, Auric Goldfinger, Dr. Kananga, and Hugo Drax (exclusive to the PS3). All these definitely make the game a bit more fun, but again, they can’t be considered much more than DLC to an already complete game.

I should note that the PS3 version has full Move support (in fact, there’s a special edition that comes with that big gun thing and all the Move accouterments) and, well, it works. I played most of the game with a standard controller since I don’t own a Move and had to borrow one. Just like the Wii, though, the Move controls function and are fun to play with. So yeah, Move works. 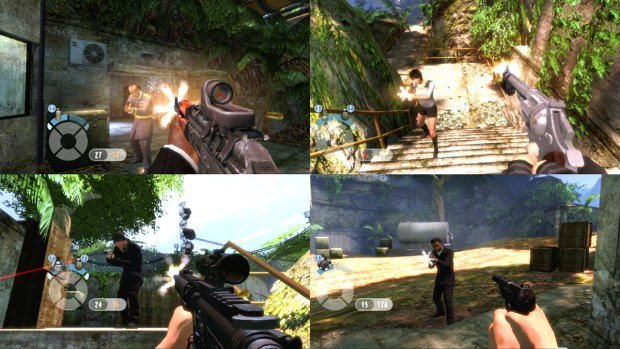 The question then becomes (if you haven’t already played the game on the Wii) why would you pick this up over the plethora of other FPS out there that are admittedly better in almost every aspect. Do me a favor and walk over to your game collection to check the back of all your FPSes for how many players can play at once on one console. I’ll put good money that the majority of your FPSes don’t allow you and three other friends to sit around in the same room and shoot each other. Four-player split screen just doesn’t show up on the PS3 and 360 anymore, but it’s here in GoldenEye 007: Reloaded; just like the Wii version, it’s plain fun to play with your friends in the room. Yes, the same flaws exist in the rest of the game, but with the ability to split your screen into four equal parts and shoot your friends in the same room being such a rarity on both systems these days, I would argue that Reloaded sets itself apart from the pack in a major way by actually having what should be a standard feature.

With Reloaded, you’re basically getting GoldenEye 007 plus a bit more. This leaves me in a bit of a quandary when scoring the game. Technically, it should get a higher score than its Wii counterpart since its graphics are better, it has more content, and its online is more robust. However, I can’t say that any of this actually makes the game any better, it just makes for more of it. More of an 8.5 is still an 8.5.

What it comes down to is that, if you own this on the Wii, I can’t really see that big a reason to pick up this version. If you don’t own it, however, this will be a great acquisition to actually get some split screen action on your hi-def console while also getting a really solid game at the same time. I understand it’s the holiday season and there are a plethora of other games to pick up, but if you come across GoldenEye 007: Reloaded a little down the road when the influx of games has passed, and if the price has dropped a bit, you (and your friends who can finally play videogames with you when they come over) won’t regret it one bit.