There are no easy answers

Gods Will Be Watching is a tough game. It puts the player in positions that they’d rather not be in and asks them to make difficult choices. In order to succeed at a mission, you may have to do unthinkable things, betray your morals, and become a monster just to survive a little longer.

It’s also tough in another sense: the game is bloody hard. 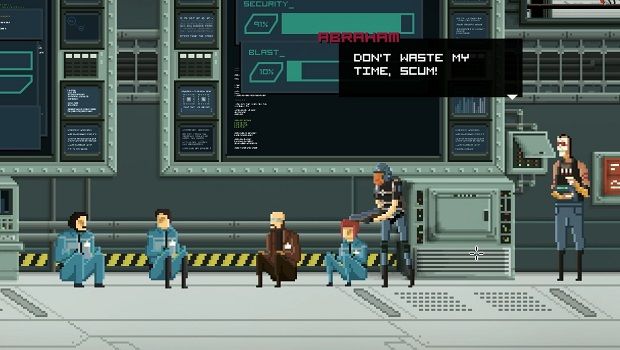 Gods Will Be Watching is one of the most grueling gaming experiences you can have. It puts you in charge of characters who are in a real tough spot and tasks you to simply survive. It’s not easy and you’ll gnash your teeth at the frustration of it all but it’s worth grinding through — there’s a good story here about survival, camaraderie, and what a person will do to stay alive.

Set against a backdrop of rebellion in an oppressive intergalactic empire (they’ve banned coffee!), Sgt. Burden must keep his group of researchers alive while stranded on an icy planet. The narrative jumps around between different time periods so pay attention, as there’s some plot details that are easy to miss if you’re just clicking through all the dialogue.

The game will put you in a number of scenarios that you’ll have to “manage,” for lack of a better term, to succeed. Although Gods Will Be Watching controls like a point-‘n’-click adventure game, it doesn’t play like one. The challenge comes not from puzzle solving, but from keeping track of different factors in the scenario that you have to balance to succeed.

Take the opening situation, which sees you control a Xenolifer rebel called Abraham. He’s tasked with keeping a group of hostages under control as the rebel leader Liam tries to hack into a secure database. While he’s doing that, a security team is slowing inching its way forward and if it gets to the door, it’s curtains for the rebels.

The key here is balance. You need to make sure the hostages are fairly calm — but not so calm that they get confident and try to take Abraham out — and not too scared that they decide to make a run for it. You can berate and kick them to keep them in line and even shoot them in the legs if you decide it’s necessary.

Rebel member Jack is keeping watch at the door and can fire a few shots to get the security team to back off or try and threaten them to stay put or the hostages will die. The former will scare the hostages but will force the security team to retreat while negotiating will make them hold their position but won’t rattle your captives. You must maintain the situation while Liam is hacking the database and it just feels like it takes so long for that progress bar to move on.

Let’s get this out of the way here: you will fail this mission the first time you try it. You’ll also fail the second time, the third, and most likely the fourth. Maybe at the fifth attempt you’ll get close to completing the hack.

The most important thing to note is the turn process which isn’t labelled on any HUD but shows up on your list of options as either red or cyan. Red options will usually move the scenario forward, like for instance the security team will move along the corridor in the hostage situation if you select a red action. Cyan options tend to have no consequence or don’t put anything at risk, like alternating the security camera or non-critical dialogue options. 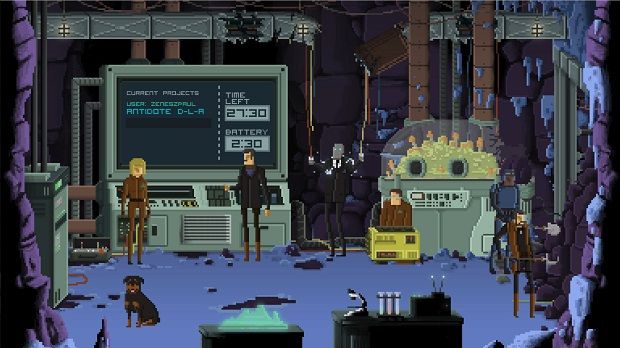 Understanding the difference between the two and realizing that you have a set amount of turns to last, or manage, is key to succeeding. It does take away some of the immersion in the experience though as scenarios become more like working out an optimal order in which to have your actions play out.

That’s not to say that there’s a fixed way of getting through things as characters’ responses will vary and it certainly doesn’t feel like the same things play themselves out time after time. While each scenario is designed to be replayed, it can get frustrating having to play an entire sequence repeatedly only to fail right at the end.

The story is really interesting, full of intrigue and deception and the dialogue is pretty well written but once you see the same lines pop up again and again, some of that freshness starts to drip away. What also diminishes the drama is the flatness of presentation; while the art style is well executed and colorful, everything is presented in flat text so it can be hard to gauge any kind of nuance or subtlety in a conversation.

This just adds to the mechanical feel of each chapter, which isn’t there the first time you play a scenario; it’s just, each time you fail, the game feels more and more mechanical. There are effective bits of sound design that are sparingly used, including one wince-inducing moment involving a hammer and some teeth. 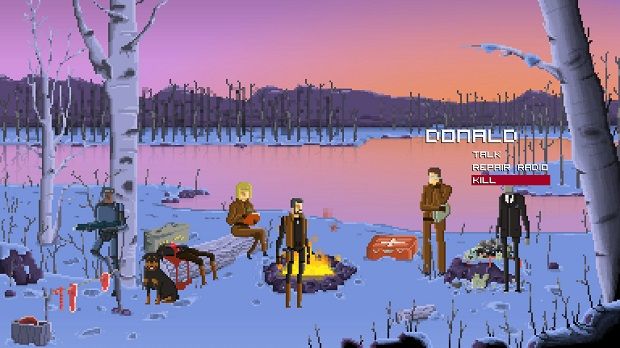 Gods Will Be Watching is a tough sell as it’s a game that only gives out as much as you put into it. When you fail, take a step back, examine the scenario, and work out a better strategy. Then just keep at it and you’ll find you’re able to make progress and unravel a rewarding story.

There aren’t that many chapters in total, so while it’s short in structure you are going to play each chapter over and over again. Achievements add little challenges to each scenario but please don’t try for them on your first round. There is an easy mode which isn’t the default and it’s still rather hard; consider knocking down the difficulty if you start to enter double digits for the first few chapters, at least until you get an idea of what strategy you’ll need.

This is a unique game, presented as a traditional point-‘n’-click adventure title but more focused on strategy and planning instead of puzzle solving. If you push on and don’t give up, you’ll be rewarded — just expect a few heartbreaking moments first.