A tropical resort paradise overrun by dead-eyed, single-minded creatures that vaguely resemble humans, there shambling movements parodying the utter lifelessness all around them. I am not talking about Techland’s Dead Island. This is Go Vacation … something far scarier.

For if there’s one thing more numerous, tougher to kill, and infinitely more deadly than zombies, it’s minigames. 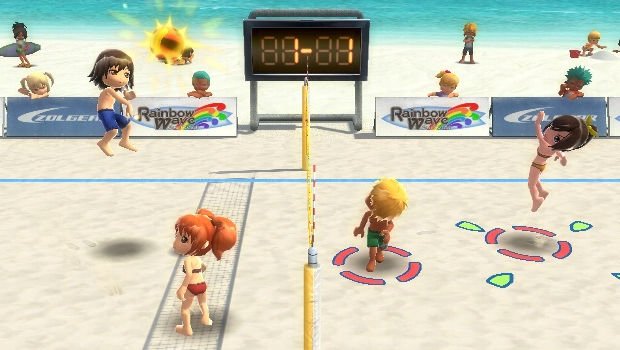 Go Vacation is Namco Bandai’s answer to Wii Sports Resort which, considering Nintendo released that game two years ago, makes it something of a late reply. Nevertheless, Go Vacation presses onward with oblivious optimism, presenting a series of small “open” worlds full of inane activities for players to engage in.

There’s a strange poetry to Go Vacation releasing so near the end of the Wii’s life cycle as it serves almost as a reminder of what the system was all about — collecting as it does practically every waggle-based minigame that the system has encouraged since it launched in 2006. From races with the Wiimote held on its side to simplistic volleyball and dancing games where players convulse on command, Go Vacation has an example of nearly every stereotypical game type the Wii has ever had to offer. Whether or not that’s a good thing depends on how much you love effortlessly moving a white stick around like a trained seal.

In all fairness, Go Vacation isn’t necessarily bad. Its minigames all work as they should, and there’s a lot of content with various extra challenges, unlockable costumes, furniture, and secrets. It’s just that we’ve seen it all before, and usually with a bit more flair than this. Go Vacation is a very slow paced game and while that might be a deliberate concession to the “vacation” contrivance, it doesn’t make for a very exciting time. Races are incredibly tedious, competitive games such as water pistol fights are bland and repetitive, and many of the activities are just vague variants of each other. 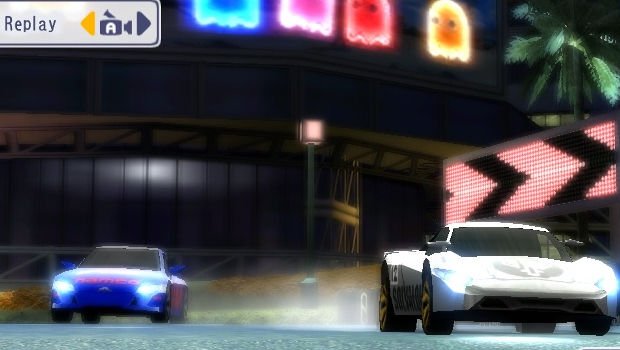 Being a Wii minigame collection, many of the controls are less convenient than they should be simply to conform to the assumed obligation that one needs a minimum amount of motion input at all times. In this case, navigating the resorts is a pain in the neck, with every vehicle requiring players to tilt the controller in order to steer, even if it’s something like rollerblades which need additional hand-pumps in order to accelerate. It would have been far easier to let the nunchuck stick do the steering, but Heaven forbid we don’t get our five waggles a day!

Speaking of inconvenient controls, it’s really a pain in the arse to be expected to keep plugging and unplugging the nunchuck. Some games demand solo use of the remote, while others require the nunchuck, and players will have to keep yanking out the chord whenever the game expects them to. It’s not a huge grievance, but it’s a consistent annoyance nonetheless. There are also optional games that include the Balance Board and MotionPlus, but that’s just more crap to plug in for no good reason.

There’s really not a lot else to say about Go Vacation. It’s a minigame collection full of the same things we’ve “enjoyed” on the Wii for the past five years. They work as well as they always have and there’s a lot to do, but there’s very little to encourage continued play. The games are all rather mediocre, overdone and sluggish, while the faux anime characters in their bland resort environments are completely charmless. 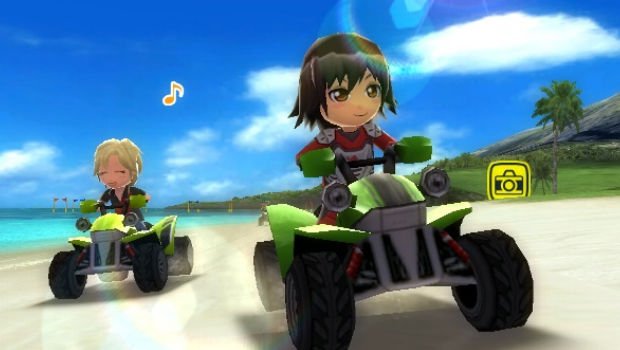 Perhaps this would have been a cute little game half a decade ago, but so close to the end of the Wii’s life cycle, it smacks of Namco desperately trying to milk the minigame cow one last time. As an ironic celebration of the Wii’s most compelling and infamous problem, Go Vacation‘s selection of tepid and shallow activities might serve some amusing merit, but I don’t think even the “family demographic” this is aimed at could find much to enjoy here. To call it bad would be unfair, but to call it anything better would give it more credit than it deserves.