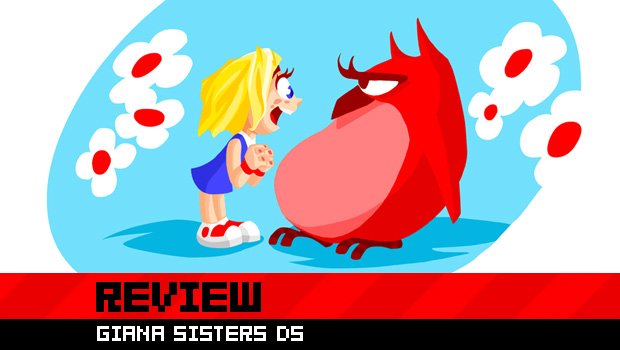 A little over a year ago, I played through an import copy of Giana Sisters DS and posted my impressions as part of my Off-Brand Games series. I had assumed that the likelihood of the game releasing Stateside was slim to none. Scratch that — make it less than zero. We are witnessing a second miracle here.

The first miracle, of course, is that the game was actually developed at all. Giana Sisters DS is a re-imagining of The Great Giana Sisters, a Super Mario Bros. clone released for gaming computers in the 80s and perhaps the most infamous of all gaming copycats. Old Testament Nintendo brought the wrath of The Almighty down upon the original game’s publisher, but New Testament Nintendo chose to demonstrate mercy by allowing an update to not only exist but also be a licensed DS title.

This event may pass the world by without a hint of fanfare, but let it be known that history has been made. To celebrate this occasion, I decided to revisit the game and grant it a proper review. 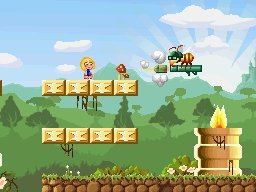 Instead of coins, you collect gems; instead of Goombas, you stomp on owls; and instead of pipes, you descend into wells. The one thing not present in this game is a Giana sister. You only play as Giana, and by collecting a Punk ball, you transform into the fireball-chucking Punk Giana. There is no two-player mode or second playable character. At least Mario games sans Luigi had to good sense to drop the “Bros.” from the title.

There are two other power-ups — bubble gum and soda pop. The former encases you in a giant bubble for air travel, while the later fires a stream of pressurized soda into walls to destroy them. Curiously, activating these moves requires you to tap their icons on the touch screen. The jump and fireball techniques are assigned two face buttons each, and neither the L nor R trigger are ever used. Much like the summoning the reserve item in New Super Mario Bros., there is no logical reason why these functions couldn’t be mapped to a physical button. It’s another case of unnecessary touch features being shoe-horned where they aren’t needed.

In the game’s favor, the art style is very vibrant and clean. The soundtrack, while nothing mind-blowing, is very chill and pleasant. The audio team did a great job of recapturing that distinctive Commodore 64 sound — you know, that “Ode to a Casio” chip sound that defined 80s pop music. The main theme in particular sounds like Tears for Fears. Even the theme of the original had a Journey vibe to it. I think it’s pretty boss that this game’s audio could basically be the soundtrack to any 80s teen film ever made. 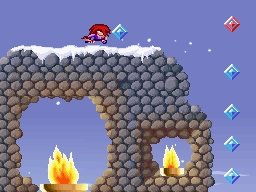 Each of the worlds spans nine levels plus a single bonus level, and all you do is run from one end to the other collecting gems. Obstacles are sparse, and most levels can be completed in less than a minute without letting go of the D-pad. There are six environment types throughout the game, but they are mixed into every world so that no one world has a unified theme. With over eighty levels in total with only the more labyrinthine designs saved for late in the game, tedium sets in quickly.

Aside from reaching the goal, your optional aim in each level is to collect as many blue gems as you can. Collecting 100 gems nets you a 1-up, and you manage to stockpile a healthy reserve in no time at all. It negates any threat the game may throw at you when extra lives are in such overabundance.

In addition, there are red gems strewn about. Collecting all the red gems in a world will unlock that world’s bonus stage. You’d expect these gems to be well hidden, but for the most part they are in plain view right along the main path. It’s impossible to feel a sense of accomplishment when the carrots are basically force-fed to you. At least the Mario games have tight platforming and clever designs to fall back on. 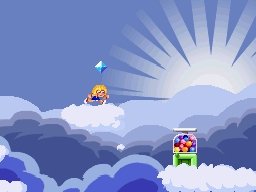 Whereas the New Super Mario Bros. games feel like natural upgrades to the NES originals, Giana Sisters DS feels too rooted in bare bones retro sensibilities. This game ought to be named Collecting Shit because that’s all you ever do. It has more in common with that free Flash game Mission in Snowdriftland than with the spate of enjoyably bizarre platform games available on the Nintendo DS. It plays so disgustingly safe that children who wear reflective clothing and knee pads while sitting on the front lawn at two in the afternoon are more daring in comparison.

I suppose if you were a C64 child, Giana Sisters DS is your homecoming. For everyone else, it’s about as average as you can imagine a game could be. It’s no mystery why Nintendo no longer feels threatened by this shameless pretender.