Murder mysteries are a dime a dozen, but it’s not every day the gumshoe is investigating his own death from beyond the grave. Then again, Ghost Trick: Phantom Detective — the latest game by Ace Attorney creator Shu Takumi — isn’t your everyday game.

For a game about death, Ghost Trick is full of life, with a unique cast of characters, genuinely sharp writing, and fresh gameplay. It’s a great way for Capcom to kick off the new year, and an instant classic that’s bound to be a cult favorite.

Start up Ghost Trick and you’re immediately dead. Shot. Game over, right? Not quite. You’ll come to, but surprise (!), you’re dead, and along with your life went your memory. With no recollection of who you are or who planted a slug in you, you’re compelled to solve your own mystery.

In your death, you’re faced with a good news/bad news situation. “Good,” it turns out you’re blessed with paranormal powers which give you the ability to possess and manipulate objects in the real world. The bad? Well, you’ve got a short amount of time to solve your mystery, because when the sun rises, you’ll disappear completely. Ghost Trick is broken up into chapters, different scenarios in which Sissel (that’s you, the dead guy with the funky hairdo and fancy red suit) must use his ghostly powers to not only piece together puzzles, but even change fates.

In the game’s ghost mode, time stops, and you’re able to move your spirit — a glowing, blue flame — into different objects scattered about the environment. Sometimes you’ll have to activate an object, like turning on a light or moving a cart, to catch the attention of folks in the real world or manipulate their actions. Other times you’ll just use them as vessels, moving from one object to another in an attempt to reach a destination or get closer to conversations that may provide clues. 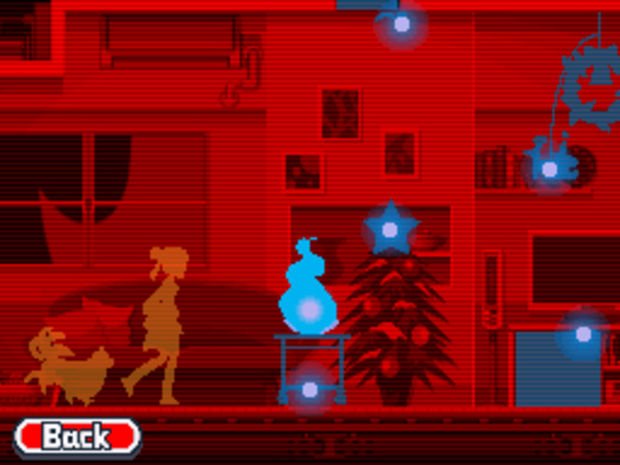 The bulk of the game’s challenge and puzzles, however, come from using your ghost tricks on the newly deceased. By doing so, you’ll not only be able to communicate with the recently passed, but you’ll be able to rewind time to four minutes prior to their death. This gives you the chance to change their fate by using your ghost tricks, sort of a reverse Final Destination situation, if you will. With only four minutes to change the course of history and save a life, you’ll have to quickly hop around and manipulate objects to influence the outcome of a scenario. It’s a mixture of clever thinking, trial and error, and timing the manipulation of multiple objects concurrently that leads to success.

It’s a game of environmental puzzles, sort of like the board game “Mouse Trap,” with a clear end goal in every situation. The way the objects and the characters in the game world react to your ghost tricks is relentlessly clever, full of “ah-ha!” moments and satisfying outcomes. Entering the ghost world, you’ll be presented with a handful of haunt-able objects, clearly marked in the game world; there’s very little excess here, so it never gets overly complicated. That said, the game’s chapters and scenarios can feel a bit linear — there’s basically one path to you goal in every situation, with not much wiggle room for creativity on the player’s part. 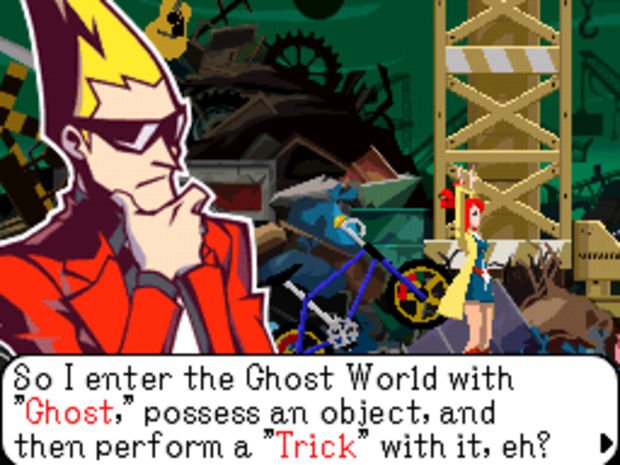 As direct as some of the puzzles can be, that doesn’t mean they’re not a joy to suss out, and I still wanted to work them through in order to access the next chain of events and move the story forward. Ghost Trick is not a game that can easily be put down, thanks in part to its smart writing, witty dialogue, and a cast of characters that you’re sure not to forget. It’s a world full of style, color, and personality, one that (for better or for worse) will inspire cosplayers for years to come.

Despite its linearity, Ghost Trick still is going to provide you with anywhere between eight and ten hours of gameplay and story, each hour more compelling than the last as the mysteries unfold. It’s a completely fresh experience on Nintendo’s handheld, or anywhere else for that matter, and certainly not one you’ll want to skip.