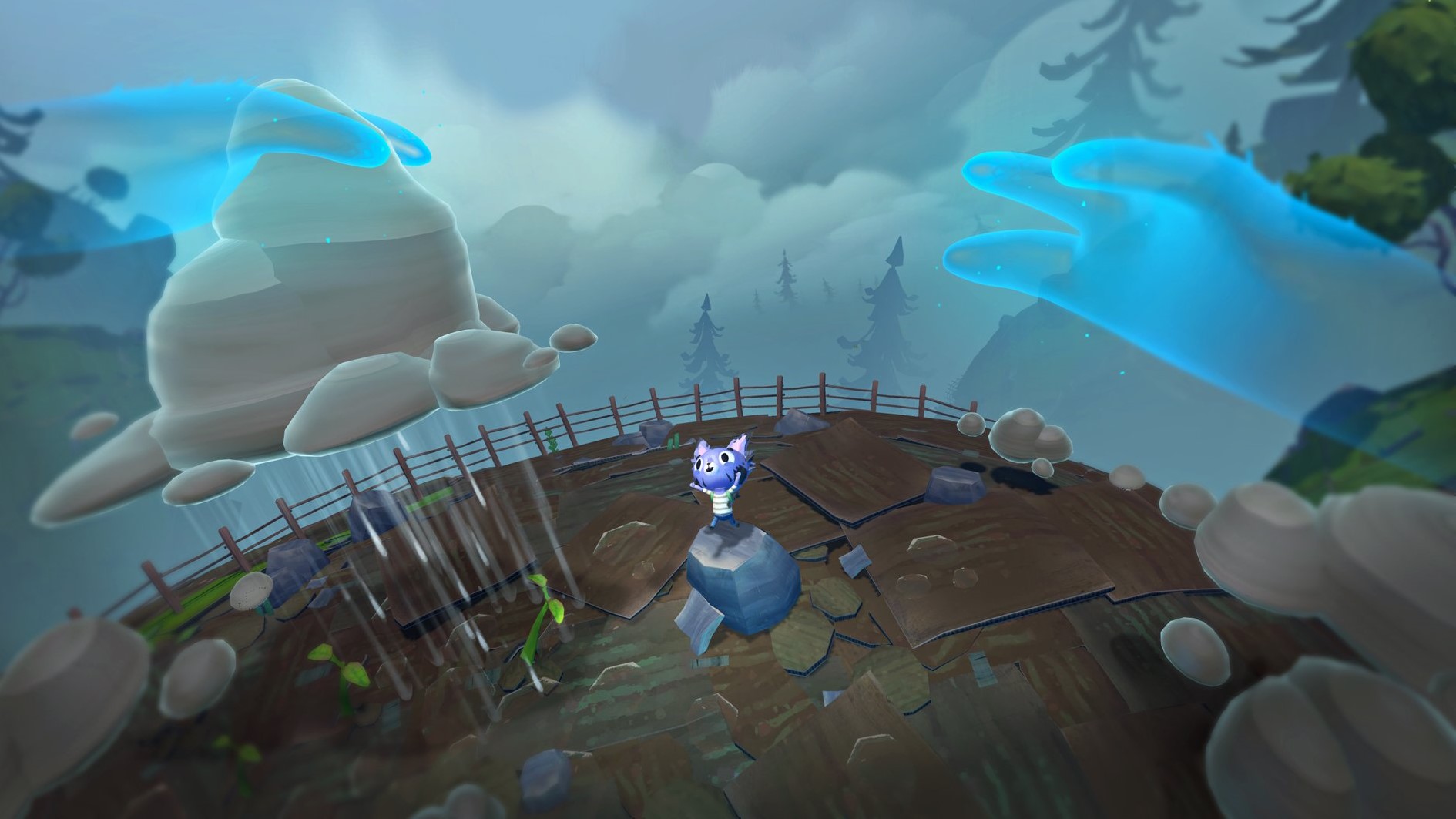 VR adventure games seem to be at their best when they let the player loose to mess with the world of their own accord. You don’t lose any desired immersion when you acknowledge the player as an outside force acting as they please. In the case of Ghost Giant, the outside interloper, the player, takes control of a literal giant ghost.

As this spectral giant with two equally massive arms controlled by the PlayStation Move controllers, you’ll interact with the diorama-like sections of this tiny pastoral town to assist and freak out anthropomorphic animals with your ghostly powers.

The story feels surprisingly heavy for a title whose gameplay loop is so decidedly silly. Ghost Giant follows Louis, a young boy and the only person who can see your titular character. Louis lives on a small farm just outside of town with his mother, but something isn’t right. You never see his mother leave the farmhouse and whenever an adult asks Louis about her, he does his best to dodge the question. She’s either fishing down by the river or in bed with a sprained ankle.

Whatever the situation, something isn’t right with Louis’ caretaker, and he needs your help to keep up on the farm work. This means everything from plucking dead flowers to giving his car a push start so he can get into town on his own.

From a gameplay perspective, you’re essentially propped in the center of each of the game’s diorama-like sections and tasked with helping Louis progress. You can interact with anything with a bronze fixture. That includes large cranks used to turn buildings around and look inside, parts of roofing you can pull off, and even lifting and moving sections of road to help our plucky young Louis keep moving. Tucked away in each section are collectibles like hidden little bugs and pinwheels you need to lift up and blow on which serve as a weird reminder that the PlayStation VR headset has a built-in microphone.

Some of the smartest things to discover in each area revolve around Ghost Giant‘s sound design. From the far-off distance, you can hear murmurs and goings-on among the city streets. Lean in, and you might catch an entire conversation, peer through a window, and see one of the townsfolk dealing with a personal dilemma. The world feels lived-in if you’re willing to take a minute to poke and prod at it.

On more than a few occasions during my playthrough an object would freak out and I’d have to recenter my camera before I could pick it up, but history tells me this is more of an issue with PlayStation VR’s limited hardware tracking and less to do with the software itself. Any issues were easily resolved with a quick recalibration, so I never had to exit the software entirely.

The entire story takes only a few hours to get through; I did it in one four-hour sitting with little trouble as far as getting through any of the puzzles. As long as you don’t mind grabbing at and tossing aside everything you can, you’ll find the solution to any problem at hand. If you do feel stuck, you can always poke Louis to get a hint. (That, or poke a random citizen to freak them the hell out.)

Ghost Giant isn’t revolutionary. It feels like a VR advancement of a classic PC point-and-click adventure game, albeit one with a great look, phenomenal sound design, and a story I’m not ashamed to admit had me choking up a bit toward the end. You won’t be blown away by the immersion here, but it’s fun to interact with the dollhouse-like sets and just sort of goof around. Like a lot of VR titles, Ghost Giant is a shorter experience, but it’s a solid one that tells a charming story in a vibrant and colorful world.