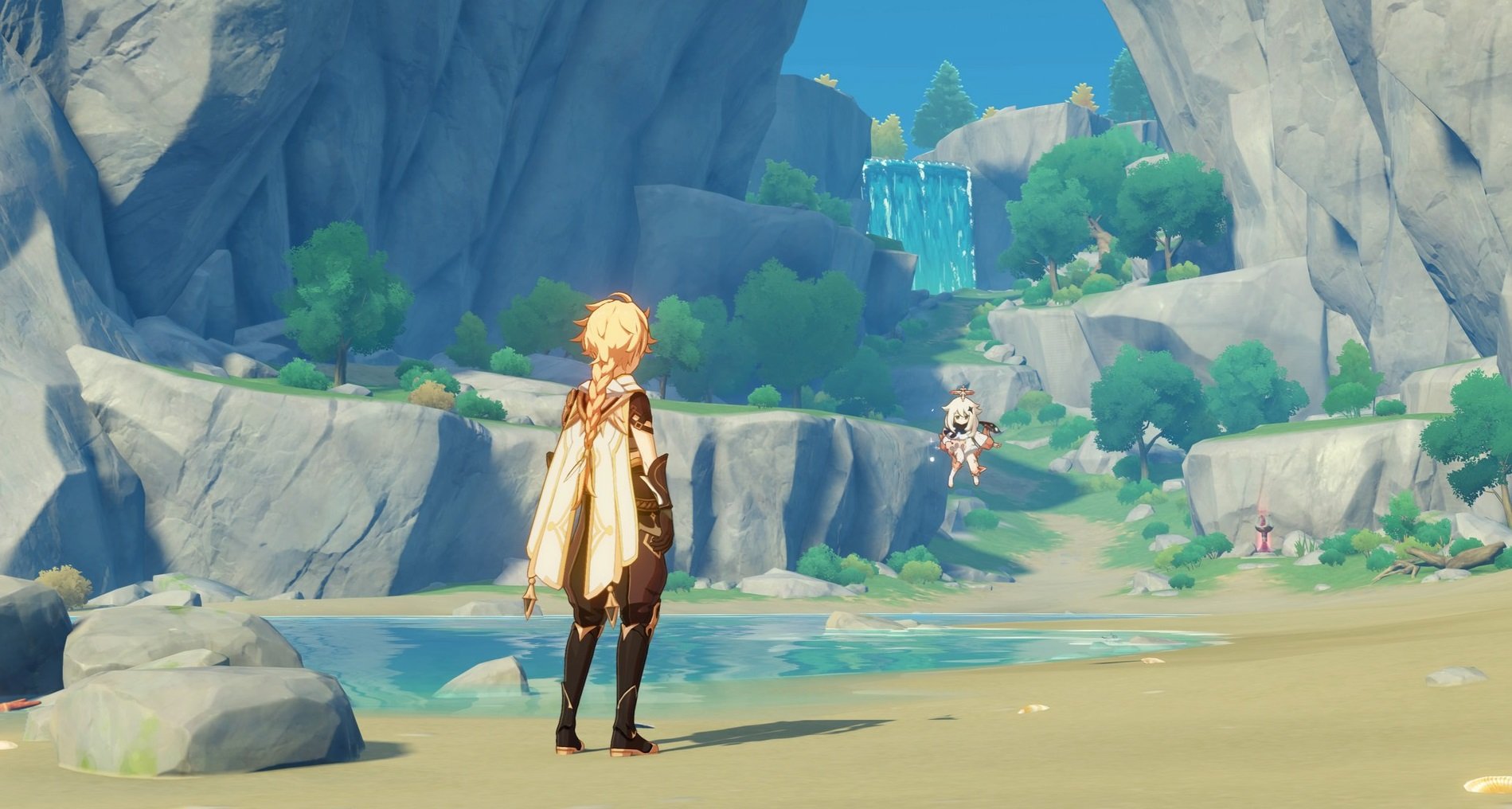 Early on, Genshin Impact was met with a mixed reception due to how similar it was to Zelda: Breath of the Wild.

Having finally played it, I can say that it’s a lot more than a clone — even if it doesn’t fully live up to its inspiration.

From the get-go, Genshin Impact makes an effort to differentiate itself.

The premise involves two siblings traveling through mysterious lands (kind of like Planeswalkers in Magic: The Gathering, really): only to be halted by a powerful God-like being. Whichever sibling you choose as the main character (boy or girl) gets whisked away to a magical land, while the other gets captured. It’s your job to make sense of the world you’re in with your extremely-anime-fairy-like companion Paimon (who squeaks at you in multiple languages, including English or Japanese) while pondering what became of your kin.

It’s surprisingly straightforward for a JRPG plot, as you’re literally learning the ins and outs of Genshin Impact‘s world alongside of its protagonist. While the exposition can get a little heavy-handed at times, it’s all easy enough to follow and there are some very interesting characters and deep cuts to be had throughout the journey. There is even an air of lore-heavy titles like The Elder Scrolls series, perhaps best encapsulated by the many (readable) books and tomes scattered about the land that help optionally fill in some gaps.

Mechanically, it’s going to be a bit familiar, but perhaps it has more in common with JRPG DNA than strictly “Breath of the Wild.” Sure there are similarities, like periodic cooking pots, enemy camps that grant a chest as a reward, a stamina meter, a gliding mechanic, towers you can fast-travel to that fill in the world map — but Zelda didn’t invent open world radio towers or everything above.

The more you play Genshin Impact, the more it becomes its own thing. It can turn into a flying rail-shooter. You can acquire party members that can be instantly swapped in at any time, which sport their own elemental abilities. There are traditional “dungeons” that can be ran for rewards, similar to something like the Tales series. And it looks gorgeous on every platform, with scores of unique character designs. The game is mostly stable on PS4, with some occasional stuttering as it tries to render this huge world.

The combat system might be one of the most interesting things about Genshin Impact, even if it needs time to really blossom. Each character is significantly different from one another in terms of tactics, which is evident very early on when you acquire your first party member: a bow-wielding fire-based archer. Elemental manipulation plays a huge role in the game, as fire can burn down wooden shields, ice can be cast on water to freeze a path, and lightning can be used on water to electrify it.

The “common sense” approach to the elements works in its favor. Combos can be conjured up by placing certain party members together, granting huge buffs in the heat of the moment. Likewise, having a well-rounded crew that can bring multiple elements to the table will help you solve random world puzzles: like needing fire to light up torches to unlock an errant chest.

Now that adherence to diverging off of the path of Zelda is a double-edged sword. The open world feels full when you have quests to do, but when you’re in a transition period (read: when you’re required to level-up before you take the next main quest), it’s significantly duller. A lot of enemies straight-up do not pose a threat or provide ample room to try out a lot of the above action-nuance. Also, one of the more annoying aspects early on is the “world level” concept.

Individual characters can level up on their own, but the world level actually caps off how high they can get, what quests you can take, and what mechanics or modes you’re allowed to utilize. To boost up your world level you need to do quests (when they’re available) or muck about in the open world. As that little meter increases, enemies scale and you get better treasures. Oh, and more stuff opens up — so your fun factor is often directly tied to it.

There’s also a bunch of currencies and meters to keep in mind, in part because this is technically an online free-to-play game that’s governed by microtransactions and a gacha system. To my surprise, it’s incredibly non-intrusive, but it is there. Two of the bigger “real money” things involve gacha pulls (akin to a slot machine) for “starred” (the higher the star rank, the better it is) characters and items and “original resin,” which refreshes the amount of ley line activities you can do (small clear-a-horde style missions that grant bonuses and world level experience).

There’s a delicate balance here, but Genshin Impact never feels like it’s driving you toward spending money when it comes to the critical path. The intention is very clear though, as miHoYo does want to hook whales who will pull gachas until they have all of their favorite characters — but I never had any desire to pay for anything at any point. That might change as one delves further into the endgame, but for the purposes of this assessment (the main storyline), I felt like I got a full experience.

Genshin Impact could be a little more lively than it is when leveling, but the beauty of its world helps suck you in. You really can’t beat free, so long as you resist the rather tame temptations to spend money.

[This review is based on a retail build of the free-to-play game downloaded by the reviewer.]