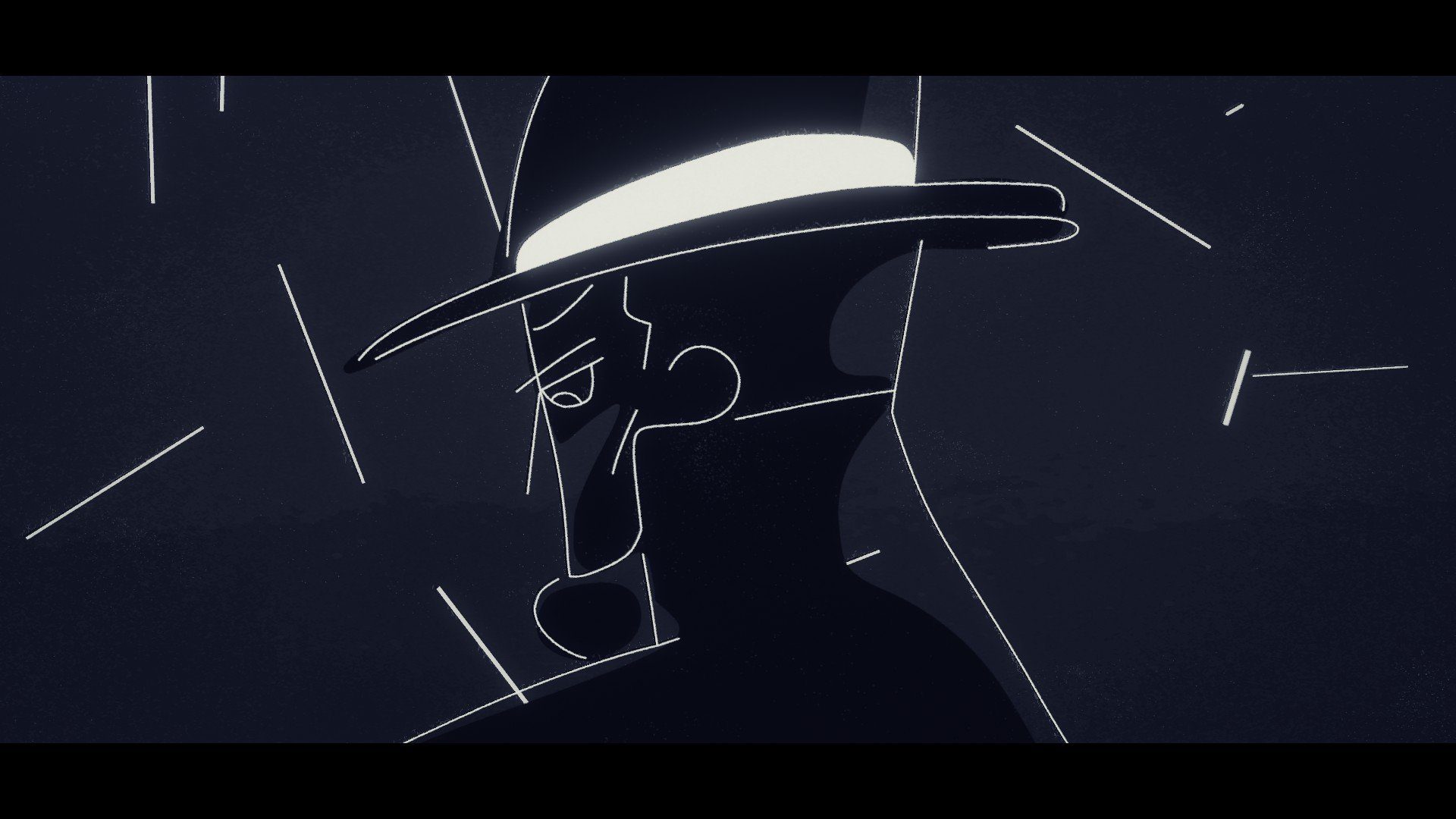 Love and loss at the edge of the universe

There is a start to everything. All conflicts and compassions require a catalyst, but finding the true zero point can range from easy to very, very tricky.

This is the setup of Genesis Noir, an adventure from developer Feral Cat Den that’s both about a night gone terribly wrong and also kind of about the creation of the universe. What’s best described as a surreal exploration of what drives humans—to love, to lose, to lash out and lament—and how we cope with the consequences.

It’s heavy stuff, but it’s all told in a way that’s gorgeous and evocative, and had me constantly in awe of what new audiovisual spectacle it held next for me. It’s a noir story, broken up into vignettes with sparse writing, but in place of long dialogues it relies on fantastic art, music, and discretely designed areas to communicate the journeys of the protagonist, No Man.

First and foremost, Genesis Noir has style. At some points, its style literally oozes across the screen as the protagonist gets swept up in cosmic hijinks and surreal, distorted voids of space and time. Stars twinkle and morph into the silhouettes of characters, and different shapes morph from one into another. It’s really something else to watch this game in motion, even more so when you start manipulating it.

After a short intro, No Man pulls out a number scrawled on a napkin, accentuated with a smack of lipstick. Taking control of him, you dial the number and head over to an apartment, only to find the captivating jazz singer Miss Mass and saxophonist Golden Boy, as the latter is firing a gun at the former.

This is the Big Bang. It is the event you’ll spend the next few hours of Genesis Noir attempting to halt, and prevent the star—rather, Miss Mass—from dying out.

Most of the story is unspoken and inferred. Most of the relationship between No Man, Miss Mass, and Golden Boy is inferred through imagery and symbols. Outside of item descriptions and some dialogue later in the game, Genesis Noir is shown, not told. Visuals like a legendary musician building up an adoring crowd, then lamenting their absence help inform you who these characters are, and what might have led to the events of the night you’re trying to prevent. It’s a simple but extremely effective way of drawing the player in, and I was hooked on every twist and turn, theorizing what a clue I found in the cosmic slipstream might mean for the history of these characters.

Finding these pieces of evidence through individual vignettes is also a visual treat. Genesis Noir is simply striking. It looks incredible in stills and manages to maintain the style in motion, even as it jumps between different styles and settings. The sharp lines of the 1950s can be contrasted against the vast beauty of the cosmos, and then again in comic panel cutaways. Though it plays out in a predominantly black-and-white color scale, colors are used to denote specific points of interest, or to add a little flair to certain objects.

Genesis Noir is built like a traditional adventure game similar to Grim Fandango. Rather than one large world, it’s broken up into individual vignettes, where you walk around trying to find ways to move forward and engage with the occasional puzzle, usually thematic one-shots for each area you’re in, like tuning a radio or mimicking an upright bass player’s improvisations with your own, all in order to progress forward through the cosmic dream and acquire more evidence.

Some of these puzzles get a little more complex, and without dialogue to explain them, they can get frustrating. Usually there are environmental cues to push you in the right direction, but there are at least a few that had me brute-forcing answers. The mouse controls were also not great in these parts—fine-tuning a radial knob or even just spinning the landscape would feel a bit off.

The path to the end is mostly straightforward, as you work your way across the cosmos and through the history of humanity, all the way from the birth of the universe to humanity’s discovery of God particles and interstellar travel. It’s fascinating how the game paints the main narrative alongside concepts like the Kardashev scale and the Big Crunch, but it really does work. No Man’s story can feel massive in scale, even if he’s just hunting for a way to save someone, and it’s easy to feel for his struggle.

There is one branch at the end, which poses a final choice to the player after a long journey with plenty of time for introspection and consideration. It was surprisingly difficult, given the circumstances, and it made me rethink a lot of what I’d seen up to that point. It’s a stunning finale that manages to tie together seemingly disparate points of human history into a surreal adventure of personal responsibility and maintaining hope in the face of an apathetic universe.

Well, there’s also the spectacular soundtrack. It leans heavy on the big band and jazz, but strays off into galactic synth territory in just the right places. The audio work is great as well, acting as the sound effects for the otherwise (mostly) unspoken dialogue. Sounds, gestures, and intonations do most of the work, and even little bits like the pop of bubbles as your protagonist drinks their drink, lulled into the sound of a beautiful singer on stage, work so well.

So what starts as a noir-infused story about a jilted saxophone player expands to much, much more, as your journey to find a way to stop this all from ever happening dives deep into cosmic territory. Descriptive text for evidence you’ve collected plays into the story, like a cigar that’s said to smell of extinguished ego; “It’s tightly wound and recently put out.” It’s little moments like these that drew me in and hooked me on the story, endearing me both to the shady conflict between these characters and the time-bending, galaxy-shifting efforts No Man was making to put a stop to them.

By zipping through the creation of life itself, you might just find answers to why someone has been shot and how to stop it. Though some puzzles and controls can get pretty frustrating, the adventure itself is the draw, and with Genesis Noir, it’s a beautiful trip through primordial creation worth taking. If you’re eager to see what kind of stylish, inventive ways developers are finding to tell stories in games, this hard-boiled trip is worth the ticket.