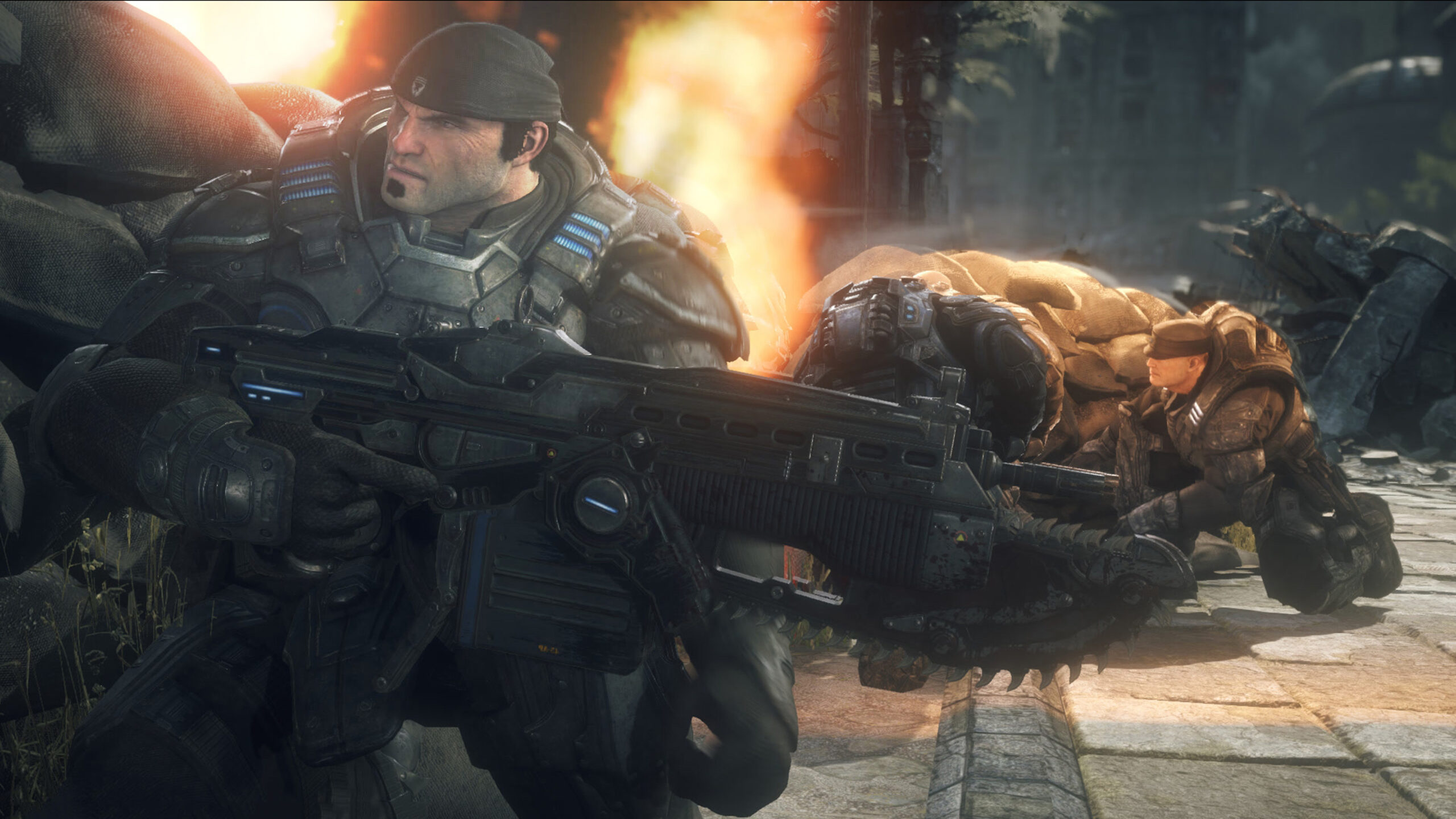 For better and for worse, Gears of War helped shape the past generation of gaming. Bursting onto the scene in 2006, it helped solidify now-common tropes like chest-high walls, brown and gray shooters, and muscle-bound space marines. It didn’t invent any of those, but it certainly helped elevate them to the level of Hollywood blockbuster everyone wanted to mimic.

Through that imitation, Gears of War‘s legacy has been diluted. A wealth of average games has caused people to proactively sneer at the disingenuity of this formula. It’s easy to forget that Gears of War not only blazed the trail, but it did so in a tremendous and highly entertaining fashion.

There’s something to be said for being able to revisit a title in 2015 that I originally played almost a decade prior, and still having a grand ol’ time with it. All it takes is a fresh coat of paint to remind us of Gears of War‘s brilliance.

The developers of Gears of War Ultimate Edition have called this “the first at its best.” Turns out they aren’t wrong, but they also aren’t quite precise enough. This is Gears of War — entire franchise included — at its best. Gameplay at a steady 60 frames-per-second does wonders for the naturally clunky movement. These soldiers now feel less like the tanks they resemble.

That’s not exactly the case in the campaign, however. Multiplayer over Xbox Live runs at 60FPS, but solo and cooperative play is locked in at 30. Regardless, it’s a vast improvement over previous installments. It’s immediately noticeable as soon as you pick the controller up. The Ultimate Edition is running on a mature version of Unreal Engine 3 — the same engine the original Gears of War was built upon — so this improvement can likely be chalked up to optimization and more powerful hardware in the Xbox One.

This newfound fluidity makes everything less frustrating. Cover-based shooting works as it always has, but moving from spot to spot isn’t as likely to end up with your character stuck to a wall you didn’t intend. Navigating the game’s many battlefields is quicker and more enjoyable.

While a slicker movement system is easy to appreciate, it’s the combat — the actual shooting of guns — that’s the real meat of Gears of War. Almost everything about it is perfectly intact. As many bullets as the enemies can soak up, there’s resounding satisfaction anytime an enemy gets tagged with a torque bow or a pistol takes a head clean off. Hip-shooting with the Gnasher is still a frustratingly inaccurate prospect, as it seems like things work out in your favor about half the time.

But, the greatest compliment you can give Gears of War (and it holds true in Ultimate Edition) is that it makes fighting fun. That shouldn’t necessarily be the case for a game that features pop-up shooting gallery one after another, but it is. Active reload is one of the better game mechanics of the past decade in that it constantly keeps the player’s attention during a process that they’d otherwise be uninvolved in. The Lancer (a/k/a “chainsaw gun”) is iconic and unironically cool.

It’s on the back of the combat that the rest of Gears of War gets by. A lot of the level design feels dated now. Settings are distinct through the game’s five acts, but they’re all used the exact same way. Rarely is there clever subversion to keep the player on their toes. More often than not, it’s predictable what lies just ahead.

To be fair, there are attempts to break this mold; the second act holds two examples. A large swath of this part of the game asks the player to pathfind by blowing up propane tanks in order to illuminate the road. When mixed with fighting, these are some of the best moments in Gears of War, as it adds a puzzle-like element. Conversely, the end of this act dedicates a chapter to vehicle driving. It’s poorly executed, and it comes off as a forced and transparent bid at shaking up monotony.

Gears of War can be linear to a fault, but that’s a trade-off for its cinematic nature. Chapter length is generally short, and a new cutscene is always just around the corner. Setpieces come about fairly frequently, but they’re somewhat subdued when compared to other installments in the series. Rather, this Gears of War is the game that set the tone for the over-the-top action to follow.

Despite all the cinematics, Gears of War is notably light on narrative. The story details the human struggle against the invading Locust on the planet of Sera. Things are bleak. Humanity has its back against the wall. Everything feels so down and out. This coalition of well-trained troops is the good guys’ last chance.

For those who actually care, Gears of War‘s plot can be effective yet simple. It lacks a lot of nuance, as does the dialogue. Most exchanges between characters are gruff one-liners, either overtly aggressive or sarcastic. To be blunt, the dialogue hasn’t aged well but this was never the game’s strong suit.

The greatest disconnect comes from the superb gameplay and the subpar narrative. It’s not only the disparity between the two that rings obvious, but also how they fail to work hand-in-hand. Gameplay often feels less like a means of accomplishing a story-specific goal, but more like a means to trigger a cutscene to advance the plot. Pacing is also an issue, as stakes are high and chaotic at all times.

There are plenty of faults, but Gears of War‘s greatest trick is that you don’t notice them while you’re playing. It’s just a good time from start to finish. On a personal note: my roommate and I played through the entirety of the campaign cooperatively on Insane difficulty in two sittings in one day. I couldn’t tell you the last time I dedicated that much of a day to a game. That speaks volumes.

For anyone looking to boil the Gears of War experience down to its purest and (arguably) most enjoyable form, competitive multiplayer again serves a big role. There are 19 maps and nine modes (including newcomers team deathmatch, king of the hill, and two-on-two with shotguns). It’s undeniably quite the large offering.

Again, Gears of War is fantastic when it’s just unadulterated combat. By today’s standards, eight-person multiplayer should seem tiny, but it really doesn’t. There’s always plenty of fray to be found. Maps are designed in a nice, symmetric way so that everything’s balanced. Although, the majority of weapons are immediately disregarded by most people in favor of constant use of the Gnasher, which feels like the way to go at almost all times.

Whether the campaign or multiplayer, Gears of War undoubtedly succeeds in constantly entertaining. The Ultimate Edition takes that to a new level through optimized gameplay, smoother controls, and updated visuals. Most importantly, it makes this classic relevant again.

Microsoft has a lot riding on the continued prosperity of Gears; after all, it is one of the publisher’s largest properties. Gears of War Ultimate Edition effectively reminds why that’s the case, just as it reminds why this is the game that partially influenced an entire generation of gaming. It just took a makeover to help us appreciate it again.

[Editor’s note: At time of writing, the multiplayer component wasn’t live for the general public. A handful of multiplayer games were played in a private room hosted by the developer. We’ll report on the state of online play at launch and thereafter. If this aspect of the game sees significant problems in the weeks following release, we’ll cover those issues.]