“RAAM’s Shadow”‘s greatest strength is its premise. A prequel set in the hours following Emergence Day, the first piece of campaign DLC for Gears of War 3 hints at what Ilima City looked like before it was destroyed, both by the Locust and the COG’s scorched-earth reaction. There’s a sense of melancholy that permeates the three-hour campaign as you run through a city you know will soon be ruined, accompanied by characters who will soon be dead.

There’s a certain elegance in the way the Gears series (and sci-fi in general) can extract so much meaning out of such broad strokes. Games like Gears of War work because the audience instinctively realizes that war is terrifying; “RAAM’s Shadow” works because it situates itself deftly into a world-mythology already primed for despair and hopelessness.

The problem for Gears, though, is the broader themes never get distilled into specific characters or narrative action. The soldiers of Zeta squad are rough-hewn archetypes, and their orders are simply to save any humans and kill any Locust they find. 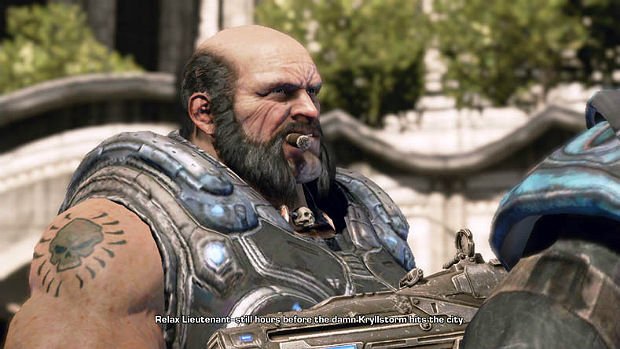 There’s a discernible rhythm to every level of design in the the Gears series. There’s the ebb and flow of intense firefighting and measured walking; the surprisingly steady tempo of shooting, taking cover, gaining ground, conceding ground, flanking, and armadillo-rolling-into-shotgunning; the delicate timing of the active reload system. High-level Gears play has a way of mesmerizing people with its locomotion.

Gears‘ distinctive fight-or-flight characterization fits into the later games, when the stakes and circumstances are clear, but it seems incongruous so early in the war. Michael Barrick — the bemutton-chopped protagonist of “Shadow” and Zeta Squad’s point man — lacks the necessary self-awareness to wonder what the Locust want, who they are, or where they came from. It’s not so much that Gears is violent; it’s that the series is violent a priori.

I’m not arguing that Gears of War should be re-imagined as a diplomacy simulator, but it’s discordant that Barrick never stops to wonder what the fuck is going on, a question that seems particularly salient when sub-human Morlocks start pouring out of holes in the ground for the first time.

The flipside is that “RAAM’s Shadow” speaks volumes through its setting and visual design. Ilima City starts off relatively intact, but as time goes on, after heavy Locust incursion and a few misplaced COG laser strikes, it starts to break down. The dead bodies start to pile up as the sky darkens, and if Michael Barrick seems mutely oblivious to the destruction around him, maybe it’s by design. 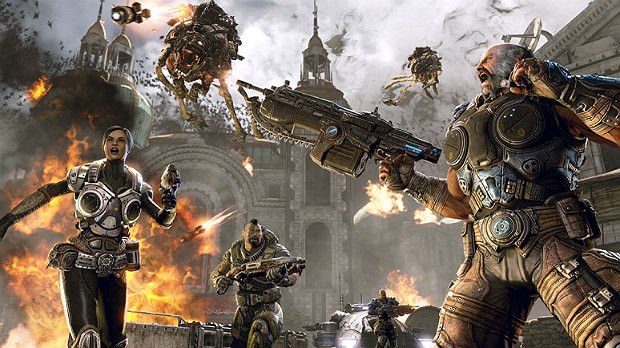 An extended, relatively non-violent horror section in the middle of “Shadow” harks to earlier games, calling up memories of the mission to the New Hope research facility from Gears 2. I can’t think of a single moment in 3 that was designed to be scary, and I had forgotten the role that suspense and atmosphere had played in the first two games. I’m glad to be reminded of it, because it’s in these moments, when Barrick has lowered his rifle and doesn’t have anything to kill, that he and the player both start to reflect on the situation: Barrick with crappy, jingoistic one-liners, and the player to himself, on his own.

I’m willing to believe that soldiers like Barrick have evolved past self-awareness, irony, or self-reflection: those traits might not be useful for survival in a hopeless, helpless war. I’m also willing to accept that Barrick’s machismo and chest-thumping are a protective armor in the face of trauma. This is a videogame, after all, and I’m willing to accept that — whether or not you agree that the characters in Gears are dumb and loud — the narrative onus is on me, the player, to see the costs of war for myself.

In that sense, I think “Shadow” fulfills its promise of showing players a starkly different, almost livable, version of the Sera we come to find in the original Gears of War. For those of us with the patience to invest in the surrounding lore, it’s nice to see where Jace Stratton comes from, or to notice that Anya Stroud hasn’t yet become the disembodied voice guiding us through the series. 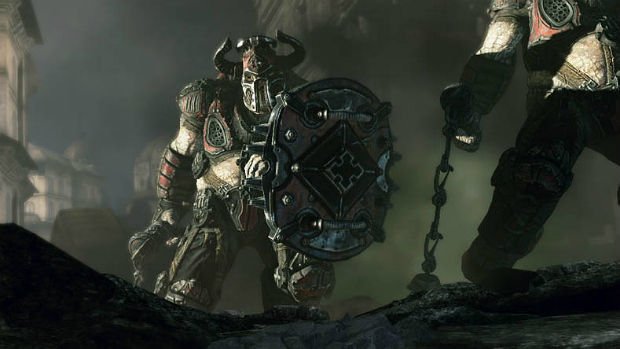 In almost all respects besides bodycount, the humans fare better than the Locust. Playing as the titular RAAM seems like it should be fun, but it’s not.

It isn’t that he’s overpowered, it’s that the RAAM sections are boring, repetitive, and break up the otherwise smooth pacing of the game. Each chapter in “Shadow” counts down toward the Locust “Kryllstorm,” when the sky is finally dark enough to unleash the ravenous kryll — the piranha-like bat creatures that live in the Hollow — upon Ilima. This dawn-to-dusk timeline gives the game it’s own internal structure and a sense of urgency, but the RAAM sections are more like interruptions than fun diversions.

Equally problematic, though, is that the writing team at Epic didn’t seize the opportunity to expand on RAAM’s character, his relationship to Queen Myrrah, or anything about the Locust at all. The Locust appear to all be totally identical and part of a rigid, Huxley-ian caste system of drones, Boomers, Theron, and Kantus. RAAM, however, is freakishly huge and, according to a few scraps of throwaway dialog, smart enough to coordinate complex tactics with Queen Myrrah. How did this happen?

Other nitpicks and inconsistencies abound, anachronistic pitfalls of setting “Shadow” as a prequel. It’s admittedly petty to harp on the question of “cannon,” but details are the lifeblood of fantasy genre writing. “RAAM’s Shadow” is relatively small and being sold to an audience that — as a rule — is already invested enough in the saga to notice that, for example, the iconic Gears Lancer shouldn’t technically exist at this point in the war — the COG should still be using Retro Lancers. 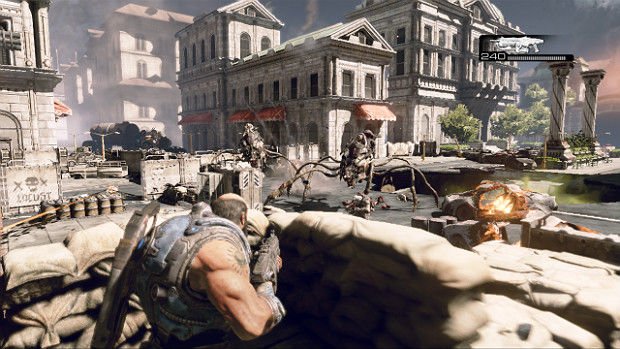 It’s more interesting to notice that “RAAM’s Shadow” feels and plays more like the first Gears of War than the third, visuals and engine aside. Gears 1 had a unity and cohesion of both level design and mission structure that, I think, went missing in 2 and 3 but returns in “Shadow,” perhaps because of the DLC’s urban landscape. While the level design of 3 feels busy and trench-like, most of the original Gears and “Shadow” feel more open, like an arena. It’s less about winning and maintaining ground than it is using cover to flank and maneuver, and the firefights never feel staid or stale.

The two final skirmishes in particular feel internally consistent and well-realized and are great examples of the dynamism possible within Gears’ ostensibly rigid and heavy framework. The most telling thing about the boss fights, though, is that they don’t feel particularly triumphant. Given that “RAAM’s Shadow” is simply the first salvo in a devastating war, it’s hard to feel too good about evacuating Ilima when it just ends up being swallowed by a giant worm a few years later in Gears of War 2.

Gears of War might be a power fantasy, but it’s tempered, more than any other game I’ve played, by it’s oppressive bleakness — each victory is small and pyrrhic.

There’s reason for hope, though: DLC like this continues to be a low-risk, high-reward laboratory for developers to expand their fictional universes and experiment with new concepts. “RAAM’s Shadow” isn’t perfect — the Locust sections in particular need work — but there’s no reason not to look forward to Epic’s willingness and ability to tinker with its formula and find new mechanics. It might take a while before we see anything truly innovative in post-release Gears of War DLC, but, in the meantime, I’ll be holding the line.