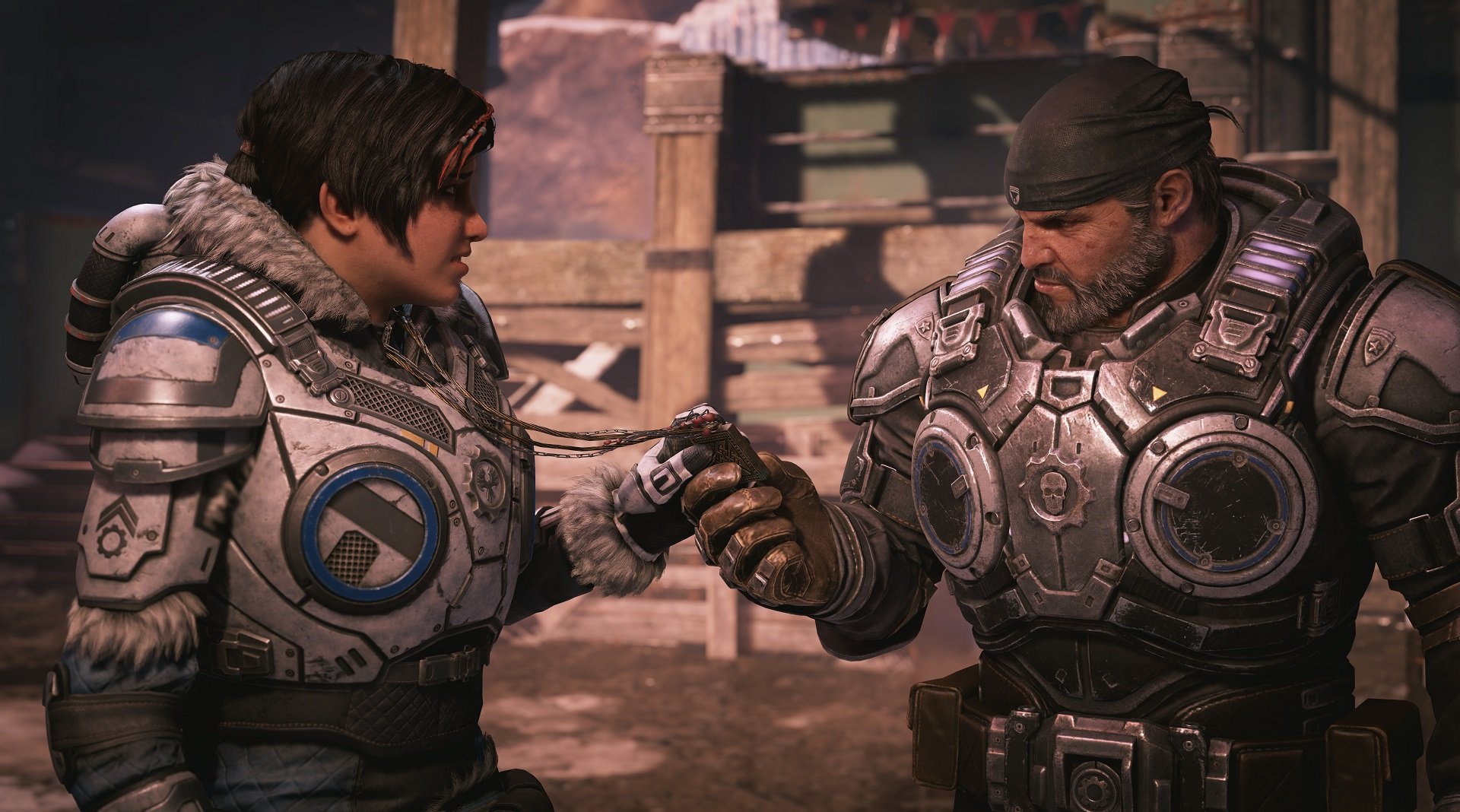 It was the best of Gears, it was the worst of Gears. It was an amplification of everything every Gears before did well, and it was a maturation of everything those same games struggled with. It was an identity crisis, a dysmorphic preoccupation with fixing shortcomings that weren’t actual shortcomings. It was bittersweet, but more sweet than bitter.

Gears 5 is the best Gears game to date, but just barely. In its second go-round, developer The Coalition shows a real proclivity for wringing every drop of tension out of a firefight and for constantly crafting larger-than-life sequences. However, as the new-guard stewards of Gears, the studio puts its mark on the series with game design that’s already dated. It’s not nearly enough to sink the whole effort, but it’s enough to anchor Gears 5 down.

Not surprisingly, Gears 5 picks up right where Gears of War 4 left off. There are macro- and micro-level stories being told. The large-scale conflict revolves around bringing the Hammer of Dawn network back online in order to protect the COG capital city from the Swarm; the more-personal narrative deals with protagonist Kait’s lineage and how she comes to terms with it. The former propels most of the gameplay, but the latter is undeniably more interesting.

Although Gears 5 employs the ghosts of its past (again) to make a splash, it’s Kait’s conflicts that lend the most emotional heft. Her moments of revelation, despair, determination, pain — it’s mostly all effective and nuanced, whereas past Gears titles’ handling of similar moments came off as hamfisted. Kait’s relationship with Del, who accompanies her for the entirety of the campaign, is natural and empathetic. He’s a great sidekick, and their camaraderie adds weight to an already-heavy choice that Gears 5 asks players to make.

Gears 5 navigates its narrative more elegantly than any previous game, and it imparts a very real sense that this is Gears growing up. The action is similarly elevated in a way that feels… bigger? Setpiece sequences pack explosive punches the way everyone has come to expect. Combat, however, ratchets up the pressure, always stretching shootouts slightly past the point of comfort. It’s intense. The Coalition has done a magnificent job designing weaponry, enemy patterns, and arenas that prevent the player from sticking to the same piece of cover until everything’s dead. A certain degree of mobility is necessary, and that makes it all the more dangerous.

But, the best complement to all the shooting is all the not-shooting. Gears 5 is confident enough to rely on long periods of quiet, asking its characters to take in the environment and the exposition. It’s some of the most fascinating moments Gears 5 has to offer — especially a mid-game robot-guided tour through a carnival of horrors — because it affords the opportunity to think and absorb. Then, when the bullets start flying again, it sounds that much louder because it’s contrasted against silence.

All of that is stitched together by Gears 5‘s most flagrant miss. The Coalition has introduced a pseudo-open-world component, as the middle acts are strung along by vehicle traversal that’s lifeless and unexciting. Piloting a skiff through huge and barren areas, it’s an uninspired way to make Gears feel less linear. It also brings the pacing to a screeching halt between chapters. As it’s implemented, this approach to an open world is a relic in 2019 — something that would’ve seemed novel many years ago but doesn’t hold up to present game design standards. It’s not all bad, though; at least it facilitates an impressive setpiece: a race against a train through a lightning storm.

Likely the biggest justification for the open-world system is that it’s in service of adding side missions. These are found in locations that are off the critical path, always signposted by a flag. Side missions are rudimentary and not very well-varied. They’re nothing more than quick combat sections, usually only a single wave of enemies. But, their rewards make life significantly easier.

Gears 5‘s other (and better) major addition concerns Jack, the do-it-all robot that supports Kait for the entirety of the campaign. The world is littered with resources to upgrade Jack’s capabilities, and the side missions unlock its ultimate abilities. In the early game, Jack seems superfluous — a decent companion but not a necessity. Later, Jack becomes more essential. Abilities like flash freezing enemies and deploying a giant barrier shield open up new combat opportunities rather than just cowering in cover until it’s time to strike.

The Gears 5 campaign is a tale of competing interests. When it’s comfortable enough to stick to Gears‘ roots, it does those things better than any game before it. The story and the action are unmatched (and I don’t think this is just recency bias kicking in), proving that The Coalition absolutely knows how to create a Gears game that can transcend anything in the original trilogy. But, when Gears 5 tries to forge its own identity, it’s a split decision. The Jack stuff can stay but the open world has to go.

However, Gears 5 is more than just a campaign. Three dedicated multiplayer modes capture the essence of Gears in different ways. The purest is probably Horde, the beloved cooperative wave-based onslaught that boils Gears down to its base experience. This iteration expands on classes, outfitting each player with a role to play within the team. Tanks draw fire, engineers build things, etc. A neat addition is Jack as a support class, a robot buzzing around and helping out where needed rather than the traditional Gears goal of just putting bullets in everything. It’s a Horde mode that emphasizes and requires strategy more than ever before.

Versus is still the competitive draw, pitting players against each other in five-on-five modes that have been a staple of the series. Team Deathmatch, King of the Hill, Guardian, and more — it’s all back, mostly untouched from previous iterations. The notable addition is Arcade mode, which leans more toward casual rather than super serious. It’s a team race to 50 kills, and each kill you personally rack up earns you a skull. These can be used to purchase new weapons: a few skulls for some sort of minor improvement, or a lot of skulls for the heavy artillery. Arcade is fine and it’s fun in short spurts, but it doesn’t have the appeal to lure the competitive players away from their wall-bouncing Gnasher battles.

Last (and least), there’s the brand new Escape mode. Escape drops three players in the center of a Locust hive, planting a bomb with the intention of blowing the whole thing up. The idea is to, you know, escape. A steady-moving wall of poisonous gas to their back forces players to keep running through rooms. If feels very antithetical to the Gears formula to dash past enemies without ensuring everything’s dead. Its urgency can be exhilarating, though. Escape subverts what Gears should be, and that’s interesting. But, of all the modes, it’s the most fleeting. It doesn’t have the depth that established modes have. That means most players will just find it a pleasant distraction, not their go-to game.

The Coalition has achieved a lot with Gears 5. The writing and action often rivals the best moments in the series, even surpassing its predecessors at times. The overall package is the most robust Gears has ever seen. But, the big structural alteration feels like an unequivocal misstep. Gears 5 is a rousing success, but it could’ve done without the needless change.