The studio’s roots show when playing this twin-stick co-op shooter, which attempts to provide a fresh take on the classic shooter format seen in many XBLA hits like Assault Heroes. And it does so successfully, for the most part. 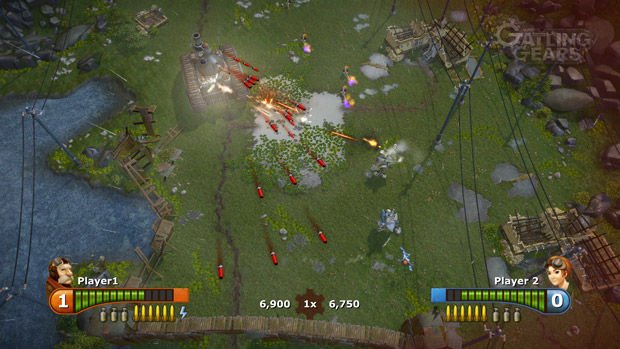 Set in the steampunk world of Mistbound, the same one featured in Greed Corp, Gatling Gears certainly has a level of graphical fidelity going for it. But while the environments look good, stomping around in a moderately sized metal walker machine of death is arguably more charming.

Being a walker, the controls are as you would expect them to be. You’re not a car or a helicopter, so you don’t “float” onwards if you stop moving. But you can’t exactly make pixel-accurate steps either; you are a giant walker, after all.

In typical twin-stick shooter fashion, you move around with the left stick and shoot your standard gatling gun with the right stick. It’s worth pointing out that this gatling gun has a limited range, even at maximum strength. To counter the range issue, cannon shells can be fired in straight directions with the right trigger and bumper, and a powerful grenade has to be aimed at a spot using the left trigger and bumper.

The cannon shells and grenades slowly reload over time, so there is little reason to save them up. Once you aim and lob a grenade, the game also remembers that location so you can quickly lob more grenades in that spot without having to aim all over again. Which is useful, as aiming can take a few seconds and leaves you vulnerable. 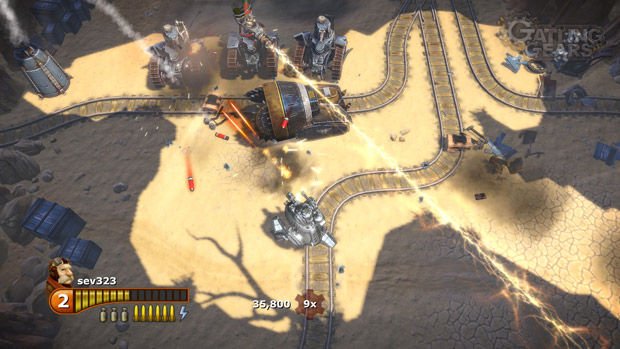 A single-use super attack destroys everything on the screen, but you get bonus points at the end of every stage for not having used one. Even more bonus points are awarded for not dying, and the points dictate both the type of medal you are awarded as well as experience points.

It’s this XP that determines your position on the Xbox Live friends leaderboards, and it also unlocks skins, some minor walker effects you don’t really notice, and a pet that sometimes distracts more than it serves as a cute little thing. Still, it’s adorable to have a wolf or spotted panther running around you.

The real star of the game — beside the fine shooting mechanics and the gratifying explosions of things that need to explode — are the titular gears. Every time you kill or destroy enemies and mines, they will leave gears for you to collect. Collecting six gears will net you a multiplier that only goes down every time you get hit.

The gears don’t force you to collect them all (but you will), just like the multiplier system doesn’t force you to never get hit (but you will try not to). It’s a smart system that doesn’t obstruct casual players while offering incentive and a slightly different gameplay approach to core players. Without collecting gears, you can quite simply forget about getting high scores or unlocking some of the high-end aesthetical upgrades to your walker. 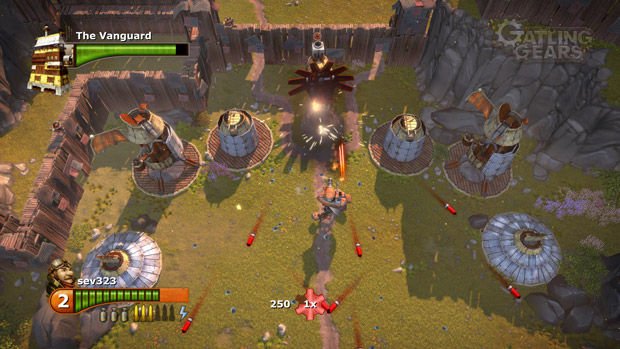 Plowing through the game’s six chapters — each divided into five sections — is a lot of fun. Enemies will mostly shoot straight rockets in your direction, which takes some dextrous evasion on your side if they attack from multiple directions. Some enemies will shoot homing missiles which, while slow, will never stop following you around.

There’s a flimsy story about an industrialist Empire that does some evil stuff, but it’s more of a backdrop element that pushes you forward than one that is ever fleshed out. There are hints and act of opposition to the Empire’s evilness, but it’s never actually explained properly nor does the game give you any big reason to care about it. And that’s fine, because it’s a twin-stick shooter.

But it’s also one that, while it will last you 5+ hours easily, does get a bit repetitive if you play it for long stretches. Gatling Gears‘ final chapter ramps up the difficulty immensely, but most chapters won’t confound the typical twin-stick enthusiast. Once you get the hang of which enemies are the most dangerous to your multiplier and which enemies you can save for a mop-up swipe, it becomes a bit of a familiar affair by the time you reach the later chapters.

The camera will at times move too slowly or make a collectable for upgrades impossible to reach as it moves past it. It’s an annoyance you’ll stop caring about once you pass the first chapter, but it tends to pop up here and there. Some players might also take issue with the range of the default gun, which you should upgrade as fast as possible. Later levels feature flamethrower infantry with a pretty long range and without a good gatling gun you’re going to hate yourself, or more likely hate the game for it. 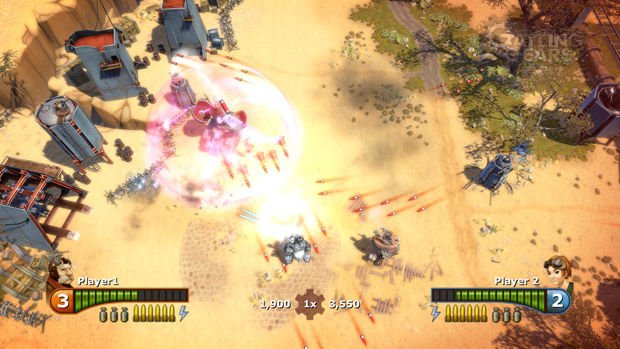 The chapters themselves do offer plenty of stylistic variety, whereas the enemies offer less variety in terms of challenge. You will encounter new enemies on your journey to the Empire’s heart, including decently difficult bosses at the end of every chapter, but the majority of all combat revolves around evading incoming rockets and annoying flamethrower infantry that quickly becomes the bane of your multiplier-increasing prowess.

Still, there is enough diversity to entice you to keep playing. In a throwback to Greed Corp, parts of the scenery will also fall into the misty abyss of the world as it is literally torn asunder by the Empire’s war machine. Three difficulty settings, online and local co-op, and three survival maps that pit you against waves of enemies and objectives to protect, all serve to add longevity to what is already a highly enjoyable top-down shooter.

The survival maps in particular are very challenging and best played with a co-op buddy. As a full package, there is no real shortage of content here. A good thing, too, because at 1200 points it’s still well above the impulse buy range for most gamers — even if that may be the standard price for XBLA titles these days. 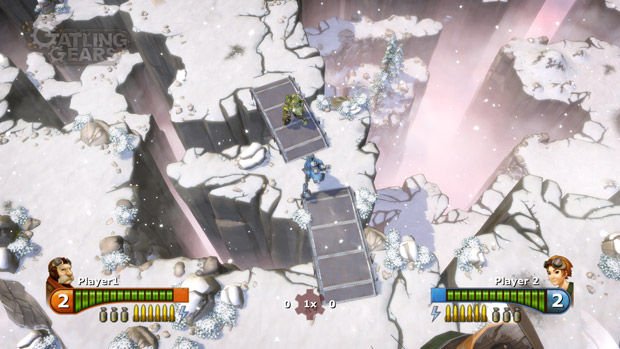 Whether or not it is worth that price for you simply depends on how much you like twin-stick shooters and if you have a potential co-op partner to enjoy the game with. After playing through the game once and finishing all of the survival maps, you can take your fully upgraded walker into a higher difficulty if you please. Or try to increase your scores in any of the game’s levels. And if you tend to not do that in these types of games, you will still get an above-average amount of playtime from it.

It’s also not like there are that many great twin-stick shooters on XBLA, either. Sure, there are plenty to choose from. But many are like Aqua: perfectly okay and fun games that you will play through once and never again. While imperfect, Gatling Gears sits comfortably at the upper range of twin-stick shooter quality on the consoles’ digital platforms of today.