Young girl, you’re out of your mind

I never thought I’d be the type of person who’d enjoy a game where you pump high school girls full of pheromones to satisfy their needs, but here I am reviewing my third Gal*Gun title. Despite clearly not being in its target demographic, I’ve always enjoyed the absurdity of it all. It’s nice to have something downright outlandish to revel in while the rest of the industry pushes toward that homogenized center.

Of course, that absurdity and outlandishness come at a price, and the Gal*Gun franchise has always been in the middle of one controversy or another. Gal*Gun Returns is no different as a few weeks ago, we learned the Xbox One port of the title had been canceled after some “productive discussions” with Microsoft.

Having seen what this series can do, the move didn’t surprise me. But now that I’ve played it, the cancellation seems even more ridiculous as this is easily the tamest entry in the franchise. 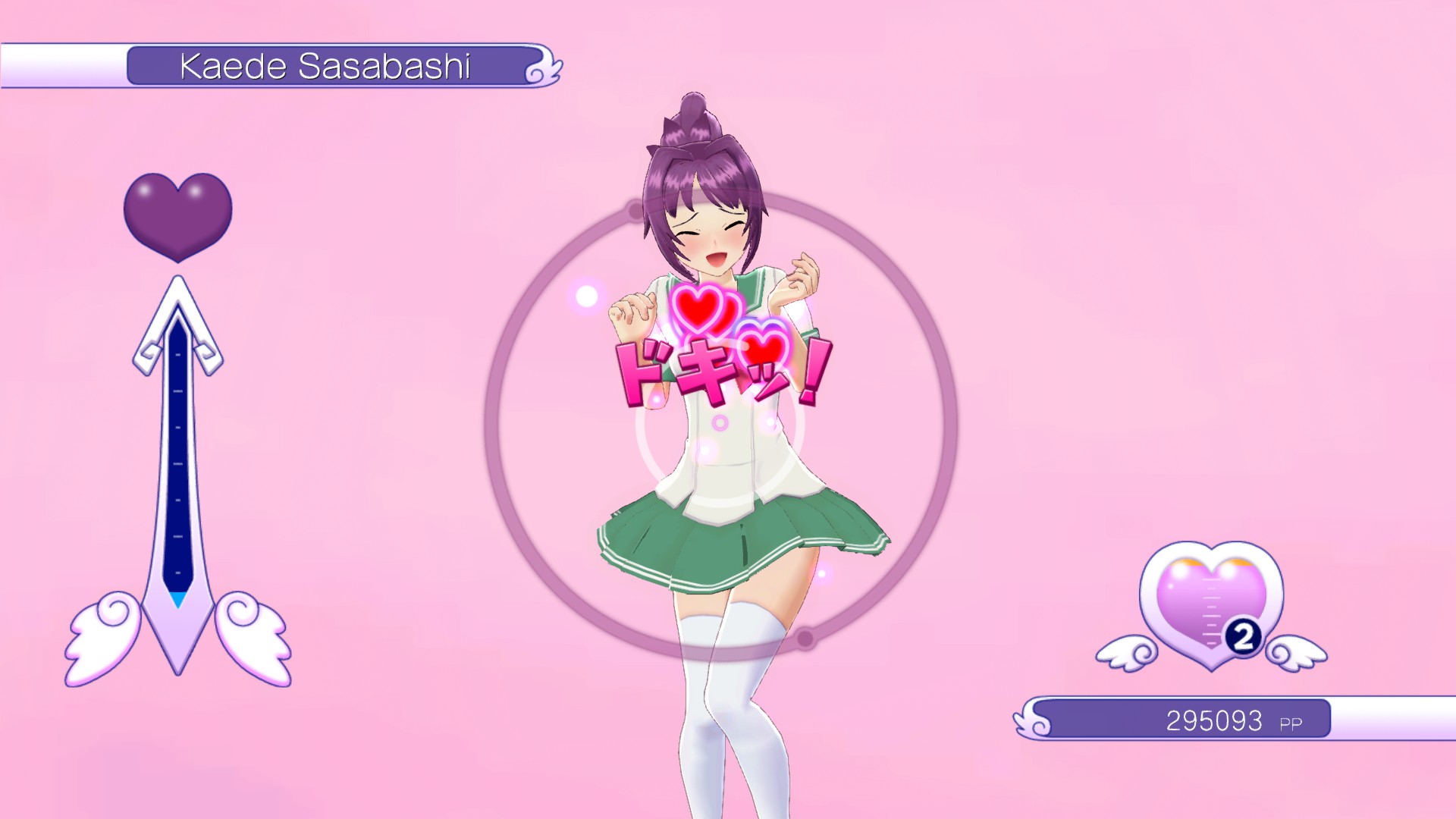 Gal*Gun Returns takes players back to where it all started 10 years ago. Apprentice cupid angel Patako is nearing her graduation, and her last task to shoot a student with a Pheromone Shot. Unfortunately, her equipment goes haywire and unloads a bevy of arrows into the back of Tenzou Montesugi, an unpopular student who’s about to be the hottest kid in school. Because of how many times he was shot, Tenzou has until the end of the day to profess his love to the girl of his dreams or risk being alone forever.

It’s a premise later games in the Gal*Gun series have tweaked upon, but in Returns, the set-up is at its most basic. There are no branching paths here. You simply pick the girl you want to pursue from the start and get going after her.

Standing between you and a happily ever after are throngs of students and few faculty members you need to satiate with those Pheromone Shots. As you move through the school, girls will ambush you unless you can pump them full of enough mojo to satisfy their needs. If there are too many girls to handle, activate Doki Doki mode, and you’ll get a chance to give one of the girls some personal euphoria. If you manage to hit all the right spots within the time limit, pleasing her will satisfy the rest of the girls on screen.

While Gal*Gun Returns is technically a rail shooter, it’s a very primitive take on the genre, and in practice, it’s closer to a simple shooting gallery than anything else. That’s not a bad thing as it’s quite a decent shooting gallery game. My favorite shooting bits happen when you and your chosen waifu have a one-on-one moment with its own unique set of rules. Shoot the sheep, pick the lyrics, defeat the tentacle monster; I only wish Returns featured more moments like this as the main narrative is a bit too limited and repetitive. You’ll see some locations multiple times running through the story mode with each girl.

In fact, most of this game is pretty basic compared to what’s come after it. It’s not nearly as scandalous as Double Peace or Gal*Gun 2 as it lacks some of the features that made those games as naughty as they are. You can’t vacuum the clothes off the girls, Doki Doki mode is very hands-off, and while the game boasts 423 different pairs of panties, they can be difficult to see without heading into some of the other modes or changing up the girls’ costumes. This definitely feels like Inti Creates putting its toe in the water to see what it could get away with rather than diving straight in.

As is the case with all the Gal*Gun titles, the girls in Returns look fantastic. The character models here are very bright and distinct, and while they may be wearing the same uniforms, I got to know most of them through my repeated playthroughs and return trips to Doki Doki mode. The school itself looks noticeably better than it did back on the Xbox 360, even if the art direction is rather sterile. Most of the school is barren, empty, and lacking in vivid colors or lighting.

While it isn’t the best looking Gal*Gun title on Switch, it runs well enough with no noticeable drops in the framerate, smooth reticule movement, and a control scheme that makes sense for the type of simple rail shooter it is. There are, however, far too many loading screens to sit through. It would have been nice if more of the Switch’s features were worked into this remaster. There are no gyroscopic controls, no touch controls in handheld mode, and, most bizarrely, Gal*Gun Returns manages to screw up one of the main selling points of the Switch. 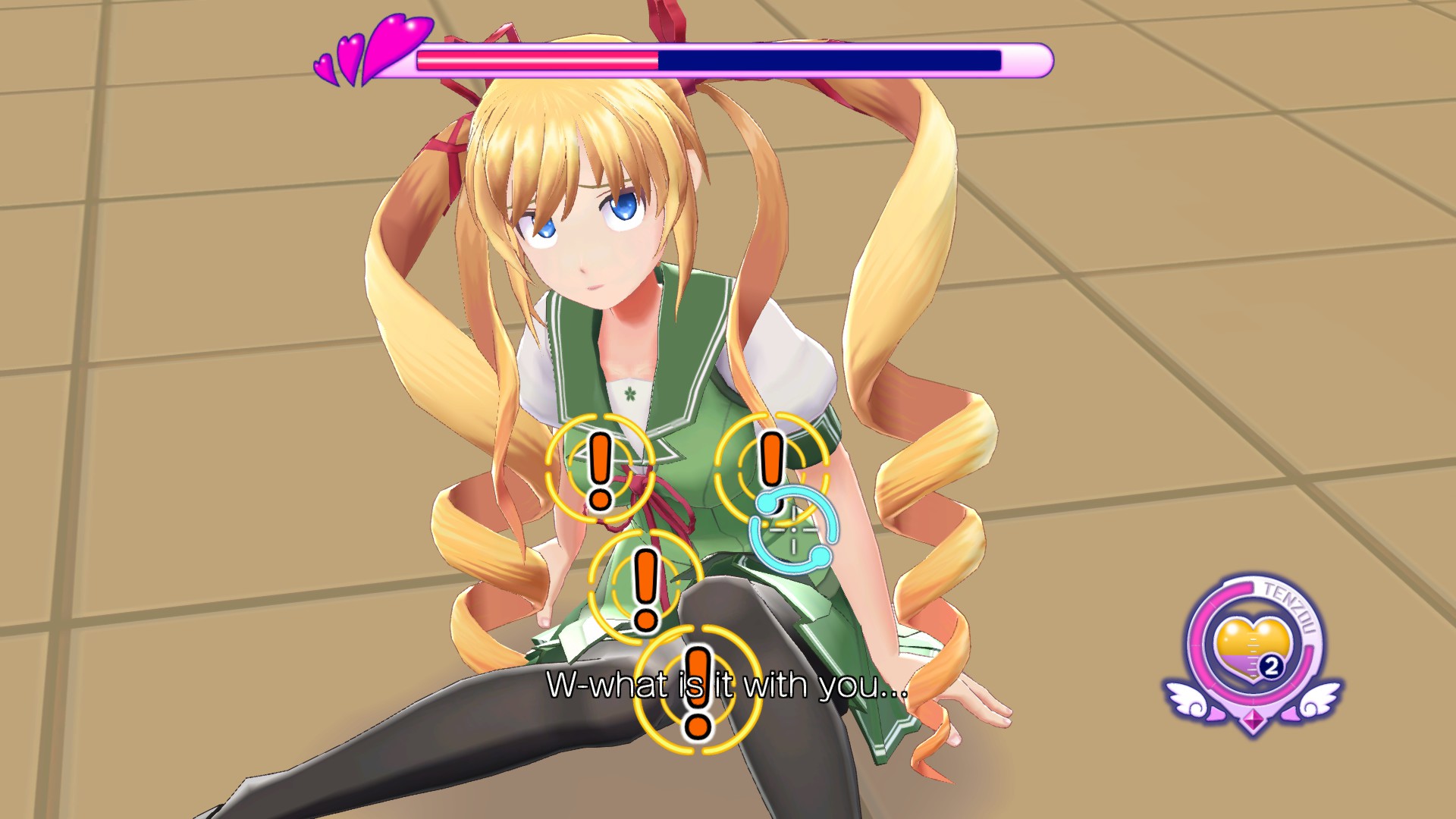 When playing on my television with my Pro Controller, I took my console out of its dock to play in handheld mode while I made dinner. Unfortunately, after I picked it up, none of the controls worked. Couldn’t shoot, couldn’t exit back to the title screen, couldn’t work the menu. The only thing I could do is hit the home button to exit out of the game and manually remove my Pro Controller so I could actually play in handheld mode. It’s a strange oversight on the developer’s part and something I hope they fix in an update.

If you find the experience to be to your liking, there is quite a bit of content to dive into. Gal*Gun Returns has a ridiculous number of portraits to unlock, a fantasize mode where you can fight the controls to get the girls into the right position you want so you can “observe” them, and a post-story campaign called Doki Doki Carnival that’s mildly amusing and only moderately entertaining. You get all that, plus most of the DLC that was released for the original game and new story elements that flesh out the narrative.

Gal*Gun Returns is a pretty decent remaster of a so-so game barring a few issues. I don’t think anybody is going to walk away from it arguing it’s the best in the series, but it’s worthwhile for fans who’ve wanted to see where this franchise got its start. And if you’re anything like me, it’ll make you appreciate what’s come after it all the more.