It happened several weeks ago on its Twitter feed
Did PQube Games pose a question for its followers to read.
With Gal*Gun 2 a month away the publisher wanted to know
If you’re a fan who’s brave enough to play the game on the go.
Would you play it on a plane?
Would you play it on a train?
Would you play it with the volume up in a crowd like you got no shame?
Happy to say I’m the type of guy who doesn’t give a shit.
No matter what kind of game it is I’m playing it on my Switch.
So I did play it on a plane,
And I did play it on a train,
And if I could then yes I would play it in Spain with David Wain.
For all its pert, there’s something you should know about this game,
Despite the naughty bits it shows, Gal*Gun 2 is rather tame. 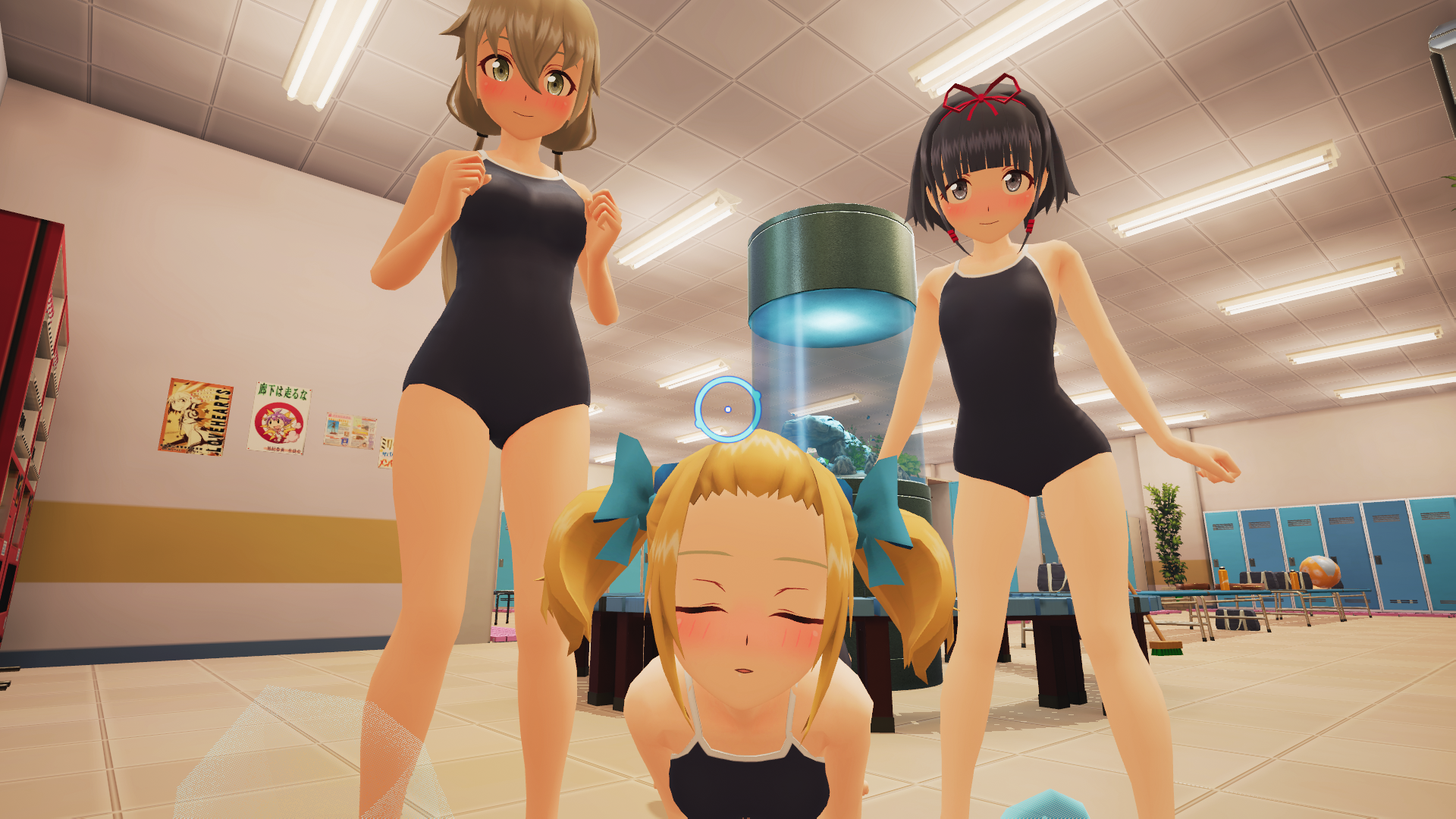 Gal*Gun 2, which is actually the fourth game in the series and the third to make it out of Japan, is using its first appearance on a Nintendo console to mix up the concept behind its on-rails sexual student shooter. No longer am I the victim of a boneheaded Ekoro and her wayward arrows. Now, I’m a recruit of the Angel Ring Company, armed with the classic Pheromone Shot, the Demon Sweeper from Gal*Gun VR, and a pair of goggles that will help me see the demons festering inside this clean, somehow-all-girl-except-for-me school campus.

By my side is Risu, a bumbling failure of a paper-pusher for the Company who needs my help to make her demon squashing quota. We’re given less than a month to make her goal, but I meet it in approximately seven in-game days. After that, I’m mostly meandering through the story as I try and grow closer to the two humans in my life: Nanako, my childhood BFF, and Chiru, the shut-in who lives next door.

Interactions with both girls boil down to me giving them snacks until they like me enough to advance their story. Nanako and Chiru have very different paths in life, and I’m there to pretty much perv it all up. My character is unapologetically seedy at times, but hey, the ladies seem to like it. As do the classmates I can call upon for some naughty-time “rendezvous” I gain access to by completing requests.

I can only complete two requests a day, so hitting Risu’s quota before time’s up means balancing story missions with side-quests featuring my potential boos and returning characters, or answering the call of a girl in need in exchange for her phone number. These requests/missions fall into one of a few categories. There are the standard shooting levels, which again have me pleasuring lovestruck girls with little bursts from my love gun and freeing students possessed by little demons. There are guard missions, which place me in a single area where I have to protect a girl or group of girls as they’re attacked by demons of different difficulties and sizes. Finally, search missions task me with locating a certain number of objects before time runs out. At first, I despise the latter of these tasks, but when I finally figure out to use all the controls at my disposal, I come to appreciate them for their abundant replay value.

There’s variety here, which is something I can’t say about its predecessor, Gal*Gun: Double Peace. There’s also a reliably steady framerate on the Switch, which the last game on the Vita lacked. It’s basically the exact same school as every other outing in the series, but cleaner and more polished, making better use of the Unreal 4 engine. There are also motion controls this time, but they’re not as accurate as I’d like. The cursor can drift, and the game doesn’t register slight movements all that well, so I find it best to pump these girls full of my love juice using a mix of motion and analog controls.

When comparing Double Peace on the Vita to 2 on the Switch, this hands-down plays better than the last game. And going with a more open, mission-based progression system is a move I appreciate even if the payoff isn’t as astounding as it could be. It’s a step forward for the series, but the content that actually matters, the aspects of the game synonymous with the term “Gal*Gun,” takes a step back. 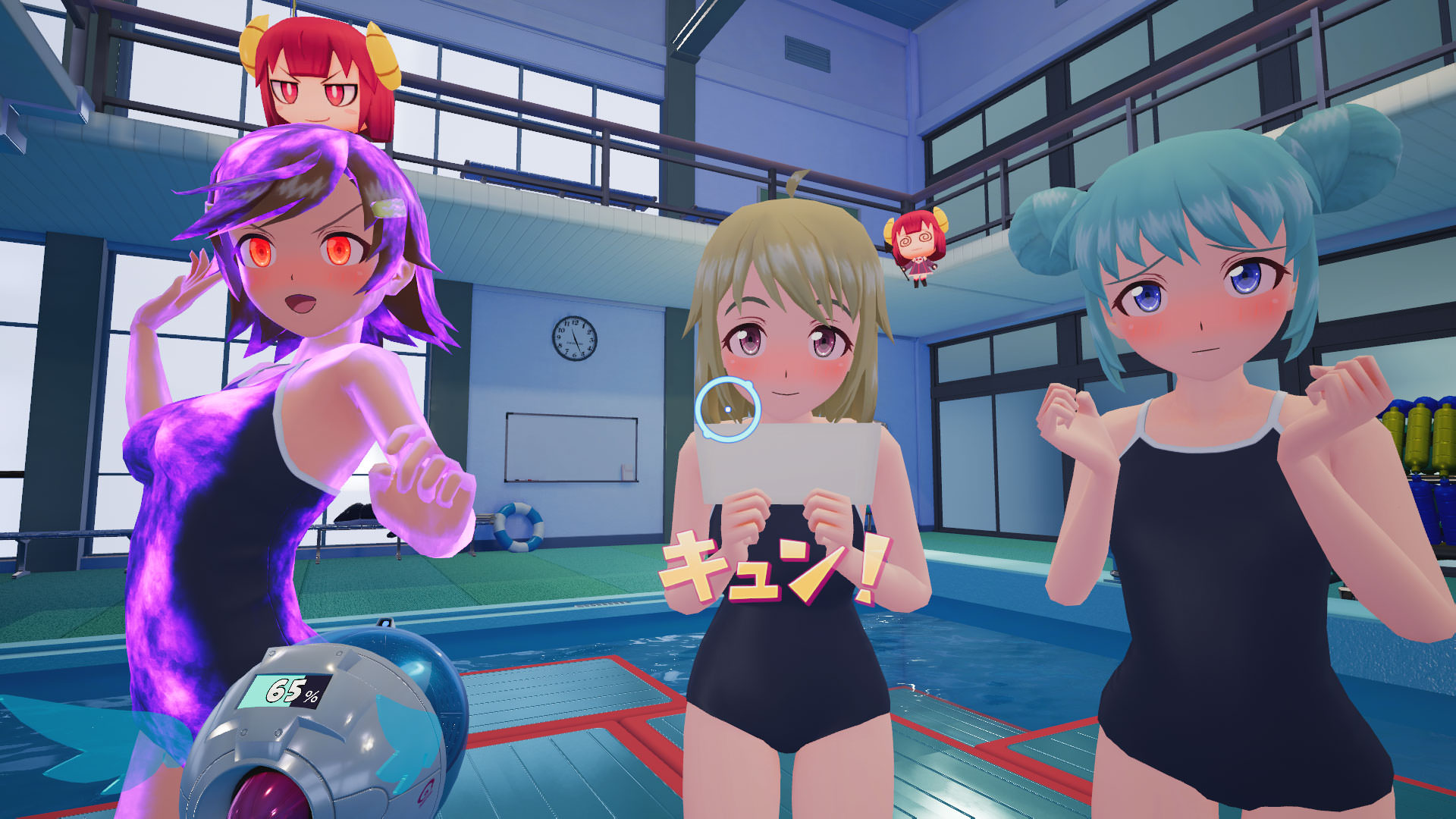 Gal*Gun: Double Peace succeeded largely because it was unapologetic in what it was. It was sexy. It was silly. It was about as Japanese — or at least what we in the West perceive Japanese to be — as gaming gets. At a time when people across the internet were asking for better representation of women in media, it was a reminder that it’s okay to just think girls are sexy. That’s why I like that game. That’s why it’s still on my Vita despite my limited storage space. The way it presented itself with gusto is why it got a fan base large enough in the West to warrant a sequel, and yet so much what made that game wonderful feels sterilized in Gal*Gun 2.

I’ll say it: this game isn’t perverted enough. I didn’t put 40 hours into Double Peace because it was an on-rails roller-coaster ride of spellbinding set pieces. I did it because the game is a perfect combination of unbridled sexiness and an appropriate amount of sleaze. Yes, I can use Demon Sweeper to literally suck the clothes off of girls, and that’s neat, but it’s boorish compared to the subtle creepy voyeurism of zooming in on a girl and having her clothes become lightly translucent, giving you a peek at the underwear underneath. That’s out in Gal*Gun 2, as are touch controls.

Doki-Doki Mode in Double Peace on the Vita was a scandalous delight because I could literally use my fingers to pleasure up to three girls until they were absolutely soaked in euphoria. Not here. Gal*Gun 2 neuters Doki-Doki. It’s just one girl at a time and isn’t a weapon I can use when I’m overwhelmed by a horde of horny hotties. Instead, it’s its own mission or one of the activities I can perform with a girl I’m having a “rendezvous” with. Without touch controls on the Switch, it’s a sanitized, off-hands experience. I just use the Pheromone Shot to cast demons out of a girl, popping her clothes off if I’m successful enough. I get that doesn’t sound too bad and can actually be kind of fun, but it pales in comparison to how I used my digits to really give it to the girls in the last game.

The changes made to the fundamental facets of the Gal*Gun experience are regressive. Like if Midway Games put blood in the first Mortal Kombat, then decided for MKII that SNES sweat was the way to go. Is Mortal Kombat without blood still the same experience? Technically yes, but in reality, no because wanton gore is sewn into the fabric of that franchise in the same way sexy shenanigans are sewn into this one.

Nothing in Gal*Gun 2 tries to go beyond what the series has done before. Many parts don’t even keep on par. Changing the structure of the campaign helps pad the play time, and it’s still a silly, relaxing, and quirky experience with bizarre elements that are beyond explanation — hit the minus button to see what I’m talking about. But it’s all just so gentrified and clean cut. If Gal*Gun: Double Peace was Times Square before Giuliani with all the porn stores, go-go bars, and occasional double homicide, Gal*Gun 2 is Times Square after Giuliani where the most immoral thing you’ll see is the lingerie section at Forever 21.