Stop all the downloadin’

When “movable fighting man” G.I. Joe first made his way to British shores in the 1960s, he was renamed as the less nation-specific “Action Man.” Despite this amusingly bland new moniker, Action Man was still a smash success with British kids, going on to sell thousands of dolls, (“It’s an action figure, mum!”), in the ensuing decades.

The plastic military man and his kung-fu grip became so huge here in Britain, that when the super-popular G.I. Joe: A Real American Hero animated series made the leap overseas, it also needed to be renamed, to keep marketing in line with the toy range. So do you know what we got? Action Force. ACTION FORCE. The Brits are nothing if not great at poorly localizing American properties. That and making abysmal political decisions.

Nice history lesson, Moyse, but what does this have to do with G.I. Joe: Operation Blackout, GameMill Entertainment’s new video game adaptation of the aforementioned Saturday morning show? Honestly, not all that much. But what’s important is that now you know, and knowing is half the battle. 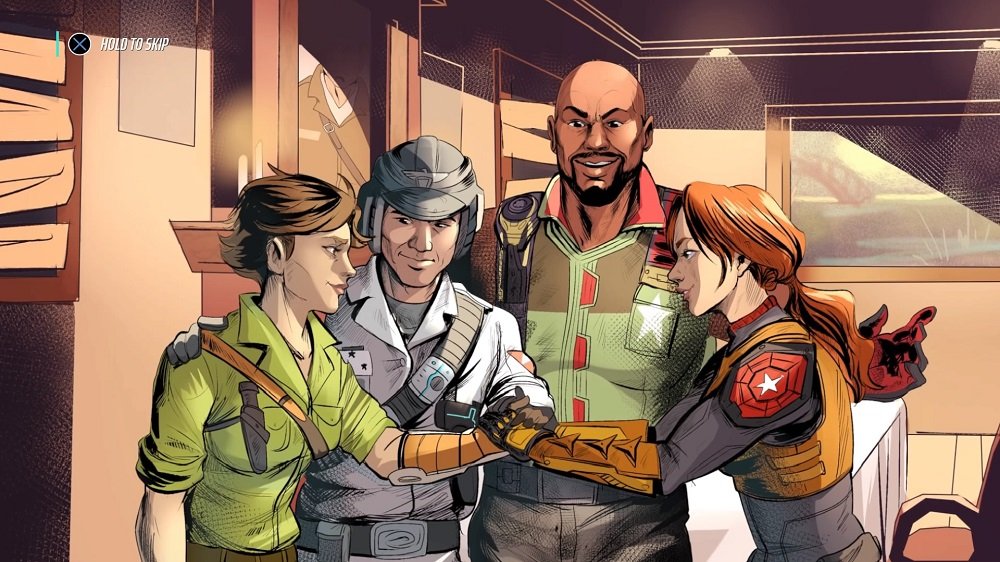 G.I. Joe: Operation Blackout is a joint-production of Chilean developer Iguanabee and Costa Rican studio Fair Play Labs. A third-person action-adventure with hero shooter elements, Operation Blackout is the first licensed G.I. Joe title since 2009 movie tie-in G.I. Joe: The Rise of Cobra, and chooses to set itself within the universe of the hit 1980s animated series, rather than the recent live-action movies.

Operation Blackout consists of two distinct modes: a roughly six-hour story campaign and local co-op/Vs. play. The story campaign puts players in the gung-ho boots of both members of the G.I. Joe squad, as well as their villainous rivals COBRA. (Shout it. Always shout it.). In a storyline surprisingly similar to Marvel’s Avengers, a violent attack on the G.I. Joe headquarters results in the scattering and disbanding of the Real American Heroes, which leads to the vile Starscream Cobra Commander becoming President of the United States – I mean, at this point, I’ll take it.

Scattered across the globe, it is up to the player to reunite the members of G.I. Joe, before launching a series of covert missions to free the United States from COBRA’s tyranny. As a plotline, it’s straight out of the TV show, delightfully over-the-top and filled with amusing and welcome holes and contrivances. The story is told through some nicely styled comic-book art, which makes up for the static nature of the cinematics. If there’s one thing Operation Blackout does very well, it captures the feel, atmosphere, and awesomely Hoo-Rah spirit of the G.I Joe universe.

Unfortunately, this heartfelt adherence to the source material doesn’t automatically translate to a wildly enjoyable gaming experience. Operation Blackout is a third-person shooter in the most basic of senses. It has a cover-based style and a pace akin to Gears of War, but has neither the technical prowess nor budget to pull off the same gripping, hi-octane gameplay. As such, Operation Blackout feels dated, and mostly consists of fighting off waves of identikit enemies in slews of “Hold this position for two minutes” set-pieces. In its favor, each character has a selection of unique weaponry, as well as a custom special ability, which at least makes the roster feel varied. But on the whole, the gameplay is reminiscent of third-person shooters from the early PS3 era, and isn’t particularly thrilling.

Not helping matters is a sluggish control system, which on consoles makes the run ‘n’ gun action a chore. There’s a selection of auto-aim and sensitivity options available, but after working with a wide variety of setups, I never found a “sweet spot” that made control feel slick and tight, everything would just go from one extreme to the other. I can imagine that the PC edition will fare much better, as I expect Operation Blackout is far more playable with a mouse and keyboard setup. But wrestling with an unruly crosshair while blasting away at the same army of enemies saps the wholesome fun out of everything. 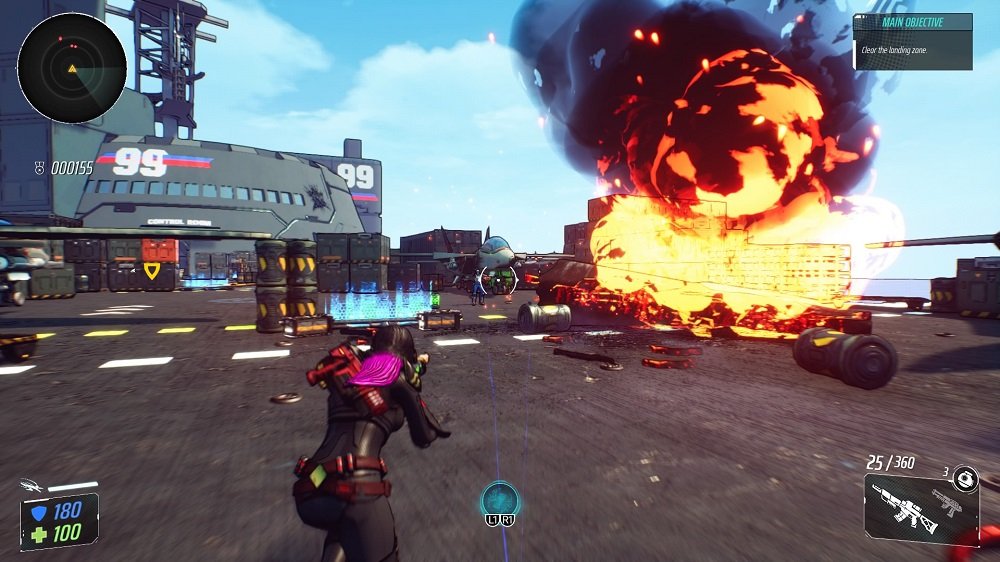 Operation Blackout features some really nice, cartoonish visuals, as well as some impressively done special effects, with the battlefield awash with colorful explosions and projectiles. The game’s visual style is lively and warm, with chunky character models that are reminiscent of golden-era action figures. Constant radio chatter between characters also keeps the missions feeling “alive,” which is necessary given the generally simplistic objectives. An occasional vehicular section will show up to add some variety to the action, but these mobile moments are half-baked and uninspired.

As a nice touch, players can not only unlock multiple skins for each character, referencing iconic moments from the show, but they can also unlock play modifiers, as well as a museum of classic comic art of Cobra Commander, Destro, Duke, Roadblock, The Baroness, and their comrades-in-arms.

The multiplayer mode supports four American Heroes, who can choose their favorite characters for skirmish battles in modes such as Capture the Flag, King of the Hill, and Deathmatch. But unfortunately, Operation Blackout has no online play, and thus supports local co-op/Vs. only. This is fine if you have a group of friends who want to come round and dive into the action with you, but with so many great local multiplayer titles on offer, I’m not sure where Operation Blackout would sit on your party playlist. Still, the co-op option at least provides a bit of shared entertainment for the story campaign. 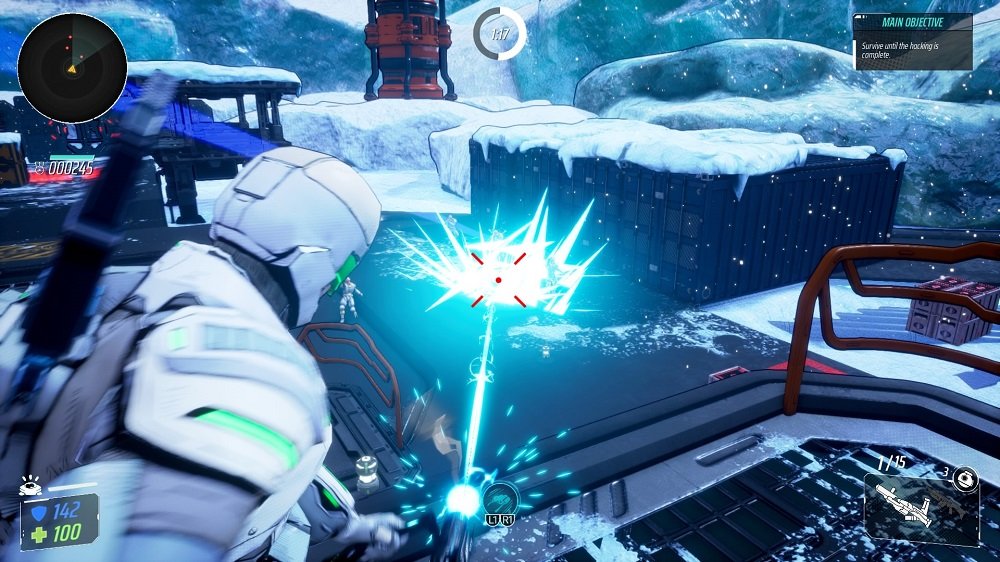 As a reviewer, it’s advisable to refrain from writing that any product is “for the fans,” as it’s a self-explanatory and relatively obvious statement to make. But in the case of G.I. Joe: Operation Blackout, I can’t think of another title I’ve played in recent times that would only really appeal to the most die-hard of followers. If you love G.I. Joe, you’ll get a kick out of the characters, collectibles, retro visuals, and Saturday morning storyline, but even the most hardened devotee will find it difficult to deny that Operation Blackout has dated gameplay, dull missions, and a slim package, even at its discounted price.

Operation Blackout is not a terrible title, it just has very little new or engaging to offer an audience in 2020.  If you’re still interested in checking it out, then I’d suggest grabbing it down the line, perhaps on the PC, which I’m guessing will offer a tighter and more optimized control scheme. Oh, be sure to bring a buddy along for the ride.

There’s a nugget of an excellent game located within G.I. Joe: Operation Blackout, but this outmoded third-person shooter unfortunately doesn’t have the resources, scope, or variety to expand upon its unmistakable potential. With repetitive objectives, frustrating controls, and a lack of online multiplayer, G.I. Joe: Operation Blackout isn’t fun enough to stand out in a crowded shooter marketplace, despite the obvious and heartfelt passion on display for the ’80s franchise.