Anybody who has even glanced at From Dust can tell you that it is unique. Describing it in simple terms is quite difficult indeed, which is strangely ironic, for the game is, itself, deceptively simple.

From Dust defies genre by dipping its toe in the waters of strategy and God simulation without committing to either, but under the inscrutability of its definition, there lies a game that really isn’t very hard to grasp at all. 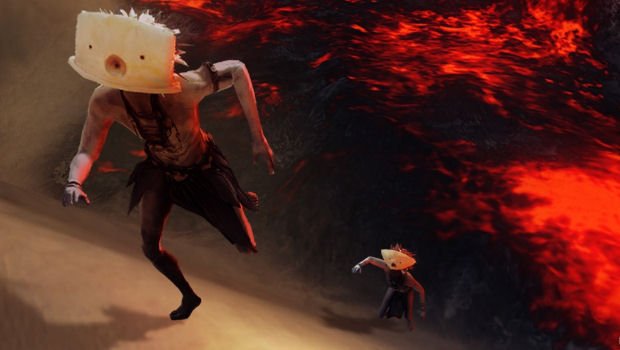 From Dust puts players in control of The Breath, a magical force that can shape the land by gathering elements from one place and shifting them to another. Your job is the guide a tribe known only as the “Men” — mysterious dark skinned people who wear wooden masks — to a variety of Totem poles so that they can build villages and populate the land with vegetation. Once all the villages have been built, you can guide your Men to the next stage.

Of course, it’s not quite that easy. In what could be described as a cross between Sim City and Lemmings, you must shape the land to allow your Men to reach the Totems safely. To do this, you move the cursor over any element that can be interacted with — in this case, earth, water and lava — and hold a shoulder button to essentially “suck” up a certain amount of it. Once you have control of a given mass, you can place it anywhere you like.

A simple objective would be, say, grabbing some earth and placing it over a stream to build a safe bridge, or dropping some water over a forest fire. Each material behaves in its own unique way — earth can grow vegetation and build bridges, but it’s easily eroded when faced with too much water. Water is required to bring plant life to deserts and can put out fires, but Men can’t fight strong currents and their villages will crumble if flooded. Meanwhile, lava will harden and form unbreakable rock walls when dropped, but its flow is hard to control and it can wreak havoc on any village it comes near. 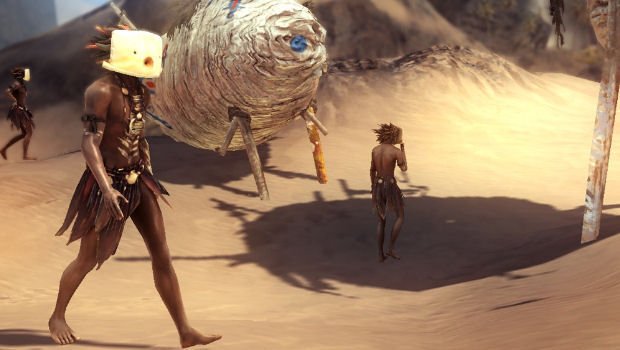 Added to the mix are various trees with their own unique properties — fire trees intermittently radiate flame, water trees gorge on water and release it near heat sources, and exploding trees do the obvious when fire is present. Each of these trees can be very dangerous, but are crucial when used in the right context.

Finally, there are a number of passive and active powers that are earned by building villages and finding special stones. Active abilities include the power to put out all fires on the map or evaporate water, gather more material at once, or turn water to jelly so that it may be carved through. The passive abilities are found in stones that Men must be sent to. Once they have a power, they will travel to each village and share their knowledge. These passive abilities protect villages from water and lava, so that even a tsunami will pass harmlessly around it. It’s quite an impressive sight.

Now, this is fascinating stuff, but there’s a catch — From Dust, for all its territorial manipulation and breathtaking scenery, is inherently boring. The trouble with having one really great idea is that if you rely on it too much, you drain all the magic out of it before too long. The power to reshape the earth and redirect the flow of water is truly inspired, but it is just one idea, and it’s repeated over and over again, and in practice, it’s not all that exciting. No matter how many unique and clever scenarios the game creates, it all amounts to the same humdrum activity — slowly sucking up resources from one place and dumping them somewhere else, over and over again. 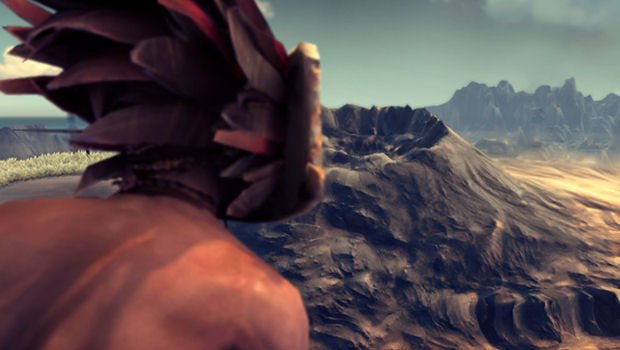 Earlier, I compared From Dust to both Sim City and Lemmings, and that’s true in spirit. However, From Dust features a mere fraction of the interactivity and potential of either game. The player’s only real input is in moving bits of a level and telling Men which stone or totem to activate. The rest of the time, you’re just watching your Men potter about doing nothing much or anything at all, or unhurriedly traversing the map en route to a destination. It gets insufferably tedious after a while, and the inability to control, communicate with, or do anything of interest with the Men is quite disappointing.

This inability to do much beyond your one ability is compounded by the unpredictable nature of the Men. In one level, I had to get a Man to a water-repelling stone before a flood would render the area inaccessible. Each time I clicked on the stone, a Man would be sent from a village that inhabited a far-flung corner of the map, rather than the one that was almost directly next to it. It took several attempts — and quite a while of waiting for floods to pass — before the game randomly decided to send a Man from the nearest village.

At other times, Men will ignore a path you’ve painstakingly built for them, choosing instead an impossible route over a river or chasm that requires you to drop your plan and rebuild. Sometimes they’ll get stuck over the slightest crack in the ground, or for no discernible reason at all. At other moments, I had whole villages screaming as if they were drowning or burning, but when I checked on them, everything was fine. This game puts you in charge of the very earth itself, yet robs you of the small, more important, interactions. If ever a game could make one feel like a God bound in chains, then From Dust is it.

An overwhelming feeling of disconnection prevails throughout. Although you can zoom in on one Man and watch him walk around, you never really get close to the action while playing. The two gameplay perspectives are either zoomed out or really zoomed out, with your Men little more than worthless specs for the vast majority of the game. The screenshots are almost always deceptive — you never feel that close to the action or to the characters, and as such, it’s difficult to get personally invested. 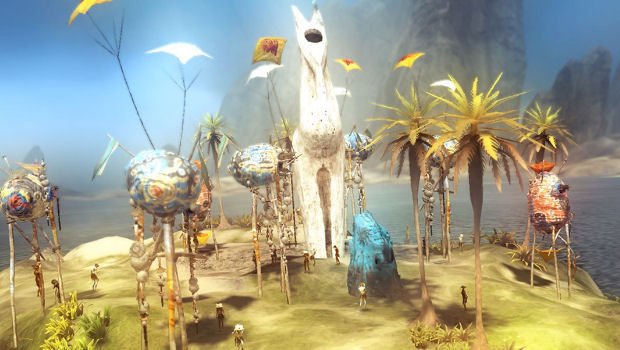 There is no consistent “fun” factor, as it straddles the line carelessly between crushingly slow and frantically stressful. If it’s not making you pick up and drop lava repeatedly to build a wall, it’s tossing multiple forest fires at you without warning. The game loves to throw delicate balancing acts at the player, but that’s really the only challenge it could ever hope to accomplish. I don’t know if it’s possible to make the game interesting without these moments of ludicrous stress, due to the limitations imposed on the player and the sheer lack of appreciable content.

There are many missed opportunities in From Dust‘s quest for simplicity. Plant life grows and it attracts animals, but to what end? No end. Villages are built, Men multiply, but they don’t really do anything. You are supposed to care about these people with no reason given to do so. They exist merely as tools — unreliable ones at that — in order to progress from level to level. For a game that tries to be evocative and beautiful, From Dust is a surprisingly soulless affair.

I do not mean to take anything away from what the game accomplishes. It is most certainly a beautiful looking title, and the physics at play are fascinating. Watching the way earth, water and lava behave can become quite engrossing, and one cannot help but admire the work that went into making each element work in its own unique way. If only there was more to do, see and experience, it could truly be an outstanding title. 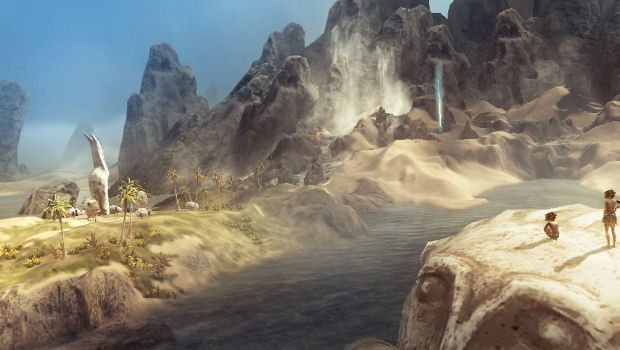 There are a selection of challenge modes, which provide slightly different methods of gameplay, but they still revolve around this one estranged mechanic. After glimpsing a few of them, I decided they weren’t really worth my time as they only dally with the idea of uniqueness. Players can also unlock various “story” fragments to learn more about the game’s world, history and inhabitants. Again, though, this game is so uninviting in many ways that it’s difficult to become invested in the universe.

From Dust has a level of charm to it, that cannot be denied. It’s different, it’s impressively designed, and a player could become addicted simply to watching magma roll down a hill. When the time comes to make an actual videogame of these gorgeous physics and unique ideas, however, From Dust falters with a considerable measure of inelegance.

There’s just not enough content and too many restrictions for the game to be truly engaging. It keeps the player at arm’s length, removes any motivation for feeling responsible and, at its very worst, annoys with persistent feelings of helplessness and characters who couldn’t tell their arses from their elbows. The power to shape mountains and carve waterways would make for a wonderful gimmick in a more fleshed out game, but as a central concept it’s just not strong enough to build an entire experience around.

All that said, in the “moving bits of dirt from one location to another” genre, From Dust is thoroughly uncontested.