Probably the most colons I’ve ever put in a headline

Frog Fractions has finally made its way to Steam after all these years, by way of its Game of the Decade Edition, and it’s wonderful that it’ll now live on past the imminent retirement of Flash support across web browsers. One thing that might have slipped by some of you, however, is that there’s a new DLC for the game called Hop’s Iconic Hat.

If you’re already a fan of the original, I’d recommend going in completely blind for this new bit of DLC. I’ll even go so far as to say I had a good time with it, in case you aren’t sure about taking the plunge and just want a brief opinion. Everything I write after this paragraph will contain some mild spoilers. It’s pretty much unavoidable when attempting to write about it, so consider yourself warned. 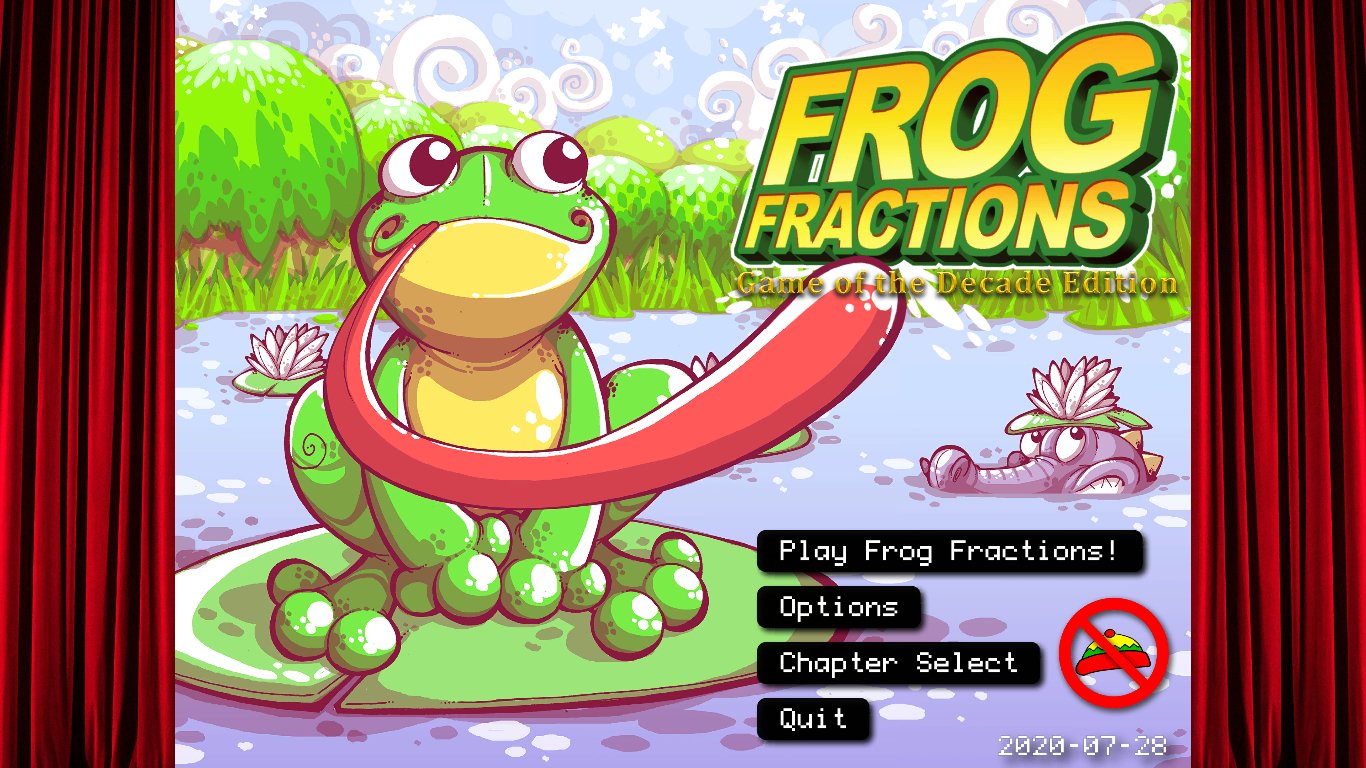 To anyone who has been following the news on Frog Fractions’ Steam release, you’d be more than forgiven for wondering why the DLC for an old Flash game is going to set you back $9.99. There’s a very simple answer: this unassuming “hat DLC” is, in fact, a brand new Frog Fractions game. I don’t know if this is technically Frog Fractions 3, Half-Life 3, or if it’s just considered its own separate thing where numbers are mostly meaningless, but none of that really matters anyway. The important thing is that it’s fun.

It’s hardly surprising that the developer, who released the highly anticipated Frog Fractions 2 unannounced and buried inside of a resource management sim called Glittermitten Grove, would stealth drop the next entry in the franchise as a microtransaction for the original’s Steam debut, but I still let out an audible “hell yeah” when I first figured out what was going on. To the uninitiated, that last sentence probably reads like total word vomit, but I can assure you, against all odds, it’s an entirely coherent statement. You’re just going to have to trust me on this. 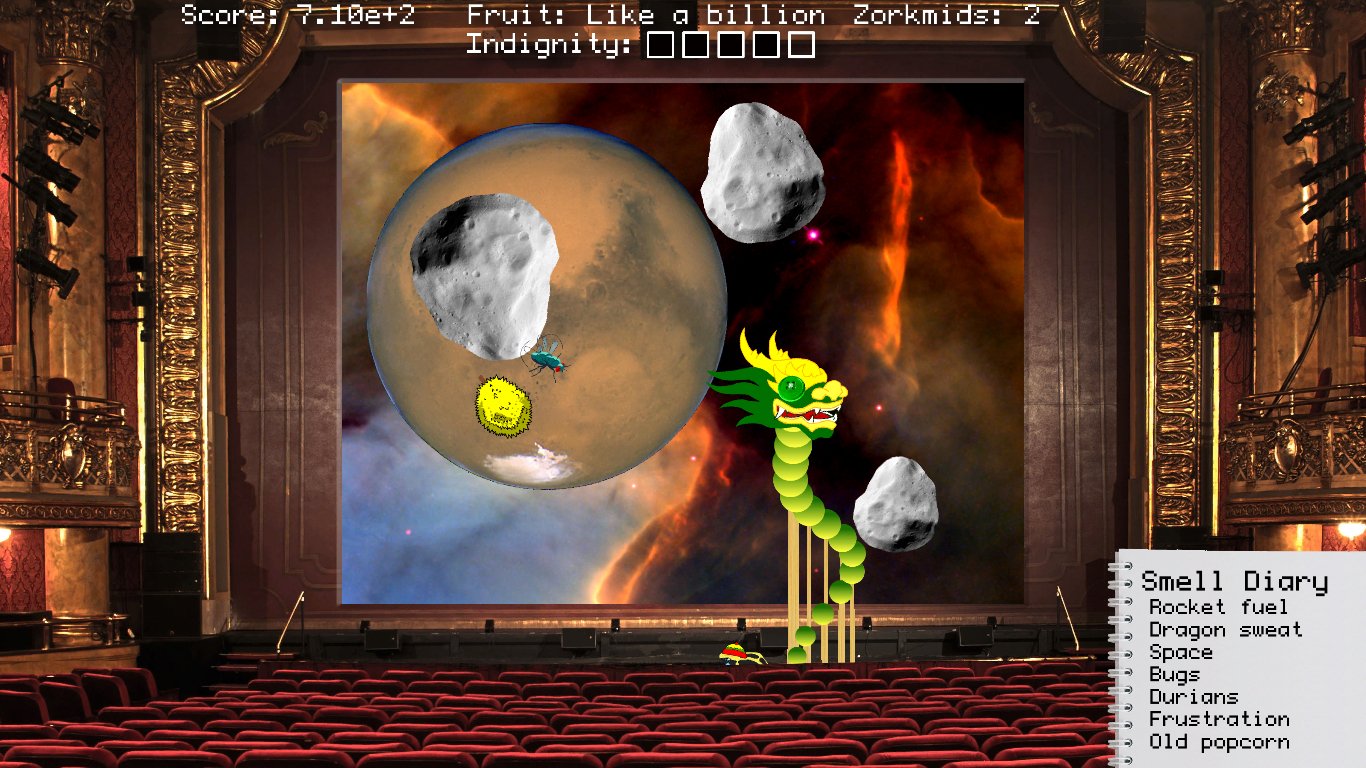 When you open the menu, you’ll need to click the hat icon on the right side of the screen and then click “Play Wearing A Hat!” At first, during my initial playthrough, it appeared that nothing had really changed at all from the base game outside of the protagonist wearing some goofy new headgear. However, once I obtained the warp drive — where the original adventure really starts — it quickly became apparent that this was an entirely new journey.

I’m not going to go too far into story beats, because experiencing it for yourself is half the fun, but Hop’s Iconic Hat takes place well after the events of the first game. Hop is older, with a wife and kid, and he can’t quite help but reminisce about his glory days. The whole thing is very much a reflection on and response to everything that transpired previously, and it seems plainly clear that some of it is taken directly from the perspective of the creator and their own experiences too.

Don’t worry, this isn’t some sober reflection on the mortality of man or any drivel like that. It’s still very much a Frog Fractions game and everything quickly turns into the comfortable, psychedelic fever dream that we all know and love. There’s just a touch more nuance this time around though. It’s extremely subtle, but it’s there. As a nice change of pace, we actually get to know the characters somewhat. It’s hardly groundbreaking, but what’s here serves the story well. 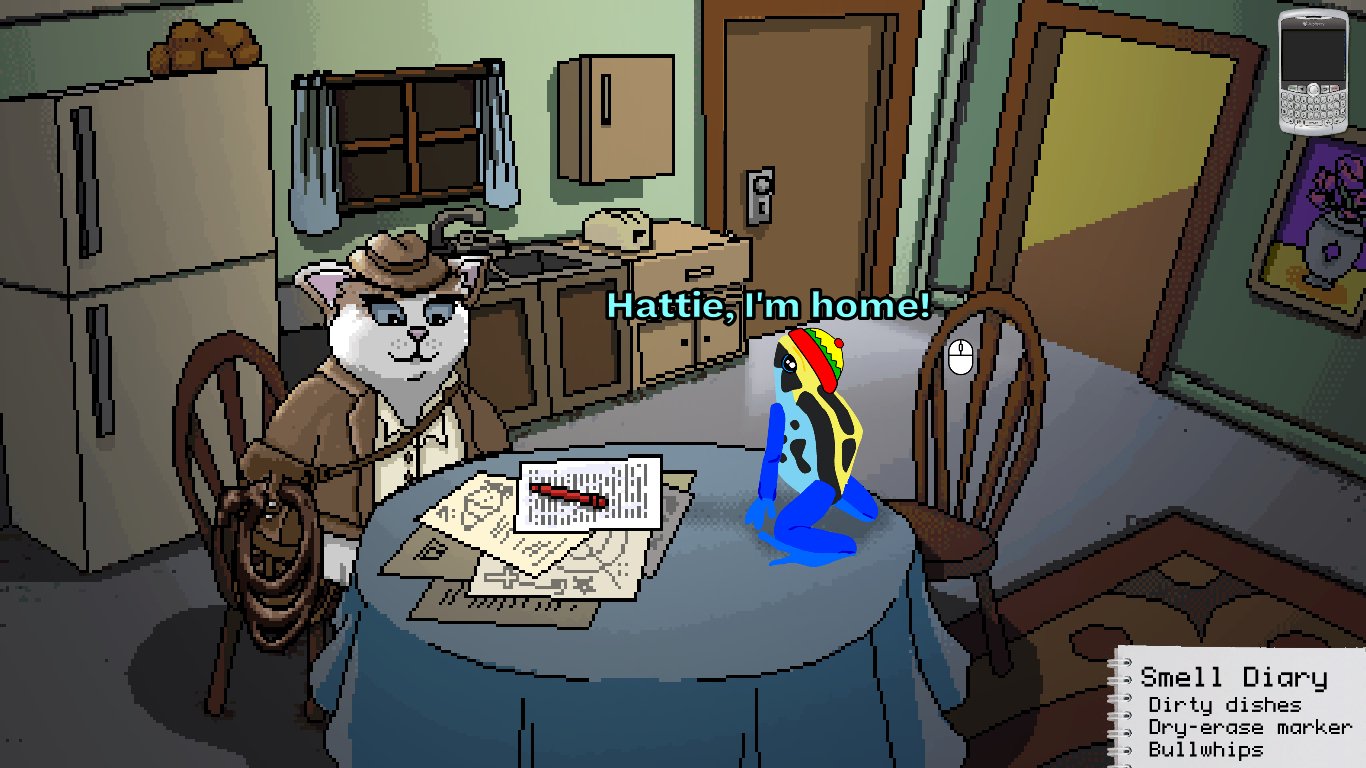 The first game moved at such a ridiculously fast pace that there wasn’t any time to even start to think about what sort of person Hop, the titular frog, was. To be honest, we may never really know. He’s clearly changed a ton over the years. A lot of time has passed since that initial journey, and the majority of what we see now revolves around him trying to convince his kid that he’s awesome and has done a ton of rad things throughout his life. The results are somewhat mixed, but still pretty dang endearing.

If you’re familiar with the franchise, you likely have a solid idea of what to expect from the gameplay. It’s basically a collection of disparate, simple mini-games that work to push you out of your comfort zone while moving the plot forwards. Frog Factions carries a bit of jank at times, but it gets the job done. The soundtrack, on the other hand, is legitimately phenomenal, and I can easily see myself blasting this stuff somewhat regularly. It’s goofy, it’s fun, and it all fits remarkably well with each scene.

Over the course of its roughly three-hour runtime, I laughed and smiled a bunch. That’s more than enough for me. This could have easily ended up as an embarrassing attempt to relive and milk the franchises’ past success, but it turned out to be something much more enjoyable. It’s not the flashbang of passion and possibility that the original offered, because few things in this world are, but it feels like it has something unique to say, and I think most fans will walk away happy if they take the time to listen.