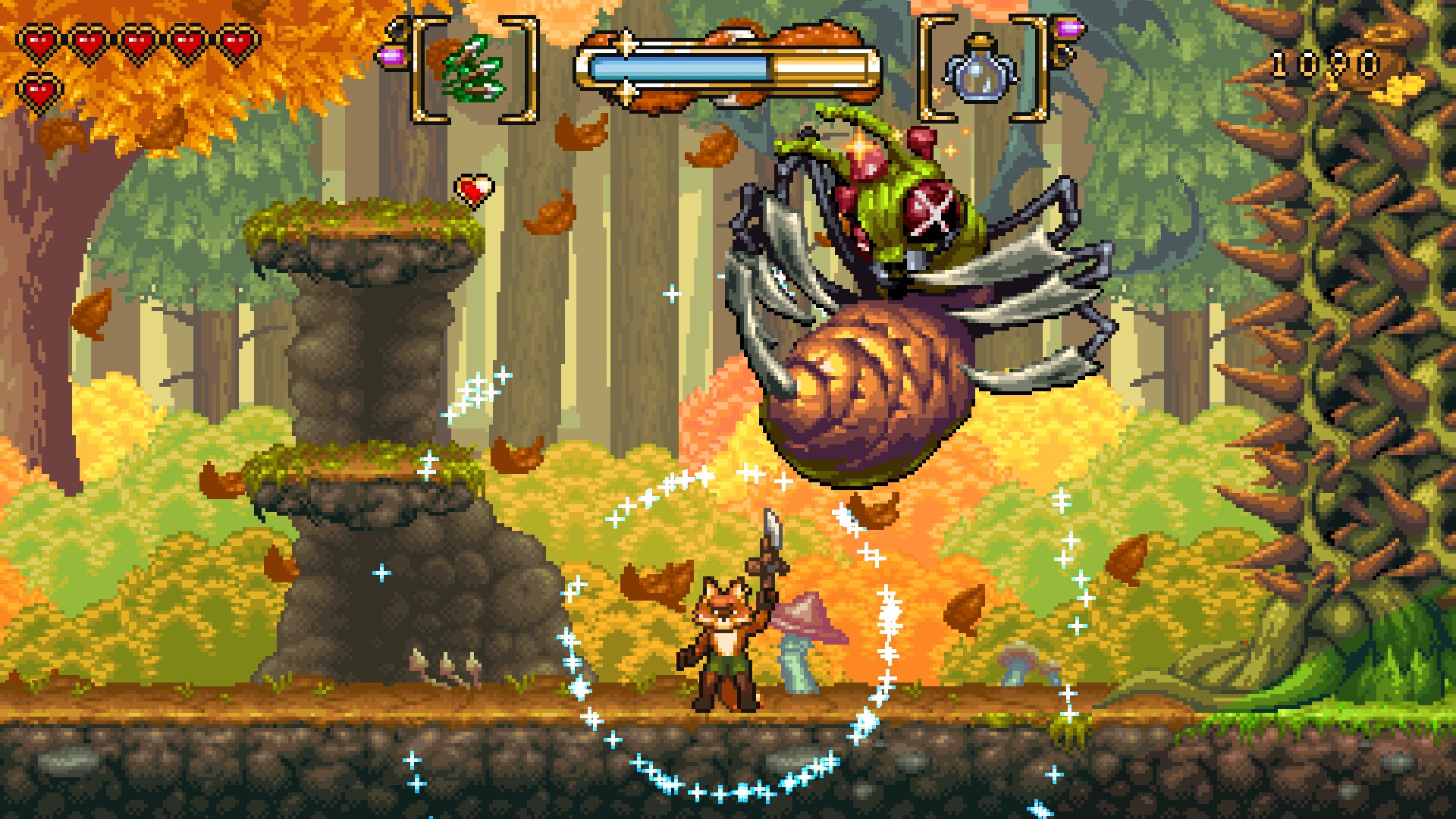 It seems like every other day a new indie title gets announced that boasts a retro, pixel-art aesthetic. Many claim to be taking us back to the ‘90s and our childhood, but often fail to recreate what made those classics so good. Enter Bonus Level Entertainment and its debut title, Fox n Forests. The game is a 16-bit inspired, RPG-lite romp with shades of Zelda and Castlevania sprinkled throughout.

It may not always live up to its inspirations, but if you had told me this was a lost SNES title, I would believe you.

The game starts very much like Yoshi’s Island with a pseudo-storybook cutscene that quickly lays out the plot at hand. You’ll control a fox named Rick who, after failing to sneak up on his prey, teams up with a partridge named Patty to help her save the forest. Apparently the wise old season tree has had pieces of bark stolen and that has thrown the forest into disarray. After explaining this, the tree grants you the ability to control the seasons and sends you off to regain his lost bark.

While obviously setting up the motivation for this adventure, the plot isn’t really important to Fox n Forests. Being inspired by 16-bit titles, the gameplay is the main focus and it shines, for a bit. Levels are laid out almost similar to Sonic the Hedgehog, having multiple paths and secrets all over the place. You could replay a level three or four times and have a different experience each run.

Fox n Forests is a 2D platformer that controls just like any classics you may have played. You’ll have access to a double jump, a ranged crossbow attack, a couple of melee attacks, and even a jumping attack. You can only use your crossbow while standing still, but after adjusting to this oddity, Fox n Forests feels just fine. Where it starts to differentiate itself is with the neat ability to change seasons.

The season tree grants Rick the power to change the seasons at will, though these are specific to each level. The very first world is themed around spring and Rick can change that to winter with the push of a button. This comes in handy for platforming, such as freezing over lakes or putting bees to sleep. It also comes up in combat at points, with you being able to make icicles fall from the top of a cave or revealing new platforms in the summer. Along with this, Rick can also upgrade his standard abilities to include different moves.

After amassing enough money and some collectibles, you’ll be able to purchase new techniques for Rick. These moves will include a second jump attack, a ground pound move, and magic attacks that you’ll store in bottles. These help to give the combat a more defined flavor, feeling unique instead of just aping the style of previous classics. It also feels reminiscent of Symphony of the Night, albeit with less focus on a sprawling map to explore.

The main progression through the campaign is linear, with you tackling four worlds all based around specific seasons. You won’t have a choice in how you unlock these levels, though you will need to replay past levels with unlocked abilities to gather enough magical seeds. World two, for instance, requires a quaint four seeds while the very final world demands 24 of them to open up. This could be seen as padding, but with how diverse and expansive each level is, backtracking is often a joy.

Even the boss fights that cap off each world are great, though a bit easy. They use a gimmick related to your seasonal powers, with world two being the best example. Here, you’ll fight a giant bee that you’ll need to stun before changing the season to fall and blow him into some spikes. I’m surprised how different each fight was, making me eager to get to the end of the current world just to fight them. The last boss is a bit of a dud, though, and mostly dies off without much of a fuss.

In a few levels, Fox n Forests will change to a side-scrolling shooter that also makes use of your season-swapping powers. You’ll start flying through a burning forest, but changing into a fall rainstorm will let you bypass any flames shooting from the ground. These levels can be a bit punishing (since you’ll only have a single hit point), but at least offer up some variety in the campaign.

To be honest, the only part I don’t care for is the penultimate level. World four starts with another of those shooter levels, but 4-2 is just a big slog. The level is easily the longest in the game and features way too many enemies, coming off as almost artificially difficult. It highlights how Fox n Forests doesn’t always have the most responsive controls.

This isn’t a game meant to be an action shooter like Mega Man and Rick just can’t fire his crossbow fast enough. Sometimes Rick will even fail to perform certain actions. Oftentimes I would do my double jump to start my ground attack, but Rick would do nothing while falling. Even the jump, itself, it slower than I’d like, which makes dodging some stage hazards a tricky endeavor.

There is also a lack of meaningful bonuses, with 100% completion mainly yielding bragging rights. You will unlock bonus stages, but those are literally coin rushes that give you too much money with no real effort required. The bonus stage in world two, for instance, hands out about 1,000 coins per run and can be repeated indefinitely. That breaks the progression system, making Rick way too powerful in a short amount of time. That being said, you will need to find all of the magical seeds in a world to get there and those aren’t exactly easy to find. For me, the real joy was just exploring the whole world of Fox n Forests. The combat is mostly serviceable, so my fun came from seeing how vastly different each level would be.

This is all brought to life with some beautiful art design. The color palette is beyond what an SNES could do, but the dedication to creating retro pixel art has resulted in some very attractive environments. Even the music accompanying them is fun, with certain level themes being eerily similar to Castlevania tunes. The length is also perfect, clocking in around five hours for your first playthrough. This isn’t dissimilar to a lot of SNES games from back in the day, but it has the added bonus of not overstaying its welcome.

It is a shame the game doesn’t end on a better note, but I definitely had a good time with Fox n Forests. It may not be the second coming of retro platformers, but it certainly feels like a lost gem.