The beat-’em-up genre has some serious classics in it; Turtles in Time and Castle Crashers immediately come to mind. There’s just something about those games that cement them as amazing experiences in our mind. Playing with buddies, throwing enemies at the screen, watching deer explosively poop, and some satisfying yet simple gameplay mechanics combine to bring smiles to our faces and put memories into our squish-brains.

Foul Play enters the genre with its own calling card: everything is done on-stage, in a theater. It’s a gimmick that works very well, but as I’m sure we all know, an aesthetic can only carry a game so far in this world. 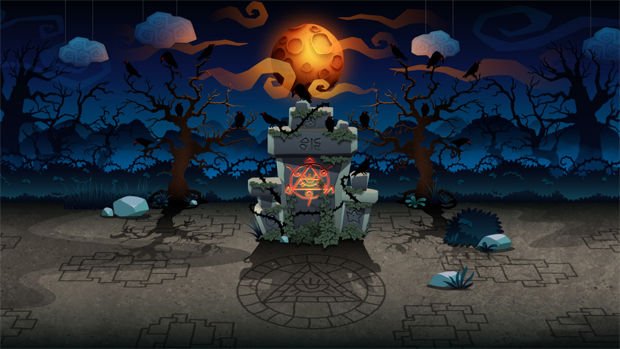 Foul Play follows the adventures of Baron Dashforth, a mustachioed demon hunter. He takes after and looks up to his father, who was in this line of work before him, and the game takes place as a series of flashbacks as Dashforth slowly but surely discovers clues relating to the whereabouts of his father. It’s a decent way to allow the player to experience a wide variety of locales without random transitions in between. As a plot, however, it’s incredibly thin and uninteresting.

The game’s entire shtick is that it is an on-stage theater play, complete with an audience, spotlights, and all-too visible stagehands. The story is split into five Acts, most containing five Scenes to break them up. Each one has a new aesthetic to it, which is easily one of the highlights of the game. There’s also a healthy dose of humor through the visuals as well as the dialogue, which luckily hits more than it misses.

But whatever! This is a beat-’em-up, right? Plot serves little purpose outside of the occasional laugh here and there and to spruce up and change the setting. All that really matters is how great it is to “beat them up.”

Unfortunately, Foul Play does nothing to distinguish itself from the other classic games of the genre. Players can dodge, parry, attack, and launch, with minor variations sprinkled in as the story progresses. Players will need to utilize each maneuver constantly, yet playing through a single act can still feel like a slog. The on-screen moves certainly look flashy, but actually performing them is tedious.

The health bar is actually a crowd interest bar, as there is no “dying” on-stage. However, if you put on a poor performance and get hit a lot, those curtains are closing. A star rating rates how well you are playing, and there’s a “super move” that will really win over the crowd for a certain amount of time. 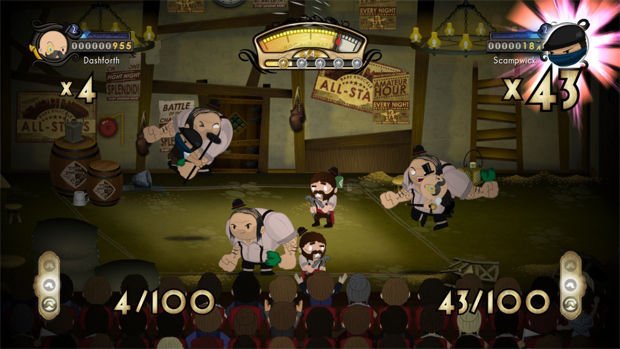 Every encounter in Foul Play feels exactly the same. If here are no big baddies, it boils down to mashing the attack button, launching one or more enemies in the air, and occasionally parrying to avoid damage. If there is a big baddy, either the roll will be utilized or more parrying will take place. Rinse and repeat for every single battle that isn’t a boss fight. Occasionally you will pull off a combo that makes you feel like a badass, though those moments are too few and far between.

The biggest issue here is the complete lack of enemy variety. Each new act introduces a few new enemies, but the only difference is their look. They all function the same, and as such are dispatched in the same way. Sometimes enemies will attack, sometimes they will shoot something, and sometimes they will grab. Oh, and the big ones can butt stomp but usually they just swing their big weapon.

This also leads to a lack of difficulty. Once the player understands how the enemies are defeated, it’s just a matter of repeating that ad nauseam until the screen is cleared. Any semblance of difficulty comes from throwing a massive amount of simple enemies at the player, instead of using more complicated enemies to force the player to use their skills in new and interesting ways. 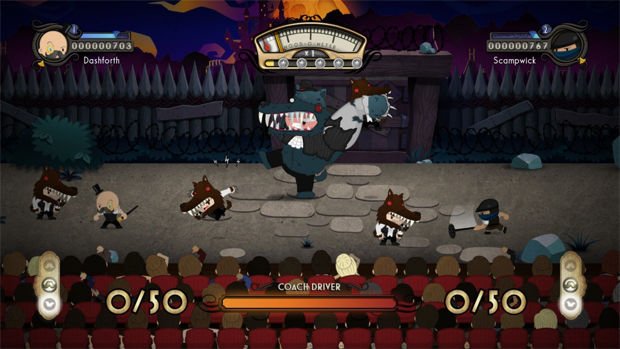 The bosses are certainly a welcome change to the monotony, and are legitimately interesting to fight. They each have their own little quirks that do actually force the player to think differently. Rarely are they difficult, but simply the change in schedule is enough to make them stand out in a sea of grey.

There are also challenges for each scene, tasking the players to achieve a certain combo on a certain screen, or to kill the big baddie last during a specific moment. They’re not particularly varied — only a handful of original challenges are recycled — but they’re enough to keep the player attentive.

Cooperative play, both local and online, is included but at this point, best of luck finding a stranger online to play with on PC. It’s also only cooperative for two players, instead of the four that most players will be accustomed to.

If playing on a PC, I can’t recommend a gamepad enough. The game was clearly designed for an Xbox 360 controller, considering the in-game button prompts are Xbox buttons even when using a keyboard (the menu button prompts are changed, however). Otherwise it controls just fine, though the classic “Am I lined up with this guy so I can hit him?” issue still persists as it does with many other beat-’em-ups. 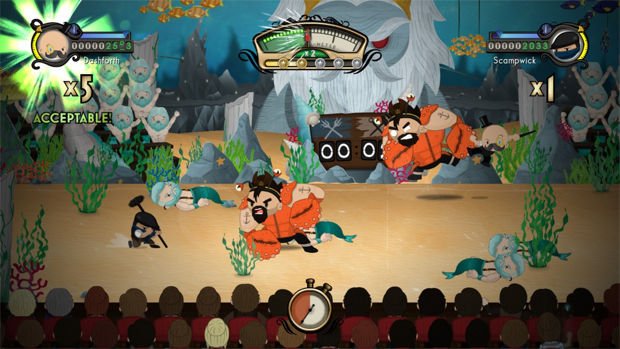 If there is one thing that demands the highest praise, it’s the aesthetic. As mentioned, the game takes place entirely in a theater, and by gum they commit to the theme one-hundred percent and it pays off tremendously. Enemies are clearly guys in outfits; scene changes see background pieces taken away to make room for others; stagehands get caught in the scene; and “dead” enemies peek around to see if the scene is over or crawl off stage mid-scene — these are all amazing examples of the how the aesthetic becomes the star. The music is appropriately old-timely and up-tempo, but the sound effects are lacking. Hitting enemies uses about two different types of sound effects and it quickly becomes noticeable.

Foul Play isn’t necessarily a bad game, it just doesn’t do anything to prove otherwise. It is a by-the-numbers game with a brilliant aesthetic, which in the end is just a by-the-numbers videogame. It’s too long for its own good, which only highlights the mediocrity even more as the same enemy behaviors are encountered for hours. The lack of depth hurts Foul Play the most, and it’s really a shame considering how brilliant the aesthetic is. I wanted to run around the stage, but playing the game made me exit stage left.