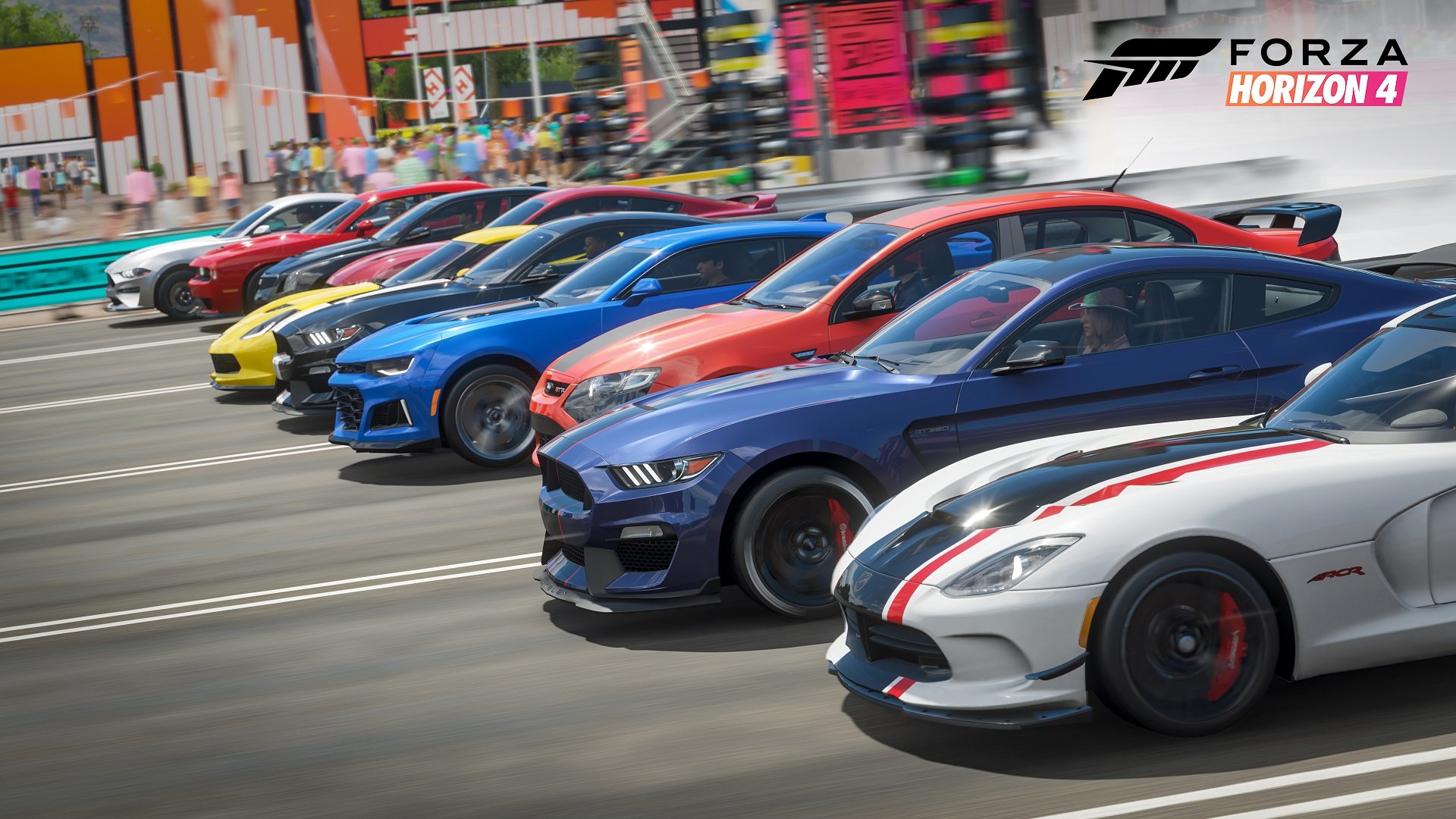 So many of the most popular video game franchises have continually pushed their luck and eventually lost. “You can’t have too much of a good thing” isn’t a motto that applies to games. Not forever, at least. Sooner or later, everything runs into the brick wall of diminishing returns.

Forza Horizon 4, the fourth Horizon game in six years, hasn’t lost that magic yet. Every other year, I quietly wonder if this is the Horizon that can’t quite live up to the game before it. That’s never the case. To borrow (and build upon) a line from our Forza Horizon 3 review, I still can’t find myself bored by launching off a stunt jump and soaring 700 feet through the air. There will probably be a point of diminishing returns for Forza Horizon, but it’s not here yet.

Variation is the predominant theme in Forza Horizon 4, and that’s most obvious as the game’s main hook. Seasonal changes take place weekly in real-world time. After an extended introduction phase that rotates through all the seasons (it takes a few hours), Forza Horizon 4 drops its entire base of players into the same climate. It’ll start on summer before moving to autumn on Thursday morning. The following Thursday, it’ll become winter. So on and so on.

There are two valid-but-sorta-opposite criticisms about this format. They are:

Ultimately, seasons feel like a necessary addition simply because of the setting. Playground Games’ take on Britain is pleasant and beautiful, but it can’t compare to Australia’s diverse terrains in Forza Horizon 3. There are a lot of rolling hills, there’s only one major city, and everything is just less unique. I can’t say for certain, but this map seems slightly smaller than Horizon 3‘s (which would make sense because, yeah, Australia is considerably bigger than Britain). The seasons are here to pick up the slack.

However, the most refreshing thing about Forza Horizon 4 isn’t a crisp spring rain or a brisk fall breeze. It’s how it drops the pretense that we’re here to be the best racer in the world. This game focuses less on racing and more on doing whatever the hell you want to do. Success is cumulatively tracked across all activities as “influence” and it all goes toward global influence. Everything has its own influence level. At launch, there are 26 different categories like: collecting cars, blueprinting events, playing in multiplayer, competing in all the different race types, banking skills, and streaming on Mixer.

Forza Horizon 4 throws its hands in the air and says “The world is your oyster. Have at it.” This is what the series has always wanted, but while also nudging you in certain directions. Now the nudges are gone. Forza Horizon is finally comfortable enough to legitimately let people play in whatever way is most fun for them. You’ll get rewarded for all of it.

It’s also kind of unsettling how on-the-nose the whole progression system is. Forza Horizon 3 tracked experience as “fans.” The more fans you had, the more successful you were. Forza Horizon 4 strips that humanity down to the one thing brands and marketers care most about: Influence. You’re only as useful as other people think you are. One of the Horizon Stories (ostensibly just sets of side missions) starts with a popular streamer telling you “My subscribers love watching you drive. This is going to be great content.” Yuck.

In other ways, Forza Horizon 4 does a commendable job humanizing this game where a car is the protagonist. Players are tasked with creating a character who is actually on-screen quite often. They’re shown before races, after races, and while spinning the Horizon Wheel slot machine. Clothes, accessories, and victory poses are all prizes. You can unlock the ability to dab after winning. It’s equal parts dumb and sorta great.

There’s an even greater emphasis on social interactions too, but in a relatively non-intrusive way. You’re dropped alongside other players in a shared world (I think 10 others was the most I ever saw pre-release). However, everyone’s a ghost which means there are no possible collisions. This eliminates the potential for open-world griefing. At one point, I saw another person trying to ramp off a hill to smash a bonus board that was on top of a house. I joined in and we took turns trying to nail the perfect angle and speed to nab this collectible. It was weirdly memorable.

Of course, there are more structured social opportunities. At the top of every hour, there’s a #Forzathon event where interested players gather at a meeting spot before setting out on a series of tasks. It’s a 15-minute scramble to complete three different stunts. For instance, there will be a shared group goal for distance scored on danger jumps. Players will rush to the spot, hit the jump, and turn right around to go at it again. Everyone moves on when you cumulatively bank enough points to pass the round.

Not being able to collide with other players is actually an extension of one of Forza Horizon 4‘s best quality-of-life changes. Now, when inside a stunt area like a drift zone, NPC vehicles are transparent. Anyone who has played the other games knows how frustrating it was to be on their way to three-starring a zone before hitting another car. That doesn’t happen anymore.

Similarly, the world keeps moving forward while you rewind. So, if you slam into another car and rewind to seconds before your mistake, that NPC just spins off the road or whatever. No longer will you keep making micro-adjustments and experimenting to maintain speed while barely avoiding that car. It might not sound like much, but it makes a huge difference when you’re just trying to get to a speed zone while going as fast as possible.

Forza Horizon 4 is another fantastically fun Forza Horizon game even if it’s tough to pinpoint Playground’s grandest ambition. If it was to reinvent the series with seasons, that falls a bit flat and underwhelming. But, if it was to simply remove the constraints and make everything as open and free as possible, then Playground hit its target in the most impressive way. Regardless, Forza Horizon is still the king of open-world arcade racers, and it really doesn’t look like that’ll change anytime soon.