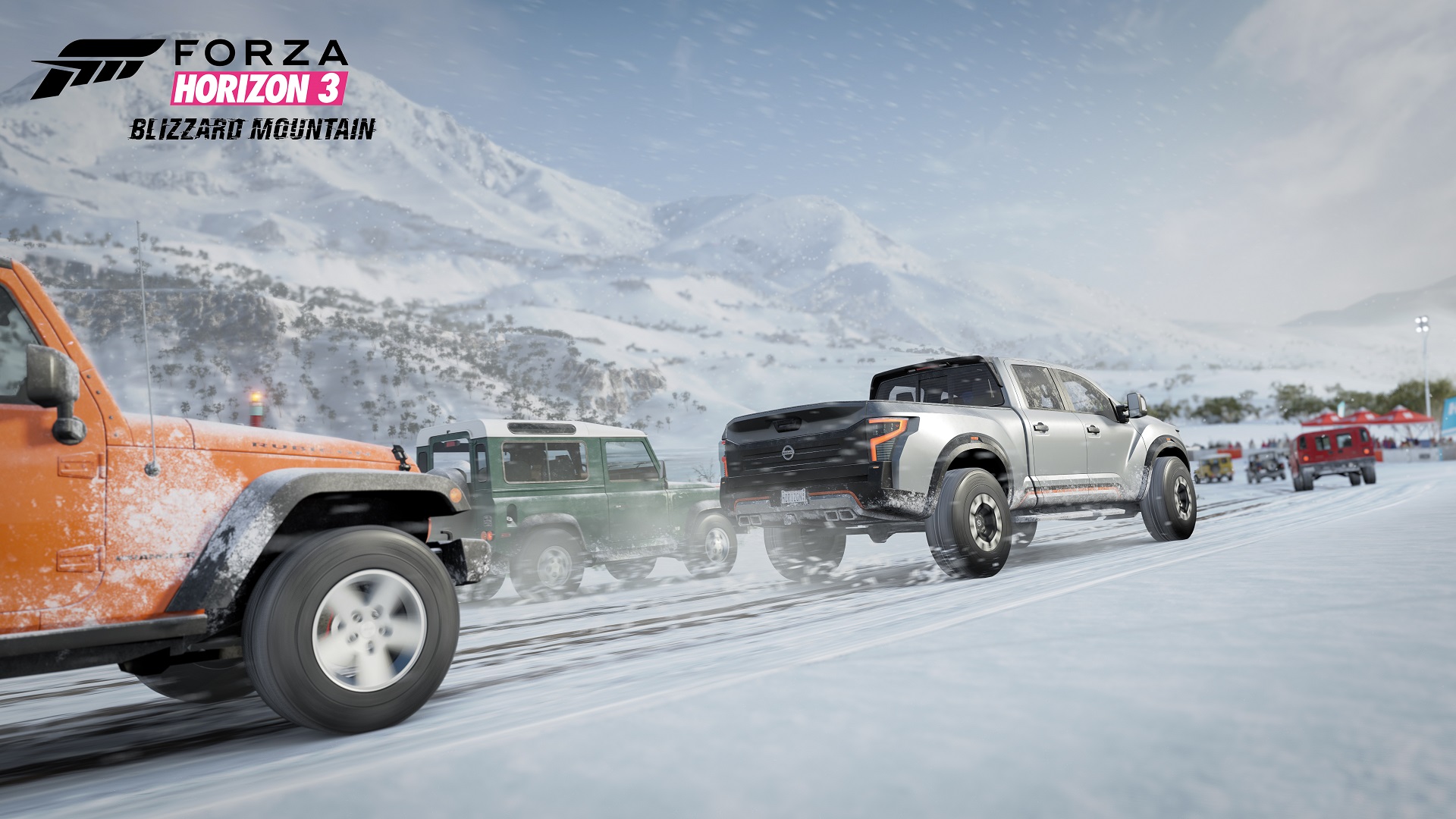 Blizzard Mountain is about as certain of a prospect as there is when it comes to add-ons. Take the perennially excellent Forza Horizon series and put it on ice. It’s that simple.

This works because any Forza Horizon DLC will work. The framework is just that good. A little snowstorm can’t bury this game; it can only accentuate it. 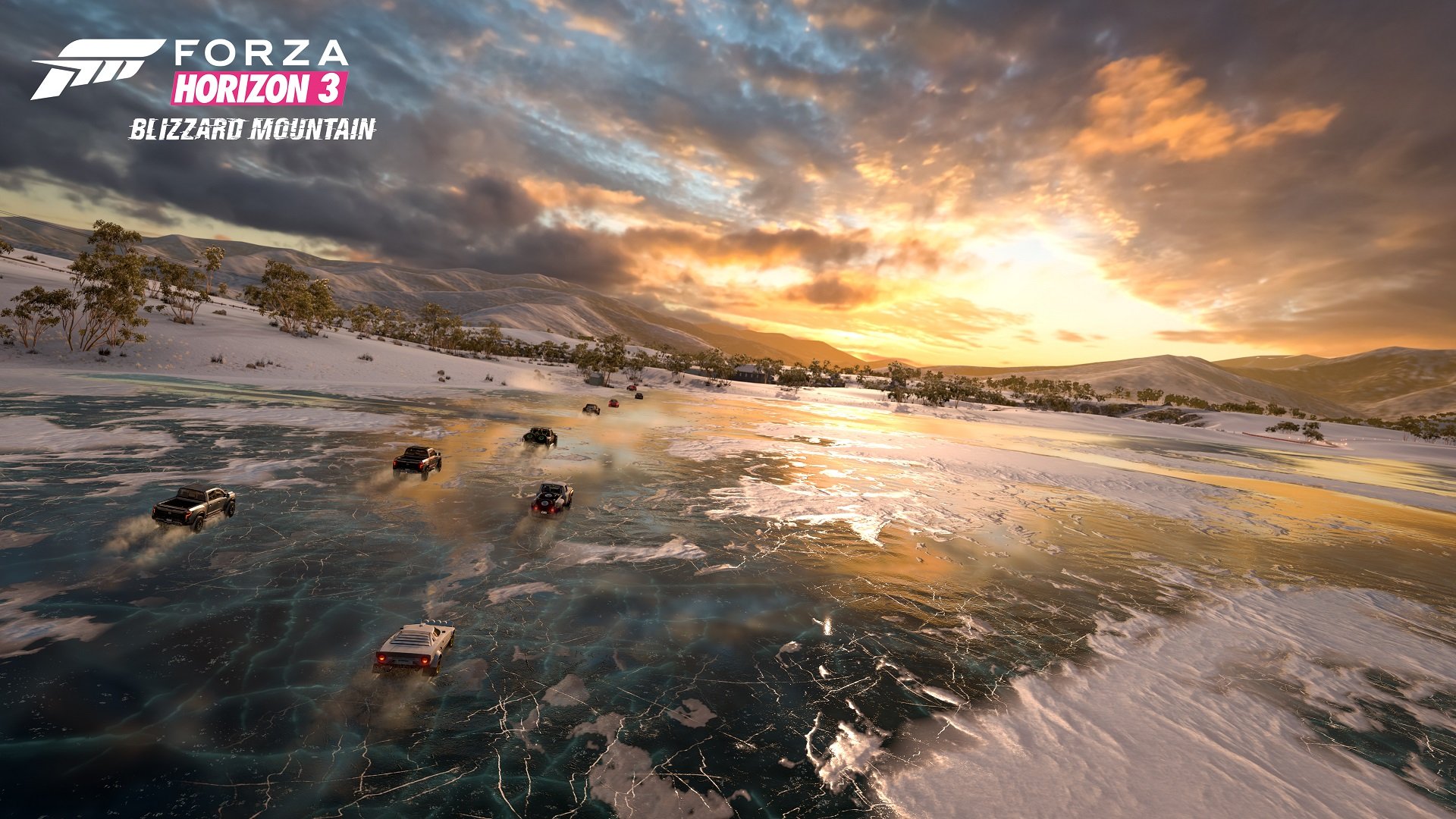 Australia gets snow, apparently. You wouldn’t know it by Forza Horizon 3‘s take on the outback because that’s all deserts and rainforests and cities. But Blizzard Mountain‘s first action is to dangle a car from a cargo helicopter (not actually put it in the chopper) and to jettison off to a winter wonderland.

That’s the exact moment — 10 seconds in or so — that you know everything will be alright. Blizzard Mountain‘s decision to suspend a car from a helicopter with the driver in it and then drop the car to the ground so it can race away to a festival, well, that’s about the most Forza Horizon move imaginable. Some ice on the roads won’t make Jack a dull boy.

Blizzard Mountain functions as a self-contained, miniature version of Forza Horizon 3. It’s set in a much smaller area (there are 50 roads to discover as opposed to the base game’s 488) with much fewer activities to partake in (there are 26 races as opposed to the base game’s 63). All of the standard fare Horizon 3 stuff is there — speed zones, bucket list challenges, danger jumps, etc. — it’s just less of it and with inclement weather. Showcases, the over-the-top action-filled races, are sadly omitted.

The progression of Blizzard Mountain also mimics Horizon 3‘s but with a twist. Instead of fans, we’re out to collect stars (although, this may be because I had already maxed out my fan count in the main game). Every tenth star unlocks a handful of new events and brings us one step closer to being crowned King of the Mountain.

It’s this star system that adds an extra layer of Horizon-like spirit to Blizzard Mountain. Each race has certain constraints to fulfill in order to earn all three stars. One star is awarded for completing the race. Two are given for completing and winning. Getting all three stars will require winning and performing an objective. This last feat is tied to the arcade nature of Horizon 3 and requires accomplishments like hitting a points goal throughout the race or nailing a certain number of ultimate air jumps.

The beauty of this is that it bridges the gap between the “win at all costs” mentality of the races and the “screw around and score points” mindset of the open-world. It asks that the player drive faster than the competition, but also that they do it with style. This rectifies a dissonance that I hadn’t even realized existed, but the experience feels more put-together as a result. It’s an improvement that should absolutely be carried over to future Horizon titles. 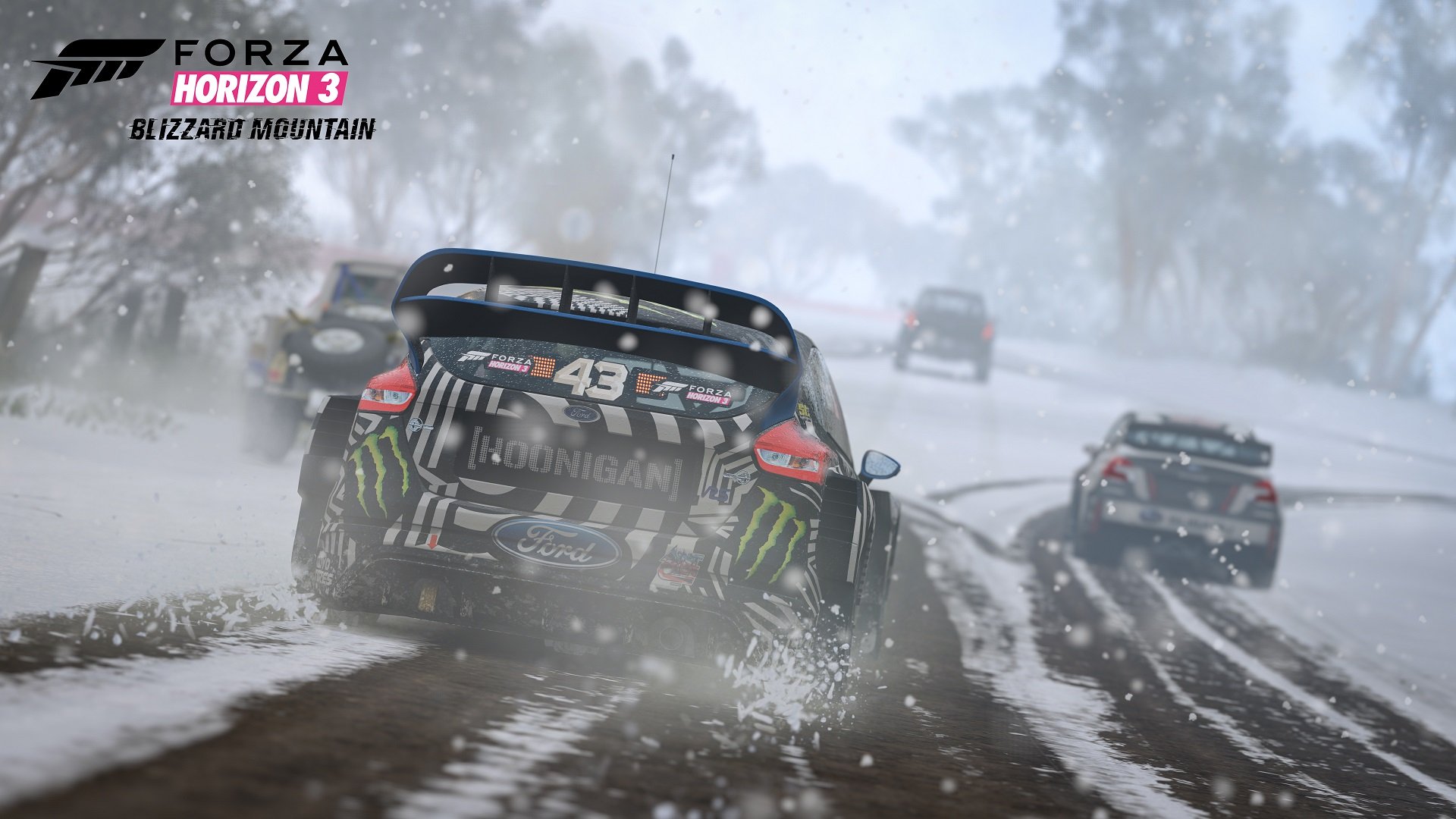 As the theme of this add-on indicates, it’s really the conditions that are the main attraction of Blizzard Mountain. Cold weather makes for some exhilarating racing whether it’s on black ice, through snow-packed fields, or across frozen lakes. Sliding cars around with just enough control to feel like a skilled driver proves to be endlessly entertaining. Barreling through a whiteout is appropriately tense and dangerous. Plowing through snowmen is devilish fun too, mischievous like a teenager smashing pumpkins on Halloween.

It helps that Blizzard Mountain offers handy amenities for the occasion. This expansion introduces snow tires, which are crucial for some events (the game goes so far as to warn you if you’re starting a race without them). Any car can be used but it seems as if Blizzard Mountain would prefer you drive the ones provided with the add-on. They’re already properly outfitted. Those are: the 2016 Ford Gymkhana 9 Focus RS RX, the 1966 Ford F-100 Flareside Abatti Racing Trophy Truck, the 1975 Lancia Stratos HF Group 4, the 1985 Lancia Delta S4 Group B, the 2016 Nissan Titan Warrior Concept, the 2016 RJ Anderson #37 Polaris RZR-Rockstar Energy Pro 2 Truck, and the 2016 Subaru #199 WRX STI VT15r Rally Car.

If there’s a knock against Blizzard Mountain, it’s that Forza Horizon 3 was already a robust package. Australia’s bursting at the seams with all sorts of activities, and it’ll take dozens of hours to complete them all. Blizzard Mountain‘s for those who are ready for more, because that’s exactly what it is: More. The setting is just a nice novelty. Dashing through the snow is a fine form of escapism from the hot Aussie outback, but it’s not an essential one.