The original Forza Horizon impressed us back in 2012 with its ability to incorporate what we already loved about Forza Motorsport into an absolutely massive open-world sandbox racing game, while not completely ditching its simulation roots and easing new players into an arcade-simulation racer hybrid. It also helped that the game was really nice to look at.

Playground Games and Turn 10 are back with Forza Horizon 2, and I am so glad they are. 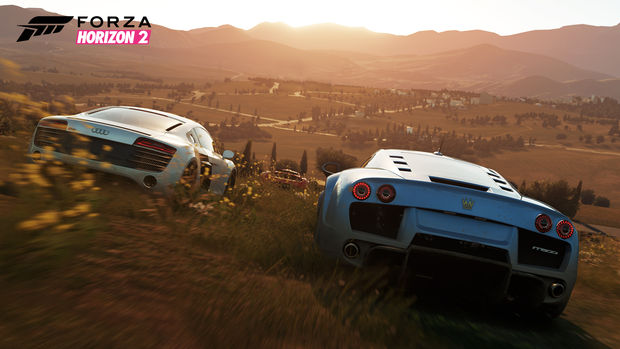 If you’re familiar with the first Forza Horizon, you’ll feel right at home. The Horizon Festival is taking place again, except this time it’s all the way over in southern Europe by way of France and Italy. Your role is, yet again, to become the top Horizon racer by collecting different colored wristbands as you win championships and work your way up the ladder.

Your progress is tracked a couple different ways. Obviously an overall level is raised by completing activities, and every level gives you one Wheelspin. The Wheelspin is a slot machine that either gives you a credit payout or a free car. I’ve gotten some sweet rewards from this thing. Tracking your progress is really easy with a win/loss ratio, but in Horizon it’s all about how cool you look while doing all this.

Drifting, near misses, getting air, and destroying things in the world can all add to a skill chain if done in a row. After accruing up a certain amount of points, these unlock skill points that can be spent on perks. Everyone loves perks. These are pretty standard, and increase things like bonuses, XP, or unlock certain abilities that make life easier. 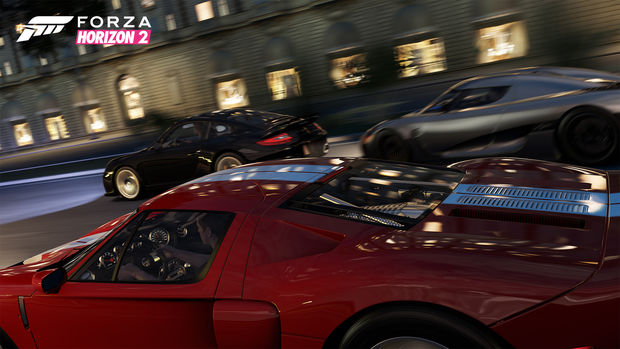 There’s a couple characters that interact with you over the course of the game; Ben and Ashley. Ben is the guy. He’s the type of guy everyone wants to know, party with, and, in Horizon 2, he’s that guy everyone wants to drive with. He’s the guy leading the Horizon Festival, after all. Be prepared to hear him say “mate” at the end of every single race. I promise it gets funny eventually.

Ultimately, he ends up helping the player learn the mechanics of the game, suggesting where they should go next, and even hooks them up with new rides every once in awhile. Ashley is the mechanic that fixes up all those new rides, and that’s all she’s really present for outside of being a support character.

As far as story and character development goes, that’s as in-depth as it gets in Horizon 2. That’s really all one expects from a racing game, anyway. It’s non-intrusive (nor over the top) to — and provides a good foundation for — the real focus: racing.

Forza Horizon 2 doesn’t attempt to shake up the tried-and-true racing formula. The championship event races break down into one of two types: beat everyone to the finish line in one long sprint or in a traditional lap-based race. Instead of structural variety, Horizon instead relies on locale and visual variety to keep players interested. This was totally the right call. 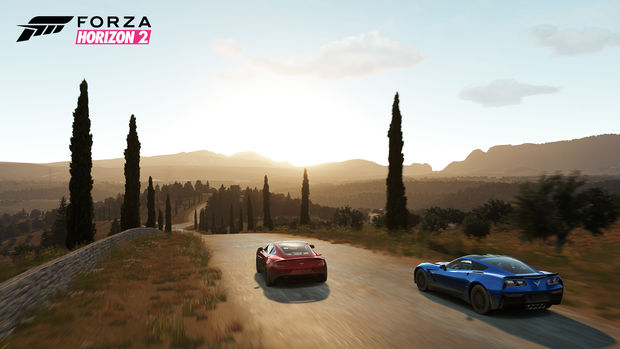 Forza Motorsport 5 was already a visual treat, but the heavily modified engine used in Horizon 2 is absolutely breathtaking. All of the 200-something cars are painstakingly detailed (interiors and all) as always, and are convincingly true-to-life. Southern Europe features back country, densely packed urban areas, coast towns, and everything in-between. It’s a very, very big world that’s incredibly open and just begs to be explored.

For the first time, Forza now has a dynamic weather system. Truly, this is the standout visual element in the game. Sunsets and sunrises are amazing, and never look the same as the cloud placement/density changes their appearance every single time. At any moment, thick clouds could fill an entirely blue sky and, suddenly, there’s a downpour of rain. Radio personalities will also comment on this when it happens, which is also pretty cool the first few times it happens. This isn’t just a visual trick either, as rain will puddle up in the roads, bead up on the cars (and windshields), and create slick conditions.

The visual effect on the windshield is particularly jaw-dropping; light will refract off of each individual bead of rain and cause visual interference just as it does in real life. Windshield wipers will automatically clear the windshield, and will leave a line of water wherever their turn radius ends. You have never seen something like this done in a racing game before, and it’s something you really need to see for yourself. 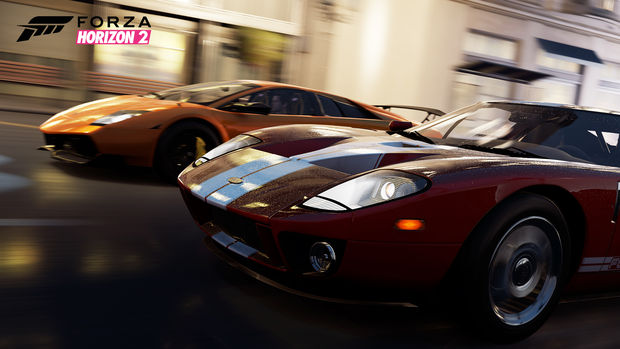 In motion, everything comes together to create one of the best-looking titles out there right now. Horizon 2 runs in full 1080p at 30 frames per second, never dipping below that. Some may have an issue with a racing game running at 30 FPS, but it’s honestly no problem here. Everything runs incredibly smooth and feels perfectly responsive. If I wasn’t told it ran at that frame rate, I would’ve been none-the-wiser.

Having a vast, detailed world can still feel empty fairly quickly if there’s not a lot to do, and thankfully Horizon 2 does not come up short in activities to partake in. Outside of over 150 championship events, there are Showcase events, barn finds, Bucket List activities, speed traps, and online modes. 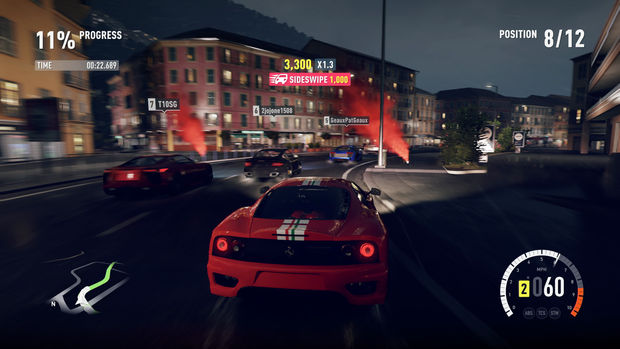 Showcases have the player up against some type of machinery (not a car) in a head-to-head race. They’re easily the craziest out of all the events, and, despite being blatant smoke and mirrors, created some of the most memorable moments in the game. Since there’s so few of them, I won’t spoil any of the surprise. Definitely be on the lookout for these every few championship events.

Barn finds are nothing new, and still task the player with finding an old, rusted-out vehicles in abandoned barns around the map. They’re actually pretty difficult to find. I found an army jeep in one of them, which felt particularly silly to bring into a racing event, but things like that fit right in with the rest of Horizon. It’s just a fun atmosphere.

Bucket List activities are pretty straightforward as well. These also involve finding cars around the map, placed on the side of roads. However, these cars are usually the best in the game and give a taste of what they’re like by completing small activities in them (with varying degrees of difficulty). Speed traps are simply just cameras that radar how fast you’re going on a particular road. Sometimes I’d try and beat my personal best on these over and over before I realized I spent a good twenty minutes doing this.

At any point, two button clicks will take you to the online lobby system. No menu navigating or lobby juggling needed, as it just works within the game and brings you together with strangers or friends in the full game world. You can participate in road trips, championship events, or explore parts of the map together. It’s the type of thing where the structured events are certainly fun, but I imagine the community coming up with pick-up games that add to the multiplayer’s longevity. 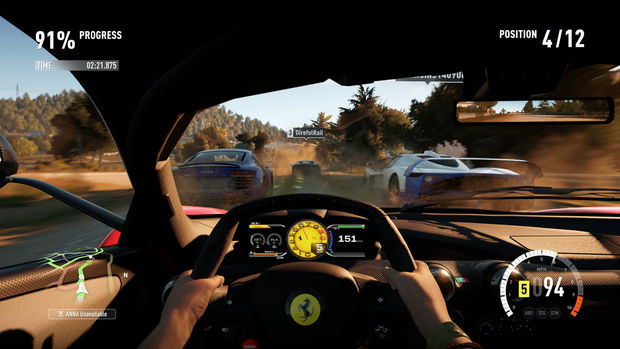 The avoidance of too much menu navigation extends into the rest of the game as well. If you have a Kinect hooked up, a digital personal assistant named ANNA can take your commands and make life a whole lot easier. ANNA allows you to just about play the entire game without ever using a menu of your own doing.

Say you know you just want to do the next championship event — you can have ANNA set the GPS navigator to take you to whichever one is nearest. She’ll also provide suggestions of things to do occasionally, or you can just outright ask her what it is she thinks you should do next. This system creates a nice flow, and truly enhances the experience. It’s the perfect use of the Kinect.

I’m all about a stellar soundtrack, and Horizon 2 nails it. There’s something to be said about driving a Lamborghini through a super dense field somewhere over 150 mph, barely able to see, with Chvrches is playing in the background. A soundtrack where Chromeo, The Clash, or Thee Oh Sees are just as likely to play as Vilvaldi, Schubert, or Tchaikovsky excites me like nothing else. Playground Games really knows how to make a road trip playlist. 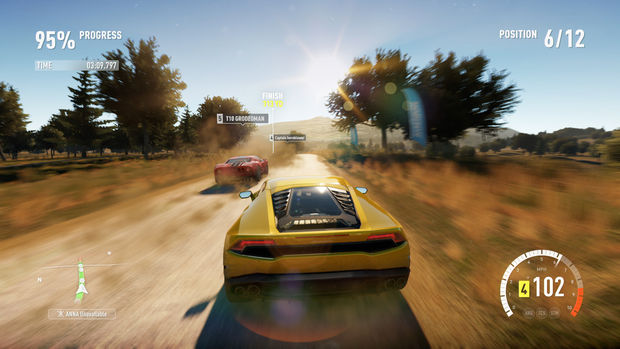 With the original Forza Horizon, we were a little disappointed in the frequency and length of the loading screens. Unfortunately, that’s still the case here. Again, the loading screens aren’t overwhelmingly long, but they appear before and after every single race. All that time adds up to quite a lot. It’s understandable that they’re there, but I could’ve done with less of them.

If you were a fan of the original or its simulator brother, there’s no reason to pass up Horizon 2. It’s simulation enough to not lose longtime fans, while easing the realistic driving just enough to allow new players to jump in and not feel like the car physics are working against them the whole time.

Every element in Forza Horizon 2 adds up to an exceptional experience. The story isn’t over the top so as to get in the way of racing, driving feels as good as it ever did in Forza Motorsport, there’s a ton of things to do, and the game looks absolutely beautiful — especially the long-awaited dynamic weather system. Forza Horizon 2 is a must-have on the Xbox One.