Rather than doing a traditional review for the equivalent of a Pepsi Man or Sneak King, I (Jeep) Wrangled Brett Makedonski to talk about the cross-over.

Steven: I don’t got friends…

I got family. Want to talk about 2 Forza 2 Furious?

Brett: Yeah, we can talk for review. Start with some dialogue, send it, and I’ll respond.

S: Too late. I’m counting the preceding as “started.” Everyone is going to see how the Destructoid sausage gets made. Boring fucking emails.

I am so very torn (I’m all out of faith, this is how I feel) on Forza Horizon 2 Presents Fast & Furious. On one hand, I am playing a free (without Xbox Live, but only until April 10) sampling of Forza Horizon 2 that feels like it contains enough of what Forza Horizon 2 is about — especially to me, as not a car person. On the other hand, the Fast & Furious partnership that bore this free thing feels too crass, too spurious. It’s just not there thematically because this is still Forza Horizon 2 (a very fun car driving game). NOS and racing for pinks feel like set dressing. Ludacris’ voice over linking races just feels sort of bland. They couldn’t even throw in a “Did you see that?”

B: Fantastic Natalie Imbruglia reference aside (I have a whole story about “Left of the Middle” for another day), this feels less Fast & Furious and more like a large-scale demo for Forza Horizon 2. If I can add a third and fourth hand to your two, this might be the best that Forza Horizon 2 ever gets. No boring C and D class races — just fun cars, and a campaign with a digestible scope. However, the Fast & Furious veneer isn’t fooling anyone. The one-minute unskippable movie sizzle reel at the beginning is the strongest the tie-in ever gets.

I don’t know that anyone expected this to be anything more than fan-service, but it barely qualifies as that. The NOS mechanic is the one alteration made to gameplay, and it doesn’t even do anything! It adds a filter to indicate that you’re going real fast, but you don’t actually gain ground on other cars. Maybe they’re all using their NOS at the exact same time I am. If so, it’s uncanny how that keeps happening. 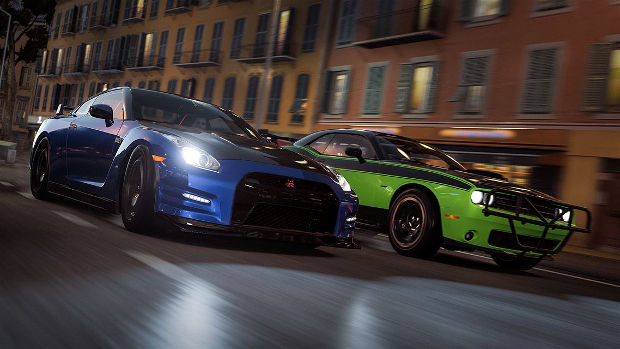 S: It’s probably the weakest boost I’ve felt in a racer. Seems to slowly up your top speed on straightaways.

The digestible scope thing is interesting because for as short as it is in terms of providing you with explicit objectives, the pace felt kind of whack. I already drove a McLaren in one of those skill point challenges before I won one in a race, and even then it was arguably not better than the Nissan GTR I used to win it. Plus, the few more cars you unlock down the line mostly drop from these super cars to A level or whatever, and it’s like, why am I going to trade down? If you’re a car nut, I guess. Or really want to drive a Jeep Wrangler.

Races are engaging at any level, though, whether your top speed is around 90 or 200 mph which is good because the latter half in the race progression doesn’t solely scale to super cars and will make you pick out other options in your garage. The skill point challenges, on the other hand, are rather dull or too easy. I drove around haphazardly burning out and running into things and aced most of them without much effort, save for the one that was like 25,000 points, which just took a bit longer.

On the other hand, one challenge that was a combination of the two — race to an end point in under two minutes and score 15 near misses with other cars — was a nice mix and fit a bit more into the Fast & Furious theme of skilled drivers doing exceptional and cool things with cars. Even if “get close to but don’t hit this many cars for no particular reason” is, well, arbitrary. Being able to come in first place consistently despite being a horrible driver that crashes monstrously evokes the opposite feeling, despite helping to keep things light.

B: That isn’t so much a problem that’s inherent to this particular piece of content, so much as it is of Forza Horizon in general. And, if you want to go broader, it’s really the case for any racer that doesn’t pride itself on being simulation-like, or whatever. I mean, it’s easy to forget when the mediums stay in their respective corners, but when you try crossing them over, you realize that in a lot of ways, Forza Horizon 2 basically already was Fast & Furious: The Videogame. That is to say, it’s just a lot of fast racing and over-the-top stunts that generally require a suspension of belief.

S: That’s it. This is fun because Forza Horizon is fun and it is nice that it’s free (until April 10), glorified demo that it is, but it makes me yearn for an actual Fast & Furious game with a “Press F to drink a Corona” prompt and a Han lives retcon.

[This review is based on a retail build of the game downloaded for free on the Xbox Marketplace.]