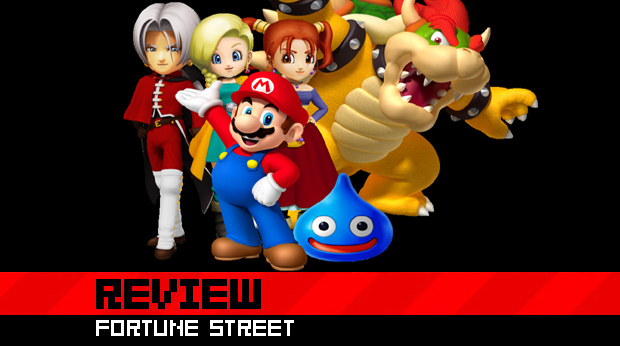 At first glance, Fortune Street may look like another Mario-themed, board game-structured mini-game collection. It’s not. Anyone who picks this game up expecting another light, mindless, motion-controlled mini-game romp like Mario Party 8 or Wii Party will be sorely disappointed.

It really shows that the Itadaki Street (Fortune Street‘s Japanese name) series was created by Dragon Quest series designer Yuji Horii, and not just by the fact that it’s totally infested with adorable Dragon Quest monsters. Just like Dragon Quest, Fortune Street is a turn-based, menu-driven game of patience that will reward you kindly if you take the time to level up your characters and manage your resources, and punish you dearly if you try to rush through things and take the easiest path to victory. I’m sure that some of you out there would consider that a “party” or even have PhD’s in business management and/or advanced statistics.

Fortune Street has the cold, brutal soul of a old-school, turn-based RPG and the face of a steely-eyed accountant, all wrapped in a cute candy shell. Read on to see if this is a cold candy that’s right for you! 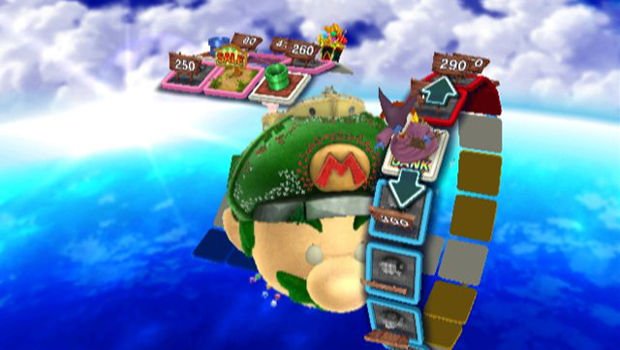 The easiest game to compare Fortune Street to would be Monopoly, though Fortune Street is much, much more complicated. Most virtual board games seem sort of unnecessary to me, as all the game does for you is move your character around, roll the virtual dice for you, and keep track of whatever numbers are involved. Fortune Street is something else entirely. Between the buying and selling of stocks, fluctuating values of various properties, and 15 different boards, there is a lot to keep track of.

It all comes together to create a game that almost has what it takes to win over hordes of people who would normally not enjoy this sort of “casual” game, as there is really nothing casual about the level of depth presented here. Sadly, Fortune Street still has enough cracks and quirks that it’ll probably only appeal to hardcore financial strategists and board game enthusiasts. 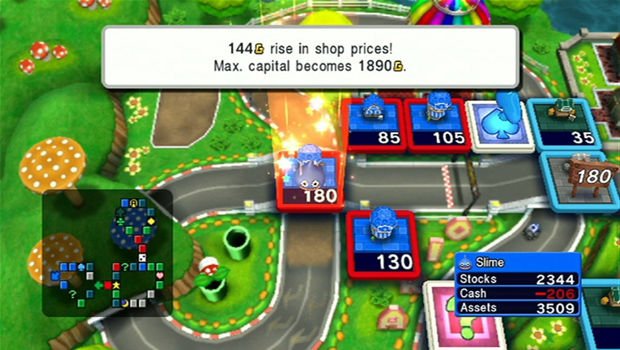 The game basically works like this: you start at the bank which lies at the center of the board. From there, you roll the dice and decide what direction you should head down (usually left or right, but some of the bigger boards may give you more options). Then you purchase property in the Monopoly style, roll more dice, choose the direction of your path again when you hit a fork in the road, and make your way around the board as you see fit. The four corners of the board contain special blocks that represent the four suits (Hearts, Clubs, Diamonds, and Spades). Hit them all and head back to the bank and you level up, which scores you some dough and better stats.

While at the bank, you can also buy and sell stocks, which is where a lot of the advanced strategy comes in. Buy stock in someone else’s property and you’ll increase how much profit they make off of said property while skimming a bit off the top for yourself. You can also invest in your own property, bolstering its profit potential at a cost, buy and sell property with other players, and partake in a variety of other financial strategies. Factor in different strategies around where you buy property and which property is geographically more likely to turn a profit (for instance, properties near the bank have a higher chance of being hit by other players, etc.) and you have a lot to think about, definitely more than in your standard game of Monopoly. 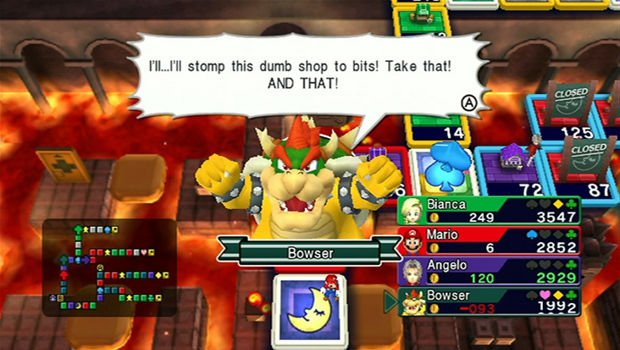 If that’s too much for you, you can turn on “easy rules” which disable the whole stock system and generally streamlines things. This version of the game is still more complicated than most board games but is a little more accessible; it’s probably the best bet for new players not looking to be weighed down with too much too soon.

Also there to keep things light are the “fun” squares on the board that have all sorts of random purposes. There is one that sends you to a carnival where you play a Mario Party-style mini-game (Slime racing, darts, etc.) for some money. Don’t worry, waggle haters — none of the games I played were motion-controlled, and they always ended within a minute or so. There are also blocks that allow you to play a Super Mario Bros. 3-inspired “flip the card” game of chance, transportation squares, and other oddities. Again, all this might have been too much to keep track or just wouldn’t make any sense in a “real” board game, which further justifies Fortune Street‘s existence as a videogame. 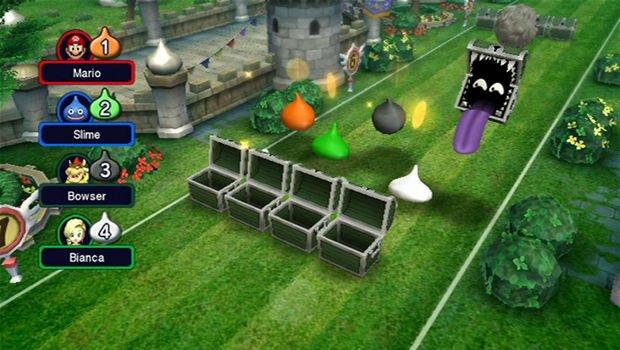 Then there is the global online play, which I’ve had zero issues with in terms of lag or other online difficulties. There are generally a lot of people around when I sign on (most of them from Japan), and our matches are as smooth and breezy as you’ve always dreamed an online board game simulator could be. There is no chat or other bells and whistles, but the basics are there, which is probably all someone planning to play this game online will need.

With Fortune Street, all the fundamentals are there, but the devils pop up in the details. For starters, it takes forever to play through your average game. The game itself moves along fairly quickly, without too many lengthy animations to sit through, but there is just so much to the game and it’s so hard to win (or lose) that it just goes on and on and on. I’ve played a match online that lasted five hours (though my average match has been closer to two to three hours long). That would be okay if you could save and quit, but expecting anyone to spend half a work day playing a board game simulator is asking a lot. 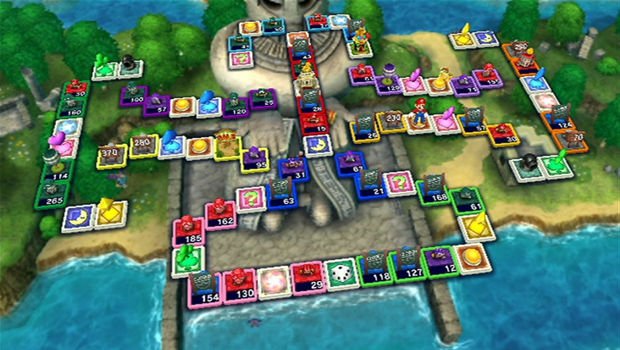 There is also the fact that, in order to unlock all the game’s boards, you have to play through the exceptionally long and repetitive campaign mode. This goes for a lot of the Mario-based content, too. Many of the boards and their accompanying musical themes available from the start of multiplayer mode are based on the Dragon Quest universe, and as such, lack the pep and punch necessary to keep you from falling asleep during one of those two to three hours games. I had a hard time keeping my friends playing past the third round on the first board we played on, which featured some slow baroque jams and a relatively lifeless castle in the background.

Things don’t get that much better on the Mario stages either. Songs tend to be a bit peppier, but generally speaking, there still isn’t a lot going on there visually. Generally speaking, the game doesn’t have a ton of personality, something that can really hurt a slow grind like this. For example, I have a close friend (who may appear in a future episode of TtWaV) who plays Monopoly Streets on the Wii several times a week because she thinks the Wheelbarrow character is hilarious. If it weren’t for Wheelbarrow’s snorts and swearing under her breath, she probably wouldn’t play the game that often. From what I can tell, Fortune Street has no such comic relief character. Though the text-based dialog can sometimes be a hoot on premise alone (minor Dragon Quest enemies like Slimes and ducks talking about how badly they want to become financial tycoons or mafia bosses is pretty charming), the dry delivery and tendency towards repeating the same text causes things to get old fast. 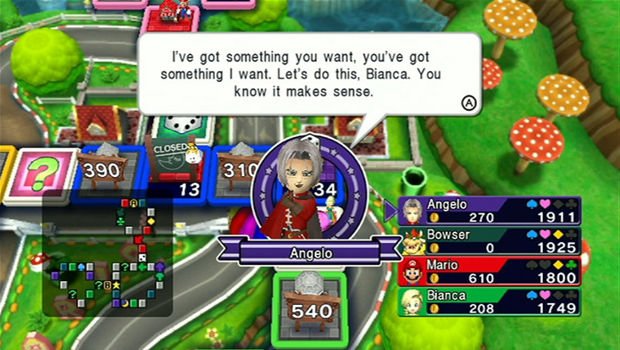 The part of me that loves money-collecting competitive board games is totally ecstatic that the Itadaki Street series has finally made it out of Japan, while a much more dominant part of my personality is aware that I won’t ever make time to play it. The game’s average speed, measured in stimulating moments per minute, is way too low for it to ever become a priority in my life. I do plan to play it with friends every once and a while, but I’ll have to pick those friends carefully.

Fortune Street is so dense, complicated, and time consuming that it’s hard to imagine that your average mini-game fan will be able to get into it, especially if they were expecting a short and shallow series of 30-second competitions. Factor in how dry and personality-free the game can be, and you have a real tough sell for those looking for anything less than the most complex multiplayer finance-based board game on the market. That said, if you like the idea of an online-enabled Super Monopoly Streets Fighter II Turbo, then this game will more than do the job for you.