Fortnite is a weird as hell project that is now dominating the world with 125 million users. What started off as a fully PVE (a mode called Save the World) joint that sought to capitalize on the survival genre is now a fully-fledged battle royale, and along with PUBG, is responsible for popularizing the subgenre that’s been around long before them.

In that sense, it’s two separate games. The PVE portion is still in early access and has loot boxes. Battle royale has a sleek season pass, offers zero items that impact gameplay, and is completely free.

I think you can guess which one I prefer. 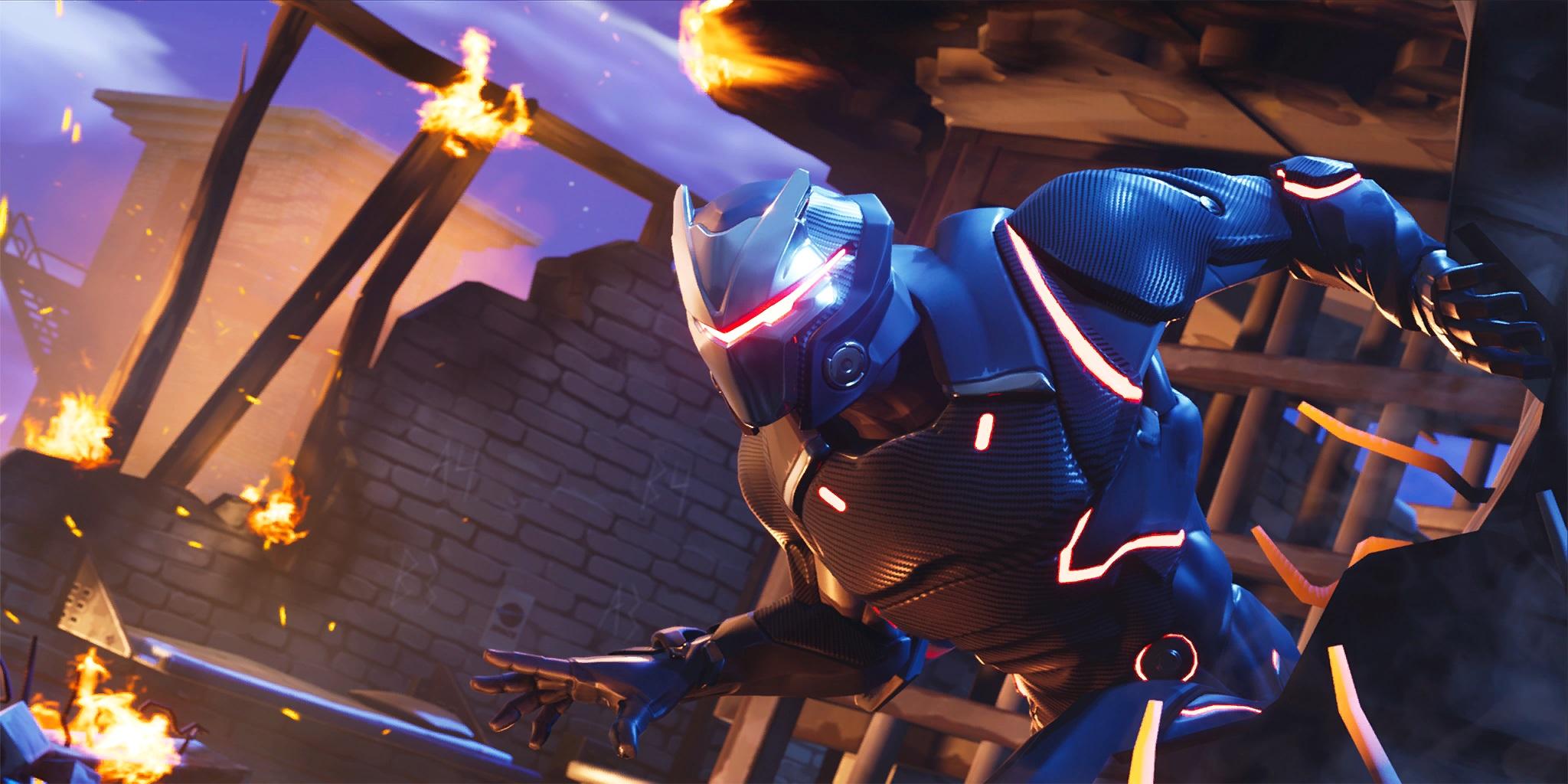 Like several other ports Fornite Switch solely consists of the battle royale mode. It’s been pretty obvious where Epic is taking the game, leading some to believe that eventually after they fulfill their commitment to finish Save the World they’ll mainly just focus on battle royale. That’s 100% speculation, and it’s a wonder how they’ve managed to support both modes all along; but the time has come for Fornite to spread its eSports wings and its runaway PVP success is just too gargantuan not to nurture.

Anyways, that’s where Epic is at, and that’s what you’re getting on Switch. Occasionally Fornite will offer up special limited modes like a Thanos battle or a 50v50 war, but for the most part you’re dropping into a giant map solo or with a small squad in a group of 100 with the objective of becoming the last person standing. To prevent matches from taking too long, a giant damaging circle of doom (purple clouds here) ensures that the game ends in a timely manner. It’s the same shtick as a lot of other games you’ve seen before (especially after this recent E3), but Fornite manages to do things a little differently and with a little more panache.

Aesthetically Fornite shines with its brash style. It’s cartoony, and that’s something you might not be into, but it’s distinct enough to picked out of a lineup with all of the other gritty military/zombie themes that studios love to peddle. Characters — even randomized avatars that aren’t named — are emotive, and Epic keeps rotating in new weapons/gear and updating its map to ensure that there’s something new each month.

The construction/building mechanic is the main mechanical concept that sets it apart from the pack, and although I was resistant to it at first it really came together after a few weeks of experimenting with it. The basic gist is that you can make barriers to guard against enemy fire at will and build staircases to ascend to greater heights, as well as build full-on forts to hunker down in. It’s intuitive even on a controller, as all it takes is a button press to swap into build mode, complete with a cute blueprint item for your avatar to hold.

There are a few caveats on Switch but it’s nothing too major. For one the draw distance, pop-in, and texture detail from a distance aren’t as impressive as its rival consoles, which is very much inline (if slightly improved) with the mobile version. I also noticed a bit of stuttering in a few games, especially around launch, but I haven’t experienced it since I popped back into TV mode. There are no concessions for the touch screen or gyro aiming at this time, though Epic is looking into it (several times I tapped my Switch in an attempt to swap weapons…no dice). If the Switch had the tactile advantage of a controller and the touch-based options of the mobile version, it would be a force to be reckoned with — even if I still prefer a mouse and keyboard setup (especially for quick building) at the end of the day. Bottom line it’s better than the (good) mobile versions but not quite as smooth as PC or consoles.

I’ve been playing Fortnite for…around eight months now, and it’s slowly worked its way into my normal rotation of shooters. I got my wife into it, a few friends into it, and we’ll play it together or solo frequently enough. It’s even easier to justify popping into a short game with the mobile edition, and naturally, on Switch so long as wifi is on the table. All of this time I’ve been paying close attention to the patch notes and the frequency of them, and man has Epic been killing it. While other developers are keen to rest on their laurels or think they simple know better, Epic has humbled themselves on several occasions and has provided very quick fixes for anything from technical issues or balance problems.

And they don’t just share their findings with vague forum posts — they’ll often break down exactly what happened, why it happened, and how they’re preventing it from happening again. Revering the development process of a live game doesn’t always warrant a mention in a review, but it’s become so intrinsically linked to Fornite that it really elevates my experience with it. Even if I take a break I know that when I come back it’s probably in a good state, and that overall the project is in good hands.

Another bit that helps make Fornite‘s battle royale mode more enjoyable is that it isn’t trying to constantly steer you into the act of gambling. There are no loot chests at the moment in the free battle royale mode, just a straight cosmetic shop, and it’s further supported by a great (actual season) season pass concept that I’ve talked about at length in the past that grants you more goodies for leveling up during normal play. It’s all non-intrusive and easy to understand: you go into a game, level up, get rewards, and if you want, buy cosmetics. That’s it. You can play Fornite the same way on every platform, even on mobile. 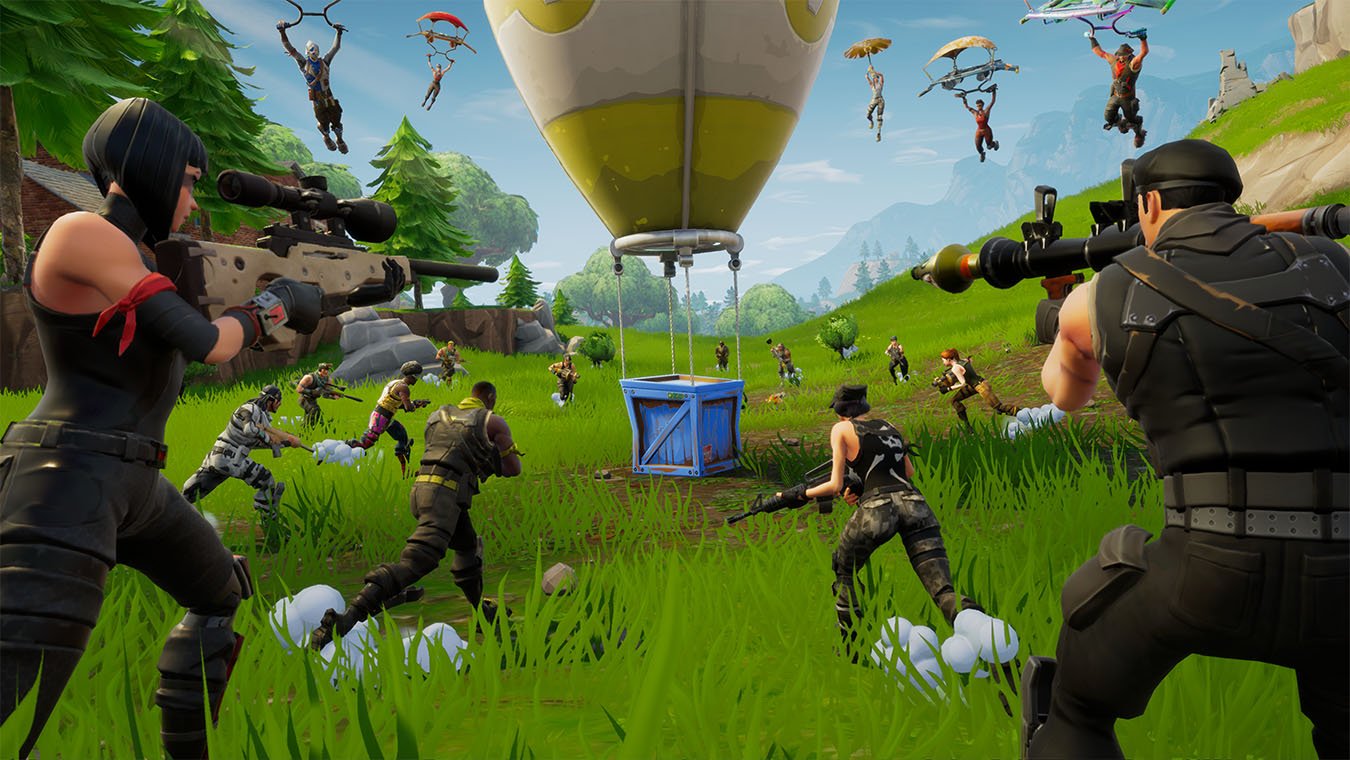 That said, and this is through no fault of Epic (and thus won’t impact this review), Sony is making it really hard to enjoy the whole “cross-play” thing. Incredibly, the Switch edition is compatible with the Mac, PC, mobile, and Xbox One versions of Fornite, linking everything together in one ecosystem. If you want to play with the same platform you can do that (my first game with Switch-only players I got third place!), or you can opt to form parties through your Epic account or mix in with other systems — except PS4.

The block Sony is putting on cross-play is so bad that you can’t even link an existing Epic account to your Switch if you already linked it to your PS4. It’s unbelievable, and has exceeded well beyond a pissing match between arch-rivals Sony and Microsoft. Epic seems to have their hands tied, but Sony needs to answer for this sooner than later.

If you can get over that hurdle, just go ahead and download it now and give it a go on Nintendo’s little portable console that could. Fortnite on the Switch is still Fornite, albeit with a few graphical concessions. And Fortnite is good.

[This review is based on a retail build of the game downloaded for free by the reviewer.]