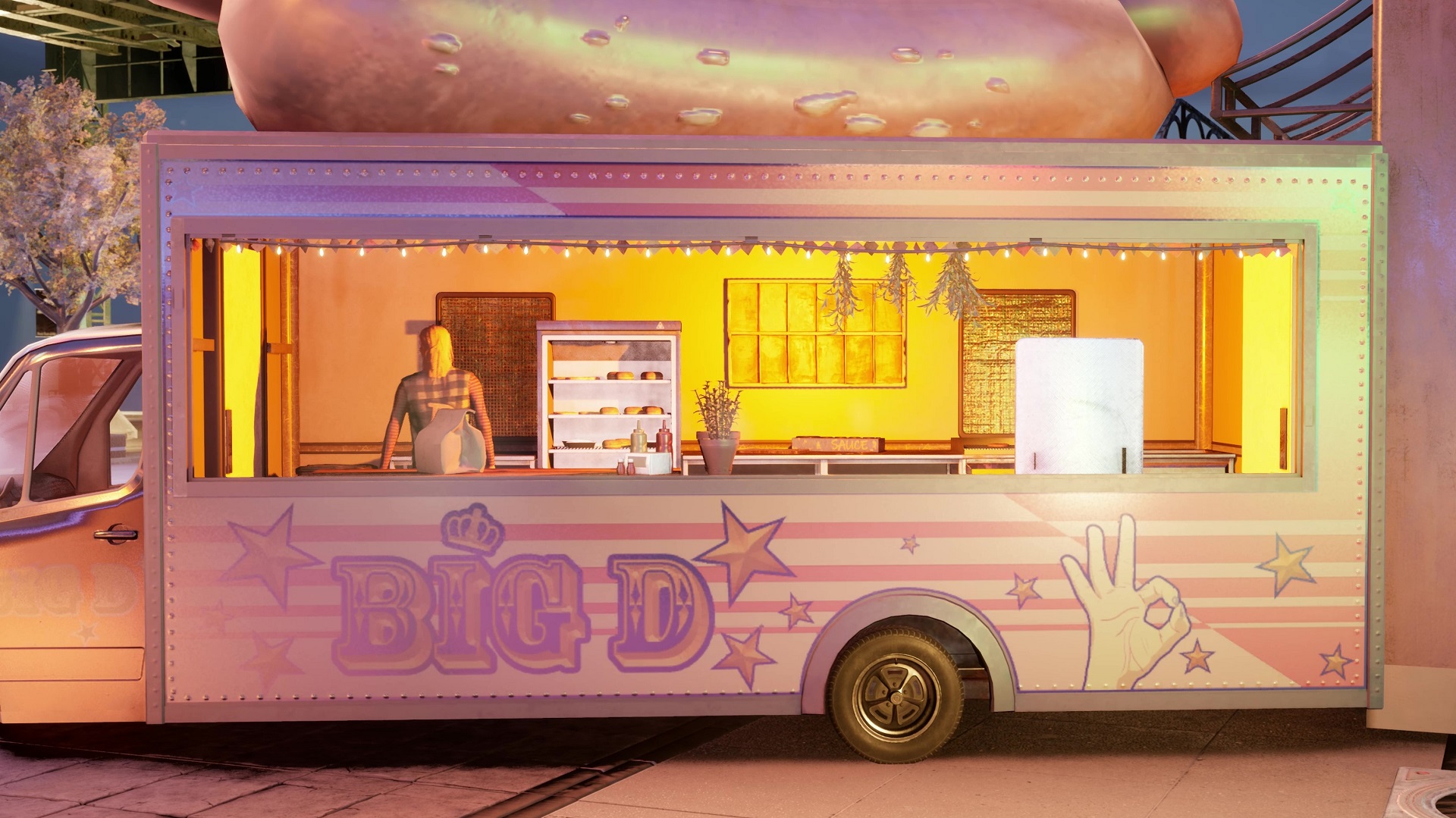 Take this job and shove it

It finally happened. I’ve been broken. I do my best to play through each game that comes for me as thoroughly as possible, but I just can’t do it for Food Truck Simulator. Which is a shame because I really liked Gas Station Simulator. I like what Drago Entertainment is doing by trying to build a shared simulator universe. I appreciate their vision. Goofy simulators also have a solid space in my heart.

But Food Truck Simulator is undercooked. I hate to pull out one of those puns that normally go in the closing paragraph of a review, but its biggest problems are all related to not just a lack of polish but a dearth of care. Considering this was, weirdly enough, one of my most anticipated games of this year, the disappointment is all mine.

While the name makes the subject matter clear, what you really need to know about Food Truck Simulator is that it’s wonderfully hands-on. It’s not just about managing a business but also about doing the dirty work; buying ingredients, driving to spots, doling out food. In fact, the management aspects are very subtle, clearing the way to perfect your cooking craft.

The actual cooking is pretty fun. There are four types of food that you sling from your truck window: burgers, fries, pizza, and sushi. They each have their own ingredients, with a few crossing over, and they all have their own methods of cooking. Food Truck Simulator is at its best when it allows you to focus on multi-tasking, juggling multiple orders, and trying to get them out as quickly and accurately as possible. It also manages to get a nice balance of detailed mechanics and fun flow.

Then on top of it, it heaps a number of complications. While that’s to be expected, the problem is that none of them are as fine-tuned as the cooking.

Mustard and mayo on fries

For starters, you have to get through the multitude of tutorials, which is a horrible drag. The story starts off with you picking up your late father’s dream of being some cool food truck guy. I guess it’s a bonding thing, but it’s a bit late for that. You start picking up the pieces, but then someone literally sets you on fire. So you pick up the pieces again, then you learn how to make pizza, then you learn how to make sushi, then I guess you can do those things on your own. It’s made worse because Food Truck Simulator keeps pushing this really tenuous story about bonding with your dad. The main character’s voice sounds like someone is intentionally doing an impression of the most boring person they can imagine.

You might notice some major issues before the tutorial even ends. The press notes I got indicate a day one patch, but some of these are problems I saw in the demo months ago, so I’m not sure what faith I have. The performance is terrible. I’ve got a modestly beefy setup, but driving around the city gave me a lot of stuttering, which seems to be a problem with its level of detail streaming. But then the framerate also tanked whenever I spread pizza sauce, and you’ve got me there. It’s not the most advanced marinara physics I’ve ever seen, so what’s bogging things down is beyond my meager knowledge of game design.

The bugs were what caused me to struggle early on. Before I even finished the tutorial, I got this bug where I cut up a chili pepper, and the pieces of it disappeared. Fine, I could just cut another, except no I couldn’t. It still registered something on the cutting board, so it completely prevented me from completing any more orders. So, I reloaded the most recent save, and it started me off with the objective to buy all the supplies for my next job. The problem is: I had all those ingredients already filling up a lot of space in my truck.

So, before I could buy more, I had to empty what I had in the truck just so I could rebuy everything. That’s a huge pain already, but then I couldn’t figure out how to remove stuff. You can go to your inventory, but the option to throw stuff away isn’t there. No, instead, you have to buy it, go to the store, and only through the store’s menu can you remove items.

Just give me something crawling with parasites

I have a massive tolerance for bugs. I’ve played some rickety games. Food Truck Simulator just couldn’t find a way to make it worthwhile to go beyond.

Part of the issue is that the economy drove me nuts. You’ll always have to juggle the food you sell. Each spot has two preferences, so if you go to the nightclub, you’re serving burgers and fries, but if you go to the port, it’s pizza and fries. That’s a good idea because it’s hard to keep a stock of all those prepared ingredients, especially since there’s no opportunity for prep cooking. However, ingredients go bad, and they go bad very quickly.

It’s almost better to just focus on one location since it’s easier to keep a fresh stock of those ingredients. There’s a limited amount of storage space in your truck, to begin with, so rotating through all the food types is needlessly difficult. If you do dare to juggle what you serve, get ready to throw out a lot of food, and as I’ve already established, throwing out food is not very intuitive.

Hold on, I need to get something off my chest. How does soy sauce spoil, but mayonnaise doesn’t?

The economy is so screwed up. You can do side-jobs, and one of them is at a gas station. Completing these jobs will unlock fast-travel points throughout the city. However, using these requires you to pay, and that can cost upwards of $100. Do you know how much money you make at these side jobs? It’s not much more than $100, so why the hell would I spend that on fast travel? Even making money feeding the masses doesn’t make it worthwhile.

You also have to gas up your truck, which you can do with a jerry can in your garage or from a pump at a gas station. I initially thought that it would be cheaper to do it in your garage since it takes longer and is slightly more complicated, but that doesn’t seem to be the case. Meanwhile, you can order ingredients on your computer, and if you go to pick them up quickly enough, you get a discount. If you just drive to the store, not only do you not get a discount for some reason, but each store only specializes in a specific stock. It doesn’t make sense.

It’s a felony to tease the order box

The most heartbreaking part of Food Truck Simulator is that the core gameplay is solid-ish, but the foundation they put it on is built out of Saltines. I feel like I could stick my finger into every orifice of the game and come up with a different disease each time. It’s rotten.

A lot of it could be fixed. Some of it might be fixed with the day one patch, and I even considered delaying this review to see if things improved. However, I stumbled across so many issues that I can’t fathom a patch bringing it up to snuff. During my gameplay, I found myself thinking of possible DLC that adds Mexican cuisine and pastries. By the time I finally had enough and walked away, the only thing I wanted was a playable experience. This chicken is still pink in the middle.