Standing in the Heart of Madness

For many western ’80s kids, Akira was their first introduction to anime, with Katsuhiro Otomo’s dystopian classic being one of the first anime movies to get a major push by the mainstream media. For me, however, my first anime encounter was the 1986 movie version of Buronson’s post-apocalyptic manga, Fist of the North Star. I had a third-generation, blurry-as-fuck VHS, which I had to keep hidden under my bed because my upbringing was wholly censored.

I remember, like many fans experiencing FOTNS (or anime) for the first time, being blown away by how incredibly violent it was, and also being hugely confused by the movie’s massively unsatisfying non-ending, a culture shock for a kid brought up on movies that always tied narratives up neatly by the end credits. Still, that movie – and its AMAZING mid-fight rock track – are ingrained in the membranes of everyone who’s experienced it.

Sega’s Team Yakuza were clearly also impressed and influenced with the ultra-macho tale of massive dudes, ridiculous martial arts, and exploding heads. They have, essentially, given their Yakuza engine a new coat of paint, based on the story of Kenshiro, Shin, Yuria, and top motherfucker, Raoh. But does Fist of the North Star: Lost Paradise ease my pain, ease my loneliness, or is it already dead? 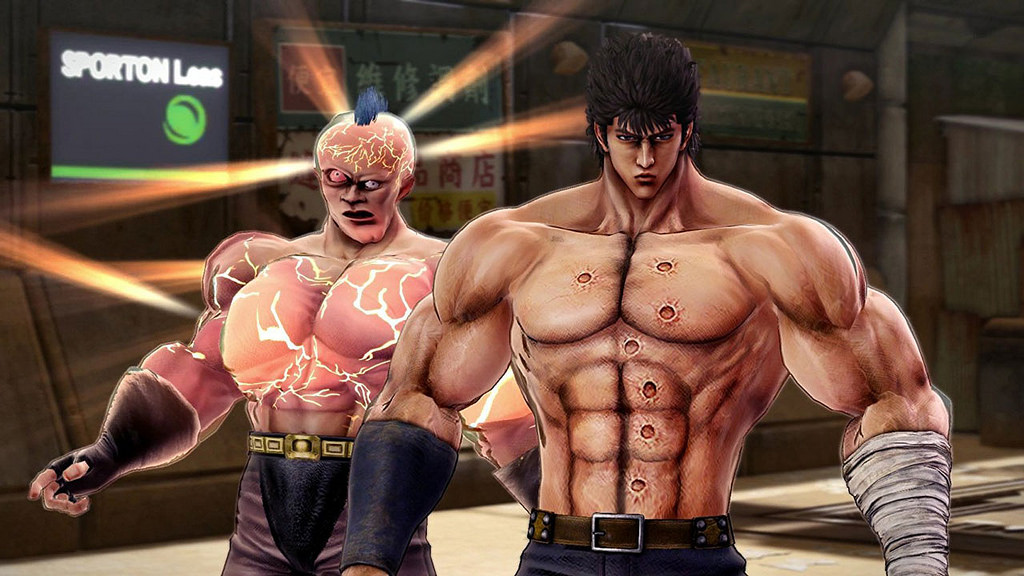 Fist of the North Star: Lost Paradise presents an alternate take on Kenshiro and co., keeping the general thread of the manga but weaving in new locations and characters. For the most part, the story aligns, including all of FOTNS‘ greatest hits. The scarring of Kenshiro, the hunt for fiancée Yuria, meeting Rei and the rescue of his kidnapped sister, sidekicks Bat and Lin, as well as brutal, bloody face-offs with jealous brother Jagi, noble master Toki, and the prideful Shin.

Although the material of the main story thread is treated with a respect very befitting of its legendary status, there is a weird pacing issue with Lost Paradise. Far too long is spent on busywork, investigation, and running from location to location around Eden (which, for want of a better example, is Lost Paradise‘s “Kamurocho from Yakuza“). When the iconic conflicts do occur, they’re poorly placed in the story, often smothered by menial tasks that have led to the moment, such as fixing up a buggy’s wheels, or literally wandering around town talking to people for information. Weirdly, what should be absolute highlights on Kenshiro’s quest come across more as footnotes. No better exemplified than in the tutorial, which is Ken’s fight with Shin, the very man who scarred him and kidnapped his fiancée. This is resolved in the game’s first three minutes. Odd.

For the most part, it’s a great retelling of the FOTNS lore, with suitably stoic performances and some welcome new characters, such as frenemy Jagre and the bewitching, cigar-chomping Lyra. It must be noted that non-fans may find themselves rolling their eyes after hours upon hours of macho posturing and characters endlessly repeating that “my style cannot be defeated.” It goes with the territory, and FOTNS fans, myself included, wouldn’t have it any other way, but it can fall flat for newcomers.

Gameplay is straight-up “stripped down Yakuza.” It’s lazy to say so, but there are no two ways about it. Once arriving at Eden, Ken jogs around town, getting into random encounters, solving up to 80 sidequests, and constantly pushing through a chapter-based main story. Lost Paradise leaves it a little late to open up freedom to the player, arguably only becoming “open-world” around Chapter Five, almost halfway through the story. Once it does however, it’s the tried-and-true Yakuza system of helping the innocent, getting jumped in alleyways, and fetch quests. Team Yakuza has fortunately been given a little leeway here, as there’s a surprising amount of genuine comedy, such as a local council committee dedicated to teaching Kenshiro how to “use his words” to solve battles.

Battling is a huge, huge, HUGE part of Lost Paradise, as Ken takes on literally hundreds upon hundreds of enemies while on his dangerous quest. Although very similar, almost identical, to Yakuza in concept, the FOTNS fights grow repetitious quickly and lack its brethren’s variety. Lost Paradise foolishly locks away a huge gamut of moves and skills for hours, and as Kenshiro has no need for weaponry, fights feature mashing out the same few max-damage combos time and again.

The canned animations of exploding bodies are amazing, and a lot of fun, but you’ll be seeing them the best part of a thousand times, and they lose their allure pretty quickly. Locking away parries, reversals, jump kicks, grabs, and many other moves until a huge chunk of time has been put into the title is a mistake. Players want to hit Start and become The Fist of the North Star, the successor of Hokuto Shinken; making them play for hours before they can parry, or do a simple running attack, is a bad call. 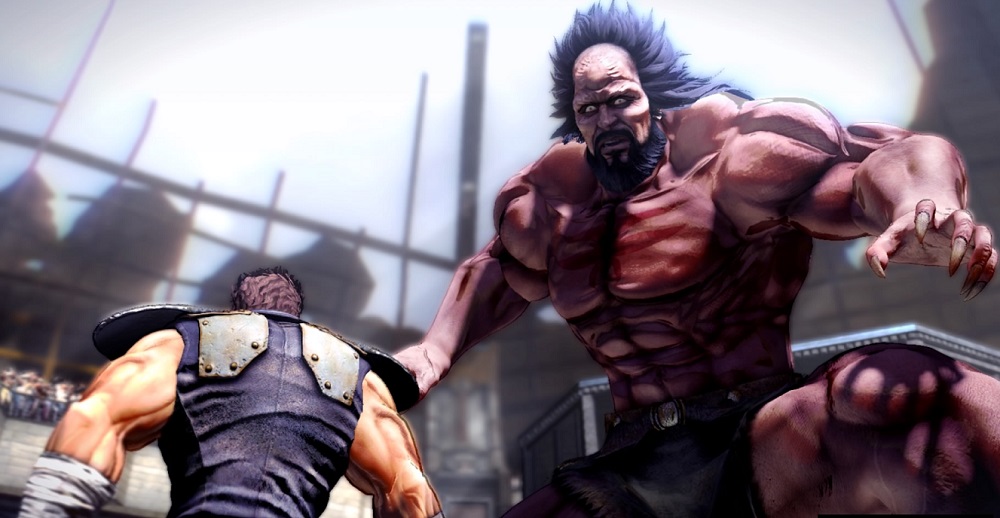 At this point, it might start to sound as if Lost Paradise is a bad game, which is far from the truth. There is a lot of atmosphere, design, and character on display. It’s also jam-packed with things to do. A so-so driving system allows Kenshiro to explore the Wasteland on wheels, via a customisable buggy upgraded using a rudimentary crafting system. There are also a glut of very silly mini-games, which see Kenshiro work part-time as a bartender, nightclub host, gladiator, and even a doctor (in a rhythm-action game that just has to be seen to be believed).

There’s a hilarious take on a batting cage, an anachronistic casino, store orders to be filled, and treasures to be found out in the desert. For its missteps, Lost Paradise delights with its wealth of side-quests and mini-games, though most of them are just variants on the same games we’ve played in other Team Yakuza titles. The art style captures the universe perfectly, all insanely-muscular dudes with tiny heads, giant hands, and massive scowls, defending beautiful, waif-like women with persistently sad faces. Of course its hardly a progressive form of storytelling, but Fist of the North Star has forever been the anime equivalent of a testosterone overdose, delivered fist-first, with a broken needle, straight to the eyeball.

There’s nothing in Lost Paradise that makes it a “bad game” per se, it just doesn’t excel in any particular area, missing the pedigree of its developer. Perhaps with a cheaper price tag, or a release during its original Japanese launch when we weren’t inundated with amazing open-world titles, Lost Paradise would find a bigger audience. But at sixty bucks, standing against open-world/gang-battle titles such as Marvel’s Spider-Man, Assassin’s Creed Odyssey, and even its own “Aniki,” the Yakuza series, Lost Paradise is missing the magnetism to rank it a contender for anyone who is not already interested in Kenshiro’s gory universe of fists and fury.

Fist of the North Star: Lost Paradise is a passionate retelling of one of history’s most violent, bare-bones, and overwhelmingly macho tales. In that capacity, it does a great job. But it’s not quite the masterpiece it could have been, let down by repetition, unlock grinds, and a lack of polish in narrative and mechanics. Regardless, with bucket-loads of adventure on offer, and a cathartic dose of the old ultra-violence, Lost Paradise is a fine weekend-filler, and a proud reflection of its legendary source material.