Not all videogames have the same goal. Some seek to challenge the player, others, to relax them. Halfbrick usually resides somewhere comfortably in the middle, with easy-to-pick-up titles like Fruit Ninja and Jetpack Joyride — but this time, they’re going all out relaxation.

Fish Out of Water is their newest iOS release, featuring gameplay that equates to nothing more than skipping stones across a pond as you unwind your mind. And you know what? For the most part, that’s okay. 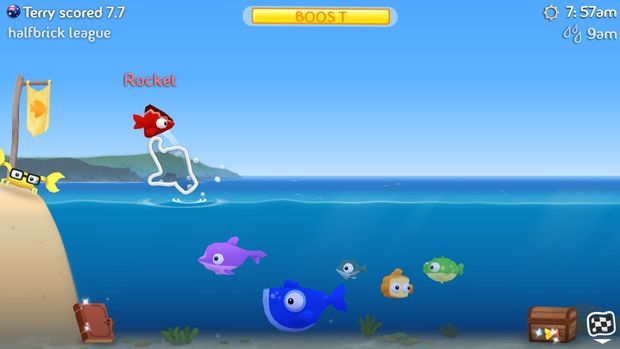 Fish Out of Water, simply put, is a game about throwing and skipping fish across the sea for points. You’ll choose from a pool of six fish — including a dolphin, which the game highlights is not a fish — as you set out to appease five crab judges and earn the highest score possible.

One fish excels with horizontal flings, another, vertical movements. One of the fish splits into multiple fish to maximize skips, and another can be flung really high into the air for maximum distance and so on. As you fly through the air, you can randomly pick up boost orbs. Reading the weather and decided which fish to fling, and the technique of the actual toss, is key to consistent success, but beyond tapping the screen to boost at the right moments, there’s a massive amount of luck involved that may turn off people looking for a deeper play session.

As shallow as it sounds, it’s actually pretty fun in short bursts. Like an interactive zen garden, the plopping sounds and whimsical music are fairly relaxing, and although it’s a departure from the unique graphical style of Halfbrick’s usual work, the cute designs work on a fundamental level.

Fish has a rudimentary “challenge” system in place, tasking you with goals like “skip 50 times” or “maintain a certain speed for 15 seconds.” These goals help to keep you engaged, but they aren’t nearly as interesting or addictive as say, Jetpack Joyride‘s challenges. Most of the goals are dry, and don’t really do a good job of making me feel like I absolutely need to complete them, which is a problem.

There’s a “league” system in place, where you can sign up to represent a named team (such as Destructoid, or Reddit), with a scoreboard that collects every member’s maximum rating and pits them against other teams. It’s a somewhat neat feature, provided you’re willing to link your Google or Facebook account to do it.

But despite the zen-like nature of the game, one of Fish Out of Water‘s major faults is the lack of replay value. The maximum score you can earn is a cumulative “10,” and on top of that, fish don’t have individual power-ups to utilize, which leads to a homogenization of gameplay. Maybe if each fish had a leveling system, where you could actually feel a sense of progression, I would feel the urge to push on — but as it stands, I’m only compelled to pick the game up for a few minutes, then put it back down. 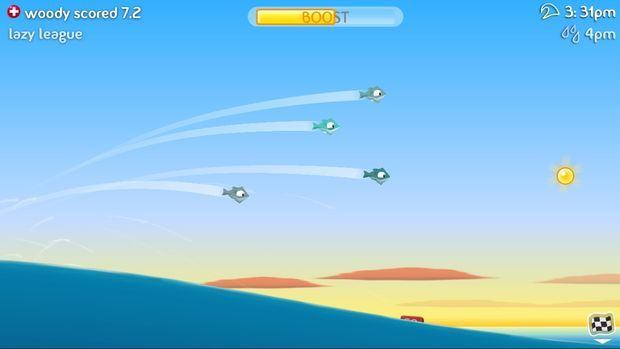 The magic of most of Halbrick’s games is the addictive need to keep playing at all costs. In fact, I spent three hours once running through Jetpack Joyride‘s challenges until I effectively “beat” the game, only to prestige and keep playing more. With Fish out of Water, it’s not the same experience, as it can really only be played in short spurts.

Fish has in-app-purchases, but they’re so hard to find that I almost think Halfbrick didn’t even want to include them. If you click on a tiny icon in the corner, you can buy a collection of one-use power-up crystals to buff your fish — the same crystals you earn through completing challenges. While  almost a non-issue, it’s something to be aware of.

If you’re looking for a new time waster, Fish Out of Water is a decent experience, despite its lack of depth. If you require something with a little more meat on its bones, feel free to wait, because in all likelihood, just like Jetpack Joyride, this will go free at some point given the fact that in-app-purchases are already featured.