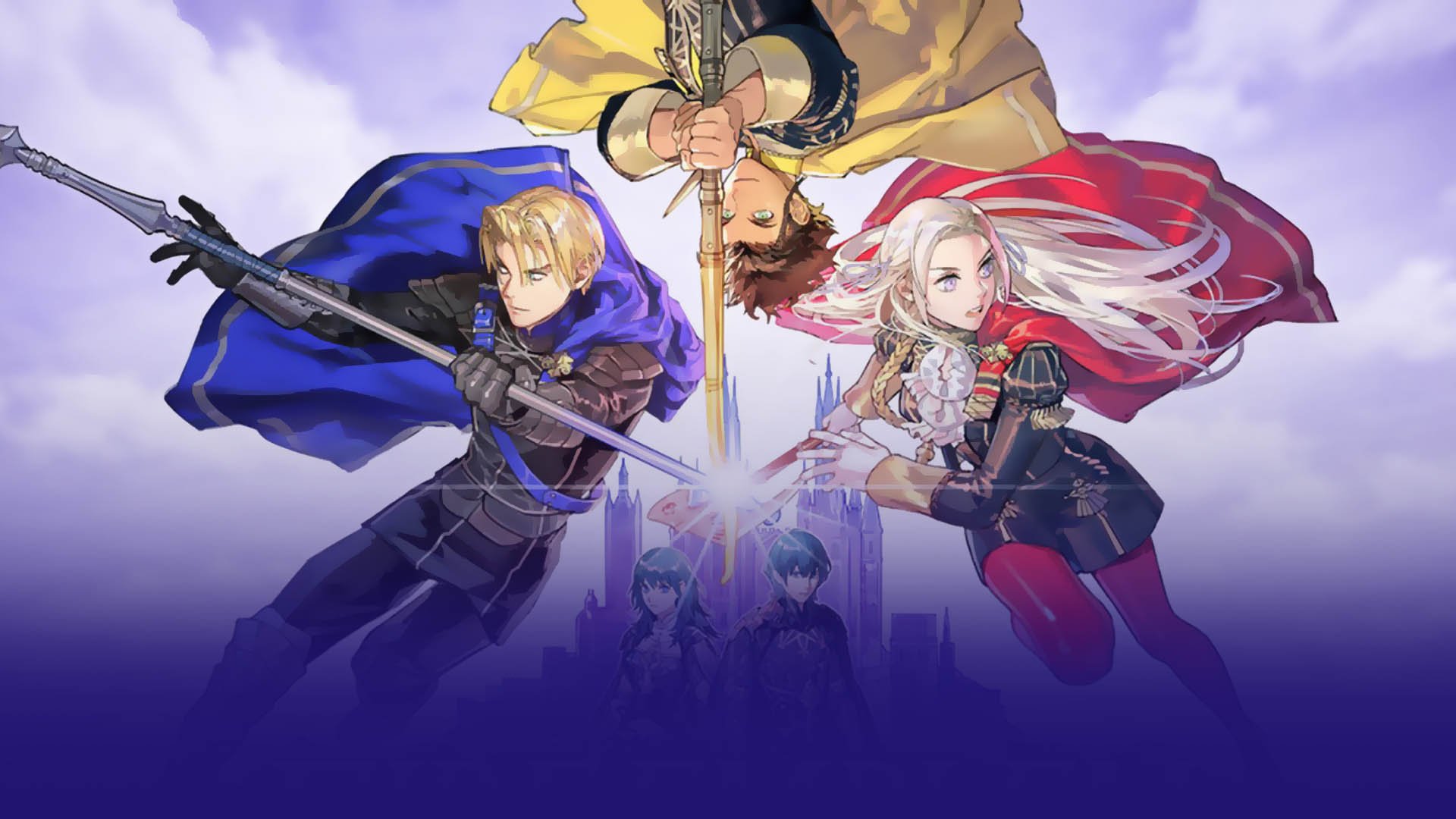 And you may tell yourself, ‘this is not my beautiful house’

It’s hard to believe that we could be living in a world with no western Fire Emblem availability. We can owe it all to Super Smash Bros. Melee, which sort of introduced the series to the west by way of Roy and Marth, and the rest is history.

Western audiences immediately resonated with the strategy series by genre veterans Intelligent Systems, and they never really looked back. From there, Nintendo did everything they could to spread the word with retro re-releases and timely localizations. We are now finally at the point where Fire Emblem games are worldwide releases.

Fire Emblem: Three Houses is a perfect game to usher in that standard.

Gone is the “multi-game” concept of Fates. Instead, you’re buying one release in Three Houses, which offers up the typical kingdom versus kingdom intrigue by way of one unified branching storyline. Although I dug the idea of getting two full games and viewing the different perspectives in Birthright and Conquest, the back-to-basics approach is appreciated here.

The narrative is far from “basic,” however, as Three Houses takes a decidedly Hogwarts-esque approach in framing everything around a powerful school that has a role to play in the territorial conflict to come. While the school’s houses are indeed three strong, there are also three nations in the picture, all with their own wants and needs. Yep, it’s a Fire Emblem game alright.

The first thing that grabbed me: the stunning character designs and cutscenes that pop. Man, this game is mesmerizing — not just in the context of its anime sequences, but the way the in-game engine is able to capture that anime feel. The ability to play Three Houses on the go as a bite-sized strategy experience or binge it on a gigantic TV that highlights all of the visual nuances is a microcosm of bliss: a perfect reason why so many people have resonated with the Switch. Anyway, Three Houses!

Speaking of anime feel, Three Houses doubles down on the over-the-top nature of the past few entries, which is either a boon or a curse depending on what side of the coin you’re on. Me? I dig the harrowingly real, violent anime cutscenes juxtaposed to the absurdity of eating entirely too much tuna fish with your classmates and engaging in silly, jovial conversation. Spending a lot of time at a kooky school having tea with your friends is a really easy way to forget about the horrors of war. Fire Emblem kind of rules, doesn’t it? That’s to say nothing of the introduction of a time lord-esque diety in the first few minutes.

Without spoiling too much, Three Houses‘ narrative gist involves spending a ton of time with your students (no matter which house you pick, they all kind of hang out), then blowing it all up with a five-year time skip roughly halfway in. The story wildly varies depending on which house you sided with at the start, but for the most part, despite a few hand-waved events (and a few exposition-based cutscenes that mostly focus on a map), it does deliver and even provides an epilogue for party members.

To accomplish all this carnage you’ll stomp around in two locations: free-roaming the hub academy to hone your skills, impart knowledge on your party, and socialize, and the grid-based battlefield, home to SRPG combat (with permadeath and a hard mode off the bat, if you wish). Socializing is really one of the big focuses, and I found myself resonating with a few characters in particular. Hilariously, I even regretted my first house choice (Black Eagles) because a few of its members openly scorned me after learning that I was to become their professor.

Most of the game’s RPG systems are facilitated through menus, with a calendar that dictates when and what actions you can take (roam the monastery, rest, hold a seminar, battle, things of that nature). You have your own room, there are “days off” where nothing in particular is happening, and activities like fishing or (automatic) gladiatorial combat to partake in.

All of the RPG elements are very much in your face. Few modern forays into the genre deal with schools, salaries (I’m getting warm flashbacks for Final Fantasy VIII), and examinations for new class archetypes. It’s all-encompassing and Intelligent Systems really commits. Some of it is fluff, baked into the backbone of classic RPG bookkeeping, but I love it all the same.

Much of my love is for Three Houses‘ personalities. I adored watching  Bernadetta grow out of her shell, Caspar gain confidence, and Hubert become…slightly less of a condescending asshole. Certain kinds of gifts (lost items) provide hints for which cast member they belong to, and if you pay attention to their conversations (and thus their likes and dislikes), it’s easy to match them up. You might learn, for instance, that Ferdinand is a tea fiend. Remembering that will make a few future sidequests or gift-giving that much easier. Of course, you could do none of that if it isn’t your thing, and forgo small bonuses and support links/conversations.

Not every mechanic is a winner. There’s a lot of basic “yes or no” responses to requests, and rather cold “buy flowers” prompts for birthdays on the calendar until you get the (stressful!) on-demand birthday tea party option (this game puts a huge focus on tea if you couldn’t already tell). The mostly (outside of battle cries) silent protagonist thing is fine, as there’s already a ton of spoken dialogue and two gender options, but a Mass Effect Shepard style emotive avatar would have been an interesting approach. Either way, there’s joy in interacting with your students: after witnessing the combat fruits of my labor following an intense class session, I immediately thought of Mushu sending Mulan off to battle after her training. Yes, there’s battling in this tea-drinking dating simulator.

It takes a bit to ramp up. Initial skirmishes are light on tactics, mostly selling you on the idea of weapon durability (which is directly linked to ability costs) and unit placement. From there you’ll graduate to class nuance: things like learning the range of abilities, which units are weak to what type of element or mechanic, and counter tech (some powers allow you to strike without the chance of a counter, sometimes you want to be countered so you can counter-counter). I found myself visibly grinning at the idea of building up a party, fine-tuning it through tutoring, and meshing my perfect class composition together.

It almost always worked out, and that’s because Three Houses gives you a ton of freedom in terms of how you want to build your party. Class graduation swaps are transparent, easy to strive for, and even easier to take back if you feel like you made a mistake. Mistakes, mind, that are less punishing given the limited “Divine Pulse” (read: rewind turns) mechanic that’s intertwined with the story.

There’s something to be said about an SRPG that feels like you have unfinished business after the credits roll. Over the course of this lengthy review session (my playthrough was roughly 40 hours), I started a new game (NG+ is in, with some professor-based stats/items carrying over) with another house just to fraternize with new people and see how the narrative changed: a rarity for a demanding RPG. Much to my surprise, quite a bit of it was different, particularly during the time-jump portion, which featured a wildly divergent ending.

I cannot stress enough how much Fire Emblem: Three Houses exemplifies the “RPG” part of the acronym “SRPG.” While strategy is indubitably a large part of Fire Emblem‘s DNA, the vast majority of my enjoyment was found having lunch with classmates and getting to know them better, or doing errands while running around the lovely academy grounds. This is a world you can absolutely lose yourself to for months on end, but if you find menus tedious, you might be reticent to the modern relationship-heavy Fire Emblem formula that’s cemented in Three Houses.