Up to my knuckles in justice

Up until very recently, eyewitness testimony was the single most persuasive form of testimony a jury could hear. If someone could stand up in court, jab their accusing little finger at a suspect and say they definitely (well, almost definitely, pretty sure, probably) saw them do the crime, it was curtains for the defendant. Despite being incredibly convincing, it’s also been proven to be one of the least accurate forms of testimony.

Countless men and women have done serious time or, even more tragically, been doomed to the electric chair on the basis of shoddy, inaccurate descriptions of what someone may or may not have seen. It’s why advocacy groups like The Innocence Project exist, exonerating wrongly convicted criminals with DNA evidence that irrefutably proves someone else did the crime. Deciding the fate of a person’s life on the testimony on a single fallible witness is irresponsible, reckless, and grossly unjust. 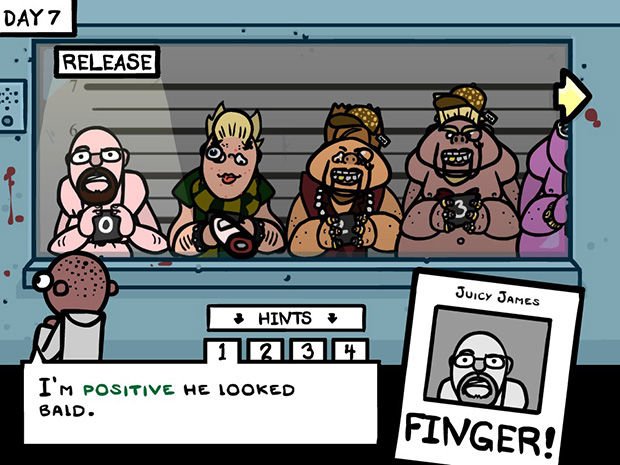 You start with a line-up of scumbags and shady characters. They all look guilty of something. Look at them, shuffling nervously under a flickering light, holding tiny number cards in front of them like flimsy shields. Who could it be? You can practically smell the flop sweat, the fear.

You go over the witness’s clues again confirming the most important facts, what they know they know. The suspect is definitely a heavyset man, so you can let the skinny-boys go. He was probably wearing something hippy-ish (what counts as a hippy these days? Does the witness mean “hipster?”) He’s maaaybe kind of a jock? (a fat hippy jock? The hell does that look like?)

You do your best to ignore the “um’s” and “er’s” of indecision, the inherent haziness of memory. It’s only a man’s life on the line. NBD, right? Try to knock this out before lunch, it’s nachos and wings in the cafeteria today — finger food.

One by one you winnow it down, until there’s just two suspects left. They both fit the profile, they’re both so similar. But there is at least one big difference between them, one is going to go home while the other will never breath free air again. Which one is up to you. Pick one. Damn one. FINGER one. 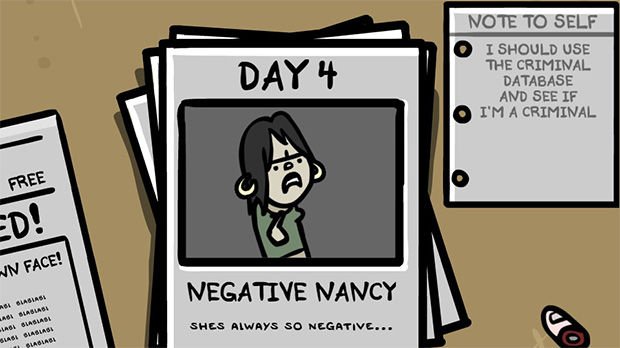 You get one freebie in Fingered. Sending a single innocent man to the chair will be swept under the rug, but fry up a second one and it’s time to turn over your badge and finger gun. This is the likely outcome for most games of Fingered, there are 21 randomized cases to close (the suspects and clues are different each time out) and its so easy to finger the wrong guy. Especially since each witness throws their own curve ball into the mix.

Negative Nancy describes everything in loopy double-negatives to trip you up. Bigot Barney has some obvious prejudices you should probably factor in before taking his testimony at face value. And forget about the non-human witnesses, those guys just don’t get it at all.

After about the tenth criminal, your job gets significantly harder. The witnesses clues get more confusing while external pressures like time-limits and vision obscuring accidents hinder your investigative efforts. The line-up of bizarre, procedurally generated suspects grows longer and stranger. It will take a sharp, quick eye to spot out the telltale details to make your case.

It wouldn’t be a game by Edmund McMillen if he didn’t slide in a few cheeky references to some of his other games. Eagle eyed detectives will spot the occasional guest star or celebrity cameo in the line-up ranging from Meat Boy himself, to other more vilified characters like Charles Manson and Phil Fish. Always a pleasure to finger a familiar face. 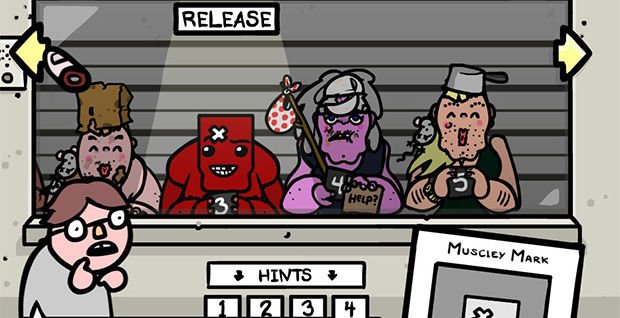 It would be easy to write Fingered off as weird for the sake of weird. It has a bizarre premise and is presented with the kind of perpetually adolescent gross-out art style of a lot of McMillen’s games. It’s scored with positively hypnotic jazz and narrated by a guy who sounds like the protagonist of Dragnet strung out on painkillers. It IS weird.

But, it’s also darkly subversive. A gallows humor take on a kind of justice that really did imprison and execute a lot of innocent people based on dubious descriptions and contrived conjecture. It’s not belabored, but there is a bit of a message behind the poop jokes and easy double entendres.

It’s smarter than you might think at first glance. The randomized criminals and clues combined with the idiosyncrasies of the various witnesses can result in some tricky logic puzzles, line-ups that will leave you stumped. But it never seems unfair. Despite the randomized nature of the game, the perp always seems obvious in retrospect and it never feels like the game is cheating (except possibly the last witness, but it’s a joke I won’t spoil).

Fingered is a pinky-sized bit of fun. It’s not hard to get everything you need from the game in a single night of sleuthing, but at the bargain price of $1.87, it feels worth it. A wonderfully weird, smart little game for less than the price of a cup of coffee: you could call it steal or five-fingered discount if that kind of wordplay tickled you.

Really though, in all sincerity, I think you should get Fingered.