I’m not even going to try to summarize the monumental impact Final Fantasy VII has had on countless lives, the JRPG genre and gaming as a whole.

So let’s talk about the remake. 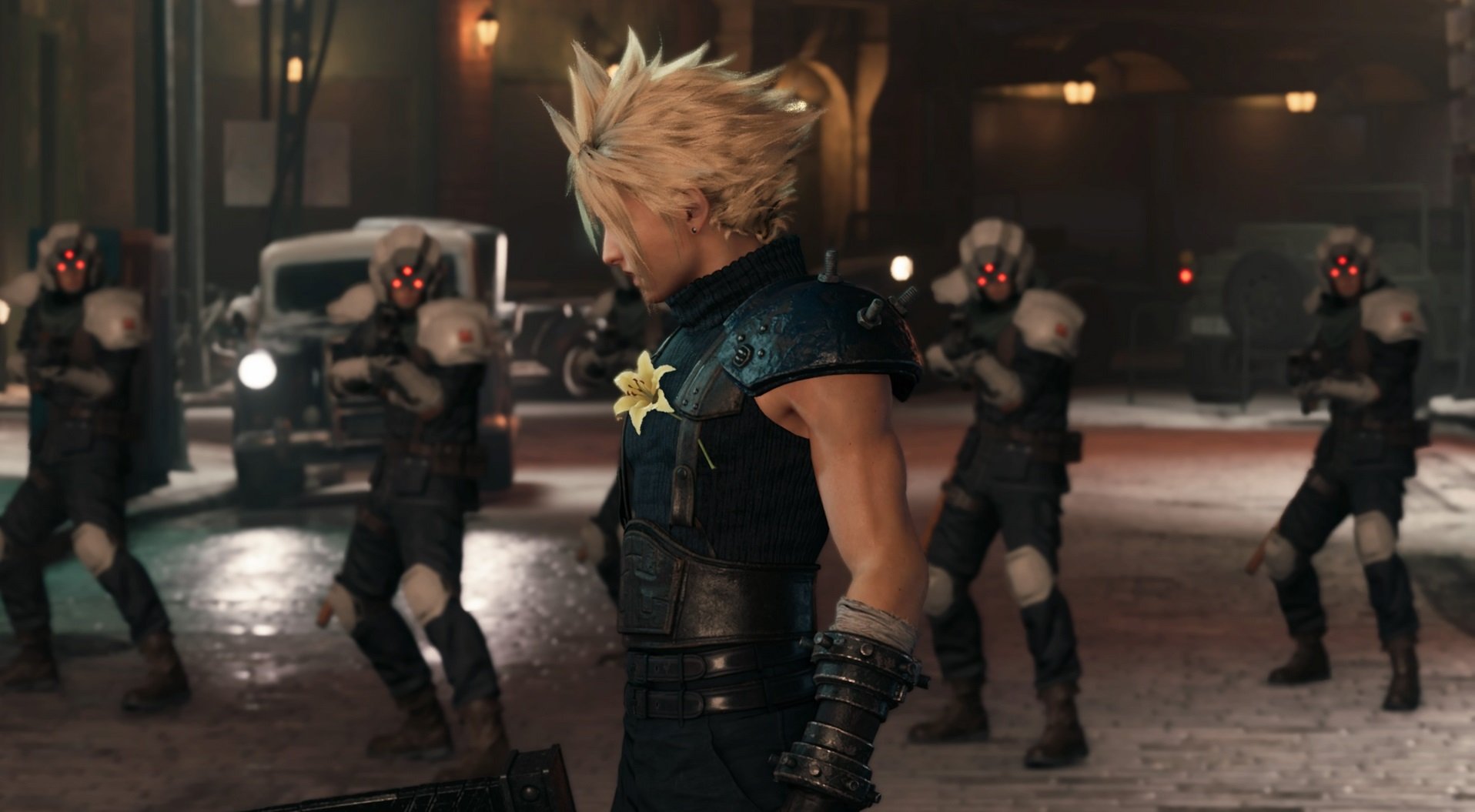 I’m just kidding, I’m not going to pass up the opportunity to wax poetic about the landscape of JRPGs in 1997. I promise it’ll be brief!

Like Chrono Trigger before it, VII was a gateway into the enchanting land of role-playing games for a lot of folks. I vividly recall passing around Final Fantasy VII‘s three original PlayStation discs in school: regaling classmates of what I had just experienced, and what was to come. It wasn’t just a game, it was an experience. I think for a lot of people, Final Fantasy VII Remake is going to have that same impact.

I know what you’re thinking, but this isn’t really about nostalgia: the remake is a straight-up good RPG that builds off a great foundational story. There’s a lot that’s changed, and it’s safe to say this is one of the most comprehensive remakes ever created. Previously throwaway characters now have motivations and personality thanks to modern technological advancements and a bit of creative storytelling. There’s brand new cast members, several of which slot right in naturally and a few that are clear sequel-bait.

But really, it’s the atmosphere of Midgar that wins out as the true pivotal character of the remake. Seeing kids frolicking in the playground in the intro that was once barren in the original PlayStation entry gives us new context for the city and the class-based politics that define it. Midgar, which has been ingrained in popular culture for several decades, is more alive than it’s ever been. Aerith (Aeris) is perhaps the remake’s biggest direct triumph, as she gets more of a chance to shine beyond her duty as a healbot that only had a place in select parties. Plus, she made me laugh out loud on more than one occasion with her zingers, which is always a plus. If this was my first time ever experiencing the FFVII story, I’d still be enamored by these characters.

A lot is also cleaned-up with the new coat of remake paint. Cloud’s freakouts are a little more grounded and less goofy looking. Even rando NPCs speak, and sidequests, for the most part, are fun to complete: especially when coupled with an automatic teleport turn-in system. The grunt workers of Shinra are more humanized and less cartoonish, though the latter qualifier still applies for several of the main mustache-twirling higher-ups. The new score also does a great job of channeling the original soundtrack while maintaining its own feel: especially those killer jazz track remakes. Like the remake plot changes, some are better than the source material, some aren’t.

Actually, a lot of it (especially the injection of Sephiroth as seen in the game’s trailers) is going to be controversial for purists, but newcomers generally won’t care and I don’t either; outside of some issues with a very weird (Nomuraaaaaaa!) last act. In terms of technical problems, I encountered very little: light audio issues for 10 minutes (a muted dialogue track) that worked after restart, and a few pathing issues that cleared up after several seconds.

Naturally everyone will want to partake, not just veterans. For newcomers, Final Fantasy VII Remake pulls out all the stops for making everyone feel comfortable. There’s an easy and normal difficulty setting available right off the bat, with a third “classic” mode that serves as easy-adjacent, allowing characters to attack and defend automatically, while you simply perform commands like a JRPG. If you find yourself in hot water while fighting a specific boss, you can swap your setting without penalty.

The chapter-based setup is also extremely digestible, which is going to be give and take if you’re expecting a sprawling, open world complex RPG (more on that in a moment). After a guided intro (Remake begins just like the original, with the initial bombing run from the demo), the slums of Midgar (where Tifa’s bar is located) becomes your home hub. That hub is like a giant wheel with spokes, which lead to sidequests and stores to buy stuff from.

The end result is more of a hangout Shenmue feel and I’m all for it. The gist is that you’ll do a bunch of stuff in a hub, then go to the critical path objective to select a “get to the mission” dialogue option, do a linear story-based section (or two, or three), then return to a hub. I repeat: this is not an open world game. There’s a ton of walking involved, a lot of which is cinematic in nature. Since a lot of you are dying to know: there are no QTEs. 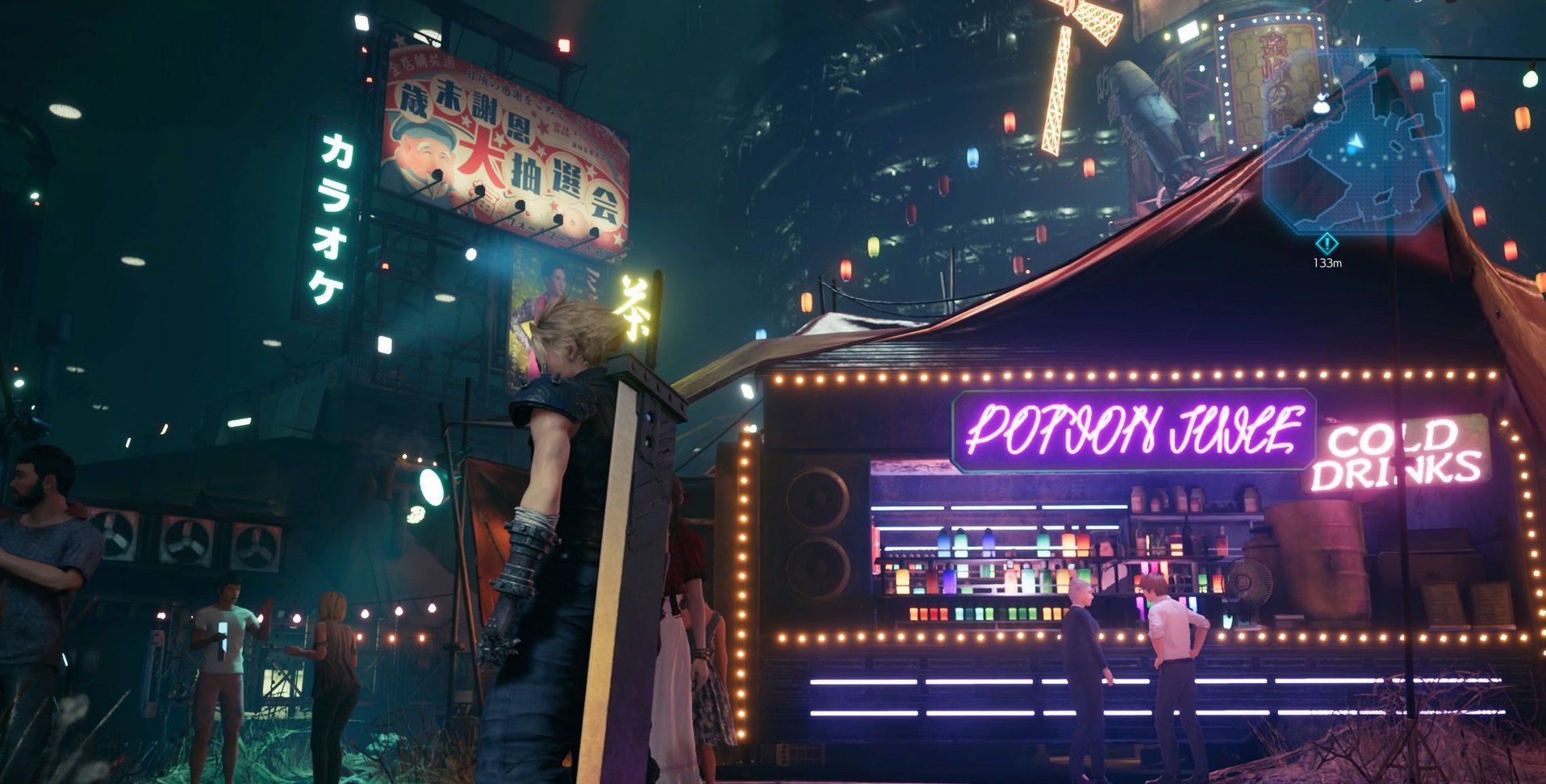 Near the end (Chapter 14 of 18) the game starts to open up more, with fast-travel available for that particular hub: then the Remake transitions into a guided narrative tour for the rest of the experience. While future episodes (we’ll get to all that later) could stand to be a little more open, especially with a, you know, open world, it fits this portion of the narrative as Midgar to an extent was always like this.

Another obvious change is combat, which is kind of like a more restrained and refined version of FFXV (or an evolution of another recent Nomura project). Remember when I said that each character had more of a chance to shine earlier? The new combat system also facilitates that. Cloud and Tifa are the close-ranged king and queen, with Barret fulfilling a ranged damage role and Aeris as the spellcaster. Tifa is arguably the most interesting party member, sporting a fighting game-like skillset with launchers and abilities that combo off of each other.

Combat is like a mix of an action game and a traditional JRPG. You can move around, dodge and defend at will, then queue up a menu of commands (like magic, items, or abilities) that essentially stops (drastically slows) time. It’s not the most tactical or difficult RPG combat system to master, but there’s a lot to like. Forcing players to expend ATB bars (which is built up over time by attacking or taking damage) to use abilities, spells or items is a smart move. It prevents you from spamming potions or cure spells, putting the pressure on you to act wisely and make every choice count in some of the more complex battles.

Most “trash” (fodder enemy) fights aren’t super interesting, but fun to play and watch. Bosses on the other hand put all of the systems to the test, as you need to actually try to follow the weakness and stagger parameters or you’re going to be guzzling potions and dipping into your savings to replace them. That said, even with all that in mind, it wasn’t until Chapter 12 that I hit a game over screen. Late-game simulators that disallow items (or force you into a higher difficulty) provide more of a challenge, but that isn’t available from the start. 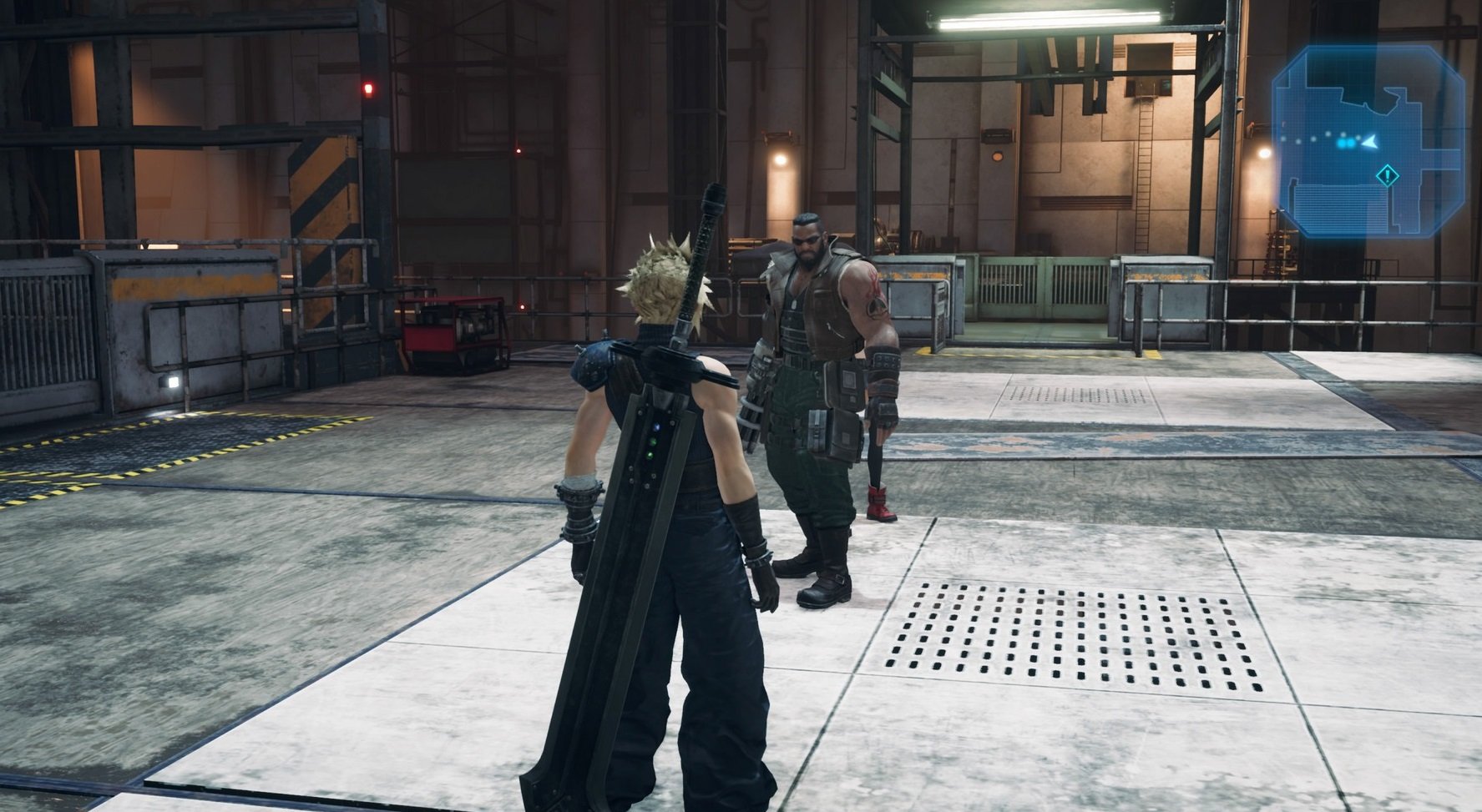 Part of the reason I had a smooth experience is because I spend an exorbitant amount of time in menus, building my characters. In Remake, you spend SP (earned through battles) to upgrade your weapons and AP (also from battles) to level-up materia. The former foundation is predicated on “buying” new stat increases or passive powers through a skill tree (more of a skill solar system, really) and the latter allows you to get creative in assigning roles to characters by slotting in different pieces of materia.

Trying to figure out the best possible builds for each party member was a lot of fun. I decided early on that Cloud was responsible for “fire and ice,” while Barret focused on tanking with damage-drawing support materia and a penchant for lightning to boot. Tifa was my thief with her steal materia always equipped and held up the rest of the elemental bargain with air and ice magic. Every player is likely going to try something different that works for them: that’s how effective the materia system is even decades later.

Even if the combat system isn’t getting you going, a lot of the emotional narrative appeal of the remake spills through to the combat. Hearing Barret shout the victory fanfare theme song as you rush from fight to fight is enough to make you smile. The key here is that like pretty much everything Nomura does, it looks absolutely fantastic at all times and errs on the side of emotion. Watching Cloud lean back as the slow-motion effect pops up and slam a soldier down with a Braver slash is stylish as hell.

Well, the time has come: at some point we need to talk about the nature of the remake’s delivery system. Although this game is technically called Final Fantasy VII Remake, it should probably have the subtitle “Part One.” This actually does feel like a “full release,” but it is only part of the story, with many loose threads hanging by the end.  For reference, my first run of the game took roughly 35 hours. That was with doing every sidequest possible and exploring every nook and cranny of the map (to my knowledge), as well as maxing out all magic (green) materia. There’s a few minigames sprinkled in too, but it’s easy to dry that well up as the rewards aren’t that hard to earn outside of the late-game VR training missions that are meant to test your mettle. I squeezed in another five hours and nearly reached a 100% completion rating. 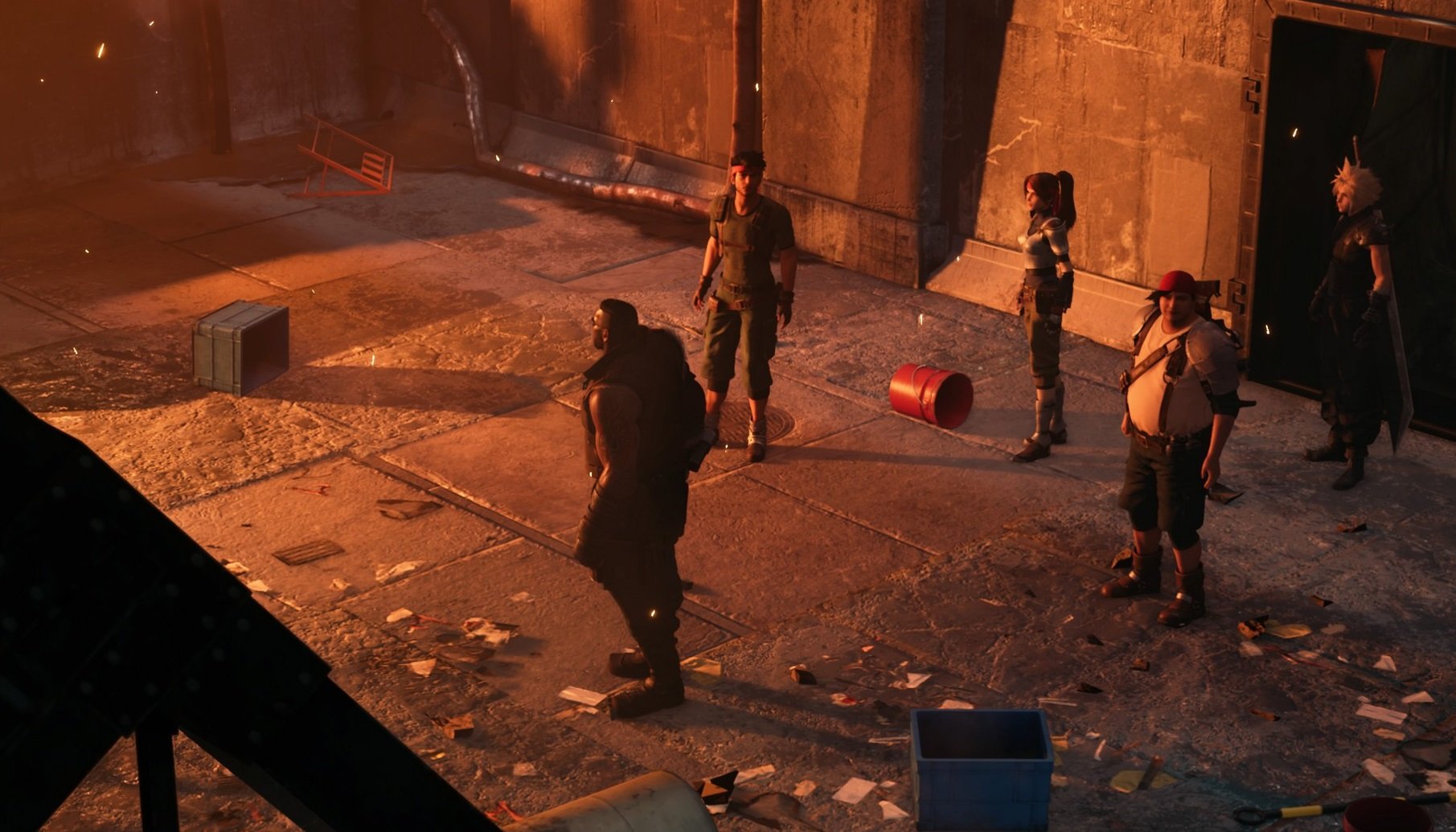 Like the story’s hanging threads, there is a “to be continued” feel with a few mechanical concepts too. An endless variety of materia and equipment builds aren’t quite a thing yet. Red XIII, a fan-favorite, is a “guest” character and not a party member…yet. It’s almost all the way there in just about every respect, but stops short on a few accounts. Now I’m willing to wait for the follow-ups, but it was still worth it to play this remake — first part or not —now.

I kind of agonized over rating Final Fantasy VII Remake. It’s going to garner a lot of discussion from people who are both blown away by the new treatment and disappointed by it, and those feelings are not mutually exclusive. In the end — after thinking on it for some time and removing nostalgia from the equation entirely — I came to the conclusion that this world is full of powerful characters and a setting that’s worth remembering: remake or not.