Fate of the World is simultaneously one of the more interesting and inaccessible games of recent times. One might say it’s not even much of a game at all. What it most definitely is, however, is a very complex global policy simulator in which your task is to save the world from environmental collapse.

Make no mistake, this is a climate change sim that doesn’t care about you if you believe right-wing media propaganda that tries to stall global environmental policy change by spreading lies and rumors. But in a way, perhaps it should have. 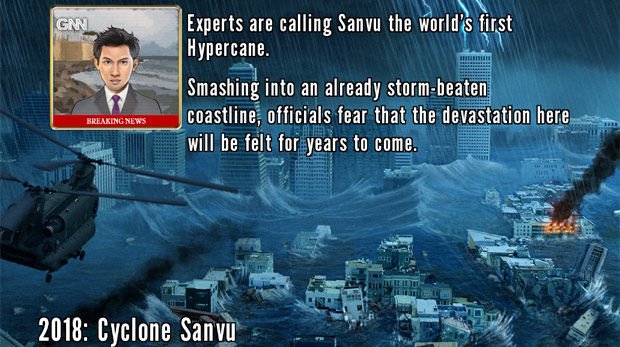 Let me get this out of the way first. I don’t care how you feel about climate change or if you believe mankind’s industrialized efforts have had an effect on it or not. This is just a game and if you feel that strongly about it, I’m sure you can find like-minded people somewhere who will listen.

Having said that, Fate of the World is clearly meant for a specific audience. To say that it’s a game for “liberal” (in the contemporary U.S. usage of the word) and well-educated people wouldn’t even cut it. You basically need to have a very broad body of knowledge about how food production, economies, technological advances and public backlash are all interwoven before you can start to make heads or tails of how to advance in the game.

The game uses real-world data gathered across many years of research (you can just assume it’s the right and non-corporate sponsored kind), a scientific model from Oxford University’s climate researcher Dr. Myles Allen, and many other researchers helped in creating it. So in a way, it lets you play with a model of our world’s future.

The gameplay is actually pretty simple. As president of the newly formed Global Environmental Organization (GEO), with more power than the UN has ever had, you play policy cards for every agent you’ve recruited in a region. Some cards cost you a set amount of money per turn (each turn is five years) and some cards improve or build something within one turn. The agents that implement policy cards also cost you money to recruit. 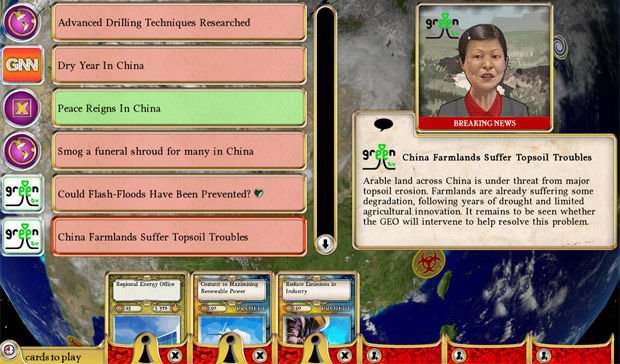 Your income is based on the GDP of a region, which in turn is tied to its economic development. If you ignore a region’s economy or let global energy and resource generation plummet as a result of your mismanagement, so too does your income wither until you become as effective as Zimbabwe’s government.

Whether you can effectively manage a region is also tied to the region’s political stability and how much it likes the GEO. Popular programs that increase a region’s Human Development Index (HDI) — like educational programs or medical treatment — or environmental impact policies that provide drought and wildfire protection can help to increase the GEO’s popularity.

As a result, you have to micromanage both the political stability with regard to food supplies and economic growth, as well as regional HDI, to even begin to make changes to combat global warming. And in most missions in the game, you’ll hit game over if the global temperature rises more than 3 degrees Celsius before the 22nd or 23rd century. Which it will, and very often.

It’s pretty fun to be required to think about all these factors and play around with policies until you find a mix that works over time, but unfortunately that’s just one aspect of the game. To combat global warming, you need to reduce toxicity and most importantly emissions from agriculture, industry, commerce, transport, and energy production. 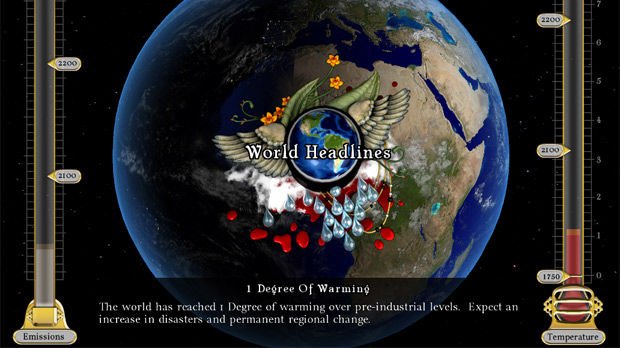 This is where it starts falling apart in the “fun” department. To reduce emissions, you have a wide variety of policy cards to choose from. Reducing reliance on fossil fuel and promoting investment in renewable energy helps, but it’s costly to do it on a global scale all at once. Nuclear energy has zero emissions, but at some point uranium production peaks and leaves your industry with severe energy shortages — resulting in a collapse of the global economy and thus, your income.

While it wouldn’t have been too bad if the game actually told you which policies affect what and how, it just doesn’t do that in an effective way at all. You’re required to click through a myriad of menus that show statistics and graphs for pretty much every impact factor you can think of. In a nutshell, the game expects you to be both smart and patient. And it’s the latter that becomes detrimental to the experience.

Let’s say China’s basic emissions graph tells you that the majority of emissions come from energy and industry. Getting into the detailed view for energy emissions may show you that 80% of energy output comes from coal. Reducing coal dependence and moving to renewables can work over time. But adapting renewables takes time, and the region may just switch to oil or gas in the meantime. Perhaps you like to research carbon capture technology and implement it instead. 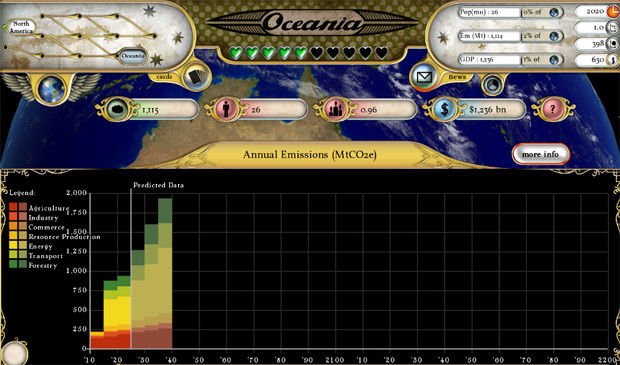 To see the effects of your policies, you have to keep clicking through menus to keep up with changes. While a general graph gives you some information about the rise or drop in emissions output, you can’t afford to rely on that alone. You have to get into the details to micromanage everything in order to survive.

But this is just energy emissions we’re talking about. For industry, there are statistics for its energy and resource dependencies as well as effects on the GDP and various other factors. So you could recruit another agent to play one more card per turn and, say, invest in biofuels. As we know, biofuels comes at a cost of food production. But there is no feedback on how much it impacts agricultural production unless you keep checking the statistics every turn, or until a region suddenly has a famine and a war breaks out.

Plus the cost of playing these cards to reduce emissions in developing regions means you can’t invest in societal and technological policies as much in that region, or in other regions, as you just have one pool of income to draw from.

Now try to imagine managing all these factors for one region, and multiply them twelvefold for global management. Does that sound fun? 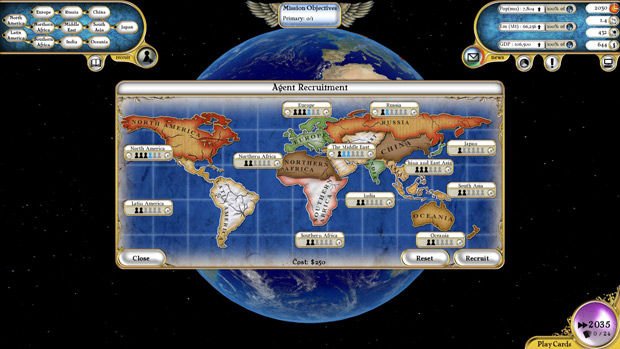 As strange as it may sound, it is pretty fun. To a point, that is. Fate of the World has that “one more turn” addictiveness factor that Civilization has, and because it tries to make you feel dumb you’re only reinforced to learn how to properly play it. Which is another way in which the game fails.

The game just does not inform you well enough about ways to impact change effectively. You’re not encouraged to go and find out how global policy at the macro level works. You’re forced to. The tutorial only tells you the basics of the policy card and agent recruitment processes, and you’re simply left to your own devices.

As such, it makes you wonder what the game’s audience is. The tone is unapologetically one that can primarily be found among European Green parties, even though some missions allow you to play as the evil industrialist. Most of the missions require you to combat temperature rise, however, and to do so you need to either learn the interwoven elements that affect global policy, or you need to know them already.

Fate of the World should have had a large set of feedback implementations that tell you exactly what you need to know. It’s OK to not tell us every single thing, but don’t expect your players to go out and find those details by traversing ten menus per region, every single turn. 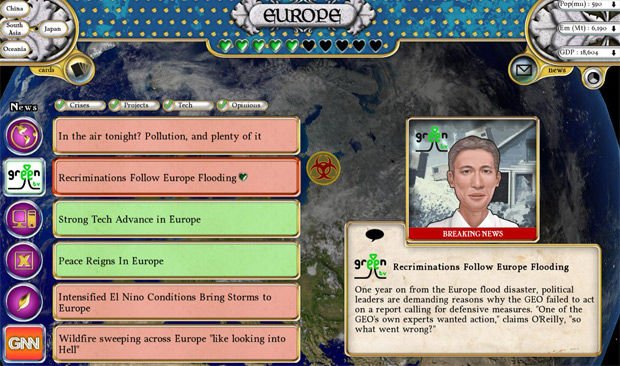 The game does provide some feedback in the form of news reports, but it doesn’t recommend what kind of policies would be most effective to combat negative effects. There is an option to only show “popular” cards to play, but we all know that the popular policy is far from the most effective one. Even having some simple advisers like Sim City has had for a decade would’ve helped a lot.

It’s a shame, really, because if the game would’ve been better as a game then it may have reached a wider audience. The game’s tone will only antagonize “skeptics” instead of engaging them to learn how emissions and global changes in weather patterns can affect both the environment and subsequent economic fallout.

As it stands, it’s a complex sim that will turn off all but those who either already — or those who are willing to — learn about what it tries to teach. It’s a classic serious game from an era that tries to fit educational design into a game structure, instead of one that focuses on being a game and uses game mechanics to engage people and learn as a result of being engaged.

But unless it’s supervised by a great teacher in a class, students are not likely to learn much before they give up on treading through hours and hours of menus. It will also convince as many partisan Republicans or Democrats as raising high-income taxes to fund social programs and universal healthcare will. The game simply preaches to the converted. 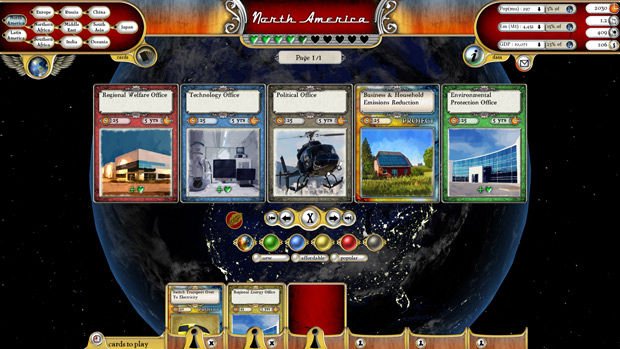 However, if you are among those players that the game seems tailored for, you will find a strangely satisfying experience. It challenges your insights into global affairs and lets you play around with policy to see for yourself how hard it is to steer the world away from catastrophe. And despite being not accessible enough to support the gameplay, it does turn a wildly inaccessible subject into something that becomes almost tangible over hours of playing it.

Because it’s a cheap game (on sale until April 29th, 2011) and because it’s an intelligent and largely replayable one, it’s still worth a look. It’s deeply flawed in terms of being an accessible game for the masses, which works against the game’s apparent intent to educate people about climate change; what’s the point in educating the educated?

It completely misses its educational goal because of it’s design, but remains an intriguing title for those that might feel they are smart enough to tackle the challenge Fate of the World throws at them. As such, I still recommend it if you are up for a challenge. But whatever you do, don’t expect the job of saving the world to be an easy one.