Look, this game is super fast racing and includes a big blue vehicle named “Fulcon Capital.” You can stop asking for these guys to make the next F-Zero game. This is it. 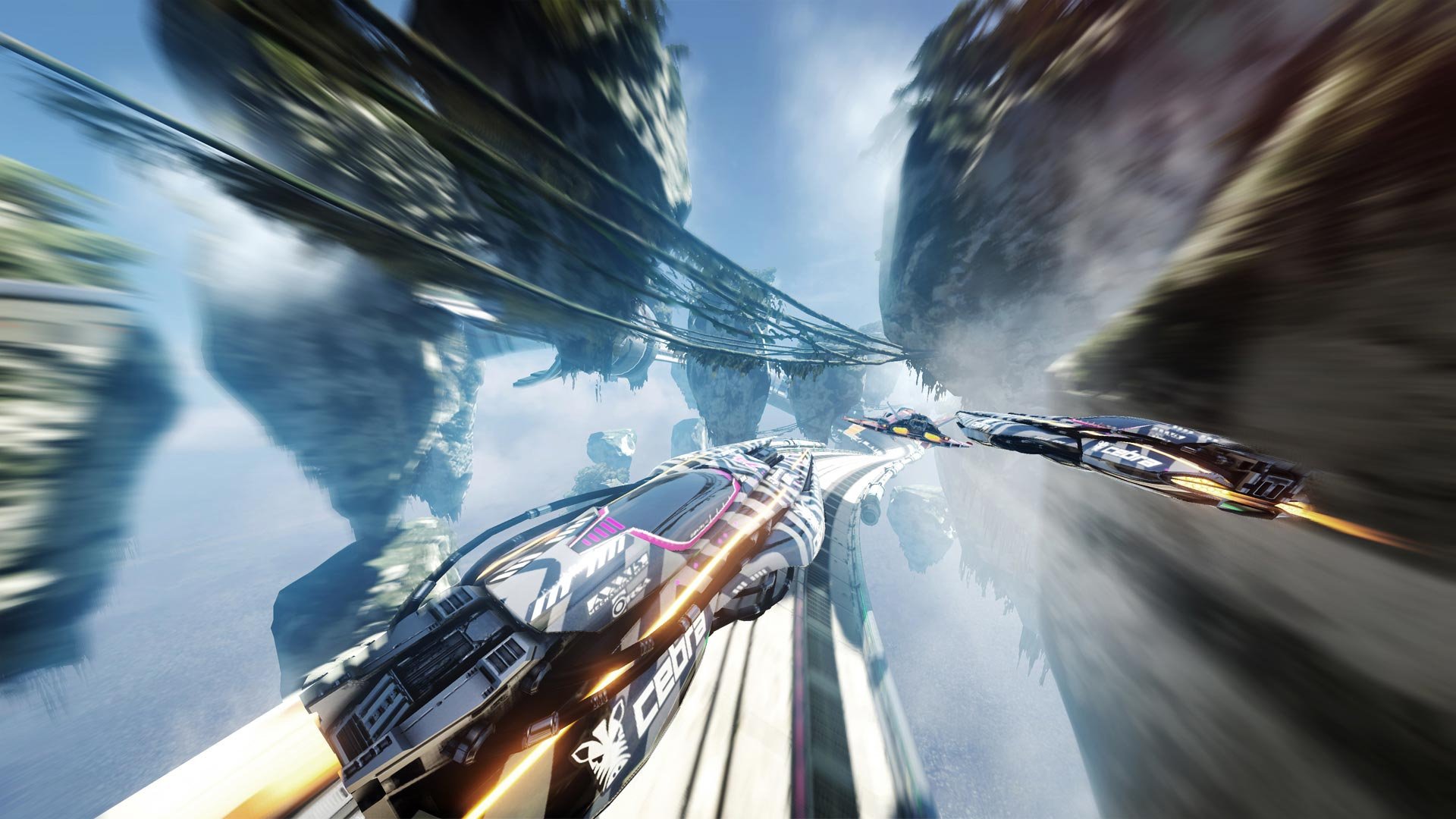 Fast RMX contains ten racing cups of three races each and fifteen vehicles. It’s got split-screen multiplayer, local multi-Switch multiplayer, and online play. The cups can be played in three difficulty modes, and individual races can be performed in Hero Mode which adds additional challenges. No matter what you may think of the racing genre or this title in particular, this game is an absolute steal considering the asking price.

Racing can be boiled down to two things: feel (admittedly abstract) and tracks. Fast RMX absolutely nails the former. This game feels exhilarating to play. At first I loathed the lack of a rear-view button or camera, but then I realized how exciting the last stretch of each race was. Was someone about to blow by me? Will my remaining boost be enough to hold my position? Yes, there is a mini-map in the corner that shows everyone’s positions in the race as little dots, but in my experience too much is happening at any given time to meaningfully glance at it.

The main gameplay hook revolves around boost-refilling orbs and the colored strips of track littered around each course. These are either blue or orange, and the player must alternate their color with a press of a button. If the player’s car matches the color of the strip, it acts as a boost strip. If the opposite is true, then it slows the player down until they either get off the strip or change color. There are also colored jump pads, and missing most of those results in falling off the level and being destroyed.

Some jumps, however, are completely optional. Being airborne tends to be slower, but taking these jumps can lead to alternate routes or extra boost orbs. The amount of choice present in certain courses is excellent. It isn’t a case of “if you know you can go through the waterfall, you have the advantage.” Instead, there is almost always a cost-benefit analysis. Taking the optional jumps is slower overall, but can grant full boost by the time the vehicle lands. It may be a good idea to move over towards that orange boost, but doing so might be dangerous or not worth it given how much boost is banked.

These decisions keep the player thinking and constantly weighing advantages and disadvantages all while racing at breakneck speeds. It’s also important to keep in mind the car itself since they all have varying weights in three different stats: acceleration, top speed, and boost. For cars with a high boost speed, it is most certainly worth it to be risky and go for as many boost orbs as possible. This isn’t immediately obvious to new players, though. I wouldn’t be surprised if some get turned off by the difficulty (even on the first tier) and give up. 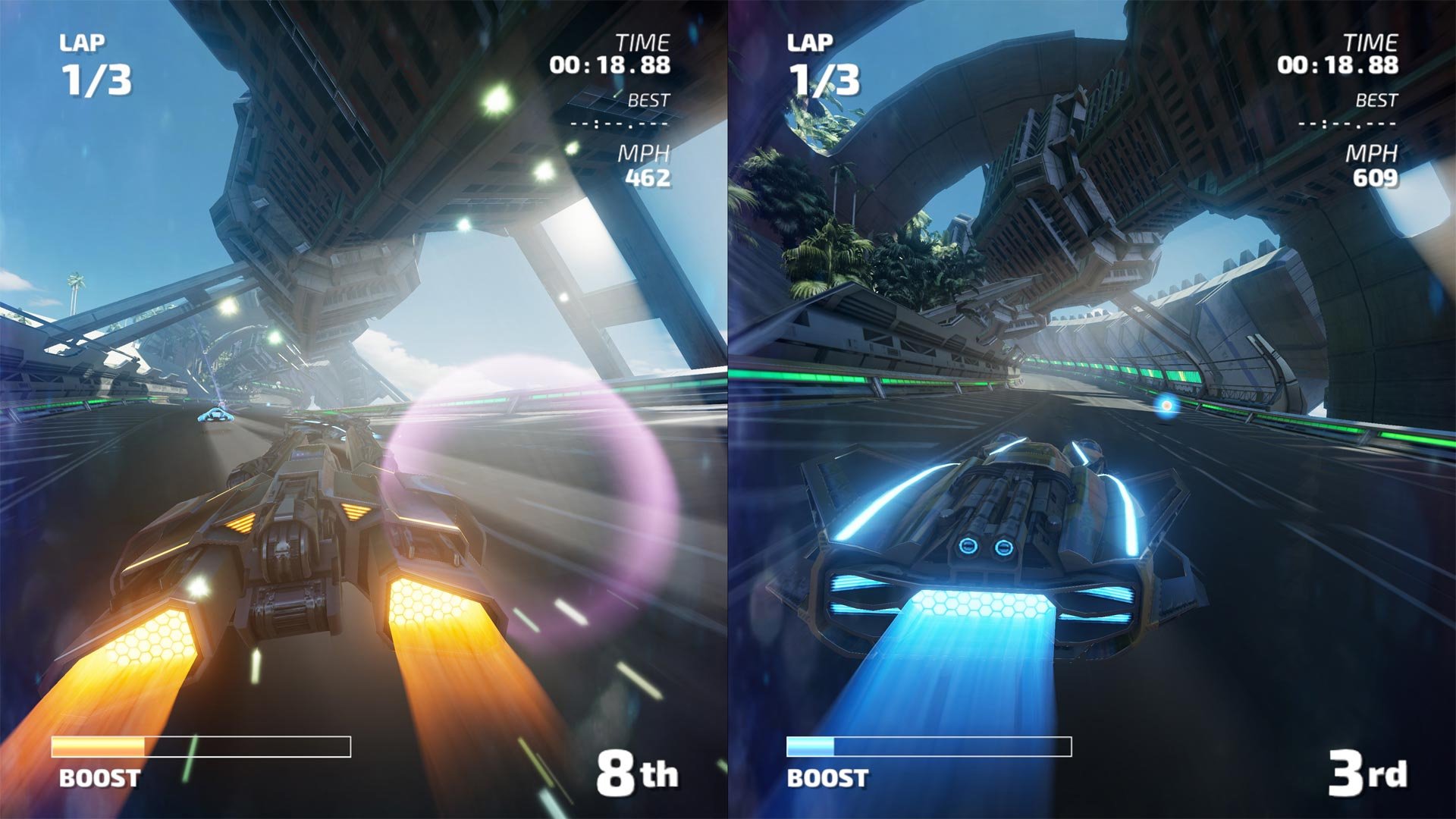 The tracks themselves look fantastic. Well, everything does, really. Different levels employ different weather effects and even mechanics. For example, one has UFOs with orange and blue beams streaming down onto the level. Matching the color and entering a beam acts as a slow-rising jump and it so dang cool. Many levels share a theme (jungle, desert, icey, etc.) but they don’t feel too similar. Some also have stage hazards that emerge on the second and third laps, making it less monotonous while racing.

Success tends to depend on track memorization. It’s not dissimilar from, say, competitive first-person shooters in that regard. Someone who knows the map will instantly be better than someone who does not. It can be frustrating when playing online, as other (read: better) players move ahead and stay ahead forever, but it’s also good incentive to pay attention and replay levels. Rather than just racing and hoping for the best, replaying a level provides a chance to plan out the best routes (which often depends on vehicle choice) and try out different ideas.

As for online play, it’s a bit inconsistent. I haven’t had any split-second finishes, so it’s hard to tell how much lag compensation there is. I can say that driving next to another player does not look smooth. When they weren’t leaving me in their dust, other players looked jittery and jumpy. It’s also impossible to play with anyone in particular — the game simply dumps you into a lobby with players and you’re off. This is a feature planned for a future patch, but it is currently unavailable. 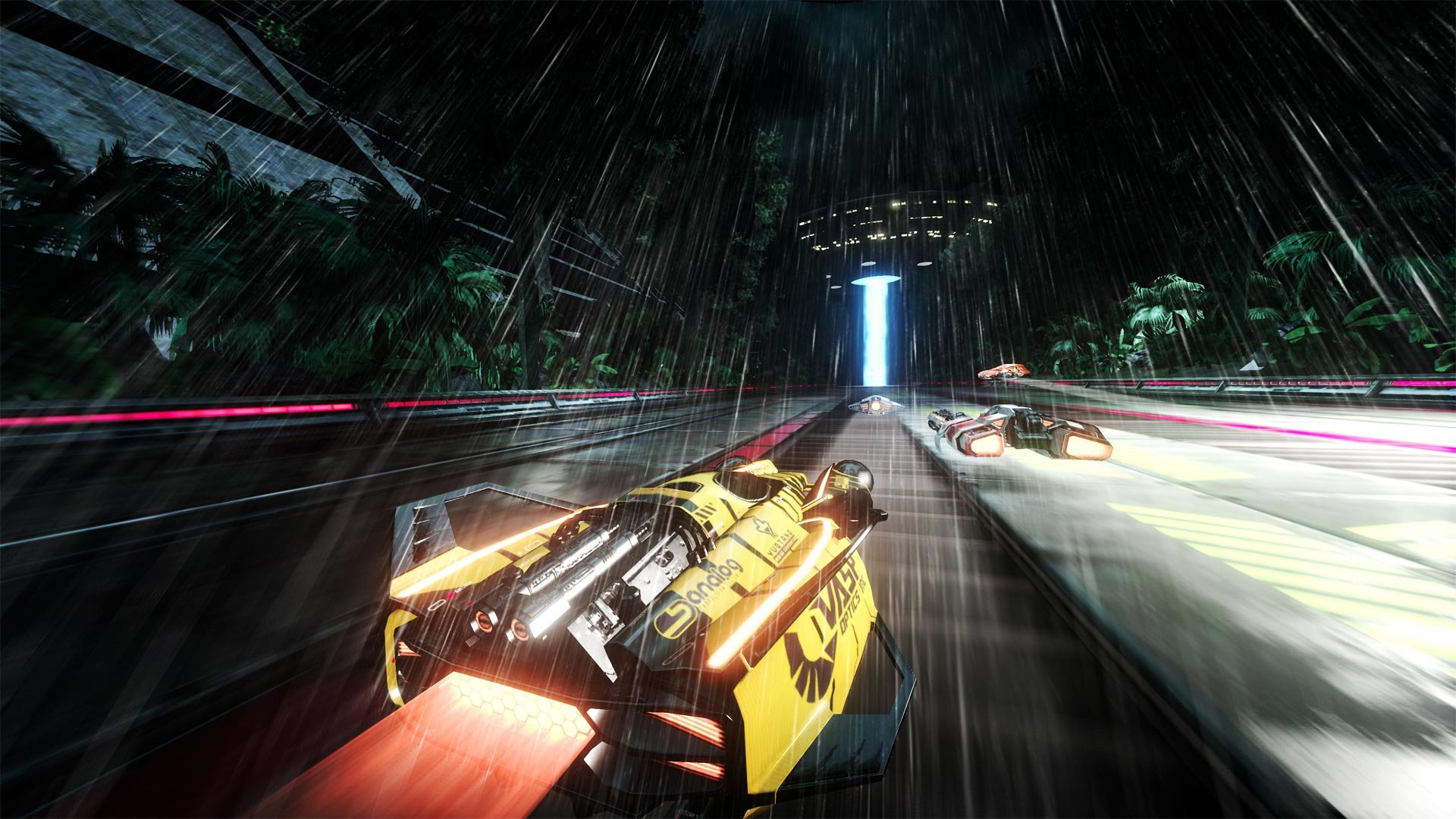 Hero Mode forces players to come in first as well as turning the boost gauge into a shared “boost/shield” gauge. Having nothing in the gauge will cause a crash on impact, which forces a loss. It makes the game much more resource intensive and certainly requires a lot more focus and planning than normal. Turns out I’m not a hero.

Fast RMX continued to grow on me the more I played it. While the lack of online features is a bit of a downer, the sheer amount of things to do is well worth the small asking price. The track layouts give the players freedom and force some serious critical thinking, which I can’t say I’ve encountered much in the genre. It can be frustrating when first starting out due to the difficulty and reliance on track memorization, but I encourage you to stick with it and challenge yourself to learn the tracks and rise through the ranks!