I’ll come right out with it: Vaas: Insanity is so much better than I feared it might be.

Not that I rolled into the first of Far Cry 6‘s three DLC packs with many expectations either way, but there’s actually something pretty engaging and even exciting here despite whatever lingering burnout I still have from the main game. The whole premise for the season pass is to bring back past villains as playable characters in a new-to-the-series roguelite format — which, at worst, could be pandering (in the story department) and fail to click with Far Cry fans (in terms of the usual hooks that keep people coming back).

I’m super curious how things will go with Pagan Min (Far Cry 4) and Joseph Seed (Far Cry 5) in the driver’s seat, but for now, with this first DLC, I can confidently say that Vaas Montenegro (Far Cry 3) fits this “greatest hits” meets “recurring nightmare” structure. I think my biggest surprise early on was that after feeling unstoppable in the main Far Cry 6 campaign (due in part to absent-minded AI), it was nice to have cautious open-world exploration with combat that is legitimately threatening again. It’s like the old days!

Of course, given the nature of roguelites and permanent character upgrades that carry from run to run, Vaas’ power will inevitably outpace his fever-dream enemies. You can slowly but surely save enough cash to boost him up and shred foes. But early on, with a crappy pistol and hardly any HP (or healing syringes), any random shootout can be deadly.

On the flip side, if you’re wary of the threat of losing progress, I don’t think Vaas: Insanity goes overboard. It took me a few failed attempts before I secured my first clear on the lowest difficulty, and then I went back for the next tier up (carrying the same loadout I was rocking before) and won again. That first winning run lasted about an hour and a half, while the second win was closer to two hours — but I played it safe in both situations and did more or less all of the open-world content even though the majority of it is optional. 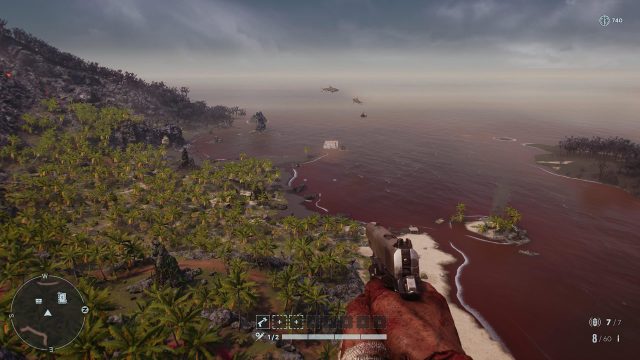 Starting off in a compound at the center of the map each time, Vaas has access to a weapon locker and a mirror (that can also be reached in three other safehouses scattered across the DLC’s very appropriately sized island), and these are where he’ll spend cash earned from slain enemies to buy better guns and unlock permanent upgrades like health, gadget slots, and the ability to hang onto his funds if he dies, among other perks.

The island in Vaas: Insanity is built for on-foot exploration, which evokes this sort of early Far Cry 1 meets Far Cry 3 vibe. The scenery and characters (and a bit of lore) come from the latter game, of course. But there’s something about the roguelite threat here that reminds me of playing FC1 and FC2 back in the day. I’m cherishing this feeling — it’s refreshing.

While there’s some exploration on your first couple of never-wracking runs, the DLC is definitely action-focused. You’ll gun down hundreds of nightmarish warriors, animals, and even multiple forms of Jason Brody (Far Cry 3‘s brotagonist), which is amusing. It’s nice to see the tables turned on an unhinged villain like Vaas and have him be pestered by a protagonist-turned-punk who won’t stop taunting him. Citra Talugmai (Far Cry 3 had multiple villains, remember?) also features heavily, though she’s much less fun.

Rather than worry about busywork, the bulk of the DLC’s discoverable locations boil down to combat challenges (where you face a group of enemies to unlock a certain category of weapon for that run like a shotgun, sniper rifle, or bow), puzzles (like a funhouse in the bloody ocean or a spooky hotel), and three “required” main-story areas (where you fight to get one-third of the Silver Dragon Blade so you can finish the run). The more content you engage with, the more money you’ll wrack up and the more prepared you’ll be for the final fight, which is a wave-based survival challenge that throws everything at you. Technically, if you had a strong setup — like an assault rifle with a scope, some extra defense and health perks, dynamite sticks, and several syringes for full-heals — you can just rush to the three required sites for the dagger pieces, skip the rest, and then return to your compound to initiate the final fight. It’s tough but doable if you time your heals right and top up your syringe supply with various chests around the base, and enemies constantly drop ammo when they die. The finale is structured with several “outs” so that you can win (but lose a bit of your pride) by exiting early — or you can push your luck and fight additional waves. The extra reward isn’t really worth it though, so don’t feel guilty.

That said, until you’ve gotten a feel for how to engage groups of enemies (who often warp in from all directions) without being melted, it’s easier said than done. Prior to that point, it pays to repeat most of the combat-oriented content on the map — you’ll get more powerful on that run, and earn money to stay powerful on future runs. Worth noting: once you explore the map in Vaas: Insanity, it’s explored; you’ll see the icons on future runs.

How bad is it if you die? Are you totally screwed? Initially, on the first few short-lived runs, kind of. But as soon as you’re flush enough to afford the bulky HP buffs, beating Vaas: Insanity is a lot more manageable. While it’s pretty straightforward to earn weapons and perks on any given run just by doing combat challenges and opening chests on the map, there’s also the aforementioned weapon locker — it can be upgraded so that you can immediately buy higher-tier weapons (and reroll their perks) at the start of a run. It’s a little too pricey, but if you focus on just a few types that fit your playstyle, it’s not bad.

I wasn’t able to test out online co-op, but that could be a blast here; potentially more so than the core Far Cry 6 experience. As it stands, in solo play, I found Vaas: Insanity to be challenging (until all of a sudden it wasn’t due to my upgrades), and it never frustrated me. 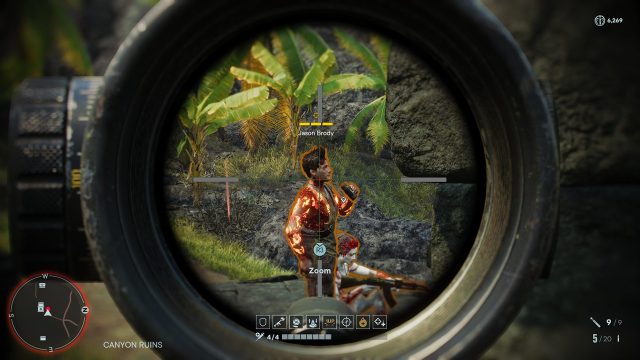 It’s not necessarily worth diving into the story moments of Vaas: Insanity in this review. There aren’t a ton (so I don’t want to spoil them), and it’s mostly a mishmash of Far Cry 3 characters, beats, and locales, albeit subverted through the lens of Vaas’ unstable mind.

If you enjoyed Vaas before, you’ll like him here. If you barely remember anything from Far Cry 3, that’s fine too. The main highlight is the scenery, which looks awesome at times — without going too far into “trippy Far Cry dreamscape” territory where it all feels too fake, or leaning too hard into nostalgia bait. And Michael Mando’s self-aware performance as Vaas is entertaining. The whole story lets loose, which suits this off-the-walls character.

I tend to prefer when Far Cry isn’t overly serious or forced, and from that perspective, I’m satisfied with Vaas: Insanity. The mystical story doesn’t get in the way of the action, and the action isn’t spread too thin across a gargantuan map. It’s all really reasonable. If you’re okay with several hours or so of playtime for a $15 DLC pack, you’ll probably dig it.

I’m not sure I’ll go back to beat it on all five Mind Level difficulty tiers (twice is enough for now), especially with more DLC packs on the way. But I am pleasantly surprised by how much I enjoyed Vaas: Insanity, and I hope I feel the same about Far Cry 6‘s next two villain stories. I’d give it a nod even if you don’t always mesh well with roguelites. Because it doesn’t outstay its welcome, the format works well for Far Cry. A lack of true variety hurts the long-term appeal after the first successful run, but that first win is exciting.