Acceptable in the Eighties

You are Rex Colt. Part man, part machine, all American. As a Mark IV cyborg on the tail of the maniacal Colonel Sloane, your mission is to destroy the Cyber Soldiers, rip out their Cyber Hearts, avoid Cyber Sharks and stop a man from becoming a Cyber God.

It would be redundant at this point to mention Far Cry 3: Blood Dragon is a tribute to everything gloriously stupid about 1980s entertainment, wouldn’t it?

I don’t know why Ubisoft decided to take this sudden and jarring direction, but I’m glad it did. 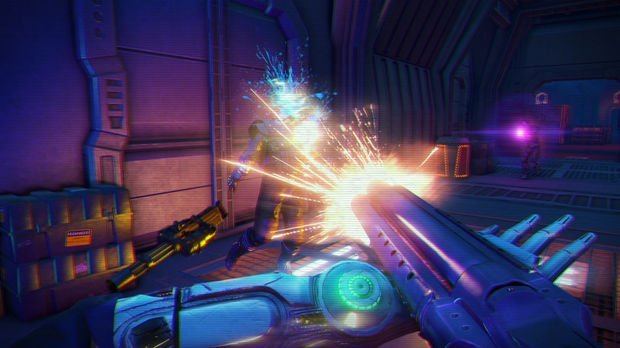 As a game, Blood Dragon plays out like a condensed version of Far Cry 3. There’s an open island to explore, but it’s tiny in comparison to what the main game offered. There’s a leveling system, but it’s linear and without customizable upgrades. There are enemy bases to liberate, animals to hunt, and optional missions to undertake, but not very many of them, and without much variety. This is all done by choice — Blood Dragon isn’t supposed to be as large as its big-budget, retail predecessor. In fact, much of the gameplay feels like little more than a vehicle for the eighties nostalgia trip — a trip Ubisoft proves itself exceptionally good at.

From the low-fi introduction to the “tracking” loading screen, Blood Dragon is an homage as loving as it is keenly observed. Cutscenes are presented as vaguely animated 8-bit images that take up less than 30% of the screen, dialog and concepts are littered with references to such classic entertainment as RoboCop, Terminator, The A-Team and the World Wrestling Federation. Collectibles include VHS tapes and bulky television sets. It’s all overdone, it’s all labored, but it’s presented with such shameless passion it comes across as remarkably heartfelt where it could have been simply cynical.

Michael Biehn provides the voice of Rex Colt, growling woeful one-liners with reckless abandon. As you may expect, the characters are all themselves parodies of typical eighties movie instigators. We have the streetwise black sidekick (who does die first), the typical love interest (who does get a cringe-inducing sex scene), and the evil war veteran gone rogue (who does provide the obligatory “A God Am I” speech).

It’s worth noting that, as over-the-top as the story is, it commits to itself with a poker face. Rather than break the fourth wall to point out how stupid they are, cutscenes instead play out as if they were genuine, without relying on nods to the viewer to get its point across. Blood Dragon is confident its audience gets the joke, and therefore plays it deliciously straight.

This commitment is not, sadly, played out so securely in the game itself. Loading screens and in-game dialog are littered with jokes that range from smirk-worthy to embarrassingly strained. Lame gags about how weapon attachments are “like strap-ons for your guns” and Colt using not one, but two versions of the “he called shotgun” quip cross the line from parody to banality. For much of the game, Blood Dragon is effortless in its preservation of the 80s style, but the mask slips when it reaches too far, especially once dialog loops and the same, less funny wisecracks are heard over and over. 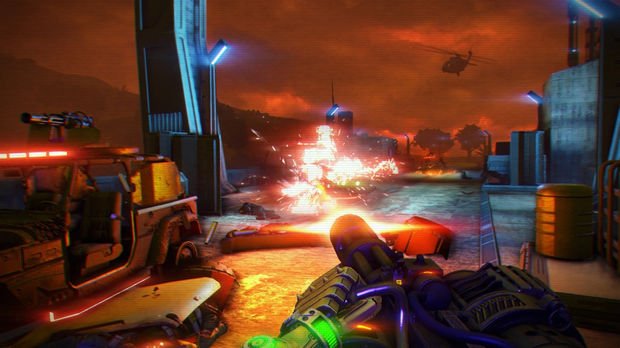 Though its comedy may be labored at times, the visual style is perfect. The red and blue color scheme, complete with scan lines over distant terrain, feels like any number of 80s science fiction films. The way Colt steadies his shotgun over his metal arm, spins ammo magazines in the air while reloading, and flips off enemies mid-combat all drip with the kind of try-hard machismo that once was the lifeblood of American entertainment. Every little detail conspires to create a believably anachronistic far-future 2007 dystopia, and it’s in such details that Blood Dragon is able to be more than a cheap plundering of the memory banks.

The soundtrack is a perfect example. Though mostly original music, the tunes are so informed by melodramatic eighties scores you’ll swear you’ve heard them all before — in a good way. Heavy synthetic drums and needlessly ominous keyboard loops pierce their way through every cutscene and action sequence, further adding a level of authentic flare, and hammering home the careful attention to detail that makes Blood Dragon more than a cheap pastiche. 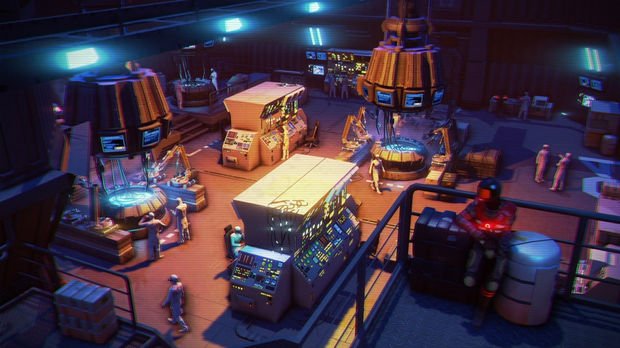 As a parody and a tribute to an era many players cherish, there’s no faulting this curious Far Cry spin-off. As a game, however, it leaves me wanting. The action is certainly solid, but really does feel like a brief whirlwind tour of the Far Cry series’ core concepts. As you unlock guns, sneak around strongholds, and tear through Cyber Soldiers with brutal takedown moves, you get the essence of a Far Cry game, but just the bare essence. The ridiculous additions of the Blood Dragon aesthetic are just that — aesthetic — with very little of the premise informing actual gameplay in any significant way.

The titular Blood Dragons offer something of a switch up, but like everything else, they’re a taster lacking in substance. Aside from a brief introduction in which Colt must sneak past the half-blind beasts and lure them to locations with enemy Cyber Hearts, the Dragons exist mostly as beefed up mooks with a tangential link to the plot. While one can theoretically lure Blood Dragons to enemy strongholds and pit them against the Cyber Soldiers, such opportunities are rare. Many is the time I lobbed a heart, even with a Dragon near, and found no useful benefit in doing so. 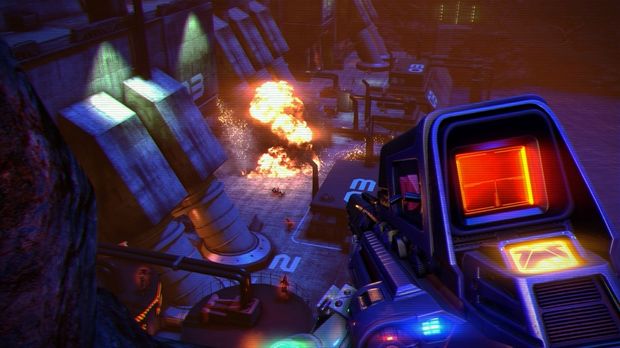