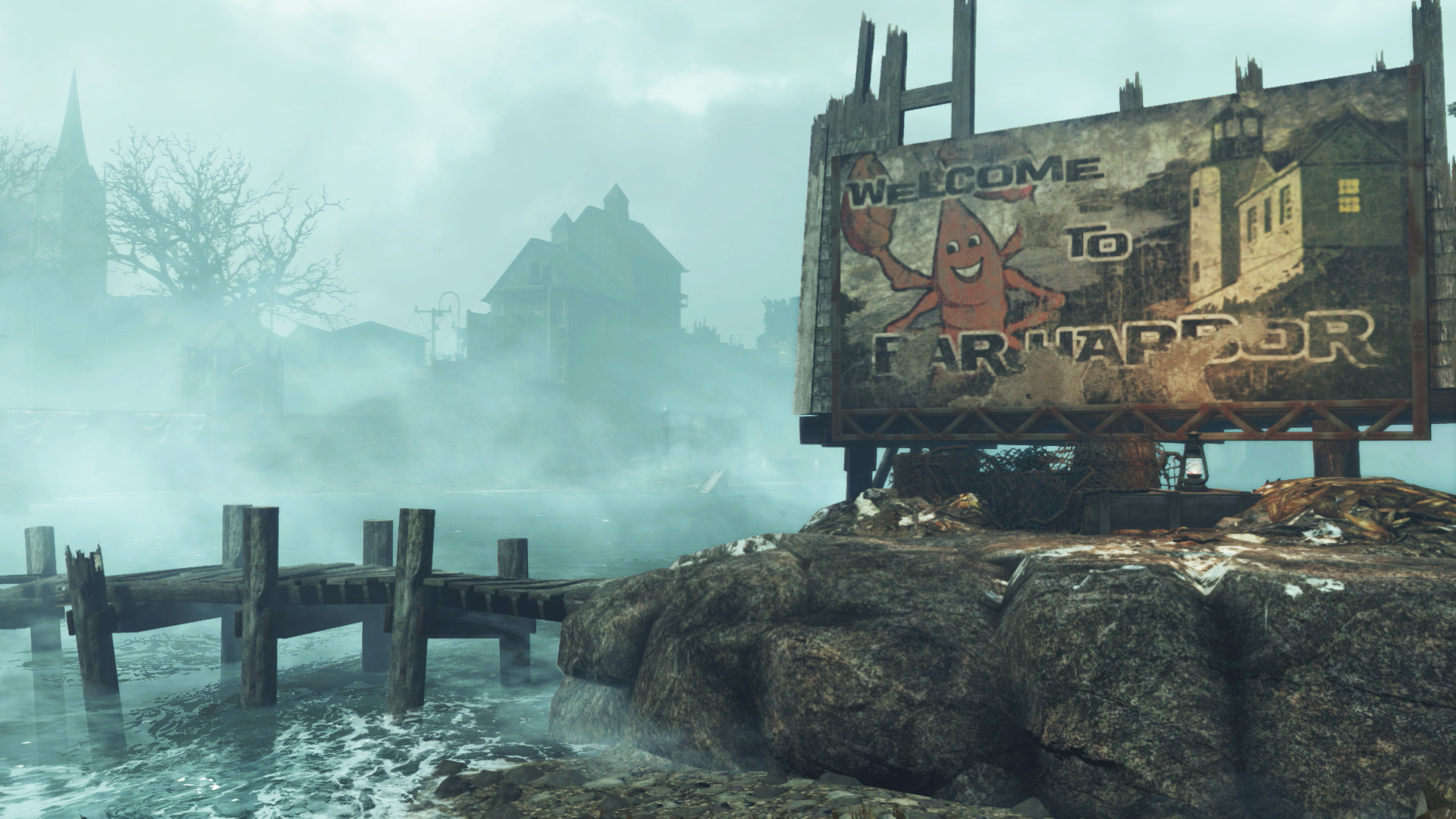 Fallout 3‘s Point Lookout is one of my favorite pieces of DLC. The trip from the heavily urbanized core of Washington, D.C. to some backwater swamps off the coast of Maryland encapsulated everything I loved about Fallout. There were strange, offbeat characters to meet, dangerous and mysterious areas to explore, and a satisfying storyline to tie together the different side quests and distractions you could take on.

Far Harbor, the first true expansion for Fallout 4, seems in many ways to be trying to reproduce that experience, perhaps a little too on the nose at times. The expansion takes a similar departure in setting, trading the dilapidated buildings and highways of Boston for a rural island community in Maine. There are again eccentric residents to meet, dangerous new enemies, and spooky areas to explore with a more supernatural bent than the main game. Hell, one dreamlike sequence seems directly lifted from the previous expansion.

Sadly, Far Harbor is a pale imitation of Point Lookout‘s accomplishments. It isn’t a terrible expansion, but it is by no means as memorable or interesting as its predecessor.

It all begins with a simple mystery. The now-familiar DLC radio announcement beckons you to the Valentine Detective Agency where you’re hired by a desperate father looking for his adult daughter who has seemingly been kidnapped (or run off) to the distant island settlement of Far Harbor. It’s strongly recommended you bring Nick the robot detective with you to get the most out of the expansion as there is some crucial story stuff for his character (for me, that meant 30 or so minutes of running around from place to place trying to find him. There should really be some way of summoning lost NPCs).

Far Harbor is a mysterious place. Almost the entire island is covered in radioactive fog and crawling with mutated monsters who thrive on the rads. I brought a suit of power armor that largely insulated me from the radiation, but you’d still do well to stock up on medical supplies before heading out.

The primary conflict on the island stems from the needs and fears of three separate, insular, equally paranoid communities. You have the harbor men, superstitious and contentious islanders, forced out of their homes due to the spreading radioactive fog. They’re squatting on a remote dock in increasingly dire straights. Then there is Arcadia, a safe haven for synths run by a prototype synth name DiMA (think Nick with a bunch of vacuum tubes and hard drives sticking out of his back) who is idolized by his followers. Arcadia seems outwardly benevolent but is quickly hinted to have a sinister side. Rounding it off are the Children of Atom, bomb-worshiping maniacs who live in an abandoned nuclear sub. They’re assholes.

Initially, I was excited by the juxtaposition of the three factions. The Children as a straight-up death-cult contrasted against the more subtle cult of personality propping up DiMA’s leadership of the synths. The fearful and backwards harbor men representing a cult of hysteria — xenophobes one bad day away from becoming a full-on militants. It’s a great setup, one ripe for swerves and twists that upset your expectations. The groundwork is also there for the factions to play on the themes of identity and uncertainty the human-replicant synths already bring to the table.

Sadly, Far Harbor doesn’t lean into any of these ideas as much as it could. The harbor men are exactly as they appear: hot-tempered rubes easily swayed by a few impressive displays or speeches. DiMA is shady, but his possible misdeeds are presented in the lightest shade of gray possible. The Children never make a case for themselves as anything other than evil. I mean, you’re first interaction with them involves two friends forced to execute each other to “prove their loyalty” to Atom; what else are you supposed to think about them?

It’s a wasted opportunity. While there are plenty of ways to approach the main quest (including options for snitching out the synth haven to the Brotherhood of Steel or the Institute, both of which will immediately lead a crusade against them), I never really felt compelled or pulled in any direction other than the obvious one. There is a clear good guy, clear bad guy, and some textbook video game simpletons who depend on you, an outsider, to fix every problem they have — from hammering some extra nails into the barricades, to patching up interpersonal rifts. It’s a wonder they lasted long enough for you to come and save them all.

The main questline is also relatively short. If you focus exclusively on the story-based missions, you can probably clean them out in an evening. The only stumbling block is a painfully long and out-of-place sequence where the game’s workshop mechanics are used to solve a series of asinine block puzzles. I have no idea what Bethesda was thinking. Who played through Fallout 4 and thought “Boy, I wish there were more reasons to interact with these clumsy, limited, unfun settlement tools. Maybe in a progress-gating, plot-relevant quest?” It immediately kills all the momentum of the story.

Thankfully, the main storyline isn’t the real draw of Far Harbor. The charm of the expansion is in the nooks and crannies of its misty, mysterious little island. It’s in the side quests that have you exploring new bizarre areas and threatening depths. It’s the peculiar brand of island insanity that has gripped the more aggressive residents, the trappers who wear helmets made out of lobster cages and try to skewer you with harpoon guns and barbed fishing poles.

Mood and atmosphere can carry me a long way in a game, and Far Harbor has these qualities in abundance. The North Eastern aesthetic of small communities living in an area of thick fog with sharp black rocks and densely overgrown forests is spot on. It provides the perfect mix of dignified civility and superstitious fear to make the new enemies and monsters that come snapping and hissing out of the fog genuinely threatening.

My level 51 character has long since passed the threshold into an invincible ubermench. He struts around in tank-like power armor, and casually dispenses hot death from a fully upgraded assault rifle. Raiders and Super Mutants are minor nuances. Still, I jumped when I was ambushed by an engorged mutant Angler fish, its mouth lined with teeth snapping at me from the dark waters. The Giant Hermit Crab (a creature so monstrously large its “shell” is a hollowed out delivery van) had me, in my invincible power armor, sprinting away from it, chucking landmines over my shoulder in a fit of blind panic.

It was nice to be scared again.

The mood of the island even seeped into my settlement habit. Yes, if you’re a freak like me and actually enjoy fiddling around with the doll house communities of Fallout 4, you’ll be pleased to know there are a few settlement opportunities in Far Harbor. There are even some new items to furnish them with (barns, drying racks, fish buckets, some new lamps).

Rather than the typically utopian settlements I design, I set my weary harbor men up in simple wood shacks, lit with lamp lights and candles. I dressed everyone in frayed sweaters, hip waders, and rain slicks instead of armor and finery. Security would be handled the old fashion way, by nervous men and women clutching lever-action rifles at their watch-posts instead of automated turrets. In my main farm, I created a dour concrete chapel at the top of the hill, looming down on the tiny, worn shacks and I stationed a reverend in it to man a clinic, dispensing chems and condemnation in equal turn. It felt appropriately Eastern Gothic, a little slice of Stephen King’s Castle Rock.

When the completion of the main quest brightened the skies and banished the fog, I regretted it immediately and reloaded from an earlier save. I missed the sad, somber little world I helped create on the island.

I share this because it is important to know that Far Harbor is partly what you make of it. The main quest is a joke you can blow right through. The new gear is mostly novelty pieces (outside of some very powerful and disgustingly high-tech-looking Marine combat armor). And while the new enemies are imaginative and horrifying, they’re still just HP bags to puncture until they stop moving.

But, if you dig deep, invest in the characters and side quests of the island, and take the time to explore its secrets and rocky coves, it can be a rewarding journey. I loved just spending time on the island. It made me wistful for vacation spots I visited in my youth and hungry for more games set in similar areas (I actually dug out my copy of Alan Wake with plans for a replay).

Sadly, I had to explore it with a painfully sub-optimal frame rate. I played through on the PS4, and areas with dense fog consistently plunged the action into a 15-20 FPS slide show. I’m not the biggest stickler for performance hiccups (I can put up with a tiny bit of slowdown or the occasional pop-up in a mostly smooth experience), but even my patience was stretched to the breaking point by the constant stuttering and hitching.

It seems like these issues are only present on the PS4 version of the game, with several Xbox One players reporting no problems and PC performance subject to the usual foibles and differences between systems. Hopefully this is a bug that will be patched (in fact some PS4 players reported no significant problems), but for now I would strongly advise PS4 players to wait for an update before taking on the DLC.

Far Harbor seems like a noble attempt at addressing some of the criticisms of Fallout 4‘s original release, but it ultimately falls short of that goal. The multiple quest outcomes and interplay between factions calls to mind what was done in New Vegas, but lacks the depth and uncertainty of those choices. The new enemies look fantastic, but in the end, act just like every other enemy of their type you’ve seen before. Bethesda has crafted a gorgeous new landscape to explore that is dripping in atmosphere and style, but technical glitches bog down the experience.

If you are absolutely starving for more Fallout 4 content, Far Harbor will give you another impressively large landscape to explore and some great side content to dig into. If you were already tired of Fallout 4 and hoping the expansion would provide something unique enough to justify coming back, this isn’t it.