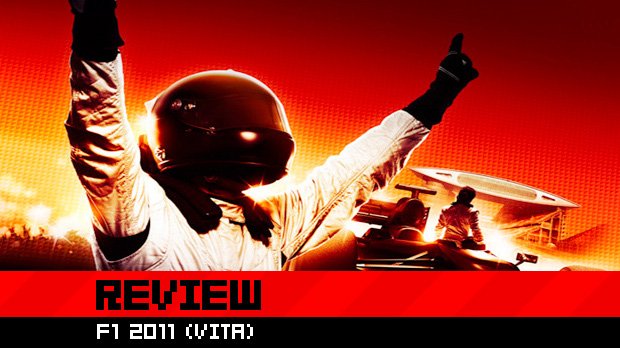 I love arcade racing games. The sense of speed, the excitement of hairpin turns, and the hum of the engine get my blood pumping in a fast and fun way. Racing sims can offer the same enjoyment yet allow for more customization of cars, tuning, and a greater scope of the races and the racing industry.

F1 2011 is a racing sim, and as such, offers a wide variety of modes and things to do. Will it satisfy the arcade racing fans as well as those looking for a deeper simulation on the PlayStation Vita? 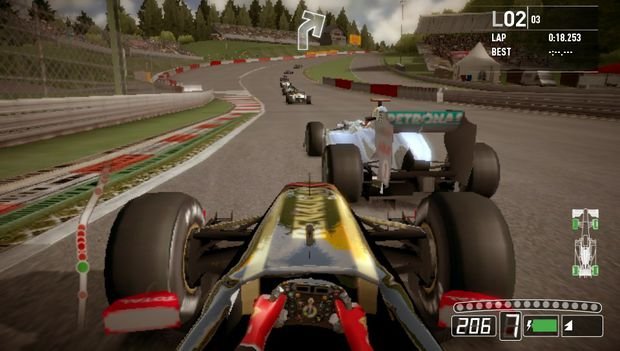 When you first boot up the title, the opening cinematic showcases exciting races, celebratory cut scenes, and bright, vibrant graphics. It’s only after starting up a race that you realize that this footage is directly ported from the home console version and does not reflect the product you are now playing. To put it simply, F1 on Vita is not a good showcase for the graphical capabilities of the system. In fact, that opening cinematic is doubly misleading, as the CG racers are nowhere to be seen in the handheld version at all outside that intro movie.

For most people — especially for those playing a portable racing title — this isn’t a big deal, and it wasn’t for me either. It was just a bit jarring at first to expect such crispness and detail and then seeing what the game actually offered. When in the game proper, players will experience the best and sharpest-looking menu screens a racing fan could ever ask for … if a racing fan wanted menu screens, that is. When it comes to the actual game, however, that’s something else entirely.

The sharpness of the opening cinematic gives way to muddy, pixelated cars with very little detail, even in cockpit mode. The courses are bland, spectator-less ghost villages that somehow have the sounds of screaming fans. It’s as if they took the home version and weren’t fully convinced they could fit all the content onto the portable version. At least it looks better than the 3DS port. 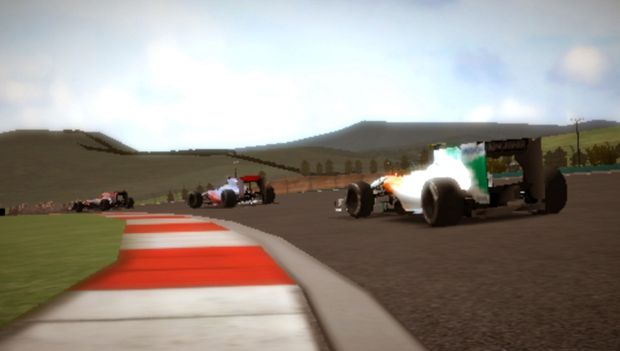 That said, there is a remarkable amount of content here. Single races, tournaments, time trails, challenges, and the three-season, 60-race career mode are all here for Formula 1 fans to enjoy, though again, I use “enjoy” as a loose term. Each vehicle seems to handle the same, and races don’t seem to offer the same visual feel as the speed of the cars ought to be expressing. Career mode itself is fairly deep — players begin as an unknown racer working their way to the championship through trials and race auditions for different teams. Still, there’s an awful lot of time spent navigating menus and clicking the “advance time” button to move things along.

So, there’s a lot to do but not a lot of fun to be had while doing it. F1 2011 seems to have been scaled down in every way except the raw content count, and that may have hurt the game in the long run. Races have no music, each engine sounds the same as the last, and the controls are atrocious (I can’t count the number of times I turned the wheel only to see my vehicle continue straight down its original path). One wonders what racing fan would enjoy this at all. Sure, there are plenty of single-player and online modes, but who wants to experience them in such a watered-down format?

F1 fans will be drawn in by the licensed racers and circuits from the 2011 Formula 1 season, the idea of using the DRS rear-wing control, and KERS boosting abilities. They may even be entranced by the depth of the career mode or the number of race options both online and off. But when it comes down to the presentation — endless menus, muted graphics, and the races themselves — many will lose interest in F1 2011 very quickly.