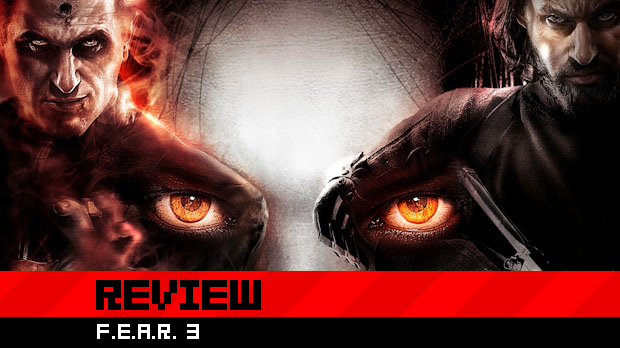 The F.E.A.R. series has always been a polarizing one. It’s earned itself a dedicated cult following but for every fan, there’s at least one vocal detractor. Personally, I’ve always been an admirer of the series, well aware of its faults but respectful of the atmosphere and twisted narrative it’s become known for.

My anticipation for F.E.A.R. 3 was very high and I’m pleased to announce that this is quite possibly the best game in the series so far. 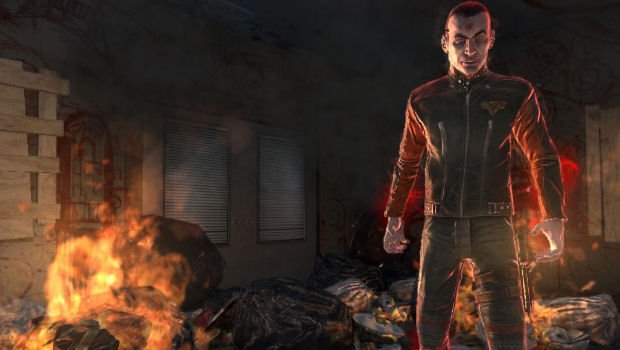 If this is your first F.E.A.R. game, you’ll need some Wikipedia pages handy, because Day 1 Studios simply does not care. Taking place months after the events of the first game, F.E.A.R. 3 continues the Point Man’s story as he finds himself imprisoned by Armacham and tortured for information. He is rescued by an unlikely accomplice — his cannibal brother Paxton Fettel, who was killed by the Point Man in the first game.

If you’re not with me so far, I wouldn’t recommend jumping into this game, because you’ll be lost for the entirety of the game.

Back to the story, it turns out that Fettel’s psychic ties to Alma (scary girl, human test subject, telekinetic rapist) and the Point Man was too strong for him to die, so now he exists as a wraith-like spirit, bound to his brother and harboring his own twisted agenda concerning his brother and Alma’s upcoming baby. Thus the stage is set for a new co-op take on the F.E.A.R. series.

It’s clear from the outset that F.E.A.R. 3 is intended as a purely co-op situation. The battles are designed for two players to distract and flank enemies, with odds that can sometimes prove overwhelming for solo combatants. While you can play single-player, you miss out on a vast proportion of the game — the secondary player character, be it Point Man or Fettel, will be removed from gameplay, not even available as an A.I. partner. It’s a strange decision, so be warned that if you choose to go it alone, you won’t get the full game.

The Point Man’s style of play remains largely unchanged from previous titles in the series. As the more corporeal of the two characters, he can access any gun that’s lying around and he can also make use of Reflexes — a fancy way of saying he can slow down time temporarily. Being human, the Point Man offers a more traditional approach to combat.

Meanwhile, Fettel is the choice for true sadists. With the former antagonist, players can possess enemies, gaining control of their physical form and being able to essentially fight like the Point Man (sans Reflexes). As well as possession, he can suspend opponents in the air via a ghostly thread, shoot energy projectiles, telekinetically fling grenades, and make unfortunate victims explode. With all this power at his disposal, one can expect a fair few fights between friends over who gets to play the ghastlier brother. 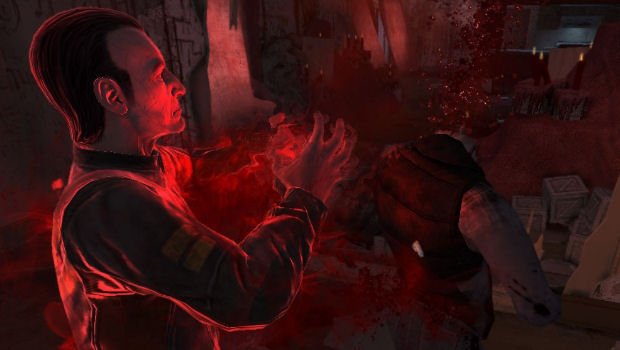 Day 1 Studios did a tremendous job of building upon previous games and adding a new level of speed and intensity to the combat. Although F.E.A.R. 3 is considerably less scary than its predecessors due to the co-op gameplay and an increased level of action, there is still a healthy dose of foreboding atmosphere, and there’s a level of quality in the shooting mechanics and overall presentation that past entries lacked. In many ways, it takes elements of modern military shooters such as Call of Duty and drapes a horror vibe over the framework. The results are quite pleasant to behold.

F.E.A.R. 3 has a greater focus on story, better visuals, and a more thrilling execution than the series has ever seen, yet while I want to call it the best F.E.A.R. yet, I’m very sad to say that for everything done right, there are two things that have been done atrociously wrong.

For a start, F.E.A.R. 3 is so focused on multiplayer that the campaign has been clearly compromised. At a generous guess, I will say the story took me five hours to complete, but I am certain it was shorter than that. In fact, the game’s story really ramps up in the last thirty minutes, to the point where the game is over before it felt that things got properly started. 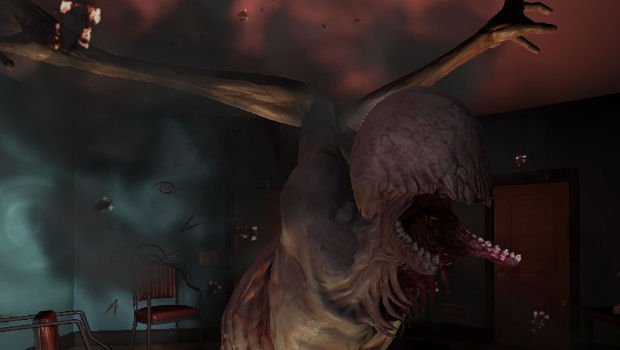 The co-op itself is also incredibly stunted. You can’t choose characters freely or swap them between levels. The host always starts as Point Man and whoever joins gets to be Fettel. To make matters more obnoxious, there’s no drop-in/drop-out feature, something I consider a crime for any narrative-driven co-op game. F.E.A.R. 3 tries to make things more interesting by adding a level of competition, with players able to complete objectives in order to become Alma’s “favorite son.” F.E.A.R. 3 is so bad at player feedback, however, that it’s never really explained how best to earn points and become the winner. Not to mention, Fettel has more skills at his disposal and it’s far easier for him to win every time.

The lacking amount of feedback is also evident in the rather poor level design, which fails to be intuitive despite the game’s linearity. If co-op is useful for one thing, it’s that you get to have two people testing all of the identical doors to see which one is the actual exit.

All of this could be easily forgiven, though, had the campaign not been so thoroughly shafted in order for perhaps the sloppiest, most miserable multiplayer system I have had the displeasure of suffering in a long while. That F.E.A.R. — a series that made its mark with excellent narrative campaigns — chose to cut its campaign short for a buggy, crimped, broken multiplayer delivery fills me with a disgust so strong it could almost gain a physical form. 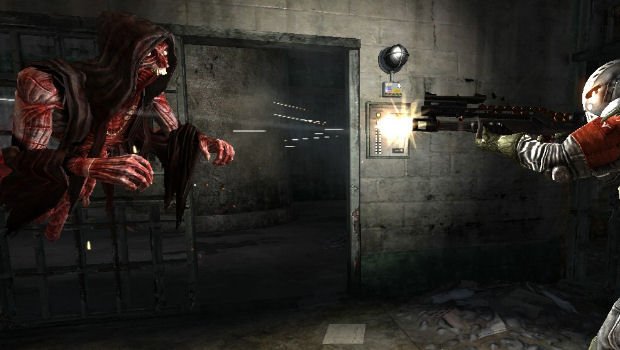 Let’s ignore the galling online pass feature that refuses to download half the multiplayer features unless you exit the entire game, and focus on just how awful the netcode is. For instance, the Quick Match option doesn’t work. At all. It simply sits with a perpetual loading animation that cannot be backed out of until the player gets bored and exits the game.

Then there’s the matchmaking. While some players have reported being able to get into games, I was among the many others that could not. The most irritating part of this is that when you get an inevitable “No Available Slots” or “Unable To Join Game” message, you’re booted out of the entire matchmaking menu and have to get back into it from the main menu. The reason for such backward design lies outside of my clearly limited grasp of human logic, but someone saw fit to make it this way.

I was finally able to get into games by hosting them myself, although there don’t seem to be many players online so full games were rather rare. So far, hosting has proven to be my only way into an online game, with Quick Match trapping players in Loading Limbo and game searching leading to failed join attempts and menu booting. 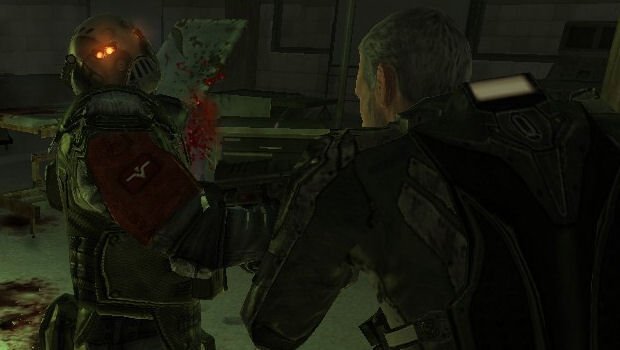 The truly upsetting part is that there is a truly great multiplayer game hiding behind the wall of bullshit. F.E.A.R. 3‘s multiplayer eschews traditional deathmatch gametypes for a range of interesting and unique modes, with each one proving to be incredibly fun in its own right.

Contractions is the most traditional mode, being a “horde” style affair where four players team up against waves of increasingly difficult enemies. Between rounds, team members can find supply crates to bring back to base and repair defensive barricades to keep enemies out. Alma will also wander the map, with a stiff penalty paid to anybody unfortunate enough to look at her.

Soul Survivor is perhaps the weakest of the four modes, being an elimination game in which one player is a wraith and has to “corrupt” downed players in order to boost his own side. Enemy soldiers flood the map, which wraiths can possess at any time. While it’s a decent idea, the game can get pretty dull, especially for the lone wraith player until he can win some team members. 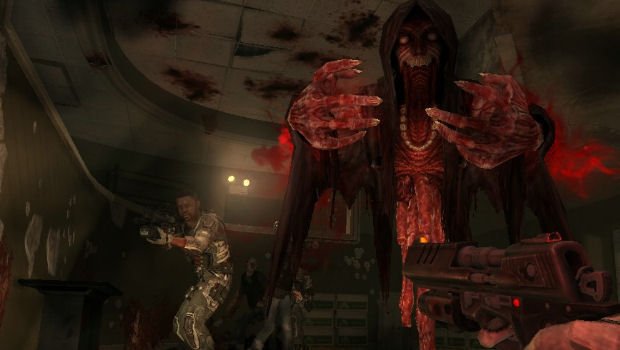 F**king Run is a panic-inducing game in which four players have to keep moving and shooting at opponents, chased all the while by a wall of darkness. Staying in the darkness for too long causes a player to be consumed, and if just one player falls, the whole team loses. It’s a frantic and particularly engaging experience, although I feel it would last a bit longer if the game relied on elimination rather than ending if one player falls. That said, I can see how it encourages team work rather than having players abandon their allies and run ahead.

Finally, we have my favorite mode, Soul King. In this match, all players are wraiths and they face off against A.I. enemies, all of which can be possessed. Killing an enemy causes them to drop a soul which is collected for points. Players can also kill each other to steal vast quantities of souls, and therein lies the true trick of the game. The better you do, the greater your losses upon death. It’s a fascinating game with a great risk/reward dynamic that keeps winners unpredictable until the very end. It’s helped along by the amusingly cheesy wraith voice acting, too.

Every single mode has merit and F.E.A.R. 3 boasts one of the most unique online offerings I’ve ever seen, yet all of it is pissed on by the aforementioned connection trouble, broken matchmaking and poorly designed menu system. When one can get into a game, it’s great fun, but the fact that getting there is such a hassle is simply inexcusable. It’s clear that Day 1 Studios intended this game to rely heavily on the multiplayer component, couldn’t meet even basic standards and has wrecked what is, at its core, a superb game. Even if the connection issues and infinite loading bugs are patched, so few are playing now and the menu is so badly put together that any matchmaking experience is destined to remain unpleasant. 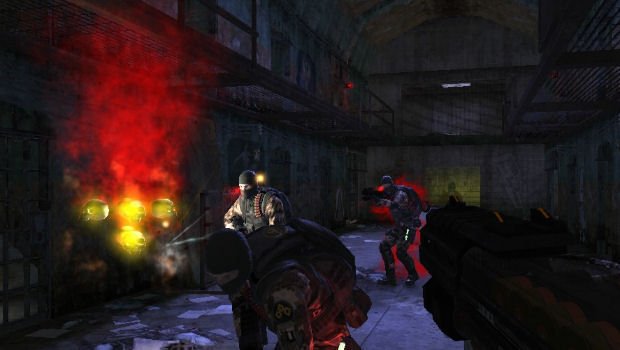 I don’t often talk about review scores within the text of a review, but I want to make this abundantly clear — I think F.E.A.R. 3 is a 9/10 game at heart. The quality of gameplay is on par with some of the best games that the first-person shooter genre has to offer, and I feel that this is the game that should have put the series on the map. Unfortunately, I cannot in good faith give this game the score it should get due to how badly the developers screwed it up. It deserves merit for the gameplay that’s offered while it lasts and while it works, but turning that “9” upside down is the best I can do.

Thanks to its pathetically short campaign, dodgy co-op setup and broken multiplayer matchmaking, F.E.A.R. 3 is one of the best shooters I’ve played presented in the worst possible way. It pains me to have to be so harsh, but there’s simply no justification for how this game’s excellence has been squandered and ultimately ruined. If you can’t get your online shit together, don’t give me a compromised narrative, because right now, F.E.A.R 3 feels like half a game and one that’s simply not worth paying anywhere near full price for.

Never has such a fantastic experience been ruined so tragically.