I’m out in the wilderness. I’ve spent all my money on medicine, and I’m already out of it. My followers’ various debilitating conditions are becoming worse by the day and I am unable to further assist them in recuperating. Each night, I pray that we don’t get ambushed by bandits, because there’s no way we’d be able to stand up to them; not in this condition. I can’t imagine it’s long before they start thinking of mutiny.

And I’m on Normal difficulty. 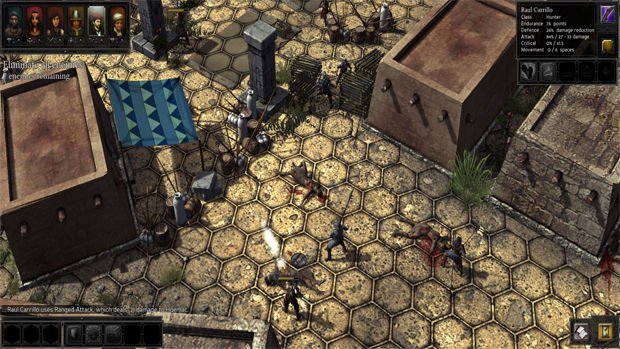 The campaign in Expeditions: Conquistador consists of two sections, one in Hispaniola (the Caribbean) and one in Mexico (Central America). The story naturally has you and your chosen followers getting mixed up in a variety of conflicts, each with a slew of possible solutions. There is a lot of reading to do, but thankfully the writing is superb. It truly is a joy to read each interaction between characters and to see where exactly the plot will go next, which of course depends on the difficult decisions made by the player as well as their performance during the battles.

The game starts by naming the lead character and choosing followers to assist in the journey. These followers will be companions in and outside of battle. Each individual has their own class like Soldier or Doctor, as well as three personality traits like Proud, Racist, or Pious. These traits affect how the individuals gain and lose morale. For example, a Cautious person will lose morale if you, as the leader, charge right into a battle instead of waiting a bit to assess the situation. Picking followers, then, becomes an intricate challenge since it is ideal to have as little conflict as possible among team members.

While traveling around the world, the characters will need to set up camp after a certain amount of time in order to rest. As the player, coordinating an optimal camp plays out sort of like a mini-game in itself. Certain followers will be better at certain campsite duties like hunting, keeping watch, or gathering food, and it is no easy task to make sure everything goes smoothly. Where the camp is set up also matters — for example, hunkering down in the middle of the path will yield a higher chance of your squad being raided by bandits. This also marks the passage of time, another thorn in the player’s side as followers become hungry, sick, and irate if not cared for.

Battles play out in the classic turn-based strategy game fashion. Instead of a square-based grid like in Final Fantasy Tactics or Fire Emblem, however, Expeditions: Conquistador utilizes a hex-based grid, allowing for a greater range of movements and tactics. Mission objectives generally require the player to either destroy the opposition or simply survive for a certain amount of turns. Each of the various classes functions uniquely on the battlefield, from the amount of movement spaces they can travel to what special combat abilities they possess.

Battles are anything but a cakewalk. In fact, during the first half of the game, I’m not sure that I won a single major battle. It may have had to do with my ill-preparedness, as it is possible to construct traps and barricades before engaging in certain fights and … I didn’t. I was so concerned with so many other things that I was consistently low on currency and simply couldn’t afford to purchase the required materials for these things! Being a conquistador ain’t easy.

The crutch behind Conquistador‘s storytelling and difficulty is the fact that it is perfectly okay to fail. Even though I lost most of the major battles (on Normal difficulty, remember), the story kept on going and even recognized my failures. I pissed off a lot of people in the process, but I didn’t feel compelled — or even worse, forced — to reload my save game from before the battle just to try to win. Sure, my people lost morale and were injured, but the game continued on.

It also makes every battle less stressful. Going into each battle knowing that it’s okay to lose removes a lot of anxiety that would normally come with such difficult games. Instead of wanting to win simply because it is required, players are now intrinsically motivated to achieve victory. They want to win because virtual people are depending on them — both their motley band of followers as well as the locals who enlisted their help.

The difficulty does start to wear on the player, however. I don’t feel as if I’m getting any better or having a deeper understanding of the combat mechanics, since once I lose, that battle is now behind me and I’m moving on. I found it harder and harder to get better as the story progressed — more difficult battles were being thrown my way when I still wasn’t necessarily sure why I lost the previous ones. A better difficulty curve would have been more than helpful in this regard.

There is an option for multiplayer, though you’ll need to arrange something if you want to play against an actual human, since there never seem to be any hosted games online. It also supports local hotseat-style multiplayer, where two players can go head-to-head using the same computer.

The in-game art is nice on the eyes, but it’s the music that really shines. The perfect instruments are used to give Conquistador a wild, yet cultured vibe that really stands out. Many times I found myself not moving in-game, and just listening to the music being played and getting absorbed in it. The cutscenes do an okay job of telling the story, but the voice-overs isn’t exactly stellar. 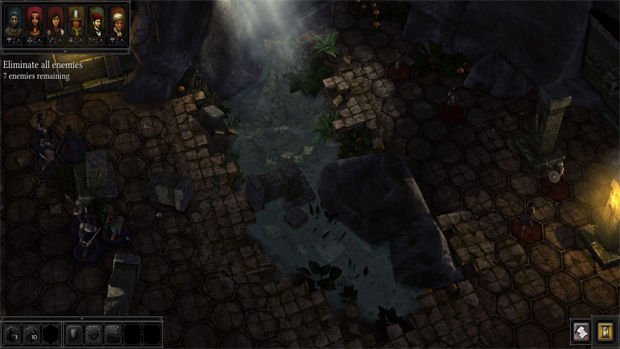 Expeditions: Conquistador is a hard game, because being alive during the time in which it takes place was hard. It’s no easy feat to survive the harsh wilderness with an entire team depending on you for treatment and food, all the while waging war on enemy troops and unpredictable bandits.

I do wish that the game eased up a bit in the early-goings instead of using the trial-by-fire approach that seems to be in place currently, as such an approach would’ve allowed the player to get better acquainted with the deep and intelligent battle system. At the very least, Conquistador‘s acceptance of player failure makes it possible to experience its excellent writing.