Emily is Away wasn’t the first visual novel I had ever played, but one of the few to transport me into a period of my life I thought I left behind. Maybe that was due more to the accurate recreation of Windows XP and AOL Instant Messenger from 2002 (even if it was in pixel art), but I had experienced many of the same scenarios the game covered.

It was heartbreaking to see my own mistakes and know what I could have done to prevent them. By that same measure, it made me realize that I’m not the only person to have felt the same way in such a situation, even if I beat myself up over my choices every day.

It wasn’t perfect (the characters were basically one-dimensional), but Emily is Away was effective in at least capturing a time period that seemed to disappear overnight. So what could a sequel possibly add to that? How about two potential love interests and multiple endings! 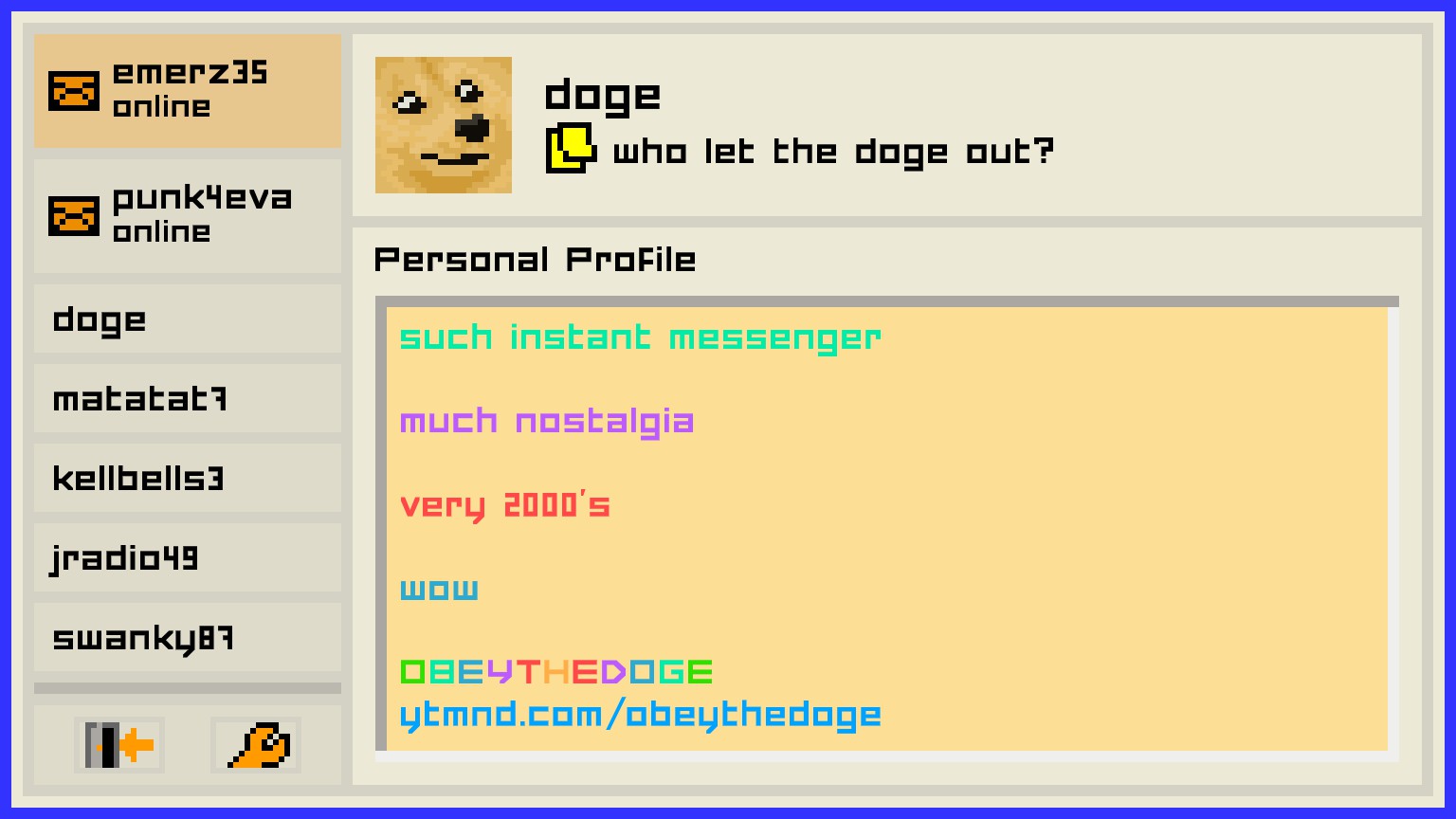 The biggest change to the narrative design in Emily is Away Too is that you have more direct control over the branching paths. Choices you make in conversations with Emily and Evelyn, the two ladies of interest, will see you either ending up with one of them or ending up alone. While it’s easy to replay a chapter and get the exact outcome you want, robbing the game of any dramatic effect, at least you can be an active part of the plotline and avoid some of the negative aspects that plagued the first game (specifically, the scene where you may have unintentionally raped Emily).

The other big change comes in the form of an interactive recreation of 2006 Internet with Emilyisaway.com. The game now acts more like how AOL Instant Messenger was; what I mean is, everything you do in the game is through the guise of an instant messenger window instead of a recreation of a desktop with the application.

There are parts throughout the story where Emily or Evelyn will send you links to their “Facenook” pages or “YouToob” videos and those work through your own browser (which I suppose means the game requires an internet connection). They also send chat logs and homework to you that will dump to your actual desktop for you to look at. If you want, you can even browse through YTMND and find hilariously stupid videos from 2006. It definitely creates a much more authentic experience of the time period, though I’m not entirely sure why this couldn’t be contained within the application.

I suppose this was more to accurately recreate how chat clients worked, but there were a few times where I got confused on what I was clicking on my desktop and launched Hearthstone while trying to look over Emily’s art homework. My stupidity aside, it’s certainly a neat touch and tickles the nostalgia bone a lot more than the first game did.

One small tweak helps the game feel more playable, as well. One of the gimmicks in the first title was how you had to type randomly on your keyboard for messages to appear on screen. You can now just select an autotype function, letting it fill in the text after you make a selection. It helps cut down on the monotony of replaying the game, which at least yields something this time.

All of this is window dressing to the main content of the game: how the story plays out. I definitely made a connection with the original, but it was mostly through a projection of feelings I had experienced at a similar time. It was worth a playthrough, but does it stand up as good narrative design? Not entirely. It’s nice to see Emily is Away Too improve on that front. 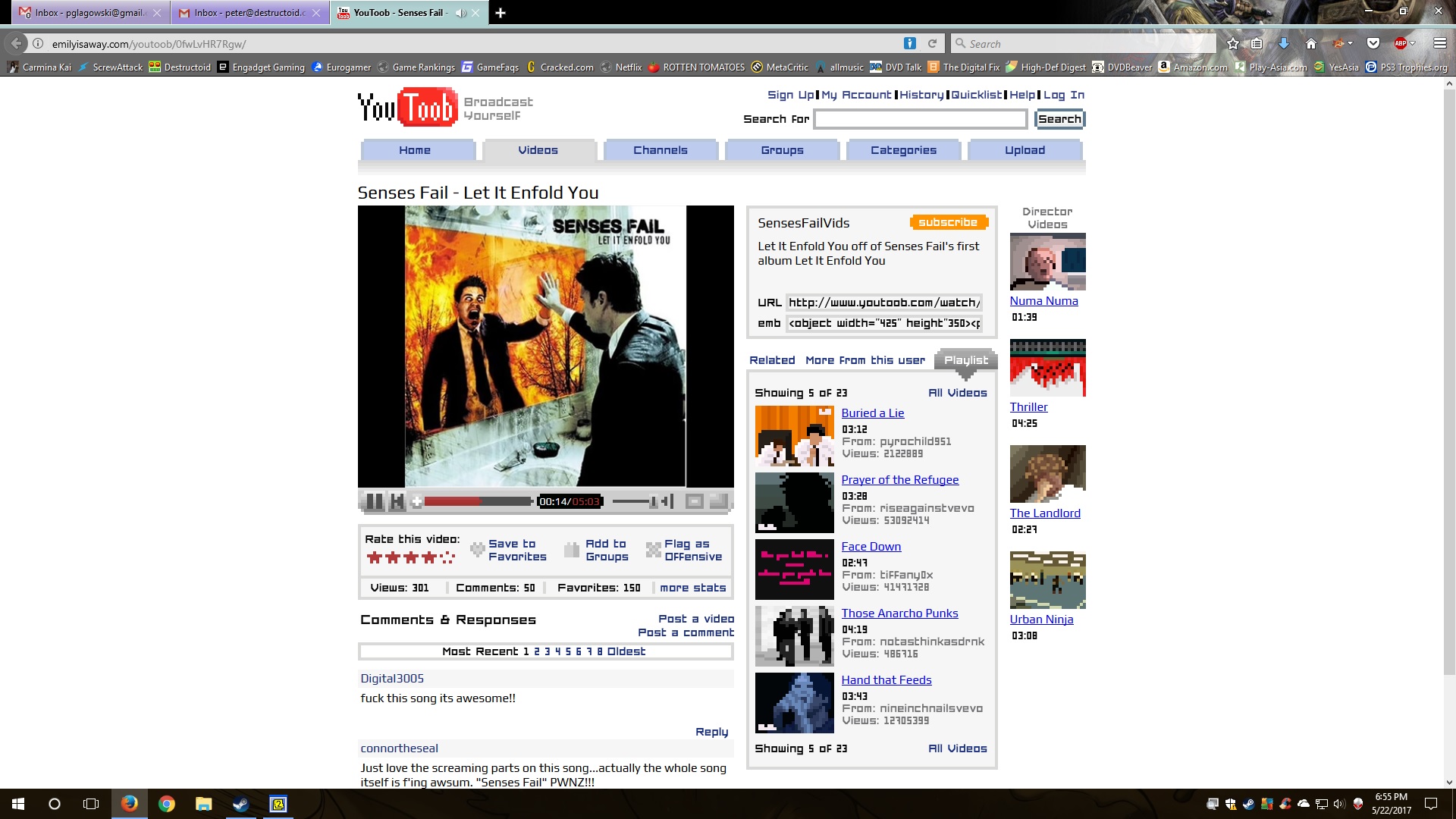 I’ve already mentioned the branching paths, but having the ability to chat with multiple people is nice. It stops the protagonist from feeling like a single-minded stalker and it even creates a scenario in which you’re trying your hardest to console both women while they are going through a crisis. You’re going to have to let someone down and it sucks doing that.

Still, the personalities are pretty thin. Emily is Away Too is told through instant messages, so there isn’t a lot of room to write fully fleshed-out exchanges, but you don’t quite get to learn much about Emily or Evelyn throughout the five chapters. There are still the same tired scenarios where both girls are complaining about their boyfriends and you can send messages like, “I never liked that guy,” effectively painting yourself as Mr. Nice Guy. By that measure, though, Emily or Evelyn will call you out on your lies if you happen to try and manipulate them, so you can’t get a “good” ending while being a dismissive ass.

The lack of control over your character’s identity is also a bit odd. When you start each chapter, you get some choices to create an AOL profile, but nothing really applies to what I consider myself to be. You get asked the question of, “What is your favorite type of music?,” but I can’t pick heavy metal (despite there being a buddy icon for Tool). I know that he is supposed to be an individual with his own wants and needs, but if I’m naming him after myself, why can’t I also have ultimate control over what he enjoys? 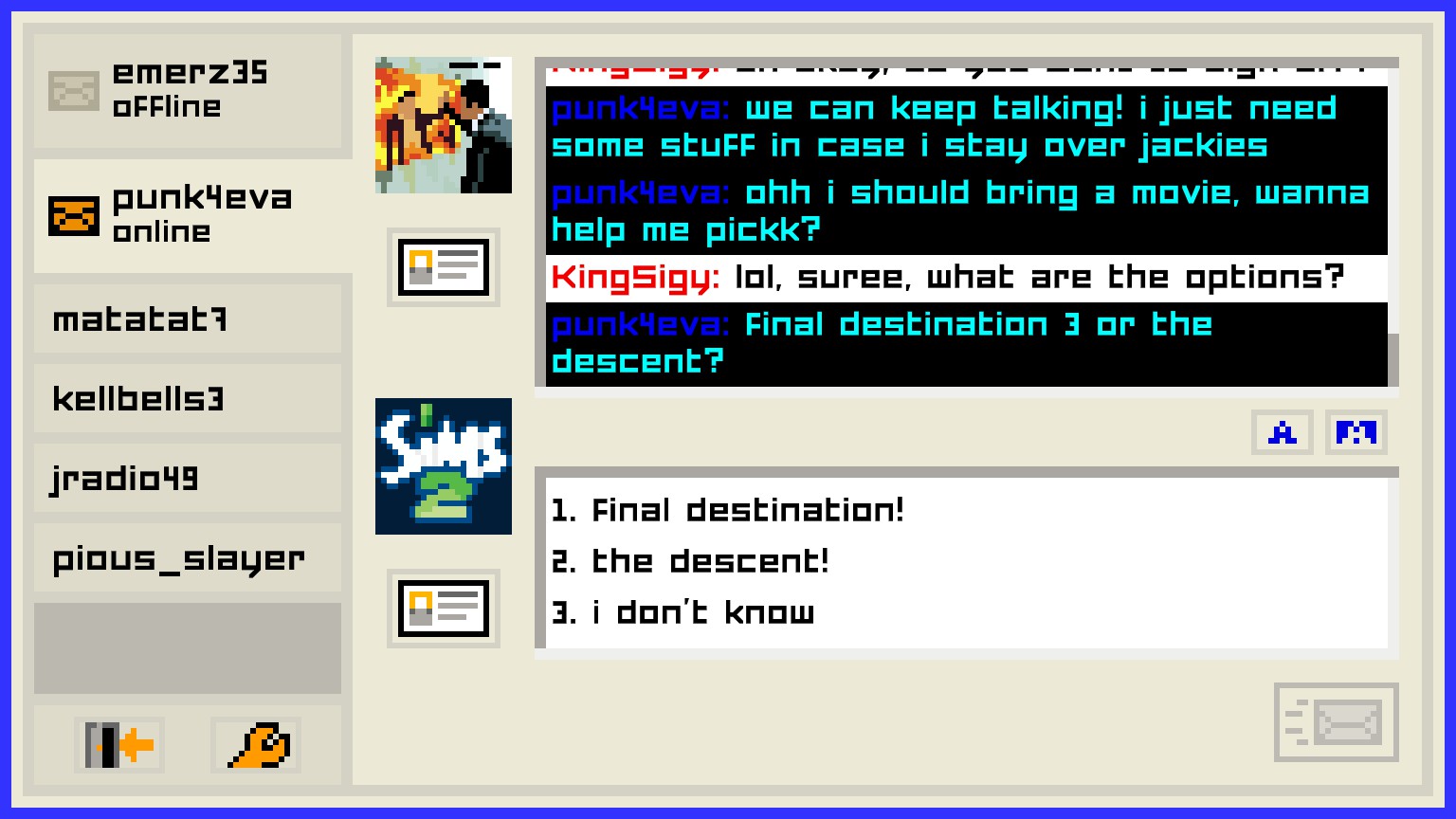 For that matter, there is no option to play as a female. That isn’t the biggest issue for me, but it might turn some people off. Stories are meant to have a clear focus, though, and not be a catch-all for everyone at all times. It would be interesting to see this structure applied to LGBTQ relationships, but maybe that could be part of what defines Emily is Away Three in the future. It certainly is strange to put in a female name and get treated like a man, though.

Those complaints aside, Emily is Away Too is basically the first game expanded beyond a simple gimmick. It may not be the best piece of interactive fiction ever created, but quality-of-life changes to the original formula make the journey feel more personal for individual players. The multiple endings really seal the deal, meaning you’re in for heartbreak or everlasting love.

The low price of admission is also nice, since spending $5 is hardly what I’d call expensive. I don’t know if I care for choose-your-own-adventure games (they, effectively, have no drama), but Emily is Away Too does enough right to make it easy to recommend.

Now, excuse me while I browse through YTMND and relive “Safety Not Guaranteed.“